Read After the Sky Fell Down Online

After the Sky Fell Down 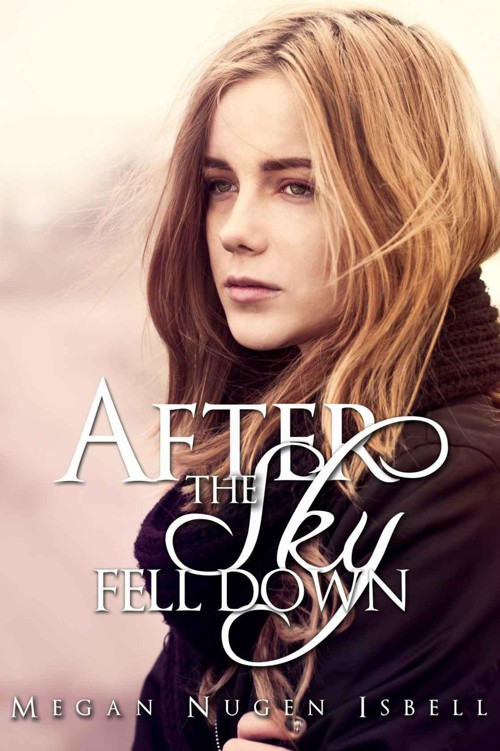 After the Sky Fell Down

“
Where is my wallet?  He is going to kill me.  Why do I lose everything?”
Kathryn’s thoughts ran through her mind as she searched frantically through her apartment, lifting up magazines and digging through the couch cushions.  The wallet couldn’t have just disappeared.  She’d had it just a few hours ago, but now it was gone.  This was her life though and always had been.  Her mom had often said she’d forget her head if it wasn’t attached to her body.  No matter how she tried to be organized, it just wasn’t going to happen, not in this lifetime anyway.

“Lacey, have you seen my wallet?” Kathryn called to her roommate who was heating up macaroni and cheese.

“Nope, but tell me if you come across mine,” Lacey said nonchalantly in the typical Lacey fashion.  She was a great roommate and friend, but even more absentminded than Kathryn.

Frustrated, she sighed and continued her search in the bedroom.  As she looked, the doorbell rang and her head jerked up from the precarious position she was now in.  Her body lay flat against the beige carpet where she had been searching for the wallet under her bed.  She hadn’t found anything, unless dust bunnies counted.  She jumped up and dusted the carpet remnants from the black dress she was wearing.

She straightened her dress, smoothed her hair and walked into the l
iving room where Ben was waiting.

“Hey,” she said, reaching up and kissing him on the cheek.

“You look nice,” he said as his eyes spanned the length of her body.

“So do you,” Kathryn said, returning the compliment.  She took a second and admired her boyfriend, who she had
to admit was handsome.  He always kept his dark blonde hair short and neat and he always dressed to the tee.  Tonight he was wearing a pair of pressed khakis and a maroon polo shirt.  She thought briefly of how much he had changed from when they first started dating three years ago, when they were both sixteen.  At nineteen, Ben had grown taller and filled out.  Unfortunately, she had not followed suit and he now towered over her by nearly a foot.  She was barely five foot three inches tall, and that was with heels.  One thing that had not changed though was his eyes.  His hazel eyes had remained the same and as she stood in front of him, they seemed to smile at her.

“She lost her wallet again,” Lacey called from the kitchen.

Kathryn noticed Ben roll his eyes.
He should be used to this by now,
she thought.

“You lost it again?”

“You’ve looked everywhere?” he asked doubtfully.  She
nodded and then he bent down. “Obviously not very hard and apparently not behind the couch,” he said standing upright again, the small pink wallet in his hand.

“I could do without your commentary,” she snickered, reaching for the wallet.

“What would you do without me?” he asked once she was holding it.

“You’re awfully full of yourself.”

“I would hardly call finding my wallet
rescuing
me.  I think you’re just hiding all this stuff from me so you can swoop in and save the day.”

“I guess you figured out my master plan,” he snickered and then asked, “Are you ready to go now?  The movie’s gonna start soon.”

“Yes, I’m ready.  God forbid we miss the previews,” she said rolling her eyes while reaching over and grabbing her sweater, which lay over the arm of the couch.

“It’s not about the previews Kat
hryn, it’s about being on time, which is something I think you’re completely incapable of,” he said as he grinned at her.

“You have no idea what I’m capable of,” she smirked back and then looked toward the couch. “Bye Lacey. Don’t wait up.”

“Wasn’t planning on it,” she said through a mouthful of macaroni.

“I love you too,” Kathryn said sarcastically and followed Ben out the door.

They walked into the cool night air and over to Ben’s blue Chevy truck.  He opened the door and then helped her climb inside.

“Are you ever gonna get rid of this thing?” she complained to him as she placed her foot on the running board.  “You know it’s impossible for me to get in and out of it.”

“Are you ever gonna to grow?” he asked sarcastically.

“No, I’m never going to get rid of it, but if I ever did, I’d only trade it in for something even bigger.  Perhaps I’ll just get rid of you instead.”

She playfully stuck her tongue out at him and before she could close the door, he reached up and pulled her to him.  She pretended to fight him off, but he didn’t relent, and when his lips met hers, she didn’t resist anymore, she’d never been able to resist him.

“I love you,” he said pulling back with a confident smile.

Kathryn just
grinned back at him and closed the door.

“Okay, I definitely get to pick the movie next time,” Kathryn laughed as they drove away from the theater.

“Um, yeah, Ben, it
was
that bad.  I knew a movie with Seth Rogan was bound to be awful, but that was actually terrible.”

“You’re just being dramatic,” he laughed as he reached over and grabbed her hand.

“I am not.  I think I’d rather drive a nail through my head than watch that again.”

“Not really.  That movie was horrible,” she countered.

“Well, don’t go making any drastic decisions about anything to do with nails and your head because you won’t have to watch it again,” he said lifting her hand to his lips and kissing the top of it.  “And you can pick the movie next time.”

“I hope you don’t mind that we’re swinging by my grandparents’ house.”

“No, not at all,” she said. “I think it’s cute she still makes you your favorite cookies.”

“Well, when she called and said she’d made a batch, I couldn’t wait for her to bring them to dinner tomorrow.  They’re never as good the second day,” he said and when she looked over at him, he had a childish grin spread across his face.

“Whatever we need to do to keep you happy.”

She just laughed and reached over and turned up the volume on the stereo.  She wasn’t surprised to hear a U2 mix in the CD player and they listened to the music until they pulled up to his grandparents’ small ranch-style house.

When they got to the front door, Ben knocked, but didn’t wait for an answer.

“Grandma?  Grandpa?” he called as they walked inside.

“In here Ben,” the slight voice of Grandma Val called.

Kathryn f
ollowed him into the living room, where his grandparents were watching TV.  Grandma Val set her knitting down beside her when they walked in and Grandpa Dom muted the volume.

“Hey you two,” Grandpa Dom said looking over at them with a smile.

“It’s so good to see you both,” Val said easing herself up from the couch and walking over to them.  She leaned over to hug Ben and then Kathryn.

“It’s good to see you too,” she said as the old woman held her.

Val let go and then gently grabbed Kathryn’s left hand and looked down at her ring finger and began shaking her head.

“Still no ring, I see.”  Kathryn was used to this.  Grandma Val had been intent on seeing she and Ben get married as soon as they walked across the stage at high school graduation.

“You’ll be twenty in February.”

“You’ve got to stop pressuring me Grandma.  When I finally do ask her, she won’t know if it’s because I want to or you want me to,” Ben said and then winked at Kathryn.

“You’re right, Be
nny,” Grandma Val said with a smile and reached up and patted him on

“I hear you have some cookies for me,” Ben said eagerly.

“You heard correctly,” Val said and they followed her into the kitchen.

She walked over to the counter and picked up a Tupperware container and handed it to him.  He immediately opened it and dramatically breathed in the aroma of the chocolate chip cookies and then took one out and put the whole thing in his mouth.

“Mmm Grandma, thes
e are amazing!” he mumbled with a full mouth. “Thank you.”

“You’re welcome, honey,” she said patting his back.

He finished chewing and then closed the container.

“Sorry we can’t stay longer, but we’ll see you at dinner tomorrow,” he said leaning in and dwarfing his grandmother in a hug. “Thanks again for the cookies.”

“Don’t forget to share some of those with Kathryn,” she warned.

“I’ll think about it,” he said glancing over to her and smiling mischievously. “But, we’re gonna get going.  See you tomorrow, okay?”

“Okay honey,” she said once more patting his back.

“See you tomorrow,” Kathryn said as they walked towards the front door.

Ben poked his head into the living room to say goodbye to his grandfather and then they walked back to the blue beast.  He helped her climb inside.

He placed the cookies on her lap once he was beside her in the driver’s seat.

“Oh my goodness, Benjamin Bradley!  Are you actually sharing your precious cookies with me?” she asked with mock enthusiasm.

“Wow…you must really love me,” she said opening the container and taking a bite.

“You have no idea,” he grinned
and then drove back to her apartment.

“Those cookies were amazing.  I can’t believe I ate four of them,” Kathryn said as she and Ben walked up the stairs to her apartment. “I feel like a stuffed pig.”

“Aren’t you sweet?” she said sarcastically. “But, I will definitely be going for a run tomorrow. You wanna join me?” she asked although she knew what he would say.

“C’mon.  It’ll be fun.  You and me, jogging down the road together, me leaving you in my dust,” she sang.

“You know I love you
, but I will never understand how you can run for fun.”

“You’ve never even given it a chance, so how can you be so quick to judge?”

“You’re wrong.  I have given it a chance and it sucks.”

“I don’t know why I even bother with you.”

“Because you couldn’t live without me,” he said with a cocky smile and when she turned to look at him, she knew he was probably right.

“Don’t flatter yourself,” she smirked as she put the key into the door and unlocked it.  The living room was dark, except for the fluorescent glow of the television.

“Hey Lacey,” Kathryn said as they walked in and weren’t surprised to see she was lying on the couch, a bag of popcorn on her chest.  Whenever Lacey had free time she was eating, but never seemed to gain any weight and Kathryn and Ben often referred to her as the bottomless pit.

Lost by Christina Draper
Over the Edge by Gloria Skurzynski
Robin Cook by Mindbend
Souls At Zero (A Dark Psychological Thriller) by Neal Martin
A Glittering Gallop by Sue Bentley
The Girl & the Machine by Beth Revis
Blood and Sand by Matthew James
Point Me to Tomorrow by Veronica Chambers
Hearts & Diamonds by Nichelle Gregory
Christmas Cover-Up by Eason, Lynette
Our partner