Read After The Virus Online 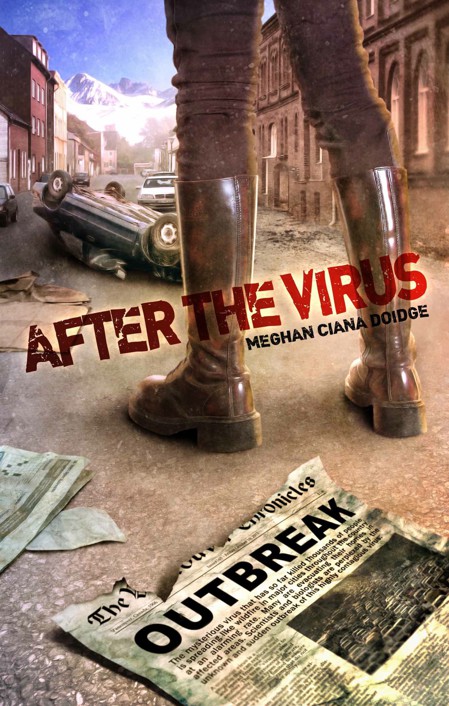 Published by Old Man in the CrossWalk Productions

Waking up was never a good idea, and this morning she had momentarily thought she was… before, before them, before this life. If this was what it was to survive the virus, she didn’t much like it, but the alternative, killing herself, seemed cheap and easy.

She could hear a woman weeping; something she hadn’t ever done.
Shut the fuck up, you’ll just entice them
; the walking horrors and their keepers.

They hadn’t raped her… yet. They had other plans.

If you weren’t for breeding, they fed you to the Infected; that’s how they kept them alive, inhumanly strong and terrifying — the blood of the immune.

It felt like months, but she was sure she had only been here a few days. She was also very sure her friends-of-necessity were dead.

It was difficult to gauge in the dark. They, all women, were crammed into some concrete box, not chained but definitely trapped. There was a toilet; the door had been removed and it didn’t flush, but at least they weren’t continually sitting in piss and shit.

She was definitely in some city they were working to get back online, but food still came in cans.

There’d been a power surge yesterday, and when her eyes adjusted, she’d seen the door through which she would find freedom or death.

Chair like cages, stirrups, and women with electrodes to their heads and bellies — baby mills?
They made sure she had seen it all, like they were giving her some sort of insanity tour when they dragged her in.

She was either going to go crazy, die of boredom, or kill the woman who kept trying to fiddle her whenever she succumbed to sleep.

She could also hear the chains they kept around the Infecteds’ necks.
Why bring them at all?
These few women were too broken to bolt.

They came every few hours to either take women or drop new cattle. Normally, along with all the others, she pressed against a gritty wall, eyes downcast, willing them not to see her.

Today, when she heard the bolts sliding, she stood and, stumbling over scrambling bodies, moved to the very center of the sty. Trapped here, she was losing all sense of being. It was time to make her stand. It was time to try to get through that door. She’d rather be dead than immobile.

She’d been told, before this, that she was beautiful, that her eyes were striking, so she ran her fingers through her hair and tilted her head. Harsh light struck her eyes, but she struggled to keep them wide, perhaps even coy, if she could remember how to be so. Silence fell, and even more so than before, she felt their stares.

Two men loomed in the doorway with — heard more than seen — one of them. The Infected, all chain-rattling and snuffling great gobs of green snot. There had to be an ever-present danger of the hunter mutinying against the master — they didn’t even keep the chains taut — but right now, she didn’t give a fuck about anyone’s life but her own.

“Hello, sweet thang,” he, with the shotgun, purred. ”Remember me?”

Over his shoulder, the Infected groaned in an odd, soft sort of pleasure, at the smell of so many of the Immune so near.

She wouldn’t reply, not to him, not as if he had a soul, but she did suck on her lower lip to strike a thinking pose and keep them distracted.

Yeah, asshole, I remember. Your dick is so insignificant you use a shotgun instead.
She wouldn’t scream, so you pulled the trigger three times.

“We were just coming to get ya. Lucky girl. The Boss wants a taste, so no chains and chair for you. You get to ride the biblical way.”

Great, he thinks he’s funny — maybe even charming — but the fucking prick screamed his own name as he jizzed all over that fucking shotgun
.

They reached for her, but she stepped forward so their fingers just brushed her bare arms.

The Infected growled at her nearness.

She dropped her eyes. She hadn’t been this close to one since… since it was someone she had known before. It reeked, worse for having been dying for months.

“Look out, sweet,” Asshole cautioned. “Any bites out of you the Boss wants, he’ll take.” The two of them yanked harshly on the Infected’s neck chain.

What the fuck was his name?
She couldn’t remember and she wanted to shriek it in triumph when she bludgeoned him with his own shotgun.

Their caution hinted that they wouldn’t hurt her, not too badly, unless forced. A woman was rare. A woman of childbearing age was precious. So her full lips and wide hips would keep her relatively safe, until… Well, there wasn’t going to be an until, not like this, not here, not if she could do anything about it.

They guided her down a concrete hall. She could hear generators whirling nearby, but didn’t see what they powered. Shadowed stairs led up. She could smell dampness; not the ever-present seeping rusty water mixed with piss and puke, but actual fresh rain.

The stairs led out. Outside.

She swallowed her hope so they didn’t feel her energy blooming.
How much of the city did they control? All of it?
If so, she was fucked.

More men at the top of the stairs equaled more staring. She hoped their Boss scared them dickless, otherwise she’d miscalculated. She could already feel pricks coming to attention, ready and willing to plunder her abyss. Except the Infected, of course; it just wanted to eat her.

She paused to consider that she might be crazy. She’d been in her head for days now.
What if this was all some sort of massive psychosis brought on from some brain tumor?
But then she quickly discarded this theory as unhelpful and irrelevant. It’s not like this was some movie, and even if it was all in her head, she still had to be herself, and react like she would. She still had to be in control.

They reached for her because she’d stopped, so she jerked away. They laughed.
Men. Laughing.
The virus had really shit-kicked women’s lib. She hadn’t grown up with four brothers not knowing how to handle a man. They were dogs and she was nobody’s bitch. Her bite was worse.

Cool air lifted her hair; she breathed like she hadn’t had oxygen for days, and looked to see that they were in a glassed space, like an atrium. It was night. More underlings held the door open expectantly, so she headed that way. Outside, the street was wet enough to reflect the moon.

Shotgun Asshole got tangled in its chain.

Yelling and beating commenced. The Infected roared in response even as it tried to cower between the neglected dried husks of the indoor palm trees.

The street was empty.

She felt the sure grip of her Merrell soles as she sprung ahead, and was fucking glad she’d salvaged them from an outlet mall only days before they captured her.

These men had grown accustomed to, and lazy with, their dominance. She was a hundred feet away before they gave chase. She hit side streets and turned often.

The Infected could track her, of course. It loved a hunt.

She darted into an alley where they had obviously been clearing cars, though they hadn’t bothered dealing with the rotting corpses. She forced her brain to see these just as obstacles, to be climbed and dodged. If her hand sunk into some soggy chest cavity or her ankle twisted in mushed brains, she just ignored it. Her heart beat firmly in survival mode.

As she hit a relatively cleared section, some other person or people cut across her path — perhaps deliberately — twice.

The effort to breathe quietly used too much air. She couldn’t soften the slap of her shoes on the wet concrete. She wasn’t going to make it.

She pressed behind a dumpster to listen to the chase. The men, and the bellowing Infected, were a couple of streets off as best as she could gauge in the dark confusion. She pondered that she hadn’t seen any dead bodies for a couple of streets now, but then chided herself to focus.

“Left, left, and right,” a voice cut through her labored breathing. She tried listening to source him in the dark, but stopping breathing wasn’t currently an option.
Was that heavily shadowed brick doorway concealing someone?
The darkness was too deep to be sure. “Go,” he insisted. Someone else darted from the doorway and headed right.

“I see her, heading towards the park,” a woman, from a window above and behind her, yelled.

Needing to trust the first voice, she veered left again and then right. A tall chain-ink fence, pushed by unseen hands, suddenly closed the alley behind her.

There were people here.
People helping her escape. Her brain clicked from image to image. The crisscrossing of her path had been to confuse the hunter, to whom any immune blood beckoned. Then the guiding voice and now the gate, but she couldn’t seek haven, couldn’t risk that this new group wasn’t just like all the others had been. The disintegration of humanity seemed utterly complete.

She continued to run through alleys and back lanes until she realized she was completely alone and compelled to stop. She tucked into some shadows. Her stomach revolted; nothing came up.

She might have passed out there. If so, that wasn’t good because she wasn’t sure how much lead time she’d lost. But then she heard barking.

Savage barking. A dog. Here?
She’d only seen maggot-ridden corpses in yards and ditches since… since everyone who was going to die had. She instinctively followed the barks.

The barks led in a direction she knew she shouldn’t go, but the dog’s pain and desperation drew her, and then… then she heard the laughter.

Before she even located them, she picked up a heavy piece of metal, some rusted length of plumbing that had deadly weight. Turning the corner, she found them clustered in a basketball court nestled between derelict high rises.

They were baiting the dog, a powerful Rottweiler, against one of the Infected.
Fuck, how many were they keeping alive?
One less, if she had her way.

The dog is fatally hurt
, her brain argued.
You aren’t going to save it, even if you sacrifice yourself.
But her feet kept moving.

She smashed the pipe down to split the nearest head, and then on the reverse stroke, probably sent nose bone shards into a second brain.

In the following confusion, she flipped the pipe lengthwise and drove it into the Infected’s back. Their skin was saggy, soft, a bit like butter.

She easily skewered its heart.

In its dying rage, it grabbed the nearest man and tore off an arm.

Clawing hands were all over her now.

By the screams, it sounded like the Infected was eating one of them, but two others had her down.

Murder Among the Angels by Stefanie Matteson
Marissa Day by The Surrender of Lady Jane
Sundancer (Cheyenne Series) by Henke, Shirl
Deep Fathom by James Rollins
Racketty-Packetty House and Other Stories by Burnett, Frances Hodgson;
Take Your Shirt Off and Cry: A Memoir of Near-Fame Experiences by Nancy Balbirer
Acts of Love by Judith Michael
Any Witch Way by Annastaysia Savage
Wild Blood (Book 7) by Anne Logston
Bond, Stephanie - Body Movers 05 by Jill
Our partner