After: Whiteout (AFTER post-apocalyptic series, Book 4) 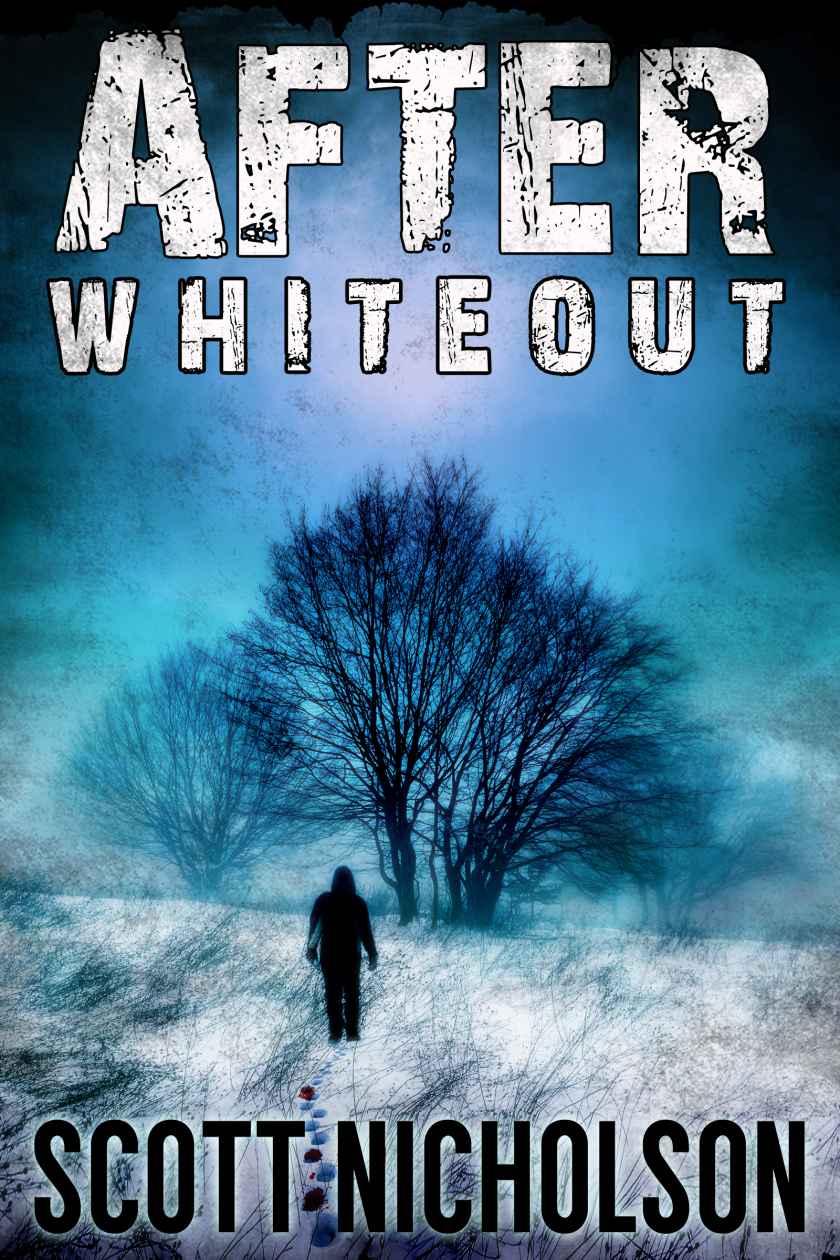 Rachel Wheeler and a group of survivors seek a refuge
in a post-apocalyptic world overrun with violent mutants and rogue militia.

Get Book #5 in the After series, AFTER: RED SCARE!

Other books in the After series:

After #0: First Light:
Amazon US

After #1: The Shock:
Amazon US

They
were eight miles south of the Blue Ridge Parkway when Rachel Wheeler first got
the urge to kill her companions.

They’d
dismounted their horses as the terrain had grown steeper, DeVontay leading one
of the pack animals just ahead of her. Dirt flew from the horse’s rear hooves,
a clump of it bouncing off Rachel’s shin. The motion of the creature’s legs
irritated her. She hated its power, its energy, its
aliveness
.

DeVontay’s
aliveness bothered her as well. Tall and dark-skinned, his shirt sleeves rolled
up past his muscular forearms, shoulders straight despite the weight of his
bulging backpack, he appeared vibrant and healthy. Except when he turned to
look at her, that one dead glass eye catching the dappled sunlight that broke
through the canopy of leaves overhead.

“You
okay, Rachel?” he asked, stopping for a moment.

But
she smiled, because that was expected. That was the human thing to do.

And
she was human. Wasn’t she?

“Not
much farther,” she said, casting about on the forest floor for a heavy stick or
broken branch she could use as a club. His skull looked inviting. She imagined
it split open, with red blood and gray brains boiling out of it. But now that
he and the horse were at rest, the inner dissonance faded. She could scarcely
remember what the irritation felt like.

Behind
her on the narrow trail was Stephen, slowing them all down with his little-boy
steps. Out of sight below them, Campbell led the other horse they’d appropriated
from the valley below. The North Carolina forest was brilliant with late
autumn, yellow and scarlet leaves skating down from the high branches to make a
colorful carpet on the dirt.

“Do
you think he’ll be expecting you?” DeVontay said. “It’s been almost three
months. He’s probably given up hope.”

“No,”
Rachel said. “Even if my grandfather thinks I’m probably dead, he’ll still be
waiting.”

Franklin
Wheeler wasn’t the optimistic type, but he’d promised Rachel he’d stay at his
compound at Milepost 291 “until the buzzards haul off my creaky old bones.” She
hadn’t had any contact with him since the solar storms back in August ripped
the world apart, shut down civilization, and wiped out billions with
electromagnetic radiation. And a new kind—the mutant Zapheads whose physiology
had been irrevocably altered—had ascended to the top of the food chain as a
result.

“We’ll
be exposed out on the parkway,” DeVontay said. “Maybe we should ditch the
horses. The terrain’s getting too steep for them. This is mule country.”

“What
kind of message would that send Stephen? That we just toss things aside when
they no longer suit us? He’d probably worry that we’d be getting rid of
him
next.”

“Yeah,
better keep you,” DeVontay said, patting the animal’s neck. “We don’t want to
haul all that junk ourselves.”

DeVontay
tugged the reins and the horse lifted its big hooves. As they continued up the
trail, Rachel’s rage returned. The motion of both the man and the animal caused
her an almost physical pain.

Stephen
shouted something. He wasn’t alarmed but was clearly excited.

“Keep
it down,” DeVontay ordered in a stage whisper.

Rachel
finished his sentence in her head:
Or the Zapheads might get us.

“I’ll
check,” Rachel said, relieved to get away from DeVontay before she attacked
him.

She
backtracked thirty yards, passing an outcropping of granite slabs that looked
like it had been shot into the earth from an alien spacecraft. Stephen was just
beyond it, kneeling in the leaves, clawing at the ground. Campbell’s horse
clopped in the forest, scuffling leaves. He must have taken a detour through
the woods even though DeVontay told them to stay together.

“What
is it?” Rachel asked Stephen.

“Stephen,
you shouldn’t be handling that. Put it down. Gently.”

She
looked around
. What was a gun doing out here in the middle of nowhere?

None
of them were armed. DeVontay and Stephen had narrowly escaped a Zaphead attack
after a rogue band of survivors killed the people they were with. She and Campbell
had fled from a farm where Zapheads kept them as involuntary guests, but her
experience there had changed her. The Zapheads healed a vicious wound in her
leg, and she’d felt strange ever since.

Colors
and sounds seemed amplified, in much the same way she imagined psychedelic
drugs might alter normal perception. Small movements annoyed her. And she’d
seen the reflection of the small, animated flecks of gold in her own eyes. She
wasn’t sure how much of a Zaphead she was, but she’d made her choice.

She
was going to be human and resist the urges that boiled away inside her.

Yet
here was a gun.

Stephen
studied her, as if not fully accepting her as the woman who’d adopted him after
his mother’s death. He’d changed, too, no longer the innocent, scared child. He
held the rifle in his hands as if it were a toy, his eyes slit, face creased
with worry.

You’re
disobeying me. I said put it down. Now, you brat.

But
what she said was, “Stephen, you know what DeVontay would say.”

“We’ll
let DeVontay decide.” She walked toward him, one palm turned up. “Let me have
it.”

Stephen
held the rifle as DeVontay had taught him, barrel pointed down and to the side,
but he looked like he could swing it up in a heartbeat. It was a little heavy
for him, and a long magazine protruded from the stock just in front of the
trigger. Probably an automatic or semi-automatic, a weapon designed to pump a
hail of bullets as fast as possible.

“There’s
blood on it,” Stephen said.

Rachel
could make out the gummy, brown splotches on the stock. The blood wasn’t fresh,
but it hadn’t dried and flaked away in the weather, either. The weapon had
likely been dropped sometime since the last rain three days ago.

“Could
be some people around,” Rachel said. “Bad people. Like the ones that caught you
before.”

“Yes,
but let me hold it for you until we figure this out.”

Stephen
lifted the rifle a couple of inches. “Because I’m a kid, right? Because I’m
helpless.”

“No,
you’re the Little Man,” she said, using DeVontay’s pet phrase for the boy. “I
just don’t want you to get hurt.”

Or
to hurt me, either.

DeVontay
probably heard the murmur of their conversation but wasn’t coming back down
through the woods to see what was happening. He must have decided it wasn’t an
emergency and wasn’t worth trying to turn the big horse around on the narrow
trail. Campbell was somewhere off to the left, maybe fifty yards away, snapping
branches as he made a noisy passage through the trees.

“I
know how to shoot it,” Stephen said, curling one finger around the trigger.
“And we’re supposed to kill Zapheads now, right?”

“What
happened to your eyes?”

“Your
eyes. They have the lights in them like the Zapheads do.”

“That’s
just the sun reflecting in them.”

“How
come they don’t reflect like that in DeVontay’s or Campbell’s?”

“Guns
are scarier.” She didn’t like the way the boy was looking at her, his eyes
shaded by the bill of his Carolina Panthers cap. She strode toward him, forcing
herself to remain calm, stretching out her hand for the rifle, now only ten
feet away.

He
raised the barrel, which quivered, the muzzle like a black eye seeking light.

He’s
going to shoot me.

But
then she was close enough to grab the gun and tug it away. He let go and looked
down at the coagulated blood smeared on his hands. He wailed, “I’m sorry,” and
she knelt before him and gave him a hug.

Rachel
picked up the rifle and checked it over. She put her finger on the safety
mechanism. Even if Stephen had pulled the trigger, the gun wouldn’t have fired.
It was a military-grade weapon, and the magazine appeared to be half full of
brass jackets. It fired three-shot bursts, if she remembered correctly, or one
shot at a time. Plenty enough to finish the job.

A
big brown horse snorted and clopped out from the trees, Campbell astride its
back. The animal also carried several canvas bags of supplies and a bed roll
the group collected from a house where they’d rested for a week. “What’s going
on?”

She
could do it. Flip the safety, spray a burst in their direction, and then get
DeVontay. Destroy them all.

“I found
a gun,” Stephen said to Campbell, who swung off the back of his horse, nearly
losing his balance.

“Nice,”
he said. “We need some protection. Let me have it, Rachel.”

Campbell
’s tousled hair gave him a sleepy aspect, but his lip
curled in a sneer that was wide awake. He pushed his glasses up his nose. “Who
voted him king?”

“He’s
taken care of us for two months. And he’s gotten us this far.”

“Sure,
but who got you away from that farmhouse full of Zaps? Where was he then?”

“We
need to all stick together now.”

“So
your wacko grandpa can squirrel us away in some survival compound and turn us
into beef jerky?”

Two
quick movements of your fingers. Flip this safety and pull the trigger, and you
can shut him up. Forever.

“Stop
it,” Stephen shouted, clamping his hands over his ears. He was ten years old
again, despite the growing up that had been forced upon him in that cataclysmic
flash of light.

Campbell
shot her a look that seemed to blame her for the
outburst. But he made no move to comfort the boy.

“What’s
going on down there?” DeVontay called.

“We
found a gun,” Rachel said.

Rachel
imagined him tethering the horse to a tree so he could walk down the trail. She
was glad he’d take the decision out of her hands, because she didn’t trust
herself right now.

“Don’t
you wonder what that gun’s doing out in the middle of nowhere?” Campbell asked.

Something Unexpected by Wendy Warren
Decoded by Mai Jia
It Was Me All Along: A Memoir by Andie Mitchell
Banishment (Daughters of Mannerling 1) by M. C. Beaton
Shamus In The Green Room by Susan Kandel
Hart by Townsend, Jayme L
Right to the Edge: Sydney to Tokyo By Any Means by Boorman, Charley
21 Dares: A Florida Suspense Mystery by JC Gatlin
Illusionarium by Heather Dixon
An Aria Writ In Blood (The Underwood Mysteries Book 4) by Suzanne Downes
Our partner