Read Against the Day Online 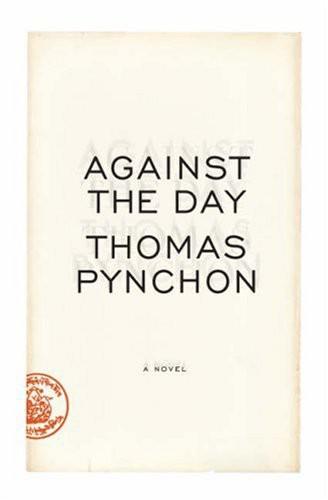 The Crying of Lot 49

First published in 2006 by Viking Penguin, a member of Penguin Group
(USA) Inc.

This is a work of fiction. Names, characters, places, and incidents
either are the product of the.

author’s imagination or are used fictitiously, and any resemblance to
actual persons, living or

Against the day / Thomas Pynchon.

Without limiting the rights
under copyright reserved above, no part of this publication may be reproduced,
stored in or introduced into a retrieval system, or transmitted, in any form or
byany means (electronic, mechanical, photocopying, recording or otherwise),
without the prior written permission of both the copyright owner and the above
publisher of this book.

The scanning, uploading, and
distribution of this book via the Internet or via any other means without the
permission of the publisher is illegal and punishable by law. Please purchase
only authorized electronic editions and do not participate in or encourage electronic
piracy of copyrightable materials. Your support of the author’s rights is
appreciated.

The
Light Over the Ranges

Now single up all lines!”

It was amid such lively exclamation
that the hydrogen skyship
Inconvenience,
its gondola draped with
patriotic bunting, carrying a fivelad crew belonging to that celebrated
aeronautics club known as the Chums of Chance, ascended briskly into the
morning, and soon caught the southerly wind.

When the ship reached cruising
altitude, those features left behind on the ground having now dwindled to all
but microscopic size, Randolph St. Cosmo, the ship commander, announced, “Now
secure the Special Sky Detail,” and the boys, each dressed neatly in the summer
uniform of redandwhitestriped blazer and trousers of sky blue, spiritedly
complied.

They were bound this day for the city
of Chicago, and the World’s Columbian Exposition recently opened there. Since
their orders had come through, the “scuttlebutt” among the excited and curious
crew had been of little besides the fabled “White City,” its great Ferris
wheel, alabaster templesof commerce and industry, sparkling lagoons, and the
thousand more such wonders, of both a scientific and an artistic nature, which
awaited them there.

“Oh, boy!” cried Darby Suckling, as
he leaned over the lifelines to watch the national heartland deeply swung in a
whirling blur of green far below, his towcolored locks streaming in the wind
past the gondola like a banner to leeward. (Darby, as my faithful readers will
remember, was the “baby” of the crew, and served as both factotum and mascotte,
singing as well the difficult treble parts whenever these adolescent aeronauts
found it impossible to contain song of some kind.) “I can’t hardly wait!” he
exclaimed.

“For which you have just earned five
more demerits!” advised a stern voice close to his ear, as he was abruptly
seized from behind and lifted clear of the lifelines. “Or shall we say ten? How
many times,” continued Lindsay Noseworth, secondincommand here and known for
his impatience with all manifestations of the slack, “have you been warned,
Suckling, against informality of speech?” With the deftness of long habit, he
flipped Darby upside down, and held the flyweight lad dangling by the ankles
out into empty space— “terra firma” by now being easily half a mile
below—proceeding to lecture him on the many evils of looseness in one’s
expression, not least among them being the ease with which it may lead to profanity,
and worse. As all the while, however, Darby was screaming in terror, it is
doubtful how many of the useful sentiments actually found their mark.

“Say, that is enough, Lindsay,”
advised Randolph St. Cosmo. “The lad has work to do, and if you frighten him
that way, he sure won’t be of much use.”

“All right, shortstuff, turn to,”
muttered Lindsay, reluctantly setting the terrified Darby back on his feet. As
MasteratArms, in charge of discipline aboard the ship, he went about his job
with a humorless severity which might, to the impartial observer, easily have
suggested a form of monomania. But considering the ease with which this
highspirited crew were apt to find pretexts for skylarking—resulting more
than once in the sort of “close call” which causes aeronauts to freeze with
horror—Randolph usually allowed his secondincommand to err on the side of
vehemence.

From the far end of the gondola now
came a prolonged crash, followed by an intemperate muttering that caused
Randolph, as always, to frown and reach for his stomach. “I have only tripped
over one of these picnic baskets,” called out Handyman Apprentice Miles
Blundell, “the one all the crockery was in, ’s what it looks like
. . . .
I guess I did not see it,
Professor.”

“Perhaps its familiarity,” Randolph
suggested plaintively, “rendered it temporarily invisible to you.” His reproof,
though approaching the caustic, was well founded, for Miles, while possessed of
good intentions and the kindest heart in the little band, suffered at times
from a confusion in his motor processes, often producing lively results, yet as
frequently compromising the crew’s physical safety. As Milew went about picking
up pieces of the damaged porcelain, he evoked the mirth of one s noChick
Counterfly, the newest member of the crew, who was leaning against a stay,
observing him.

“Ha, ha,” cried young Counterfly,
“say, but if you ain’t the most slobfooted chap I ever seen! Ha, ha, ha!” An
angry retort sprang to Miles’s lips, but he suppressed it, reminding himself
that, as insult and provocation came naturally to the class from which the
newcomer sprang, it was upon his unhealthy past that one must blame the lad’s
habits of speech.

“Why don’t you give me some of that
fancy silverware, Blundell?” young Counterfly now continued. “And when we get
to Chicago we’ll find us a ‘hock shop’ aand—”

“I recall to your attention,” replied
Miles politely, “that all tableware bearing the Chums of Chance Insignia is
Organizational property, to be kept aboard ship for use during official meal periods.”

“Like Sunday school around here,”
muttered the picklesome youth.