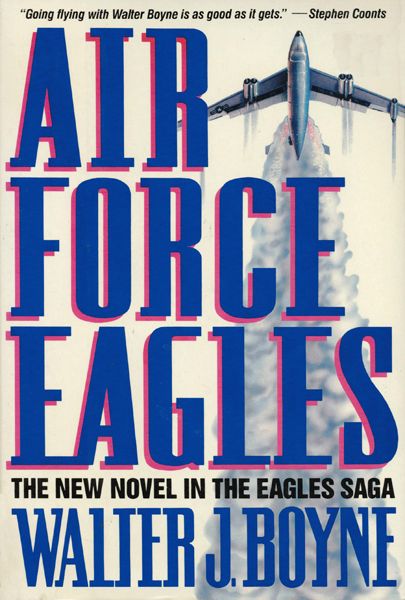 Publisher's Note: This is a work of fiction. The characters, incidents, and dialogues are products of the author's imagination and are not to be construed as real. Where the names of actual persons, living or dead, are used, the situations, incidents, and dialogues concerning those persons are entirely fictional and are not intended to depict any actual events or change the entirely fictional nature of the work.

All rights reserved. No part of this book may be reproduced or transmitted in any form or by any means, electronic or mechanical, including photocopying, recording, or by any information storage and retrieval system, without permission in writing from the publisher. To request permission, please write to: Permissions, IPS Books, 1149 Grand Teton Drive, Pacifica, CA 94044.

The Jet Age ( With Donald Lopez)

Messerschmitt Me 262: Arrow to the Future

Boeing B 52: A Documentary History

The Aircraft Treasures of Silver Hill

The Smithsonian Illustrated History of Flight

The Smithsonian Book of Flight for Children

The Power Behind The Wheel

Art in Flight: The Sculpture of John Safer

Beyond the Horizons: The Lockheed Story

The Best of Wings

The Influence of Air Power on History

The Alpha Bravo Delta Guide to the U.S. Air Force

The Alpha Bravo Delta Guide to the U.S. Navy

The Alpha Bravo Delta Guide to the U.S. Army

The Alpha Bravo Delta Guide to the U.S. Marines

Dawn Over Kitty Hawk: The Novel of The Wright Brothers

Heat crusted the land, wilting the scrub pines clinging with twisted roots to the flint outcroppings and making the memory of Alabama's red clay and green trees seem like paradise. He sprawled rag-doll lazy across the wing, greedily soaking up the warmth, knowing that in just a few minutes he'd be freezing.

John Marshall was thinking of his shy wife, wanting to possess her at that moment, to engulf her ripe-peach sweetness in his mouth. Suddenly laughing, he vaulted from the wing and began shadow boxing furiously, sparring off his sexual tension.

"Whooee, you a real Henry Armstrong today, Lieutenant. What-chou laughing about, sir?" As he talked, the crew chief kept on polishing the gleaming aluminum to gain a little more speed for his pilot.

"Nothing I can talk about, Sarge." Marshall smiled again at the impossible thought of his shy wife making love in the daylight, in the open, on the warm wing of his Mustang.

He shook his arms to loosen up, then sat down and took a lined yellow tablet from his kit. With short, bold pencil strokes he sketched the Group Headquarters on the pad held in his lap. It was a classic peasant farm building of arches and angles, the rumpled red-tile roof slanting over the tarnished yellow stucco exterior. In front, an olive-drab Army ambulance stood next to an abandoned oxcart worn colorless by time. At the corner of the building he drew a little flop-eared dog with a big spot on its side. It was Banjo, Saundra's beloved beagle, and it figured in every sketch he sent her.

"This wouldn't be a bad place, Sarge, if we could bring our wives along."

"Not too many of us has wives, sir. You the lucky one."

"That I am, that I am." Yet tough as it was to be away from her, it was fine to be there in the sun, waiting for the takeoff signal.

A short, round pilot plopped down beside him; there was a ruby tone to his deep black skin, shiny with sweat and smoothed by the weight he so carefully fostered.

"Pretty good drawing, man." Lieutenant Walker was the biggest eater and the best pilot in the outfit—and one of Marshall's few friends. It always made him feel good just to see Walker's lazy, ever-present grin.

"Thanks, Jellybutt." Most everybody else had nicknames, some funny, some cruel, all accurate. Marshall envied them; he hadn't earned his own yet.

Biting savagely into a Hershey bar gone soft in the sun, scooping the runny brown into his mouth, he leaned back against the Mustang's tire. "When you were back in Tuskegee did you ever think you'd make it all the way to combat?"

Marshall stood up to stretch, pressing his hands against his sweat-soaked back.

"No. I figured we'd all be washed out to some infantry outfit, or wind up digging ditches."

"Me, too, especially with all the trouble you got me into."

Marshall had twice run afoul of the South's rigid segregation—once going into a drugstore to ask for a Coke, once drinking out of the wrong fountain. Walker had been there both times to smooth things over with his deferential good humor, a forelock-tugging, toe-shuffling routine that soothed white feelings. It was just an act, but a good one.

Jellybutt sat up, licking chocolate off his fingers. "Well, at least there's none of that segregation shit here."

Marshall glanced at his wristwatch and carefully packed away his tablet. "That's cause there's no white troops here. Wait till they put us on the base with a regular outfit—you'll see all the 'Whites' and 'Coloreds' signs you want, then."

Walker laughed. "Maybe. But by then you'll be a big ace and won't give a damn."

Marshall flushed, wishing he never said anything to Walker about his ambition to be the first Negro ace. He'd never let him forget it.

The siren suddenly wailed as red flares arched in the sky. Walker sprinted toward his plane as Marshall jumped up on the wing of his own.

Fifteen minutes later, the entire 332nd Fighter Group was climbing in great sweeping arcs to rendezvous with the majestic combat boxes of Fifteenth Air Force Flying Fortresses en route to bomb southern Germany. As they climbed, engines straining, their lazy turns converted speed into distance to keep them even with the bombers they were covering. It was a dream mission—they were not assigned to any specific group—free to hit any target they chose.

Marshall shifted in his seat, not yet chilled, the warmth of the sun through the canopy countering the forty-below-zero temperature outside. He wove a continual cross-check of the instruments with quick glances at the lethal beauty of the formations spread out across the blue Italian sky. To the left, a blur of midges blossomed into a flight of Mustangs that suddenly banked ninety degrees, flashing their silhouettes to the trigger-happy gunners in the stately bomber formations. Head-on, a Mustang looked like a German 109.

To the east, the Gulf of Venice glittered, the coastline slashed with the reflected light of lagoons and canals. They had just passed through twenty-nine thousand feet, flying in loose formation, about two hundred feet apart, zigzagging to stay with the bombers, when Marshall heard his flight leader call, "Hard right turn. Strip tanks."

Marshall booted rudder and aileron as he sent his external fuel tanks spinning end-over-end toward the checkerboard mix of barren hills and yellow-green vineyards below. As the flight leader went wings level, Marshall saw the Messerschmitts straight ahead, one thousand feet below them.

The Germans, bobbing along in their untidy finger-four formation, were getting ready to attack the bombers. Marshall's target, a dirty mottled gray, grew in his sights. At two hundred yards, he could see every detail plainly, the strange, goiter-like bulge just forward of the cockpit, stalks of radio antennae, black crosses outlined in white, a wide white stripe around the aft fuselage. Breathing hard, the cold oxygen drying his throat, Marshall reveled in the roar of his guns as his long burst exploded the Messerschmitt like a bursting balloon. As he pushed his Mustang into a steep dive to dodge the debris he thought, One down, four to go!

Wild with excitement, but still aware that it was dangerous to be alone, Marshall pulled his Mustang level, scanning the sky for his flight. Then, below and to the right, his peripheral vision caught another Messerschmitt, diving away. Instinctively, he jammed the throttle forward and dove after the quarry; he was merged with the airplane, the impulses from his brain transmitting directly into the Mustang's soul.

The 109 was moving fast, jetting full-power trails from the exhaust stacks. Gaining rapidly, Marshall began firing from three hundred yards out, watching his bullets tearing chunks from the frogskin-green camouflage mottling the enemy plane. As he closed he saw that it bore the new Italian insignia, vertical slashes of green, white, and red that proclaimed that some still followed Mussolini.

The smoking Messerschmitt slowed rapidly, skidding drunkenly to the right as its awkward landing gear slanted down. He passed just over it as the pilot plunged out of the burning aircraft to tumble over and over, white face and brown helmet alternating like a flipped coin.

Marshall banked hard left, trying to find his flight, glad the pilot had been able to bail out and hoping to see his enemy's parachute open. Alone in the Italian sky, he exulted, "Two in one day, not bad for a colored boy from Cleveland!"

The two victories replayed themselves in his head until he found himself roaring inches above the Ramitelli runway. Drunk with pride, he pulled up to do two perfect victory rolls, the sky and ground swapping places, knowing and not caring that his commander would be furious with his flagrant violation of the rules.

Marshall's landing was smooth. As he taxied in he could see his ground crew dancing like kids, waving a big captured German flag to share his triumphs.

Marshall stood on the brakes, jerking the Mustang to a nose-bobbing halt.

Oh, Mother of God, forgive me. The two Messerschmitts flashed in his mind again and the same sense of guilty dismay he'd felt when he'd accidentally run over his neighbor's pet dog swept over him. He had just killed a man—maybe two, if the Italian's chute hadn't opened.

He shoved his oxygen mask over his face and breathed deep. Then, shaking off the regret, he told himself, "Forget it! There's going to be more!"

Jellybutt was on the wing before the prop stopped ticking, yelling, "Two kills in one day! John, we're going to have to paint a skull and cross bones on your plane to warn the Germans off."

As Marshall pulled his helmet off, Walker smiled as he conferred the nickname. "That's it. From now on, John, you're Mr. Bones."

Mr. Bones, Marshall thought. Not bad. It sure beats "Jellybutt."

A Problem From Hell: America and the Age of Genocide by Samantha Power
Apocalypse to Go by Katharine Kerr
The Mirrors of Fate by Cindi Lee
It's Bliss by Roberts, Alene
Salvation Row by Mark Dawson
Donâ€™t Forget to Remember Me by Kahlen Aymes
Falling Stars by Loretta Chase
Commando by Lindsay McKenna
The Seduction of Elliot McBride (Mackenzies Series) by Ashley, Jennifer
Bacon Nation: 125 Irresistible Recipes by Peter Kaminsky, Marie Rama
Our partner