Alice Parker & the Curse of Fate 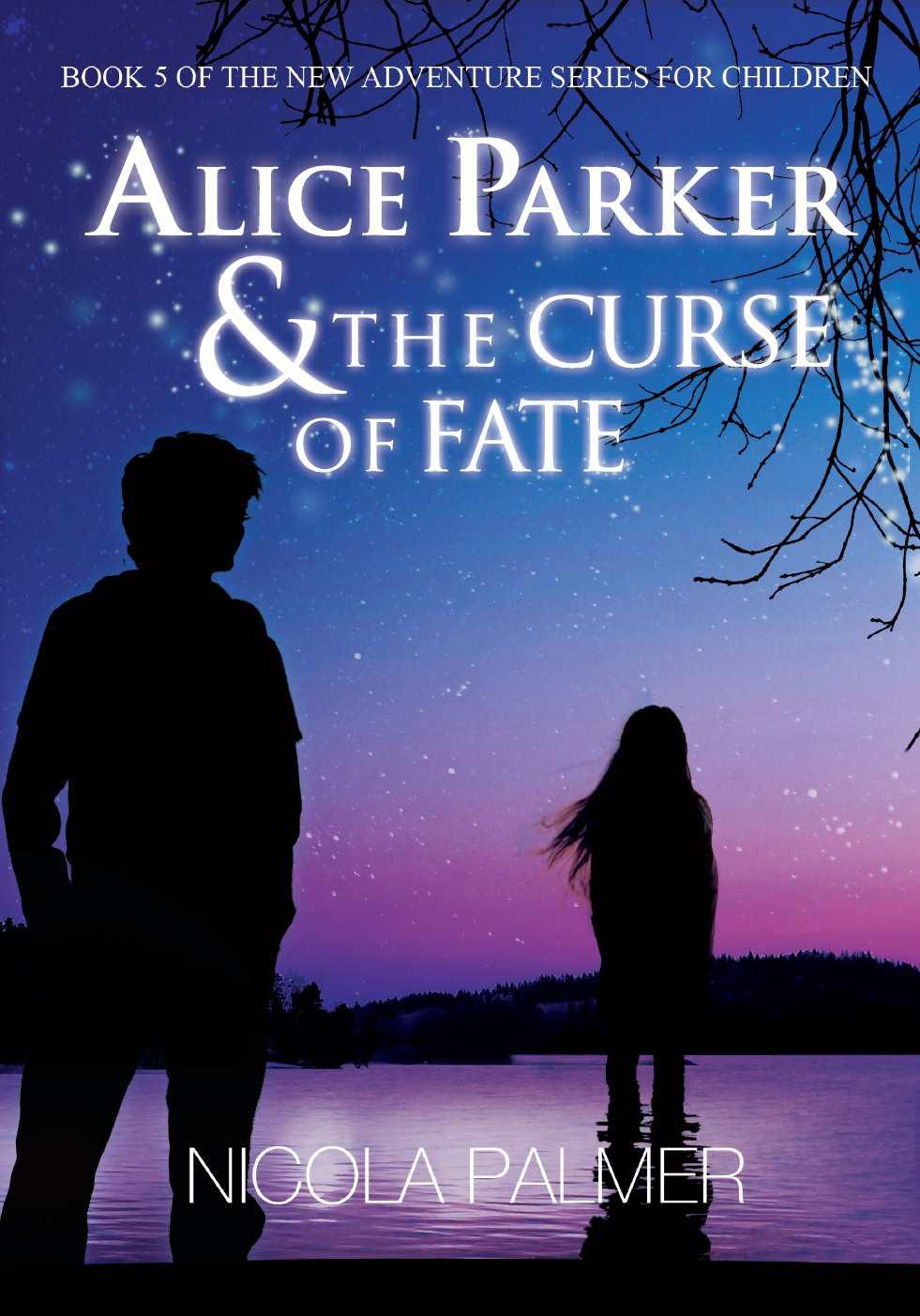 BOOK 5 OF THE NEW
ADVENTURE SERIES FOR CHILDREN

& The Curse
of Fate

Alice Parker &
The Curse of Fate

The right of Nicola
Palmer to be identified as the author of this work has been asserted
in accordance with the Copyrights, Designs and Patents Act 1988.

For Alice, James and
Lily

Too
Close for Comfort

Wrapped in cotton
wool.
That’s
how Alice and Thomas had spent the past few months – so to
speak. Finwips are not immortal, so when accidents had begun to
happen suspiciously frequently, they were kept under close
observation by their parents.

Finwips, or Fully
Integrated Winged People each have a special ability – or
several, in Alice’s case. But no special ability was required
to see that these incidents were not just bad luck. Someone was out
to get Alice and Thomas Parker. Someone who was not going to give up
easily.

First there was the
close encounter with an ash tree. One stormy night in October, the
Parker family had been asleep when they were awoken by a deafening
crash. Mum and Dad bolted out of their bedroom to see what had
happened, but Alice couldn’t move. Pinned to her bed by cold,
wet branches, she knew that a huge tree had come crashing through the
back of their house. Horror-struck, she wriggled each limb in turn,
wondering if anything was broken. Miraculously Jack, her Irish
Wolfhound, who had been sleeping beside her, was unhurt and trying to
fight his way through the branches.

‘
I’m
fine!’ Alice yelled from her leafy prison as her parents
screamed her name in panic. ‘What about Thomas?’

He was not quite so
fortunate. With mild concussion Thomas’s telekinesis ability
was useless, which meant Dad had to spend nearly an hour cutting
through branches with a saw to reach him in his bed. Thomas also had
two broken ribs but when his head felt better, he was able to fix
those himself. His healing ability was extremely useful, since
normal human hospitals were not an option for Finwips. Fortunately
Alice did not require any healing – just more hard graft from
her dad in order to escape.

On that occasion the
fallen tree was blamed on the high winds – until the tree
surgeons arrived to take it away. It seemed the old ash had not
simply toppled over. It was burnt and blackened at the base, as if
it had been struck by lightning. But there was no lightning the
night the tree came down. The Parkers only knew of one other source
of heat as intense as that, but tried not to panic initially.

Then there was the
accident in Thomas’s car. He had only bought it a few weeks
earlier and couldn’t wait to show it off to Alice when he came
home from university. Feigning interest in his second-hand rust box,
Alice agreed to let him take her for a spin. But down a narrow
country lane they nearly had a head-on collision with a black Range
Rover. Thomas had no choice but to swerve, causing his own car to
finish up on its side in the ditch. He and Alice were lucky enough
to escape with minor cuts and bruises, but the car suffered more
serious damage. The driver of the Range Rover did not stop, and they
didn’t see a face due to the tinted windows. However Alice had
noticed a familiar number plate; it began with IJR.

Isabella Jocelyn
Rowbottom had not been a problem for several months. She was a
Sinwip, a corrupt breed of Finwip, daughter of the infamously corrupt
entrepreneur, Brian Rowbottom. Earlier that year, after stealing
Alice’s unique books about her future, Isabella had discovered
something that filled her with rage. A rage so consuming, she had
been attempting to kill Alice until her cousin, Hugh Rowbottom, wiped
her short-term memory. But now Alice feared that somehow, Isabella
remembered everything clearly.

When a mysterious
fire started half way up the stairs at home, Alice knew exactly who
was responsible. The damaged stairs were level with the height of
the letterbox, so Isabella must have peered through it and used her
‘super-thermal’ ability. There was no doubt in Alice’s
mind this time. Isabella was up to her old tricks again. But why?

Whatever the reason,
Alice and Thomas’s parents were worried sick about them. They
did not even feel safe in their own home. Mum was having trouble
sleeping, through fear of what might happen next. Isabella would not
simply fry someone on the spot – that would attract too much
attention. Whatever she did was planned to look like an accident.
Gran suggested that as soon as Alice finished school for the
Christmas holidays, she should take her and Thomas to Germany to stay
with her sister.

‘
It’s a
good idea,’ Mum agreed. ‘We need to get you away from
here for your own safety. If this nonsense continues, you might not
see Christmas.’

‘
I’m not
looking forward to it anyway,’ said Thomas. ‘I feel
trapped here since you lot won’t allow me to drive.’

‘
It’s
for your own good,’ Grandma reminded him. ‘That Isabella
is clearly on a mission. Something must have got up her nose to make
her so persistent.’

‘
Just book the
flights to Berlin, Erika,’ pleaded Grandad. ‘Get them
away from here.’

‘
I’m
twenty-one. I’m too old for family holidays,’ moaned
Thomas. ‘Unless Ellie can come with us.’

‘
No, she
can’t. Brigitte’s apartment isn’t big enough for
all of us. Anyway, it’s not a holiday to entertain your
girlfriend. It’s a safety measure. And an opportunity for you
to visit your aunt, of course.’

‘
Well, I’m
fifteen and I don’t like flying. Does that count for
anything?’ asked Alice.

‘
No,’
said Thomas promptly. ‘It doesn’t make sense that you’re
happy to fly using your own enormous wings, but you’re scared
of travelling by plane!’

‘
I’m not
in control of the plane. That’s the difference. Anyway, can
you take time off from the lab or does Nona need your help at the
moment?’

Nona was the
resident scientist-engineer in Finwip village and Thomas worked as
her assistant during the holidays.

‘
Unfortunately
there isn’t much for me to do at the moment,’ said
Thomas, sounding disgruntled. ‘She says she’s dealing
with a project “of delicate subject matter” and prefers
to work on it alone.’

Alice sighed. ‘What
about you, Grandad? Are you coming with us?’

‘
I’d
rather stay here and keep my ear to the ground. I’m determined
to find a way to stop Isabella once and for all. Then we won’t
need to worry any more. Besides, I was only there in summer! And I
know Brigitte doesn’t really like me!’

‘
Oh, that’s
not true!’ protested Grandma. ‘She just finds you a
little strange. Perhaps all Finwips seem odd to people who don’t
know about them!’

That was another
issue. Aunt Brigitte was older than Grandma and not as open-minded.
Needless to say, Grandma had never told her about the existence of
Finwips. Grandad felt sure she sensed there was something different
about him, and often caught her staring at him across the room. He
found it so uncomfortable, he usually spent most of his time in
Berlin’s Finwip village and told Brigitte he’d been out
exploring the city. But these days Brigitte was growing suspicious
at how often he left her and Grandma alone.

‘
After fifty
years of visiting Berlin there can be nothing more to see!’ she
would argue.

Her English was
excellent, though that didn’t matter to Alice. Thanks to her
super-intelligence, she could speak any language fluently. Most of
the time she chose not to – it prevented arguments with Thomas,
who would accuse her of showing off.

Eventually Alice and
Thomas agreed to go to Germany. Alice decided she would like to
visit the Christmas markets, and could remember from several years
ago how much she liked the food. She and Thomas were not Finwips
then, so had not experienced Berlin’s Finwip village. This
time everything would be different.

In truth Alice
realised it made sense to get away for a while. She was tired of
living in fear; always looking over her shoulder instead of enjoying
what should be a fantastic life.

It was the last week
of term and Alice was not looking forward to telling Sarah she was
going away. They were very close friends and spent a lot of time
together in the holidays. Sarah Wiseman was Alice’s only
‘normal’ friend who knew about Finwips. Having witnessed
Alice’s metamorphosis and stood by her through every crisis
since, Sarah was very protective of her friend. This unexpected trip
before Christmas did not go down well when Alice broke the news at
lunch time.

‘
Your aunt in
Germany? I thought you weren’t keen on that old bat,’
replied Sarah. ‘You’re running away from something,
aren’t you? It’s to do with all these accidents, isn’t
it? What’s going on? Tell me!’

Before Alice could
answer, Lucinda Rowbottom, Isabella’s younger sister, joined
them at the table. She was a normal human who had been looking quite
ill lately; pale and gaunt with dark rings under her eyes. Of
course, it couldn’t have been easy for her, finding out that
her sister and father were Sinwips. But that had happened months
ago. Today Lucinda looked more stressed than ever. Anxiously she
looked all around then leaned over and whispered to Alice.

‘
I need to
talk to you in private. Follow me outside in a minute.’

Mystified, Alice
nodded. After Lucinda had left the dining room, Alice shrugged her
shoulders at Sarah and did as she was told. It was drizzling
outside, so no one was in the playground.

‘
Over here,’
hissed Lucinda, sheltering under a small tree. ‘Listen, I’ll
make this quick. I know all about Isabella and my father. What they
are, I mean.’