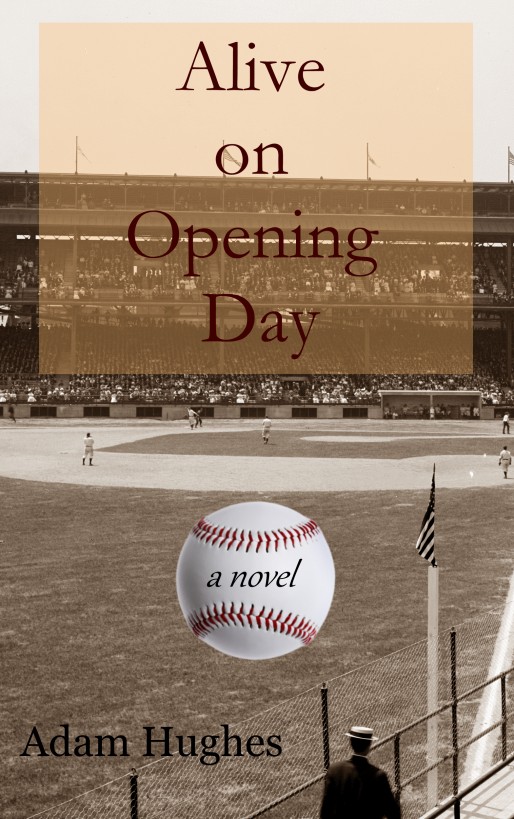 This ebook is licensed for
your personal enjoyment only. This ebook may not be re-sold or
given away to other people. If you would like to share this book
with another person, please purchase an additional copy for each
recipient. If you’re reading this book and did not purchase it, or
it was not purchased for your use only, then please return to your
favorite ebook retailer and purchase your own copy. Thank you for
respecting the hard work of this author.

This is a work of fiction.
Any resemblance to actual events, businesses, organizations, or
persons — living or dead, is purely coincidental.

This book is dedicated to
fathers and sons, but especially to
my
father and
my
son.

And to anyone who has ever loved
baseball.

Dan Hodges leaned over the
display case and pointed to a spot right in the middle, careful not
to touch the Plexiglass with his finger.

“
Can we see that Dave
Parker rookie card?” he asked the chunky middle-aged man behind the
counter.

The shop owner took
another bite of his hoagie and looked at Dan through slitted eyes.
“Sure, I guess so,” he mumbled, spewing pastrami fumes into Dan’s
nose.

The fat man stood and set
the sandwich on his chair, then rubbed his hands together to dust
off the crumbs and grease from his meal. He slid out the lucite
tray from the bottom of the case and picked up the 1974 Topps
Parker card by the edges of its rigid plastic holder.

“
Here you go,” he said,
holding out the card out for Dan to take. “You guys Reds
fans?”

He looked from Dan to Troy
and back to Dan again. Chubby squinted and raised his chin, almost
as if he were challenging Dan, who had seen this type of thing
before.

Dan cleared his throat and
pretended to be studying the card, then sneaked a look at the guy
behind the counter who was scrutinizing him even more closely than
before.

“
But I don’t know WHY you
wanted to see this card, Troy,” Dan said and turned toward his son.
“Especially when there is a perfectly good Dan Driessen card over
there in that box that you could have for a buck.”

Dan pointed to a white box
full of cards on a game table standing to Troy’s right.

“
Well,” Troy said, “for
one thing, Dave Parker is still playing. For another, he’s actually
a great player and is probably going to end up in the Hall of Fame.
If the Reds hadn’t let him walk a couple of years ago, they’d have
at least one World Series trophy by now.”

“
Just
like Oakland last year,” Troy finished his thought. “And it’s only
by a fluke of Kirk Gibson that they haven’t won
two
in a
row.”

The shop owner had picked
up his sandwich and sat back down, watching the two Hodges lob
verbal volleys between them like they were playing
tennis.

“
Oh,
Troy,” Dan said. “How many times do I have to tell you that there
probably wouldn’t have
been
a Big Red Machine if it weren’t for Dan Driessen?
He was the best of their young players in the middle 1970s and even
when Sparky Anderson pushed him off to a utility role because he
loved George Foster so much, Driessen was still a super sub. Heck,
was a younger, cheaper Pete Rose who could play almost anywhere on
the diamond. If the Reds had developed him the right way, he could
have been the next Mike Schmidt.”

Troy wasn’t sure if his
father was joking or not. He knew Dan had always held Driessen in
higher esteem than just about anyone else in the world did, but he
also knew that Schmidt had been Dan’s favorite player since at
least 1980. In either case, Troy didn’t really care what Dan
thought about Parker and Driessen as long as he left Doug’s Dugout
with the Parker card in his hot little mitts.

“
Maybe
you’re right about Driessen, Dad,” he said. “I suppose
he
was
pretty underrated.”

Doug, the shop owner,
stood up again and thrust his chin toward Dan. “Say, how does such
a young guy know so much about the old-time Reds?” he
asked.

Dan touched his chest with
his fingers, and raised his eyebrows. “Me?” he asked, and the fat
man nodded. “Well, like I said, I’ve been a Reds fan since I was
born, so I know pretty much everything about them.”

Doug looked sideways and
squinted again, sizing up both Dan and Troy, and Dan figured he’d
better wrap up their transaction before the slob said something
offensive.

“
Look,” Dan said to the
shop owner. “Parker was a great player and even helped the Reds out
when they were rebuilding a few years ago, but he’s at the end of
the line and there’s no way he’s going to hold on long enough to
make it to the Hall of Fame.”

Doug shrugged and put both
palms in front of him is if to say, “So?”.

“
So I’m thinking,” Dan
went on, “that $20 is a bit high for his rookie card, especially
seeing as how The Cobra is playing for another team. It’s got to be
hard to sell ex-Reds around here, right?”

The store owner didn’t
answer Dan’s question but asked one of his own. “What’s it worth to
you, then?”

Dan rubbed his smooth chin
and looked off to the side for a moment, then said, “How about
$10?”

Dan handed the card back
across the counter. “Alrighty then,” he said. “We have to get going
because the game starts in a couple of hours and we want to catch
batting practice.” Turning to Troy, he said, “We can use that $10
toward one of those Sabo jerseys you’re always harping
about.”

“
Wait a minute, wait a
minute,” Doug said as he scampered to his feet again. “You guys
seem like real solid Reds fans, so how about we meet halfway:
$15?”

Dan was guiding Troy out
the door and called over his shoulder, “Have a nice
day.”

Dan stopped and turned,
smiling at Doug. “Throw in the Driessen rookie and you’ve got a
deal.”

“
You’re killing me!” the
shop owner complained, but he stuck a greasy paw into the box
holding the Driessen card and pulled out Dan’s prize.

The next part made Dan
nervous, but he hadn’t brought enough cash to get them into
Riverfront Stadium and buy concessions
and
splurge for the two 1974 cards.
“Will you take a check?” he asked.

Doug grunted and pursed
his lips. “I don’t suppose you got any ID, do ya?”

“
Sure I do,” Dan said.
“How do you think we got here?” He took his wallet from his pants
pocket and fished out his driver’s license.

“
Uh huh,” Doug said. “I
figured you were from Indiana — nobody from the city would be still
be so hung up on Dan Driessen, of all players.”

Doug lay Dan’s license on
the counter in front of him, then leaned in close to read the
details, finally looked at Dan. He glanced back to the license and
again to Dan, held the license up to the light, and squinted his
eyes.

“
Say, what are you trying
to pull here, son?” he asked, glowering at Dan.

“
What do you mean?” Dan
asked in reply, though he knew what was coming.

Dan had his arm around
Troy’s shoulder, and he could feel his son growing more tense as
the conversation unfolded. They had been in these types of
situations before, and they always ran the risk of running into a
bad character, or worse, some sort of vigilante who might cause
real trouble. Dan thought Doug was just a blowhard, but he couldn’t
be sure.

He had already written the
check and slid it across the counter to Doug, who picked it up and
compared it with the driver’s license. Apparently satisfied that at
least the addresses and names matched, he huffed and pushed the two
cards in Dan’s direction.

“
Guess
I’m a darn fool who just wants to
give
his cards away,” he said. “You
boys go on and get out of here now, and I don’t want you coming
back in my shop again, you hear me?”

“
Loud and clear,” Dan
answered as he guided Troy through the front door.

On the sidewalk, Dan could
see Troy was shaken, but he didn’t want to let the card shop
incident ruin their outing. After all, he never really knew how
many days there would be before … well, before there
weren’t
any more. He
decided the best way to cut the tension was to talk about
baseball.

Most of life’s problems
could be lessened by talking about baseball, Dan had
found.

He held up the Driessen
card for Troy to see. “There it is,” he said. “The rookie card of
one Cincinnati’s great unsung heroes. Why, I knew from the first
time I laid eyes on Dan Driessen that he was going to be a
superstar.”

Troy still looked shocked,
but he managed to groan as Dan started talking about his old-time
Reds again.

It was the spring of 1973,
and Dan Hodges was fighting for his baseball life. He was a star
third baseman with a powerful bat, quick feet, and a rock-solid
glove, but at just five-feet-nine-inches tall and 160 pounds, he
was no one’s idea of an imposing figure. He knew no scout would
ever sign him to a contract right out of high school, so his dream
of making it to the Major Leagues hinged on his college
career.

But as the son of factory
department manager in central Indiana, there was no way Dan could
afford to go to college unless someone else paid the bills, and his
only hope of
that
happening was to land a baseball scholarship. So, no matter
how Dan looked at his life, success and happiness revolved around
the baseball diamond and on this one game in particular. All the
big schools had sent assistant coaches to watch him play during the
season, and the smaller schools had sent their head coaches, but
all of them ended up telling him a variation of the same thing:
they were set at third base for the next two or three years, and he
was too diminutive to hit well in college, anyway.

The one exception was
Ralph Harris, head coach of the Indiana Western University Red
Hawks in nearby Terre Haute. Harris had been one of the first to
come see Dan play at South Pickens High School, dropping in at the
beginning of the school’s second-ever season in March of 1971, when
Dan was a sophomore. At that time, Harris was an assistant and had
heard good things about the runt who led the Eagles in hitting in
1970, and the big, burly man struck up a friendship with Dan’s
father, David. As much as Harris had become a fixture in the Wabash
Valley and around the local high school circuit, though, and as
much as he liked the Hodges and thought Dan was a fine ballplayer,
Harris had just taken the helm at IWU in 1973 and needed to make a
splash to satisfy the school’s fans and donors.