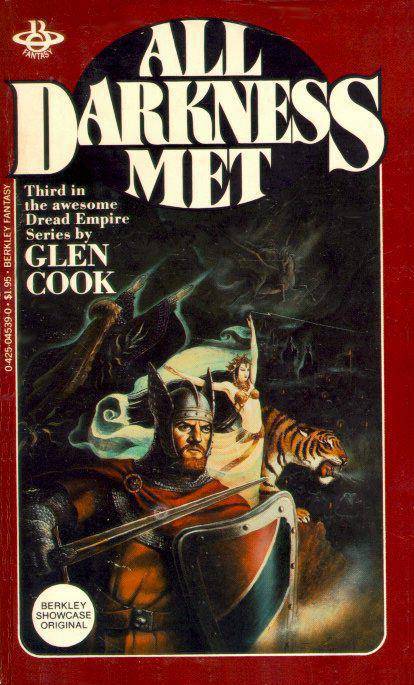 War is not all Hell. Mocker finds old friends in the halls of death, and Nepanthe new lovers in the fields of blood. The war-child wields the sword of truth: the Star Rider's dead secret is at last revealed. And so it ends. Though "end" is but a wizard-word for new beginnings...

FIVE:
A Traveler in Black

TWELVE:
The Stranger in Hammerfest

TWENTY-ONE:
The King Is Dead. Long Live the King

TWENTY-TWO:
Eye of the Storm

TWENTY-FIVE:
The Assault on Argon

TWENTY-SIX:
Battle for the Fadem

TWENTY-NINE:
A Dark Stranger in the Kingdom of Dread

THIRTY:
The Other Side

The woman screamed with every contraction. The demon outside howled and clawed at the walls. It roared like a wounded elephant, smashed against the door. The timbers groaned.

The physician, soaked with perspiration, shook like a trapped rabbit. His skin was the hue of death.

“Get on with it!” snarled the baby’s father.

“Do it!” Nu Li Hsi appeared undisturbed by the siege. He refused even to acknowledge the possibility of fear, in himself or those who served him. Would-be Lord of All Shinsan, he dared reveal nothing the Tervola could call weakness.

Still the physician delayed. He was hopelessly trapped. He couldn’t win. A demon was trying to shatter the sorceries shielding his surgery. Inside, his master was in a rage because the mother couldn’t deliver normally. The child was just too huge. The woman was a friend, and the surgeon doubted she could survive the operation. The only assistant permitted him was his daughter. No fourteen-year-old was ready to face this.

Worse, there were witnesses. Two Tervola leaned against one wall. These sorcerer-generals, who managed Shinsan’s armies and made up her nobility, were waiting to see the product of the Dragon Prince’s experiments.

The goal was a child who could develop into a super strong, super competent soldier, thinking, yet with little ability to become a personality in his own right, and immune to the magicks by which foes seized control of enemy soldiers.

“Start cutting,” Nu Li Hsi said softly, with the “or else” transmitted by intonation, “before my brother’s attacks become more imaginative.”

For a millennium Nu Li Hsi and his twin, Yo Hsi, had battled

for mastery of Shinsan, virtually from the moment they had murdered Tuan Hoa, their father, who had been Shinsan’s founder.

“Scalpel,” said the surgeon. He could scarcely be heard. He glanced around the cramped surgery. The Tervola, with their masks and robes, could have been statues. Nu Li Hsi himself moved nothing but his eyes. His face, though, was naked. The Princes Thaumaturge felt no need to hide behind masks. The surgeon could read the continuing anger there.

This was the Prince’s eleventh try using his own seed. Ten failures had preceded it. They had become reflections on his virility....

The surgeon opened the woman’s belly.

A half hour later he held up the child. This one, at least, was a son, and alive.

Nu Li Hsi stepped closer. “The arm. It didn’t develop. And the foot....” A quieter, more dangerous anger possessed him now, an anger brought on by repeated failure. What use was a superhuman soldier with a clubfoot and no shield arm?

Nu Li Hsi showed concern for the first time. “He is persistent, isn’t he?” He asked the Tervola, “Feed it?”

The Tervola, second only to the Princes Thaumaturge themselves, seldom became involved in the skirmishes of Shinsan’s co-rulers. If the thing broke the barriers contiguous with the room’s boundaries, though, it would respect neither allegiances, nor their lack. Yo Hsi would make restitution to the surviving Tervola, expressing regrets that their fellows had been caught in the cross fire.

The Dragon Prince produced a golden dagger. Jet enamel characters ran its length. The Tervola seized the woman’s hands and feet. Nu Li Hsi drove the blade into her breast, slashing, sawing, ripping. He plunged a hand into the wound, grabbed, pulled with the skill of long practice. In a moment he held up the still throbbing heart. Blood ran up his arm and spattered his clothing.

The screams of the doctor’s daughter replaced those of the sacrifice.

From outside, suddenly, absolute silence. The thing, for the moment, was mollified.

No one who hadn’t been in the room would know that it had been there. The spells shielding the walls weren’t barriers against things of this world, but of worlds beyond, Outside.

Nu Li Hsi sighed resignedly. “So.... I have to try again. I know I can do it. It works on paper.” He started to leave.

The doctor indicated woman and child. “What should I do?” The child lived. It was the first of the experimental infants to survive birth.

“He’s your son....” His words tapered into inaudibility before his master’s rage. Nu Li Hsi had serpent eyes. There was no mercy in them. “I’ll take care of it, Lord.”

As soon as the Dragon Prince vanished, the surgeon’s daughter whispered, “Father, you can’t.”

“You know the alternative.”

She knew. She was a child of the Dread Empire.

But she was barely fourteen, with the folly of youth everywhere. In fact, she was doubly foolish.

She had already made the worst mistake girls her age could make. She had become pregnant.

That night she made a second mistake. It would be more dire. It would echo through generations.

She fled with the newborn infant.

One by one, over an hour, six men drifted into the room hidden beneath The Yellow-Eyed Dragon restaurant. No one upstairs knew who they were, for they had arrived in ordinary dress, faces bare, and had donned black robes and jeweled beast masks only after being out of sight in a room at the head of the basement stair.

Even Lin Feng, The Dragon’s manager, didn’t know who was meeting. He did know that he had been paid well. In response he

made sure each guest had his full ten minutes alone, to dress, before the next was admitted to the intervening room.

Feng supposed them conspirators of some sort.

Had he known they were Tervola he would have fainted. Barring the Princes Thaumaturge themselves, the Tervola were the most powerful, most cruel men in all Shinsan, with Hell’s mightiest devils running at their heels....

Waking, following his faint, Feng probably would have taken his own life. These Tervola could be conspiring against no one but the Princes Thaumaturge themselves. Which made him a rat in the jaws of the cruelest fate of all.

But Feng suspected nothing. He performed his part without trepidation.

The first to arrive was a man who wore a golden mask resembling both cat and gargoyle, chased with fine black lines, with rubies for eyes and fangs. He went over the chamber carefully, making sure there would be no unauthorized witnesses. While the others arrived and waited in silence, he worked a thaumaturgy that would protect the meeting from the most skilled sorcerous eavesdroppers. When he finished, the room was invisible even to the all-seeing eyes of the Princes Thaumaturge themselves.

The sixth arrived. The man in the gargoyle mask said, “The others won’t be with us tonight.”

His fellows didn’t respond. They simply waited to learn why they had been summoned.

The Nine seldom met. The eyes and spies of the Princes and uninitiated Tervola were everywhere.

“We have to make a decision.” The speaker called himself Chin, though his listeners weren’t sure he was the Chin they knew outside. Only he knew their identities. They overlooked no precaution in their efforts to protect themselves.

Again the five did not respond. If they didn’t speak they couldn’t recognize one another by voice.

It was a dangerous game they played, for imperial stakes.

“I have located the woman. The child’s still with her. The question: Do we proceed as planned? I know the minds of those who can’t be with us. Two were for, one was against. Show hands if you still agree.”

“Seven for. We proceed, then.” Behind ruby eyepieces Chin’seyes sparkled like ice under an angry sun. They fixed on the sole dissenter present.

A link in the circle was weakening. Chin had misjudged the man behind the boar mask. The absentee negative vote he understood, accepted, and dismissed. Fear hadn’t motivated it. But the Boar.... The man was terrified. He might break.

The stakes were too high to take unnecessary chances.

Chin made a tiny sign. It would be recognized by only one man.

He had convened the Nine not for the vote but to test the Boar. He had learned enough. His decision was made.

They didn’t question, though meeting for so little seemed tempting Fate too much. They departed one by one, reversing the process of entry, till only Chin and the man who had been signaled remained.