Read All I Have Online 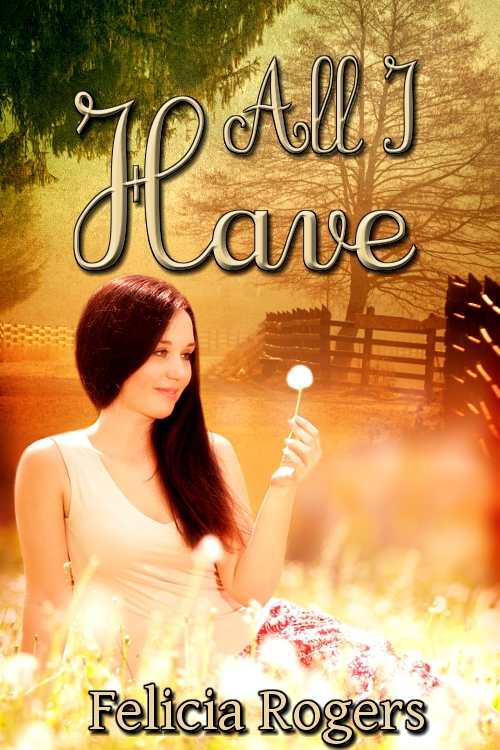 The helicopter hovered inches above the earth and clouded the surrounding area with dust. The landing skits touched down and the craft wobbled to a halt. A uniformed officer exited the chopper, his medals and ribbons shining brilliantly in the desert sun. An enemy officer waited and escorted him into a makeshift building.

Several prisoners crowded against the one barred window in the holding compound; another detainee tapped Nicholas' arm. "This is it, Lieutenant. They've come for us. You said they wouldn't forget."

Nicholas stepped away from the soldier and paced while thoughts of his family raced across his mind. Unbidden hope rose, maybe this was the day of freedom. A commotion amongst the men brought him back to the window. With weary eyes, they watched the officer return to the helicopter. Had they been left behind?

Ellie Pickett, twenty-two years old and a recent college graduate, was home for the summer. Hot, humid weather had forced her out of the house and onto a blanket spread on the grass. Today she'd decided to relax and read a book. The last couple of days had been particularly trying because her job search was going nowhere. Applications with her qualifications were scattered all over her small home town. So far there had been no responses.

For the third time, Ellie applied sunscreen to her lightly tanned skin. With a sigh of contentment, she stretched and watched clouds float across the sky. As a child, she had played a game of naming the shapes of clouds. Grinning, she whispered, "That looks like a sheaf of hay and that one favors a king. That one looks like a plump, white sheep." She studied the clouds until raised voices captured her attention.

"You did
what?"
said a woman's irritated voice.

Carla stomped the dry ground and kicked up dust. "Why didn't you ask me first? Don't we have enough people sucking off of us already? How many mouths do you think we can support?"

Ellie cringed at her stepmother's words. The comment about people "sucking" was obviously directed toward her. Listening intently, she heard her father's response. "I didn't ask because I didn't think you'd care. I mean, I'm helping an old friend."

"Yeah, Jake, exactly—an
old
friend. One you had before me. What if he doesn't like me? What if–"

Ellie sat up and watched the couple standing by the fence. Carla was playing with her father's collar, a flirty smile on her face. Jake pulled her against his body. "Now that's ridiculous. How could anyone not like you?"

Ellie squelched her disgust. Standing, she cleared her throat and slapped her thighs loudly.

Startled, Jake and Carla veered their heads in her direction. "Oh Ellie, I didn't see you," said her dad.

Ellie nodded and picked up her things, trying to avoid her stepmother's scowl. Walking toward them, she asked, "What's going on?"

Carla wrapped a possessive arm through Jake's. "Your father has invited a friend and his son to
live
at the farm for awhile."

Her father sighed. "You make it sound like they're coming as burdens or something."

Carla's gave him a disgusted look. "In my opinion, they
are
burdens. I don't know why they're coming and I don't care. I'm going to the house." She stalked away.

Ellie asked, "Want to explain to me why these people are coming?"

Jake leaned against the fence railing. Ellie mimicked her father's posture and waited. On the other side of the fence cows plucked lazily at the grass. Ellie thought about the simplicity of the life of an animal. Nature provided for them. They didn't fret over what would happen, day to day. They lived in the moment.

Ellie released a breath and waited for her father's reply. She wasn't in a hurry. She could stand and watch the beauty of nature all day. Her father's voice sounded thick as he sought understanding. "It's really not a big deal. Do you remember Shane Wiseman?" She nodded and studied his work roughened hands as he gestured with them. "He's fallen on hard times and, well, lately, running the farm alone has gotten more difficult. So I thought we could help each other. He and his son are going to stay in the old cabin and lend a hand for a small salary; nothing major."

Ellie shrugged. "Sounds okay to me."

Jake glanced at the house. "I wish Carla felt the same way. I think she's worried because Shane was friends with your mother and me."

Ellie patted his arm wanting to give a measure of comfort. "I'm sure everything will work out. And when they get here, I bet Carla will be just fine. By the way, when are they arriving?"

The truck's wheels rotated, eating up the miles. Flat land with stray trees and occasional buildings flashed past. Deep in Alabama a small replica of the Statue of Liberty caught the eye of passersby, causing an immediate sense of patriotism.

"Its beautiful country, isn't it, Nicholas?" said his father as he steered north bound along the interstate.

Nicholas nodded in agreement because he didn't feel able to speak. The dream was still fresh in his mind. Swallowing hard, he wondered if he'd cried out in his sleep. Had his father seen his distress?

He glanced sideways, and for the first time in months, noticed that Shane Wiseman actually appeared happy. His dad's fingers drummed the steering wheel in rhythm to a tune blaring from the radio and his lips twitched upward. A light shined behind the old man's pale blue eyes. While Nicholas watched, however, his father's smile faded and a line creased his forehead. Shane said, "Nick, you really don't have to do this, you know."

Before Nicholas could reply, his dad continued, "I know you think I need help, but really I don't. I can do this on my own." Nicholas started to interrupt, but Shane stopped him with an upraised hand. "Listen son, truth is, I relied on your mother for just about everything. She liked to feel needed. And now that she's gone, well, I can take care of myself." He sighed, "Heck, I'm glad you're coming with me. I just don't want you to feel obligated to help dear old dad."

Nicholas noted the half-smile, half-grimace on his father's face. Nodding his understanding, he shifted his focus back outside the passenger window. His anger remained too close to the surface. Sharing his true feelings wouldn't accomplish anything. What was done was done, and it could never be rectified.

Memories flooded of a generous, loving woman—a woman who had cared for her family, helped the elderly, visited the sick, and taken food to shut-ins; a woman who had organized bake sales and fundraisers to raise money for homeless shelters; a woman, wife, and mother, who had wanted to make the world a better place. Nicholas could only view her as a saint.

His chest tightened and he released a pent up breath. He missed his mother more with each passing day. It didn't matter that he was twenty-six years old, a military veteran, or a college graduate. He still missed her like a small child who's been away from his mother too long.

Two years ago, Amy Denise Wiseman, had been diagnosed with a rare form of cancer. With her normal intrepid nature, she'd fought with every fiber of her being. She'd followed her doctor's orders to the letter. When his treatments had failed, alternative medicines and remedies had been sought and explored. But in the end, nothing helped.

Nicholas had been on tour in Afghanistan and received frequent updates from his father. Most of the updates were of her degenerating condition. When he'd gone missing, all he could think about was how it would affect his mother's illness. He'd tried to ignore his inner turmoil, believing his mother was invincible; that she could overcome this latest challenge.

Months after being freed, he'd been ready to sign reenlistment papers, but received the dreaded call. The one he'd hoped would never come.

"Son, I'm afraid your mother's not going to make it."

Nicholas had declined to sign the papers and immediately sought emergency leave. When he'd arrived home, his mother's frail body could do nothing more than breathe. Helpless, he'd sat by her side and held the hand of someone who had helped so many. Amy Wiseman was nothing more than a shell. Then she died.

The funeral was packed. People from every walk of life wanted to attend and share their memories of this wonderful woman. Cancer patients from the hospital shared how she had encouraged them. Doctors shared her courage and fortitude. Everyone had a fond memory to pass along. Nicholas had listened and filed the testimonies away. Yet, to this day, bitterness and resentment over her death ruled his life.