Read All I Want - a Tryst With a Twist Online

All I Want - a Tryst With a Twist 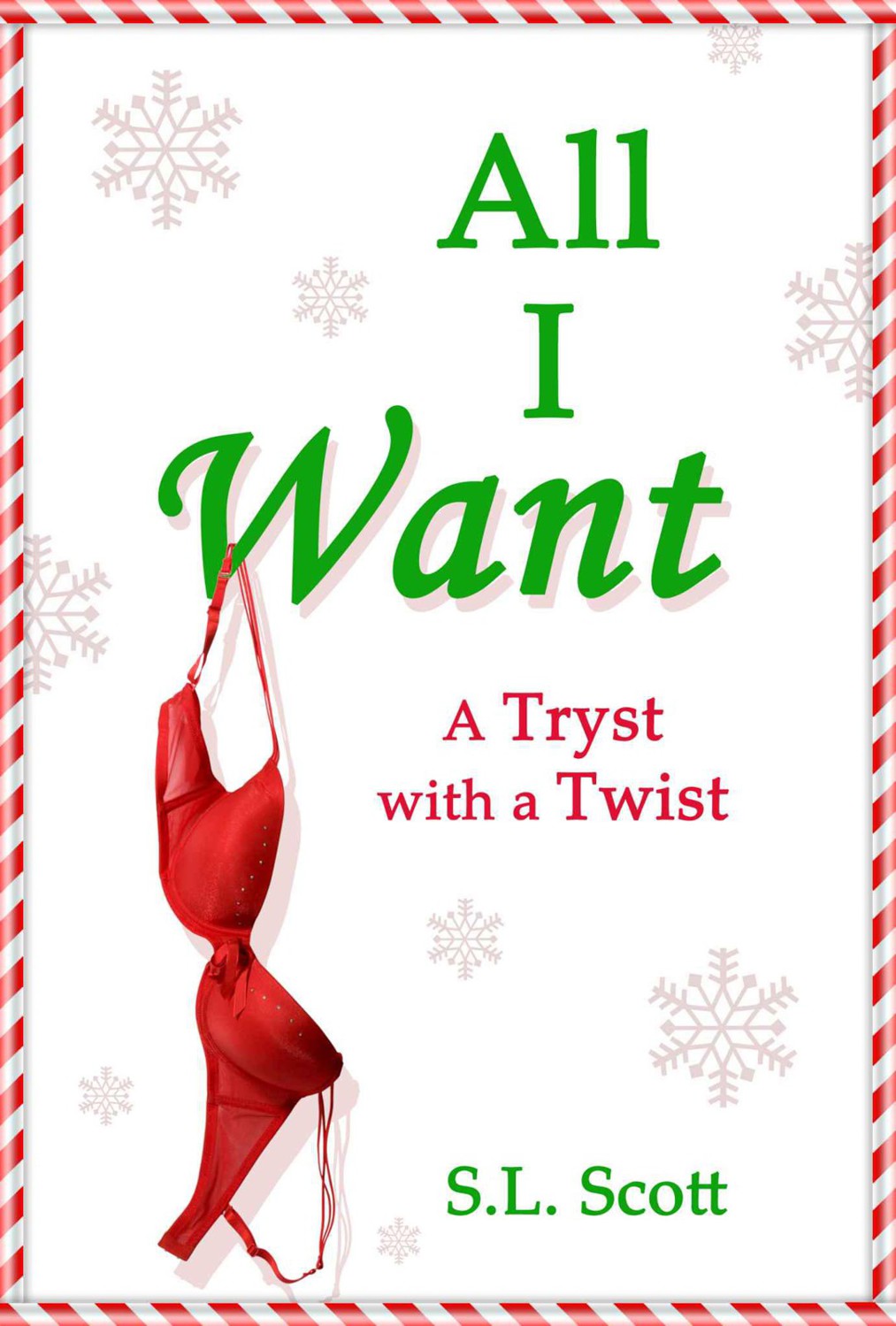 Except as permitted under the U.S. Copyright Act of 1976, no part of this publication may be reproduced, distributed or transmitted in any form or by any means, or stored in a database or retrieval system, without the written permission of the author.

This is a work of fiction. Names, characters, places, and incidents are either a product of the author’s imagination or are used fictitiously. Any resemblance to actual people living or dead, events or locales is entirely coincidental.

To learn more about this author and her writing, visit her website
www.slscottauthor.com

To my husband ~ If I could give you the world, I would. But since I can’t, I’ll give you my love instead, forever and a day.

To my nearest and dearest ~ Flavia, Jada D’Lee, Kerri, Kirsten, LemmieJen, Susi, Suzanne, Sydney, Yennifer ~ Thank you all for being you and for your amazing support.

Thank you, Lisa, for using your insight during the very early stages of this manuscript.

Thank you, Wyndy, for working your magic on this story and making it shine.

Thank you
, Mary Whitney. You are an amazing person and an even better friend.

To my online family ~ thank you for the support you’ve always given me. I send much love to each of you.

Lawson’s back hurt and his face had three new scratches—one above his left eyebrow that stung, and two other smaller ones on the right side of his jaw.

He had just finished debating with a customer—politely, of course—who insisted that an eight-foot Christmas tree could fit into the back of her small hatchback. After measuring the inside of the vehicle to prove that it could only fit a six-footer without damage to the top of the tree, she still insisted they try to fit the larger tree. The next ten minutes were spent maneuvering the tree at an angle inside the car while still trying to protect the pristine point from being damaged.

The owner of Winter Wonderland, his boss, walked up and collected the money for the tree from the customer just as Lawson hopped out of the car. After the business-side was handled, Lawson waved his arm in front of him, giving the car owner the honor of shutting the back. He knew it wouldn’t shut and gave one last warning. “I really think we should trade this out for a shorter tree. We’ve got some beautiful six-foot Firs in the back corner.”

She shook her head defiantly, feeling smug in her insistence. Just as she slammed the hatchback closed, they all heard a snap.  “Oh no!” she exclaimed.

Pressed against the window was a broken tree top. From behind the cash register, his boss shouted, “Sorry. No refunds. Lawson, it’s your break time.”

Lawson stepped closer then looked back over his shoulder. As soon as he saw his boss leave the area, he said, “If you’d like, I’ll reshape the top of that tree for you. It will look like it was
always meant to be six feet
.”

He spent twelve minutes of his lunch break helping the customer out—a customer who drove away from the Christmas tree lot with a smile on her face. She had tipped Lawson five dollars, and he knew exactly how he’d spend it.

After tossing his
work
gloves on the shelf next to the register stand, he rubbed the fresh wound above his eyebrow again, and told his co-worker, “I’m taking off. I’ll be back in a bit.” He hoped he still had enough time to grab a coffee from his favorite coffee shop.

There was a chain coffee place closer to the tree lot, but he liked the one two blocks farther down best. He didn’t lik
e it for its coffee, though there’s was quite good
. He liked the staff there and found them friendly. But a petite brunette barista was his favorite, and he couldn’t stop thinking about her.

As Lawson started for the coffee shop, his buddy on the lot began teasing him. “Going for another cup of Joe? How many times have you gone over there this week? Four?”

“Maybe… maybe five.” Lawson turned, and began walking backwards so he could jab back. “You still stalking
that bartender down at O’Sullivan
’s?”

“Changing the subject is a sure sign that you have it bad.”

His co-worker belly-laughed, leaning his elbows on the counter. “That’s either the best damn coffee in town she’s serving over there, or you’re a goner.”

“I was a goner the first time I ever laid eyes on her, my friend.”

The playful taunts continued, and Lawson should’ve been paying better attention, but with his back to the world, he ran right into someone.

He turned quickly with his hands out, losing his balance and struggling on the slick ice. Hearing a scream from behind him, he reached out to help, but ended up toppling them both over. After falling right on top of the person, he soon realized there was a woman beneath him.

Though it was freezing outside, both of their faces heated as they stared straight into each other’s eyes. He instantly recognized the green-eyed girl as the barista from the coffee shop, and her eyes went wide as she lay beneath him. He hoped she couldn’t feel his excitement to see her and how he considered their current compromising position quite the turn-on.

Scurrying to get up, he slipped on the icy ground again, landing next to her. They both laughed, nervously, and tried again. This time, he paid special attention to his footing and stood, planting his feet down firmly before offering to help the pretty girl up.

Apologies abounded as she staggered to her feet. She looked down and he wondered if she was hiding
her pinking cheeks. “You’re him,
”
she said softly.

Looking up, she glanced towards the manmade forest to their right. “From the tree lot… from here.”

They stood together, facing each other, still holding hands, neither knowing if it was for stability on the slippery ground or because they just wanted to be holding the others hand.

An awkward moment later, they released their grip, not because they wanted to, but because society dictated that as the proper thing to do. She blushed, and he looked down at his feet with more awkward apologies following. “I’m sorry for knocking you over. I should’ve been watching where I was going.” He paused then said, “But I’m not sorry for running into you at the same time. I was heading over to the coffee place—”

“Oh, I’m keeping you. Sorry about that. I’ll let you go, so you can get your coffee.”

“You were?” She didn’t wait for him to answer and took advantage of his attention. “I’m Christina.”

His eyes stayed fixed on her bright and gleaming eyes. Her soft smile revealed she was happy to see hi
m, too, so h
e smiled and stuck his hand out. “I’m Lawson. It’s a pleasure to meet you.”

This time, they allowed the discomfort of politeness to wash over them, and they held each other’s hand tightly and selfishly, just because they wanted to.

The wind blew and strands of her light brown hair floated over her face, hiding her smile from him. Without thinking, he took hold of her knit hat and straightened it then very gently pushed the fluttering hair off of her cheeks.

She remained perfectly still as his hand
s caressed her face
, watching him.

He coughed, breaking the moment. “I’m heading home for lunch. Would you like to join me?” he asked, hoping she’d say yes, though he knew it was a risk being this forward.

“I have a salad with my name on it waiting at my apartment.” With a devilish smile playing across her full lips, she added, “Maybe we can eat together. Do you want to come over? I can make you a sandwich.”

“Okay,” he said, feeling on top of the world that his dream girl had just invited him over. There was something about this girl that felt so right, and he wanted to be wherever she was going. But the effects of having his crush in such close proximity were starting to engulf him, so he shifted his stance, hoping she wouldn’t notice his
growing affections
. He nodded his head to the side. “You ready?”

On that acceptance, they walked the remaining block chatting about the weather. They approached a somewhat dilapidated five-story walk-up, and in sync, pointed and said, “Here we are. This is me.”

With a
smile gracing her face, she said, “Well, what a coincidence.”

“Quite the coincidence, indeed.”

Through a shared laugh, they walked inside and stood at the landing of the stairs. Lawson took the lead this time. “How come I’ve never seen you before?”

“Maybe you just never noticed me.”

“Oh, I would have noticed you all right.”

She shrugged. “I’ve been here all along.”

He looked at her sweet expression and watched her sigh as if her beauty escaped the world’s notice. “I’m well aware of you now.”

“And so you are.” She started up one stair, but turned back. “
Maybe we work
different hours. Most days, I’m at work by six a.m. and home by four or five. Apartment 3B is right up here.”

“I get to work around noon and work until ten. Yeah, it must be the different schedules.”

They climbed the rest of the stairs to the apartment and went inside. Lawson liked the
hominess of the small place
, but also noticed the room lacking something very important. “No Christmas tree?”

Christina tossed her keys down on the console by the door then slid her coat down her arms.  “No, unfortunately. I don’t have a lot of spare money this year, and my family can’t afford to help out.” She hung her coat on a hook on the back of the door then walked into the kitchenette.

“You’re always at the lot looking at the trees though?” He hoped his confession that he had seen her there on countless occasions wouldn’t turn her off. He shed his own coat and hung it on the empty hook next to hers.

With coffee mugs in hand, she stopped what she was doing, slowly turned around, and asked, “So, you’ve seen me?”

“I’ve, uh, noticed you at Wonderland a few times,” he said, knowing he was busted, but trying to play it off.

She set the mugs on the counter, walked over, and, stopped right in front of him. “Just a
few
times?”

He could feel the heat emanating from her closeness and wanted more. She was like the sun on a cold winter’s day. He took a step closer, needing more of that warmth, suddenly needing more of her, the woman that was so unaware of her beauty and what it did to him. He gulped. “You’re really beautiful.” Taking a chance, he stole one more step between them, closing the gap. Finally, taking her by the hands, hands that were stil
l chilly from the walk home,
he leaned into her.

With her eyes closed, she waited, lips slightly parted. He knew she thought he was going to kiss her and could tell that she really wanted him to. Instead, he whispered, “You’re incredibly sexy, too.”

All of the fantasies she had of him were about to be realized, so she took a deep breath, and molded her body against his as the warmth of his breath covered her neck. That combined with his voice and smell, shot straight to the center of her existence. She turned and found his mouth, taking him, forthright.