All I Want For Christmas Is A Werewolf (Changeling Encounters) 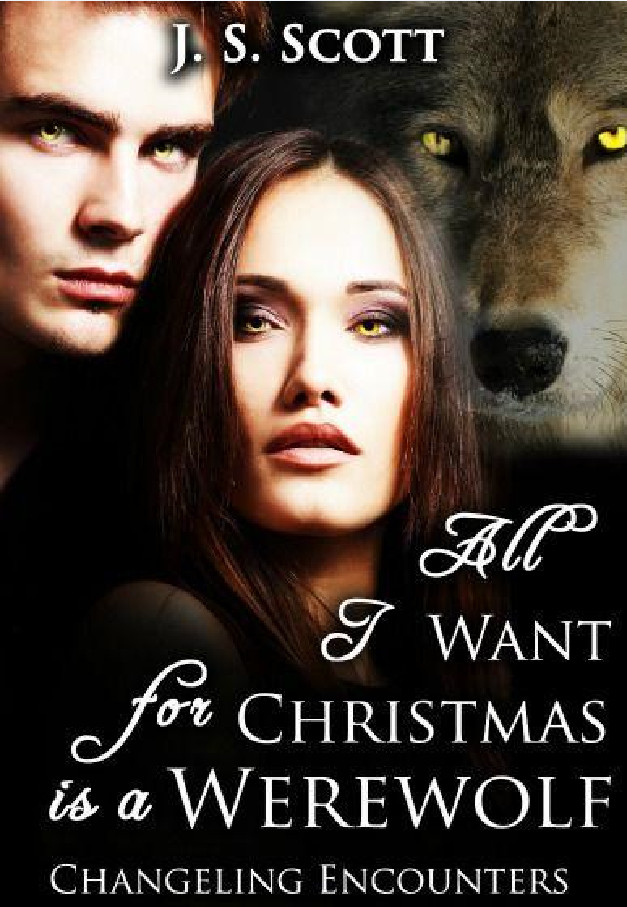 All I Want For Christmas Is A Werewolf (Changeling Encounters)
By J.S. Scott
Copyright© 2012 by J.S. Scott
All Rights Reserved

Excerpt of Mine For Tonight

It wasn't just a mild distaste for the season, or even something similar to ambivalence or disinterest about the December holiday.
Nope.
It was a total and complete aversion, an absolute loathing for all things green and red, anything associated with the period between Thanksgiving and New Years, the time when everyone was full of artificial good cheer and nauseatingly jolly.

Thank God, everything will go right back to normal after January 1st! Everyone will revert back to being greedy, self-serving, calculating and rude...

His two brothers called Gavin
The Grinch
.
Really, it wasn't like he was trying to
steal
Christmas, he just wanted it to be fucking - over!

Unfortunately, it was only the end of November, the day after Thanksgiving.
Black Friday, the day when all of those supposedly happy people full of the holiday spirit trampled each other just to save a few bucks.
What in the hell was so joyful about this peculiar custom he would
never
understand.

Merry Fucking Christmas...Now get the hell out of my way before I break your fingers for touching the item I want that's on sale. Ho Ho Ho!

So why was he here at the mall, at eight o'clock in the evening, on the busiest damn shopping day of the year?
It certainly wasn't because he was looking for bargains or got a kick out of finding good deals.
Fuck!
He was a millionaire, able to buy anything he wanted at a regular, reasonable price.
In his opinion, Black Friday was for masochists, people who enjoyed torturing themselves.

He was here for one reason and one reason only.
Zoey, his twin brother Rafe’s mate, had called him because he just happened to be in the city tonight on business and she had used that calculating, sweet voice of hers to manipulate him into stopping at the mall to pick her up a new laptop computer.

Please, Gavin. I really want this computer and they'll run out of them if I don't get one now.

If it had been Rafe who had asked, Gavin would have had no problem telling his brother to go straight to hell.
But the bastard had gotten
Zoey
to call,
Zoey
to ask, and Gavin hadn't been able to say no.

Really, he needed to get more of a backbone when it came to his sisters-in-law.
Zoey and Grace could get him to do almost anything for them.
All they had to do was call him up, ask sweetly, and he was jumping through hoops to get them anything they wanted, doing whatever they requested, regardless of how inconvenient it might be for him.

He felt sorry for Rafe and Noah.
At least he only got an occasional call from Grace or Zoey, and usually their requests were
fairly
reasonable.
Except tonight!
His two brothers actually had to
live
with Grace and Zoey, were mated to them, at their females' beck and call every waking moment of every damn day.
Sure, Rafe and Noah both had a live-in sex partner, available and convenient, but at what cost?

Gavin jockeyed through the masses of bodies around him, trying to plow his way through the crowd to get to the computers in the filled-to-capacity, popular electronics store.
He cursed as he took an elbow to the gut and was propelled forward with a vicious slam of a shopping cart to his ass.

Christ!
What the hell was he doing here?
It wasn't like Rafe couldn't afford to pay full price for the damn computer. Both of his brothers were as wealthy as Gavin.
Unfortunately, Zoey knew exactly how to get to him, pleading that she needed the computer right away, that she
really
wanted it,
really
needed it.

Sucker...it's your own fault for answering your cell phone. You could be home right now, out of the city, relaxing with an excellent glass of wine and reclining in your hot tub.

Instead, he was surrounded by glassy-eyed people in a bargain-hunting frenzy.
What the hell was it about Black Friday that sent a perfectly normal community into temporary insanity?

A low snarl escaped his throat as he reached for a box that contained the computer that Zoey had requested, his patience wearing thin.
His wolf was pacing, anxious; it hated the city and the masses of people around him.
Gavin sucked in a deep breath, taking air in through his nose for the first time since entering the store.
He'd tried to avoid the scent of the crowd - his sense of smell was sensitive, and some of the bodies colliding with his had clearly not practiced particularly good hygiene.

A small, delicate hand landed on top of his; the simple touch making every hair on his body stand on end.
He hissed as he inhaled a scent he thought he would never experience again.

The fragrance of his mate.

Gavin’s olfactory sense kicked into overdrive and he struggled desperately not to let her fragrance absorb into every pore in his body, but he failed miserably, his
Changeling
mating instinct too strong.
Her sweet bouquet surrounded him, consumed him, within seconds.

His cock swelled as the essence of
her
overwhelmed him, ripping away his common sense and control, leaving only animal instinct.
The desire to claim his mate.

His feral gaze trailed upward as his heart thundered against the wall of his chest.
Her hand jerked away and he almost groaned with disappointment as he was deprived of the feel of her skin against his.
Grasping the computer box, he scooped it up and put it under his arm, his eyes raking over every feature, every detail of the female who had his undivided attention.

She was short, curvy, dressed in jeans and a sweater that was topped by a pink quilted vest.
Thick glasses sat on the bridge of an adorable, button nose.
Her light skin was flushed, and Gavin could feel her unease.
She nervously pushed a strand of straight, silky brown hair behind her ear.
Gorgeous hair that brushed her shoulders, that he wanted to reach out and touch, bury his hand into, nuzzle his face into, until all he could feel and smell was
her.

Gavin had to clench his fists to keep from reaching for her,
from taking what belonged to him.
As his gaze met hers, it was her terrified expression that stopped him
. Christ! He was scaring the hell out of her
.
No doubt his growling and possessive expression were a bit much, even if it
was
Black Friday.

"Here.
You take it.
It's the last one."
He held out the computer like a peace offering, fighting every carnal instinct in his body to try not to frighten her.

God, her voice was sweet, low and husky, seductive.
He yearned to hear her cry out his name as he buried his pulsating cock into her body, claiming her, satisfying her.

She turned and began to jog away.
Fuck! She's afraid of me!
He followed, elbowing his way through the crowd, trying not to lose sight of her curvaceous ass while he followed in her wake, sweat dripping from his brow, his heart slamming.

She was fast, dodging through the crowd, ducking under arms and bodies, pushing her way out of the store as though the devil were on her heels.
Gavin cursed, trying to gain ground without knocking people to the floor.
He was desperate, and his urgency increased twofold as she tried to get away from him.
His wolf snarled, excited by the chase, wanting to track down its prey.
Gavin, the man, was just as aroused.
He wanted to catch her, strip her, pin her to the wall and fuck her until she begged for mercy.

Fleeing from a
Changeling
mate only increased his need to catch and dominate, inflamed his already out-of-control desire.

Gavin pursued her, his hand about to grab her around the waist, when he was seized by several security guards.
Irritating buzzers blasted loudly as he crossed the exit, the barrier protected with alarms.

His wolf howled, the grating noise reverberating inside Gavin’s head.
He fought, trying to contain his beast, unable to determine, for one frightening moment, whether the victor would be man or canine as his hungry eyes watched the retreating backside of his mate.

He stopped struggling against the men who were restraining him.
He could have easily laid them both out on the ground, unconscious...or worse.
But the man in him wouldn't allow it; he wasn't about to injure two men who were just doing their job - no matter how badly his wolf wanted him to.

No! Damn it. I don't want a mate. It's too fucking painful.

Gavin stepped back, allowing the two men grasping his arms to propel him back into the store.
He'd have to deal with them, and he would, as soon as he could tear his gaze away from the rapidly fading image of his mate, growing smaller and smaller as she fled further and further away from him.

It took everything he had, every ounce of strength in his body not to break away and pursue her until he had her well and truly caught.
His wolf instinct demanded it, growling and howling in despair as Gavin struggled - with himself.
Conflicted, one part wanting to haul ass after her, the other part wanting to get as far away from her as possible, he jerked his gaze away from her retreating figure.

Gavin took another step back, trying to shake off the shudder that moved violently through his body, caused by the mounting distance between himself and his newly-discovered mate.

He took a deep breath, her scent lingering on his skin, consuming him with every second that passed, knowing from experience that the insanity wouldn't leave him.

It was worse this time, much more intense.
The only things holding him back were his human self and his emotions - namely his fear.
Fear was a powerful motivator, an excellent reason for him to ignore his wolf.
Problem was it wasn't just his wolf that wanted her.
He was a
Changeling
, and nearly every cell in his body reached for her, ached for her to complete him, and he wasn't so sure that fear alone could win
this
war.

Eyes narrowing, his glance shot back to the last spot he had seen her, needing to connect with her in some way, desperate for something, anything, that would calm the storm raging inside of his body and mind.

But just that quickly, she was gone.

Faith Prescott exited the dollar store in the mall quickly, a sense of urgency hurrying her steps, not exactly sure
why
she was feeling so on-edge.

She shivered, not from the cold, but from...
anticipation
?
Shaking her head in confusion, trying to clear her muddled brain, her eyes searched for her vehicle in the dark parking lot, trying not to let the image of
him
blur her vision.

Piercing sapphire-blue eyes, blond silky hair cut in a windblown style that suited his sculpted face, and his big, massive body that was made for sin, were pretty damn difficult to ignore.
Dressed in an immaculate suit and a deep blue tie that matched his eyes, he had been...breathtaking...and her reaction to him had been nothing short of intense.

Sandra Hill - [Vikings I 02] by The Outlaw Viking
Ghost in the Cowl by Moeller, Jonathan
Potshot by Parker, Robert B.
Austerity Britain, 1945–51 by Kynaston, David
Come What May by E. L. Todd
Stolen with Style by Carina Axelsson
Beast Behaving Badly by Shelly Laurenston
Color Me Bad: A Novella by Sala, Sharon
Taken: A One to Take Primer by Tia Louise
CLEAN ROMANCE: Finding Peace (Christian Romance, Inspirational Romance, Second Chance Romance) (New Adult Contemporary Romance/Clean and Wholesome) by Grace Warren
Our partner