Read All In: (The Naturals #3) Online 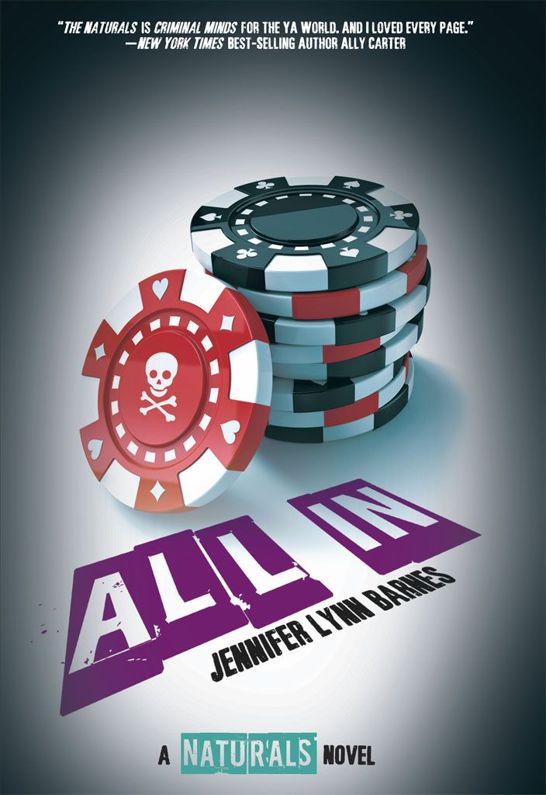 All rights reserved. Published by Hyperion, an imprint of Disney Book Group. No part of this book may be reproduced or transmitted in any form or by any means, electronic or
mechanical, including photocopying, recording, or by any information storage and retrieval system, without written permission from the publisher. For information address Hyperion, 125 West End
Avenue, New York, New York 10023.

For Anthony, my partner
in crime, now and always.

Anything can be counted. The hairs on her head. The words she’s spoken to you. The number of breaths she has left.

It’s beautiful, really. The numbers. The girl. The things you have planned.

The thing you’re destined to become.

N
ew Year’s Eve fell on a Sunday. This would have been less problematic if my grandmother hadn’t considered “Thou
shalt gather thy family for Sunday dinner” an inviolable commandment, or if Uncle Rio had not appointed himself the pourer of wine.

There was a lot of wine.

By the time we were clearing away the plates, it was pretty clear that none of the adults would be driving themselves home anytime soon. Given that my father had seven siblings, all of them
married, several with kids a decade or more my senior, there were a lot of “adults.” As I carried a stack of plates into the kitchen, the dozen or so arguments brewing behind me were
almost, but not quite, drowned out by the sound of boisterous laughter.

Viewed from the outside, it was chaos. But viewed with a profiler’s eye, it was simple. Easy to understand. Easy to make sense of. This was a family. The
kind
of family, the
individual personalities—those were there in the details: shirts tucked and un-tucked, dishes chipped but handled with love.

“Cassie.” My great-uncle bestowed upon me a beatific, bleary-eyed smile as I came into the kitchen. “You miss your family, eh? You come back to visit your old Uncle
Rio!”

As far as anyone in this house knew, I’d spent the past six months at a government-sponsored gifted program. Boarding school, more or less. Parts of that were true.

“Bah.” My grandmother made a dismissive noise in Uncle Rio’s general direction as she took a stack of plates from my hands and transferred them to the sink. “Cassie did
not come back for old fools who drink too much and talk too loud.” Nonna rolled up her sleeves and turned on the faucet. “She came back to see her nonna. To make up for not calling like
she should.”

Two guilt trips, one stone. Uncle Rio remained largely unfazed. I, on the other hand, felt the intended twinge of guilt and joined Nonna at the sink. “Here,” I said. “Let
me.”

Nonna harrumphed, but slid over. There was something comforting about the fact that she was exactly the same as she’d always been: part mother hen, part dictator, ruling her family with
baked ziti and an iron fist.

But I’m not the same.
I couldn’t dodge that thought.
I’ve changed.
The new Cassandra Hobbes had more scars—figuratively and literally.

“This one gets cranky when she does not hear from you for too many weeks,” Uncle Rio told me, nodding at Nonna. “But perhaps you are busy?” His face lit up at the
prospect, and he studied me for several seconds. “Heartbreaker!” he declared. “How many boyfriends you hide from us now?”

“I don’t have a boyfriend.”

Uncle Rio had been accusing me of hiding boyfriends from him for years. This was the first and only time he’d ever been right.

“You.” Nonna pointed a spatula—which had appeared in her hand out of nowhere—at Uncle Rio. “Out.”

He eyed the spatula warily, but held his ground.

Three seconds later, Nonna and I were alone in the kitchen. She stood there, watching me, her eyes shrewd, her expression softening slightly. “The boy who picked you up here last
summer,” she said, “the one with the fancy car…He is a good kisser?”

“I have eight children,” Nonna told me. “I know about the kissing.”

“No,” I said quickly, scrubbing at the plates and trying not to read too much into that statement. “Michael and I aren’t…We don’t…”

“Ahh,” Nonna said knowingly. “His kisses, not so good.” She patted me consolingly on the shoulder. “He is young. Room for improvement!”

This conversation was mortifying on so many levels, not the least of which was the fact that
Michael
wasn’t the one I’d been kissing. But if Nonna wanted to think that the
reason my phone calls home had been so few and far between was because I was caught in the throes of young romance, let her.

That was an easier pill to swallow than the truth: I’d been subsumed into a world of motives and victims, killers and corpses. I’d been held captive. Twice. I still woke up at night
with memories of zip ties digging into my wrists and the sound of gunfire ringing in my ears. Sometimes, when I closed my eyes, I saw light reflected off of a bloody blade.

“You are happy at this school of yours?” Nonna made her best attempt at sounding casual. I wasn’t fooled. I’d lived with my paternal grandmother for five years before
I’d joined the Naturals program. She wanted me safe, and she wanted me happy. She wanted me
here
.

“I am,” I told my grandmother. “Happy.” That wasn’t a lie. For the first time in my life, I felt like I belonged somewhere. With my fellow Naturals, I never had to
pretend to be someone I wasn’t. I couldn’t have, even if I’d wanted to.

In a house full of people who saw things the rest of the world missed, it was impossible to hide.

“You look good,” Nonna admitted grudgingly. “Better now that I have fed you for a week.” She harrumphed again, then gently shoved me to the side and took over washing the
dishes. “I will send food back with you,” she declared. “That boy who picked you up, he is too skinny. Maybe he will kiss better with a little meat on his bones.”

“What’s this about kissing?” a voice asked from the doorway. I turned, expecting to see one of my father’s brothers. Instead, I saw my father. I froze. He was stationed
overseas, and we weren’t expecting him for another couple of days.

It had been over a year since the last time I’d seen him.

“Cassie.” My father greeted me with a stiff smile, a shade or two off from the real deal.

My thoughts went to Michael. He would have known exactly how to read the tension in my father’s face. In contrast, I was a profiler. I could take a collection of tiny details—the
contents of a person’s suitcase, the words they chose to say hello—and build the big picture: who they were, what they wanted, how they would behave in any given situation.

But the exact meaning of that not-quite-a-smile? The emotions my father was hiding? Whether he felt a spark of recognition or pride or anything fatherly at all when he looked at me?

That, I didn’t know.

“Cassandra,” Nonna chided, “say hello to your father.” Before I had a chance to say anything, Nonna had latched her arms around him, squeezing tightly. She kissed him,
then smacked him several times, then kissed him again.

“You are back early.” Nonna finally pried herself away from the prodigal son. She gave him a look—probably the same look she’d given him when he’d tracked dirt in
on her carpet as a little boy. “Why?”

My father’s gaze flitted back to me. “I need to talk to Cassie.”

Nonna’s eyes narrowed. “And what is it you need to talk to our Cassie about?” Nonna poked him in the chest. Repeatedly. “She is happy at her new school, with her skinny
boyfriend.”

I barely registered that assertion. My attention was fully focused on my father. He was slightly disheveled. He looked like he hadn’t slept at all the night before. He couldn’t quite
look me in the eye.

“Nothing,” Nonna said, with the force of a sheriff declaring martial law. “Nothing is wrong.” She turned back to my father. “You tell her nothing is wrong,”
she ordered.

My father crossed the room and took my shoulders gently in his hands.

You’re not normally this gentle.

My brain ran through everything I knew about him—our relationship, the type of person he was, the fact that he was here at all. My stomach felt like it had been lined with lead. I knew
with sudden prescience what he was going to say. The knowledge paralyzed me. I couldn’t breathe. I couldn’t blink.

“Cassie,” my father said softly. “It’s about your mother.”

The Lost City of Faar by D.J. MacHale
State of Emergency by Marc Cameron
The Wedding Date by Jennifer Joyce
Blackmail Earth by Bill Evans
The Furthest City Light by Jeanne Winer
We All Looked Up by Tommy Wallach
Snowstop by Alan Sillitoe
James Asher 1 - Those Who Hunt The Night by Hambly, Barbara
Sarasota Bride by Scott, Talyn
Between Friends by Lou Harper
Our partner