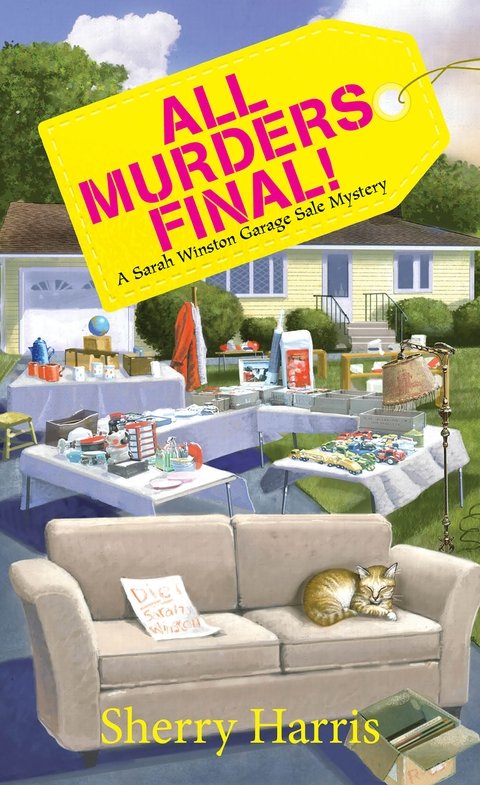 Praise for
Tagged for Death
“
Tagged for Death
is skillfully rendered, with expert characterization and depiction of military life. Best of all Sarah is the type of intelligent, resourceful, and appealing person we would all like to get to know better. Hopefully, we will have that opportunity very soon!”
Lynne Maxwell,
Mystery Scene Magazine
“A terrific find! Engaging and entertaining, this clever cozy is a treasureâcharmingly crafted and full of surprises.”
Hank Phillippi Ryan, Agatha-, Anthony- and
Mary Higgins Clark-award-winning author
“Like the treasures Sarah Winston finds at the garage sales she loves, this book is a gem.”
Barbara Ross, Agatha-nominated author of the Maine
Clambake Mysteries
“It was masterfully done.
Tagged for Death
is a winning debut that will have you turning pages until you reach the final one. I'm already looking forward to Sarah's next bargain with death.”
Mark Baker, Carstairs Considers
Praise for
The Longest Yard Sale
“I love a complex plot and
The Longest Yard Sale
fills the bill with mysterious fires, a missing painting, thefts from a thrift shop and, of course, murder. Add an intriguing cast of victims, potential villains and sidekicks, and interesting setting, and two eligible men for the sleuth to choose between and you have a sure winner even before you get to the last page and find yourself laughing out loud.”
Kaitlyn Dunnett, author of
The Scottie Barked at Midnight
/
Kathy Lynn Emerson, author of
Murder in the Merchant's Hall
“Readers will have a blast following Sarah Winston on her next adventure as she hunts for bargains and bad guys. Sherry Harris's latest is as delightful as the best garage sale find!”
Liz Mugavero, Agatha-nominated author of the
Pawsitively Organic Mysteries
“Sherry Harris is a gifted storyteller, with plenty of twists and adventures for her smart and stubborn protagonist.”
Beth Kanell, Kingdom Books
“Once again Sherry Harris entwines small-town life with that of the nearby Air Force base, yard sales with romance, art theft with murder. The story is a bargain, and a priceless one!”
Edith Maxwell, Agatha-nominated author of the
Local Foods mystery series
Also by Sherry Harris
Agatha-Nominated Best First Novel TAGGED FOR DEATH
Â
and
Â
THE LONGEST YARD SALE
ALL MURDERS FINAL!
Sherry Harris

The Memory Game by Nicci French
Undone by Kristina Lloyd
The Fairy Tales Collection by Elizabeth Kelly
Fala Factor by Stuart M. Kaminsky
Mudlark by Sheila Simonson
The Merlin Effect by T. A. Barron
The Five Kisses by Karla Darcy
April 4: A Different Perspective by Mackey Chandler
Acceptable Loss by Anne Perry
The Saint of Dragons by Jason Hightman
Our partner