Read All My Secrets Online 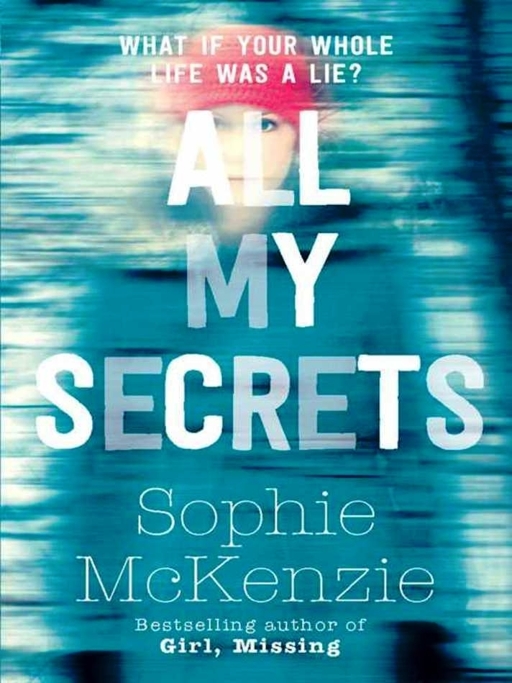 Six Steps to a Girl

The One and Only

The right of Sophie McKenzie to be identified as the author of this work has been asserted by her in accordance with sections 77 and 78 of the Copyright, Designs and Patents
Act, 1988.

This book is a work of fiction. Names, characters, places and incidents are either the product of the author’s imagination or are used fictitiously. Any resemblance to
actual people living or dead, events or locales is entirely coincidental.

If I hadn’t answered the doorbell that afternoon, would I ever have known the truth? Or would Dad have found a way to carry on hiding it from me? After all, if Mr Treeves
had turned up just a few days earlier, I’d still have been at school enduring a long, long week of GCSE exams. But that’s what my life turned on: a riddle wrapped in a coincidence,
bound tightly by a lie.

And covered up with a massive secret . . .

So, the exams are all done and it’s the middle of the afternoon, but I’m still in PJ bottoms and one of Mum’s old sweatshirts, lolling on the sofa and thinking about making
some hot chocolate. The window is open and a warm breeze is drifting through when the doorbell rings. Actually, it chimes, an annoying sound that Mum for some reason thinks is classy because it was
featured on some stupid home makeover programme. She’s always redecorating the living room. And their bedroom. And the twins’ room. Dad puts up with it all in his solid, steady way. But
he’ll get totally on my case if I don’t answer the door just because I feel lazy.

Even so, I wait a sec to see if he’ll come. Some hope. He’s in his office, at the top of the house, and he knows full well that I’m down here. The chimes sound again.

I sigh and haul myself up from the sofa. Dad and I are the only ones at home right now as Mum’s gone to pick up Jade and Jess from school. As I plod to the front door, I catch sight of
myself in the hall mirror. I’ve been growing my hair for nearly a year and it’s now past my shoulders. It’s dark and shiny. Which is good. But the ends are
really
split,
as Mum never tires of pointing out. ‘Like rats’ tails,’ she always says. Still, I prefer it long and uncut and it’s my hair.

I don’t even think about being in my PJs until I’m actually opening the door. Then I feel a bit self-conscious because a man is standing outside in a suit. He’s short –
no taller than I am – and dapper with slicked back hair and a tightly knotted blue tie.

He stares at me for a second. ‘Evelina Brown?’ he asks. He has a soft Scottish accent.

I nod, a self-conscious knot twisting in my stomach. The man is looking at me in this weird way, like he
knows
me. Which I’m certain he doesn’t.

‘I’m Mr Treeves, solicitor with Stirling, McIntyre and Cox. Er . . . may I come in and talk to you for a minute?’ he asks.

Now he’s seriously freaking me out.

Jeez, am I in some kind of trouble? I rack my brains, trying to think if there’s anything I could possibly have done that would mean a lawyer calling round. Nope.

There’s an awkward moment while Mr Treeves and I wait on either side of the front door, then Dad pads downstairs, barefoot in his jeans, rubbing his forehead like he always does when
he’s distracted.

‘Do you need me to sign for some—?’ He stops as he catches sight of Mr Treeves. He smiles. ‘You’re not delivering a parcel, are you? How can I help?’

Mr Treeves visibly relaxes. Dad tends to make people feel comfortable like that. All my friends love him. What they don’t see is how strict he can be about going out and staying in touch
and coming home at what he calls ‘a decent hour’.

Mr Treeves wrinkles his nose. ‘It’s a legal matter.’ He hesitates, clearly not wanting to say more until he’s properly inside.

‘Very well.’ Dad glances at me, eyebrows raised. I shrug. I have no more idea what’s going on than he does. ‘Let’s go into the living room.’

A few seconds later, we’re all sitting down: Dad and me on the sofa, Mr Treeves perched anxiously on the edge of an armchair.

‘Please don’t be concerned; this is good news,’ Mr Treeves says, fishing some papers out of his briefcase. He looks up at me. ‘You’ve been left some money in a
trust fund, Evelina.’

‘A way of investing money.’ Mr Treeves hesitates. ‘In this case, a considerable amount. You inherit it when you’re sixteen at the end of August. As I say, we’ve
been trying to track you down for a while now.’

I can’t take it in. I’ve been left
money
? Who on earth from? I look at Dad He’s frowning.

I gasp. Is he serious? I look at Dad again. His jaw is hanging open. He’s clearly as stunned as I am.

At that moment the front door opens and the hall fills with Jade and Jess’s shrieks.

‘She
promised
she would let me have a go, Mum!’ Jade is whining.

‘But it’s
mine
!’ Jess, as usual, sounds utterly outraged.

A second later, my eight-year-old twin sisters, Jade and Jess, have barrelled their way into the living room. They’re brought up short as they spot Mr Treeves, then dart away, out of
sight. Mum puts her head around the door as they push past her.

‘Oh, hello.’ She glances at Dad, clearly expecting him to perform an introduction. But Dad is still sitting stock-still, mouth gaping.

‘Evie?’ Mum turns to me, her eyes all curiosity.

It’s the last moment that I trust her. Or Dad.

I stand up beside Mr Treeves. ‘Somebody’s left me ten million pounds in a . . . a trust fund or something.’ I turn to Mr Treeves, ignoring the widening of Mum’s eyes.
‘Who is it?’

‘You’ve been left the money by an Irina Galloway.’

Across the room, Mum slaps her hand over her mouth. Dad lets out a low moan.

I turn to Mr Treeves. ‘Who on earth is Irina Galloway?’

‘What’s going on?’ I demand. ‘Who is Irina Galloway? How do you know her? Why has she left me all this money?’

‘She has to know.’ Mr Treeves is talking to Mum and Dad now. ‘If you don’t tell her, I’m afraid I must.’

‘No.’ Mum is clinging to the door. Tears well in her eyes.

‘Tell me what?’ Fear and dread rise inside me.

Mr Treeves draws himself up. ‘I realise now, having talked to you. Evie, that this will come as a shock,’ he says, a little shake in his voice. ‘But Irina Galloway is . . . was
. . . your mother.’

There’s a terrible silence. Mr Treeves shuffles from side to side, but I’m frozen to the spot. I sense Mum looking at me from the doorway. Dad sinks back down onto
the sofa, his head in his hands.

‘How?’ The word squeezes out of me. I turn to my parents. Dad is staring down at the ground, but Mum meets my gaze.

Except, if Mr Treeves is right, she isn’t my mother at all.

There is terror in her eyes.

‘I don’t understand,’ I stammer.

Mr Treeves steps forward. He hands me a piece of paper.

‘This is your birth certificate,’ he says.

I look down, my eyes skittering over the words. Under ‘father’ it gives Dad’s details, but there, under ‘mother’, is the name ‘Irina Galloway’.

Dad stands up slowly. He seems to have aged about twenty years since he first sat down. I’ve never seen him so close to tears.

My jaw drops. I feel like I’ve been thrown out of a plane and I’m spinning, plummeting through the air.

Everything known and fixed is gone.

I sit down hard on the sofa. Mum rushes over and puts her arm around my shoulders. I shake it off, a thread of anger weaving through my shock.

‘I don’t understand,’ I say again.

Mum and Dad stay silent. A beat passes. Then Mr Treeves holds out a folder.

‘This contains details of the trust fund,’ he says. ‘As I said, we’ve been trying to track you down for a while. The fund has been well invested for fifteen years and,
well, I’ve told you about the money. It will be released to you on your sixteenth birthday at the end of August.’

Soul Ink by J. C. Nelson
Work Song by Ivan Doig
Nightsong by Karen Toller Whittenburg
The Secret to Success by Eric Thomas
Soul Of The Dragon (Her Dragon's Bane 1) by Harmony Raines
Love Finds You in Frost Minnesota by Judy Baer
Twisted Pursuits by Morrison, Krystal
Enticed (The Brazil Werewolf Series Book 3) by Amanda K. Dudley-Penn
Wife of the Gods by Kwei Quartey
Unintentional by Harkins, MK
Our partner