Read All My Sins Remembered Online

All My Sins Remembered 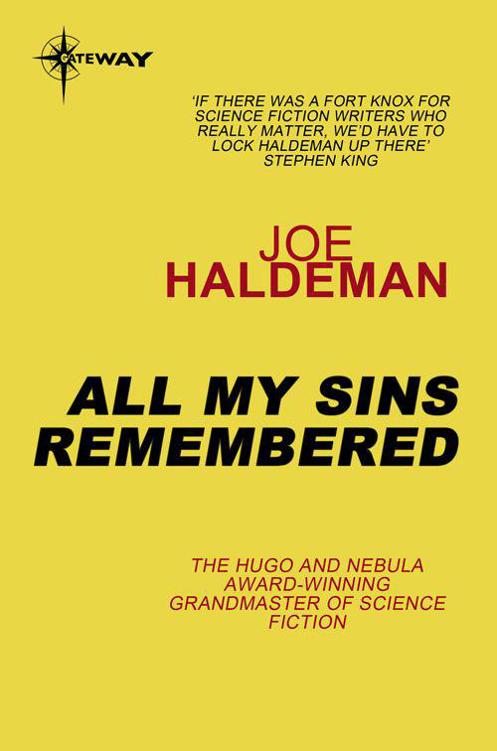 ALL MY SINS REMEMBERED

Episode: To Fit the Crime

Episode: The Only War We’ve Got

Episode: All My Sins Remembered

Do you feel anything?

Why do you desire a position with the Confederación?

I want to go places and do things. I have never left Earth. This is the most interesting way to do it. I believe in the Confederación, and want to help it protect the rights of humans and nonhumans.

Do the initials TBII mean anything to you?

To protect the rights of humans and nonhumans, would you lie, cheat, steal, and kill?

If enough depended on it, would you kill?

—McGavin finds himself walking down an alley in a strange city. There’s a small hard lump to the right of the small of his back. He checks; it’s a laser pistol. While it’s still in his hand, a figure jumps out of the shadows. “All yer money, cob,” he says. McGavin fires instinctively, killing him.

I don’t know. I think I would. And feel remorse, and wish his soul—

—The same alley, in shadow. Two men standing under a dim light ahead of him. One holds a knife. “Just chuck it over, an’ you won’t be hurt.” Otto shoots the brigand in the back, killing him.

I don’t think so. I would wait and see whether he actually intended to harm the man… and would first give him a chance to surrender.

—The same alley. Otto is peering into a window, laser in hand. Inside, a man sits drinking tea and reading. Otto’s assignment is to assassinate him. He aims carefully and shoots the man in the head.

Otto shook his head and looked at the clock on the office wall. “That didn’t take long,” he said.

“Rarely does,” the interviewer said. An attendant unstuck the electrodes pasted to Otto’s head, arms, and chest, and then left.

Otto slipped back into his shirt. “Did I pass?”

“Well, this is not the sort of test you ‘pass’.” He took a sheet of paper off the top of Otto’s application packet and slid it across the desk. “Please initial the ‘Interview Completed” box.

“There are various positions you’re undoubtedly eligible for. Whether there are openings, that’s another question.”

“Two or three days.” They shook hands and Otto left. The interviewer touched his ear, activating a communicator, and recited a sequence of numbers.

“Hello, Rafael? Just finished with that McGavin kid. Maybe you can use him.” He paused, listening.

“Well, his training, academic training, is appropriate. Politics and economics, subarea in xenosociology. Physical condition superb. Megathlon winner, reflexes like a cat. The only problem I see is attitudinal; he’s a little too idealistic. Religious.”

He laughed. “We certainly can. I’ll have the tapes sent up. Endit.”

There was hope for McGavin, he thought. In the second situation, he’d said he would give the man a chance to surrender… not a chance to get away.

Otto walked slowly along the broken slidewalk that over-looked the East River, enjoying the autumn breeze and the tang of ozone from the crawling stream of traffic beneath his feet. Approaching the UM building, he tried to contain his excitement. His first offplanet assignment.

He’d been to the Moon as part of his intensive and confusing training, but that was really just a suburb of Earth. This would be for real.

Georges Ledoux’s office was in the subbasement of the building. Getting out of the elevator you stepped through a search ring guarded by two tense armed men. Otto didn’t set it off.

The third door down had a small card saying G. Ledoux/Planning. It opened before Otto could knock.

“Come in, Mr. McGavin.” The office was a cheerfully cluttered place, piles of paper held down with bric-a-brac from a dozen worlds, a battered wooden desk, soft chairs covered with worn but real leather. Ledoux was a bald, slight man, also leathery, smiling. He motioned Otto to a chair.

“We’ll get to your assignment in a minute. First, I’d like to clear up a few things about what you’ve been doing the past two years. You know that a great deal of your training was under deep hypnosis.”

“That was pretty easy to figure out.”

“Quite so. Now it’s time to bring it up to the surface.” He glanced at a slip of paper in his hand. “Close your eyes… ‘atlas, beach ball, mantra, pest.’”

… black precipitate of iodine and ammonium hydroxide… in the kidney even superficial-seeming wound brings on shock… kick, don’t punch… go for the eyes… conceal the knife until you’re in range… short bursts to preserve power… fence with your head, not with your heart’… fingers stiff into soft area under sternum, aim for backbone… once he’s down kick his head… sell your life, don’t give it away…

“My God!’ Otto opened his eyes.

Ledoux picked up a heavy-bladed knife from his desk and hurled it straight at Otto’s heart. Otto plucked it out of the air without thinking.

“No. You know enough about it to masquerade as one. That’s all.”

“That’s right. And slated to be a prime operator after another year.”

Otto shook his head, as if to clear it.

“I know,” Ledoux said gently. “It’s not the cruise you signed up for.”

“This first assignment will not require any personality overlay”—the phrase triggered a memory of two months of training—“but will be TBII business, nevertheless. You’ll be assisting a prime operator named Susan Avery, on the planet Depot.”

“Arcturus IV,” Otto said, with a trace of wonder.

“Yes. She is on the planet as Olivia Parenago, Earth’s ambassador.”

“Where is the real Parenago?”

“Dead, murdered. Do you know what a ‘protection racket’ is?” Otto shook his head. “Well, it’s an obscure term for a specialized kind of blackmail. I come to you and offer not to burn down your place of business, with you inside, for a certain amount of money, paid regularly.”

“Sounds like something for the local authorities to take care of.”

“Normally, yes. Parenago got involved in it because she suspected it was affecting interstellar commerce—which technically would bring it into our sphere of influence. And the local authorities are evidently corrupt.

“With the murder of an ambassador, of course, there’s no question that it’s Confederation business. TBII business.”

McGavin nodded slowly. “Will I be impersonating anybody?”

“Only yourself. A junior attache. You’ll have to attend various functions, give out medals and plaques, that sort of thing. Mainly, you’ll be helping Avery with footwork, re-search—and violence, if there is any.”

“Think there will be?”

He shrugged. “The only ones on the planet who know about the substitution, besides you and Avery, will be the ones who killed Parenago. They killed her brutally.”

“You’re sure there was more than one?”

“At least three. Two held her arms and legs while the other killed her at leisure.”

Depot was a well-developed planet that moved in a tight orbit around Arcturus’s invisible companion Sleeper (“real” name TN Bootes AA). Sleeper was the closest tachyon nexus to Earth, so almost every outbound ship stopped at Depot to refuel and take on supplies.

Otto was stationed in Jonestown, the planet’s largest city. It had a university and a spaceport and was rougher, raunchier, dirtier, and noisier than anyplace he had ever been. He liked it.

He was walking with Susan Avery in the industrial park, where they wouldn’t be overheard. She was a few years older than he, intelligent and tough if not physically attractive (though there was no way to tell what she really looked like; she was a perfect xerox of Olivia Parenago). She had been a prime operator for five years.

“We may have a new informant,” she said.

“Better at staying alive than the last one?”

“We hope.” The first informant, a merchant who’d decided to stop paying, had died of an industrial accident during the half-hour that elapsed between his phone call to Parenago and her arrival at his place of business. He’d called the police first. “She’s a court recorder in the third district, I met her at a luncheon and she passed me a note. Through some jurisdictional technicality, she has access to police credit records.”