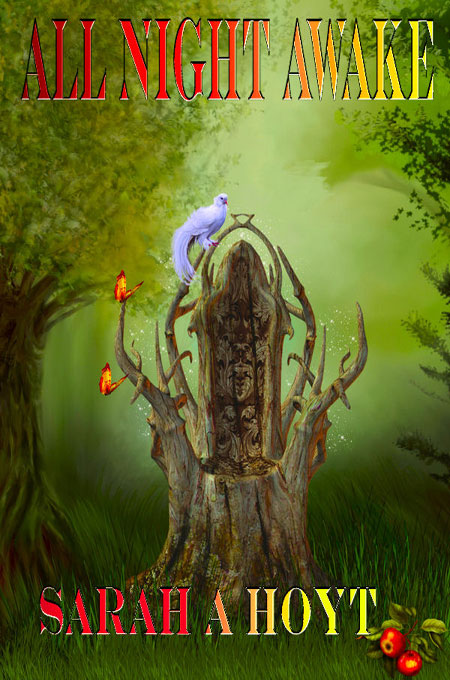 S
CENE
:
A wooden stage, looking very real and solid, amid swirls of yellow-green smoke or fog. On the stage three women sit on wooden stools, beside a painted hearth. A beautiful maiden spins the thread, a strong matron measures it, and a wrinkled crone cuts it with a pair of golden shears. A man appears at the edge of the stage. He’s a middle-aged man who looks insignificant, with his receding hair- line and dark curls that brush the shoulders of his cheap russet wool suit. Only his eyes, sharp and intent, golden as a bird of prey’s, hint at curiosity and intelligence. He walks to the center of the stage and faces the women.

W
ill does not know if he dreams or wakes.

He walks on a creaking stage with hesitant steps and knows not how he got here. Only minutes ago he slept in his own bed, in his rented room in London. By what magic has he been brought hence?

Three strange women face him. Women they look to be, women they seem to be, and yet something about them proclaims them something else.

“All hail Will Shakespeare!” The maiden lifts her head from her spinning. As her blond hair falls back, it shows that she lacks ears. “Hail to thee, great poet.”

Will jumps back, shocked both at deformity and greeting.

Great poet? Did she indeed greet Will thus? He could scant believe it for he knew that his poetical talent was as yet all dreams and none of it survived the harsh light of reality.

“All hail Will, whose verse generations yet unborn shall recite.” The matron looks up from the thread she winds and measures. Her smile shows feral, serrated teeth.

“All hail Will,” the crone pipes. Lifting her head, she shows no eyes amid the wrinkles on her withered face. “All hail Will, whom death shall not defeat.”

Scared, Will takes three steps back. This is a mocking dream that thus torments him with the possibility of his dearest hopes. He takes his hand to his collar and seeks to loosen it, as though by breathing deeply he might regain his footing in real life and the waking world.

“Live you?” he asks. “Are you aught that man ought to question? Do I dream, or am I awake? You look not like the inhabitants of the earth. You should be women, and yet strange women you are. What are you?”

“We are not women but that of which women are spun. We’re images of dream, creatures of the mind. Through us do human minds perceive all. Through us, the mold and form of female reality, do human minds see the force like a womb that, within the universe, spins all that’s female in the world of men,” the maiden says. “We were created before man was man, from the dim minds of brutes in their caves, and since then have we been in human minds and actions and dreams. Our presence the more real for being illusory, our power the more true for being imagined, encompasses all and shapes all. Thus does the imagined mold the real and the real the imagined again.”

“By us is all life threaded and measured and cut, ours the weaving of human fate,” the matron says.

“But ours will be the undoing and the death, should we not find a champion to defend us.” The crone’s hair flies wild, framing her face in snow-white tendrils.

“Defend us,” the maiden says. “And you shall be the greatest poet born of woman’s womb. Your plays will be heard, your verses repeated world without end.”

Will clenches his fists. They mock him. Surely they mock him. “Six months I’ve been in London and no one will listen to my poetry. Six months of starving and spending. Now are all my money and all my hope run out. And yet you mock me.”

The maiden shakes her head. “We do not mock, but promise.”

“Only do as we wish,” the matron says. “And fame and ever-living poetry shall be your reward. For we command that part of the human mind that, dreaming, imagines itself awake and in that same place does poetry reside.”

“The kingdom of elves is in turmoil and the disarray of that sphere threatens ours. Sylvanus, who should be the Hunter’s slave, plots to rebel against his master, who, like us, is an ancient and powerful invention of humanity, an element and avatar of all that’s justice in males,” the matron says.

“Sylvanus, who was king of elves, and for his foul deeds was enslaved to the Hunter, the justiciar, the provider,” the crone says.

“Sylvanus will destroy us and thus remove both the male and female pillars that hold up the world as human minds have built it. Thus, like a cloak unraveled the universe shall fall, in tatters and threads with no meaning.”

“Into our place Sylvanus shall weave himself, within the mind’s warp,” the maiden says. “Like a rotted patch shall he sew himself upon a new cloth of dream, rendering the whole worthless.”

“Why do not you stop him yourselves?” Will asks.

The maiden shakes her head. “We can no more stop him than we can stop the tide. We spin the thread, we wind and cut. But our tools must be the human mind, the human heart. We cannot weave our own fate. We do not tie our own knot.”

“Stop Sylvanus.” The matron smiles, sharp teeth gleaming. “And the reward shall be yours, your poetry remembered, your words echoed through the ages unending.”

“Stop Sylvanus,” the crone says. “And we shall make you greatest of his kind, for words that burn and spell and bind.”

“I am dreaming,” the man says. “And in this dream, uneasy, do my fondest hopes mock me.”

He vanishes like smoke upon the stage, leaving the three women behind, spinning and cutting and measuring the eery thread that glimmers white in their laps.

The nave of St. Paul’s Cathedral, or Paul’s Walk, as it is called in Elizabethan England. People of all descriptions crowd every corner of the ample space—tailors, factors, lawyers, pickpockets, sellers of racy woodcuts, bawds, and chimney sweeps—all of them do business here, beneath the soaring arched roof and between the lofty columns. The imposing stone tombs of the nobility, the rood loft, even the baptismal font are used as money-changing counters. Dandies stroll aimlessly, displaying their fashionable clothes. An ill-dressed young man in his late twenties, with the beginnings of a receding hairline and long black curls that brush his frayed lace collar, stands by the eastern door, anxiously perusing a confusion of papers glued there, each headed “Si Quis.”

W
ill Shakespeare looked at the Si Quis notices posted on the door. There were so many that one was glued upon the other, till the whole door appeared to be made of paper.

All the jobs in London were spread before Will, like the countries of the earth before the tempting devil.

Yet Will remained unemployed, his stomach empty, his rent long overdue. Only an hour ago, Will’s landlord had awakened Will from uneasy, fitful sleep to demand payment for lodging that he’d long occupied but not paid for. Another day, and Will would have no lodging, either.

All these professions, though many, were to Will’s purpose none.

His head hurt with a thunderous headache, and clotted remains of his dreams haunted his mind.

A great poet, the creatures had said Will would be.

Will. A great poet.

A middle-aged man, with fading looks, a provincial grammar-school education, and next to no friends in London, Will felt as though his fortune were as out at heel as his suit and his frayed lace cuffs.

No one wanted a would-be poet. No one was looking for an aspiring playwright. No one craved to hire even someone with Will’s other, meager abilities: a petty schoolteacher, or a glover with little more than apprentice skill.

“Sweep chimney sweep, mistress,” a man’s baritone boomed just behind Will, deafening him. “With a hey derry from the top to the bottom.”

A chimney sweep advertising his services.

The smell of roasting meat, seasoned with nutmeg and ginger, drifted up to Will’s nose, tantalizing his stomach with savors of a supper he couldn’t afford.

“Well met, Richard, well met,” a man said to Will’s left, hurrying forward to clasp another man in his arms. “Would you take ale with me? And sup?”

Will dearly wished someone would invite him to sup. But in his six months in London, he’d formed near to no acquaintance and been befriended by none. He’d been cozened and fooled and stolen from. He’d been duped and mocked and betrayed, but he’d formed no useful connection, no gentle friendship that might ease his penury.

The little money he’d brought to London with him—scraped together from his father’s failing business and his wife’s selling of homegrown vegetables—had fallen drop by drop into an empty barrel of despair from which the sweet wine of hope had long since evaporated.

Now he had nothing. Not money enough to buy supper, not even enough to return home.

Nothing was left to him but to walk to Stratford, which would take days. Will would starve long before that.

Tears prickled behind Will’s eyelids. How confident Will’s wife had been, his Nan, when she’d pressed the few coins of their meager savings into Will’s sweaty hand before he left home.

She’d kissed Will and told him that with his words and his wit he could pry London open like a treasure coffer, and make his fortune and the fortune of his whole family.

Oh, deceived wife. Oh, poor, way-led woman who—despite having lived with Will for ten years and borne him two daughters and a son—still believed her man to be a Hyperion, a sage, the form and glass of all mankind.

Poor Nan, who would never even know that her husband had starved in London, dead of his own folly and inflated pride.

“Help, help,” an old man screamed to Will’s right. “Someone has cut my purse. Help. Cozenage and damnation.”

Behind Will men swarmed and pushed around the Si Quis door. Some were dressed as poorly as he, others arrayed in fine silks and velvets. All, by Will’s side and pressing, shoulder on shoulder against him, read the notices on the door with the kind of hunger for employment that bespeaks the specter of starvation nearby. Each made a little triumphant noise or read the words aloud when he found a likely position and then tore off the sheet and sauntered away.

A man in a sky blue doublet, three finger-widths of creamy lace peeking from beneath his sleeves to shroud his hands, put a well-tended finger on the paper asking for a fencing master, and pushed Will out of the way to tear the sheet off the door.

It was no use, Will thought, jostled and pushed, feeling lost and hopeless. He would go back to his lodgings and dream for his supper while he starved.

A Kinky Marriage Contract by Lotte, Neela
Fire and Ice by Susan Page Davis
Nothing but Meat: A dark, heart-stopping British crime thriller by Kendrew, Adrian
The Little Bookshop On the Seine by Rebecca Raisin
Lunar Descent by Allen Steele
By The Sea, Book One: Tess by Stockenberg, Antoinette
A Heart Made New by Kelly Irvin
Available [Marked 3] (Siren Publishing Everlasting Classic ManLove) by Jana Downs
The Black Widow by John J. McLaglen
The Blood Witch (The Blood Reign Chronicles Book 1) by Nielsen, D. S.
Our partner