Read All Rivers Run to the Sea: Memoirs Online

All Rivers Run to the Sea: Memoirs 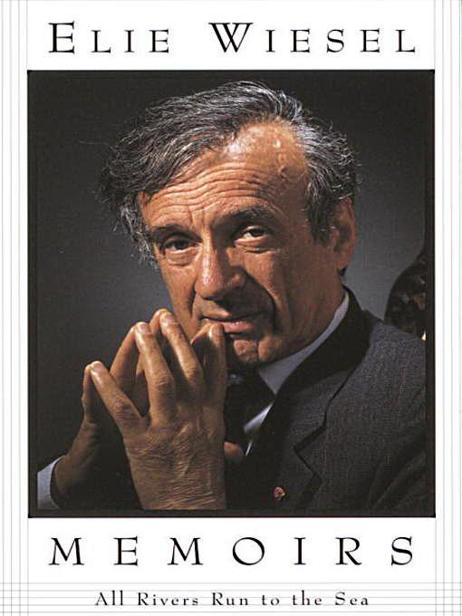 “Immensely moving [and] unforgettable, [with] the searing intensity of his novels and autobiographical tales.… Will make you cry, yet somehow leaves you renewed, with a cautious hope for humanity’s future.”

“Wiesel remains unequaled at bringing home the experience of horrific, nullifying disorientation that was the first step in the program of genocide known as the Final Solution.”

“Part of the delight of
All Rivers
lies in witnessing the gradual transformation of the brokenhearted, orphaned young boy into the spirited journalist who longs to embrace the world at large, and who, in time, does.”

“For all those who have never known Elie Wiesel, these memoirs are an introduction to the man, and for many who have met him, there will be discoveries and realizations.”

Night
Dawn
The Accident
The Town Beyond the Wall
The Gates of the Forest
The Jews of Silence
Legends of Our Time
A Beggar in Jerusalem
One Generation After
Souls on Fire
The Oath
Ani Maamin
(cantata)
Zalmen, or The Madness of God
(play)
Messengers of God
A Jew Today
Four Hasidic Masters
The Trial of God
(play)
The Testament
Five Biblical Portraits
Somewhere a Master
The Golem
(illustrated by Mark Podwal)
The Fifth Son
Against Silence
(edited by Irving Abrahamson)
Twilight
The Six Days of Destruction
(with Albert Friedlander)
A Journey into Faith
(conversations with John Cardinal O’Connor)
From the Kingdom of Memory
Sages and Dreamers
The Forgotten
A Passover Haggadah
(illustrated by Mark Podwal)
All Rivers Run to the Sea
And the Sea Is Never Full

W
hat profit hath a man of all his labor which he taketh under the sun? One generation passeth away, and another generation cometh, but the earth abideth forever. The sun also riseth, and the sun goeth down, and hasteth to his place where he arose. The wind goeth toward the south, and turneth about unto the north, it whirleth about continually, and the wind returneth again according to his circuits. All rivers run to the sea, yet the sea is not full, unto the place from whence the rivers come, thither they return again. All things are full of labor, man cannot utter it: the eye is not satisfied with seeing, nor the ear filled with hearing
.

For almost thirty years, Marion Wiesel has been the first to read and edit the English versions of my books (when not translating them herself), including this volume of memoirs
.

I owe her more than gratitude
.

L
AST NIGHT
I saw my father in a dream. His unshaven face was the same as ever, its expression frozen, but his clothing changed from moment to moment—from his Shabbat suit to the striped rags of the damned and back again. Where had he come from? From what landscape had he escaped? Who sent him? I can’t recall if I asked. All I remember is how sad he looked, and how resigned. I could see by the way his lips were moving that he wanted to tell me something, but no sound came. Then all at once, in my sleep—or was it in his?
—
I suddenly doubted my own senses. Was this really my father? I was no longer sure
.

In dreams all certainties are blurred and dimmed. Dawn and dusk, reality and fantasy, merge. And yet it
was
my father who appeared to me last night. Bearing a message? Or was it a warning? I awoke drenched with sweat, my heart pounding. A terrifying idea crossed my mind: that he had come for me
.

I never really knew my father. It hurts to admit that, but it would hurt him even more if I deluded myself. The truth is I knew little of the man I loved most in the world, the man whose merest glance could stir me. What was the secret of his inner life? What was he thinking as he stared in silence at some far-off, invisible point in space? Why did he conceal his cares and disappointments from me? Because I was too young, or because he thought me incapable (or worse) of comprehending them?

I wonder whether other sons face this same problem. Do they know their fathers as someone other than the authoritarian, omniscient figure who leaves in the morning and returns in the evening, bringing bread and wine to the table?

As a child and adolescent I saw him rarely. Carelessly dressed, often preoccupied but always friendly, he spent the week in his little grocery store—where he enjoyed chatting with customers as much as selling them things—and at the community offices where he quietly worked to assist prisoners and refugees threatened with expulsion.

Sighet was a typical shtetl, a sanctuary for Jews, in this case since 1640, when, according to historians, refugees began arriving from Ukraine, fleeing the pogroms and persecutions of the reign of Bogdan Khmelnitski. Still, in 1690 the local populace demanded that the authorities expel all Jewish inhabitants from the region. The authorities resisted; even then there must have been men like my father to protect our community.

Shabbat (the Sabbath) was the only day I spent with him. In Sighet, Shabbat began on Friday afternoon. Shops closed well before sundown, stragglers and latecomers having been admonished by rabbinical emissaries and inspectors: “Let’s go, it’s late, time to close up! Shabbat is coming!” And woe to him who disobeyed. After the ritual bath we would walk to services, dressed for the occasion. Sometimes my father would take my hand, as though to protect me, as we passed the nearby police station or the central prison on the main square. I liked it when he did that, and I like to remember it now. I felt reassured, content. Bound to me, he belonged to me. We formed a bloc. But if a fellow worshipper joined us, my suddenly useless hand was returned to me. Did my father have any idea how much that hurt? I felt abandoned, even rejected, and after that it was never the same.

I would have loved to have had a real conversation with my father, heart to heart, to have spoken to him openly of things serious and frivolous. But no—at that age everything seems serious. I would have liked to have told him of my nighttime anguish, and of my fear of the dead who, I was sure, left their tombs at midnight to pray in the great synagogue—and heaven help the passerby who failed to heed their call to come and recite the customary blessings before the reading of the Torah. I would have told my father about my poverty-stricken friends and classmates, whose hunger made me feel guilty. I thought of myself as rich and unworthy, naïvely ascribing great virtue to poverty. Deep down, I was jealous of the poor. To paraphrase the
great Yiddish humorist Sholem Aleichem, I would have given anything for a tiny taste of misery. Yes, I would have loved to have discussed all this with my father. Sometimes I even envied Isaac, who was alone with his father when they climbed Mount Moriah. God alone could have known then that there would come a time when he and I would walk together toward a solitude and an altar of another dimension, and that, unlike in the Bible story, only the son would come back, leaving his father behind with the shadows.

I admired him, feared him, and loved him intensely. He, in turn, genuinely loved all people—the weak, the needy, even the madmen. He enjoyed listening to them as they laughed, sang, wept, and chattered with birds they alone could see. Beggars were drawn to him, and he never failed to invite them to share our Shabbat meal. “The Talmud seeks to convince us that poverty is the lot of the Jews,” one of them once said to him. “But how is that possible? Poverty is ugly; it begets ugliness.” And my father nodded as if to say. You who are poor know better than the Talmud what poverty is.

I
F ONLY
I
COULD
recapture my father’s wisdom, my mother’s serenity, my little sister’s innocent grace. If only I could recapture the rage of the resistance fighter, the suffering of the mystic dreamer, the solitude of the orphan in a sealed cattle car, the death of each and every one of them. If only I could step out of myself and merge with them
.

If only I could hold my memory open, drive it beyond the horizon, keep it alive even after my death
.

I know it isn’t possible. But what of it? In my dreams the impossible is not a Jewish concept
.