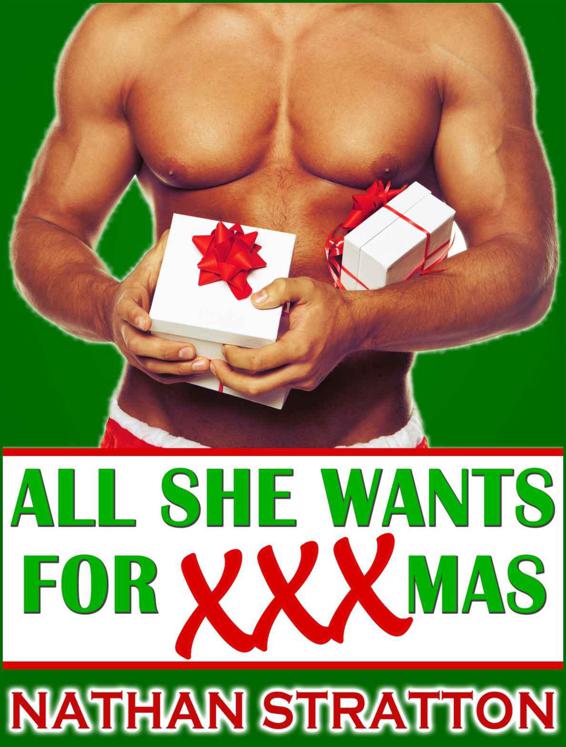 All She Wants for XXX-Mas:

Reproduction of this work prohibited unless express permission is granted by the author.

A
rt credit: Nathan Stratton,
with license from
www.depositphotos.com.

If you’ve purchased this book, please consider leaving a review after reading it.

I read all my reviews, and I take feedback very seriously.
Thank you.

Chapter 2:
Fuel for the Fire

Chapter 3:
All She Wants for Christmas

Great
, she thought to herself.
Another thing I’ll need to fix soon.
With a slight groan, she lifted her heavy purse onto her shoulder and turned towards the volunteer center.

Every December, Christie spent a month at her town’s food bank, sorting cans into bags and toys into bins. Then, on Christmas Eve, the volunteers would drive around in big vans and deliver all the toys to kids in the neighborhood. Christie loved volunteering. It was such a perfect Christmas tradition, and it always put her in the holiday spirit. Volunteering was usually the one thing that could cheer her up in the lonely winter months – but this December, even that wasn’t enough.

She’d been having a rough time of it lately, rougher than she’d like to admit. In the summer, she’d lost her job as a paralegal at a big firm downtown. Though her company had claimed it was just another round of layoffs, she knew – or at least she suspected – it was because she’d rejected her boss’s flirtatious advances at a company retreat.

“I have a boyfriend,” she’d said
, and it was true
at the time.
She’d been living with a guy, an artist named Steve, and she’d thought things were going great.
But just two months after the layoff,
Steve had
ditched her for some 21-year-old floozy he’d met at a bar. Christie couldn’t understand why he’d done it, and it took a few months for her to get over him. N
ow she understood, of course: Steve
was an asshole, plain and simple. She was better off without him, she knew that much.

But still, it was shaping up to be another lonely Christmas.

Christie walked in through the door of the volunteer center, and a little bell rang above her head. “Hello!” she called out, to no one in particular, and threw her bag down on the table. “…Anyone here?”

Dead quiet. The place was empty – not surprising, considering how few volunteers they had this year. As her co-worker Alice liked to say, “there’
s too many
who need it, and not enough to give it out.” Christie had always chalked up this remark to just being more of Alice’s dark humor. But after the rough year she’d had, Christie knew exactly what Alice was talking about.

Just then, she heard a voice
coming from
the back room
, out by the loading dock
. Not just any voice, either. Even through the heavy walls, she could tell that sexy baritone
from a mile away
.

It was Michael, the director of the
volunteer center
.

Christie’s heart skipped
a beat
, in spite of herself. Even though Michael was a good ten years older than her, and even though he
was
technically her boss, Christie just couldn’t resist harboring a slight crush on him – okay, maybe a bigger-than-slight crush.

She couldn’t help it. They’d been working at the center together for years, and Michael never failed to make Christie laugh. He’d been there for her when she lost her job, and again when her jerk of an ex-boyfriend broke her heart. Michael
was
nothing like Steve. He was
so kind,
so selfless,
so…
honorable
. And it didn’t hurt that all those years lifting heavy Christmas boxes had given him the body of a god.

In all the previous Christmas seasons, things had never seemed anything but platonic between Michael and Christie. But this year, something was different. Christie had only been back for a few days, but already she was noticing a charge in the air that hadn’t been there before.

Like the time she and Michael were going over reports together, and his hand accidentally brushed over hers. She’d found it hard to focus on the reports for ten minutes after that. Or the time she’d stumbled while stepping through the doorway, and Michael caught her arm. She’d had butterflies the rest of the day.

Small things like that kept happening – innocent stuff, really, easily written off – and the cumulative effect it was having on Christie was impossible to ignore. Every day, for her, was now a rollercoaster of emotions. It was like waking up to something you’ve known all along: once she noticed her feelings for Michael, she couldn’t push them back out of her mind, no matter how hard she tried. She just didn’t know whether or not Michael felt the same way.

And after almost a week of this delicious, uncertain turmoil, Christie knew things were going to boil over pretty soon, one way or another.

So it was understandable, then, that Christie found herself sneaking a once-over in the office mirror before heading out to the back room, just to make sure her hair was in place and her makeup looked okay. She was thirty-one years old, but she felt like a high-schooler in his presence.
It’s just Michael
, she scolded herself, as she pushed an errant curl of hair back behind her ear.
There’s no need to preen!

She could hear laughter behind the door. Michael was probably joking around with Rick, the office clown.
Oh, just get out there already,
Christie’s inner voice demanded. Taking a deep breath, she squared her shoulders and pushed the door open.

“Hey, Christie!” said Michael, turning to face her as she walked in. He looked gorgeous this morning, wearing dark jeans and an olive green V-neck that perfectly accentuated his broad frame. “How’s it going, babe?” he asked.

Christie smiled, inwardly relishing the word “babe” and the fact that he’d visibly brightened when he saw her. She hoped she wasn’t blushing. “Hi, guys!” she said cheerfully, and walked over to the table where they were sitting. “How’s business?”

“Spectacular,” said Michael, rolling his eyes playfully. “As you can see, we’re hard at work here.” He was sitting on the tabletop, his legs swung casually over the edge, eating a bagel. He was the picture of nonchalance. Rick was holding a clipboard and smiling from ear to ear, as if he’d just been caught telling a dirty joke.

“You seem like
you’re
in a good mood,” said Christie, turning to Rick. “Did you get lucky last night or something?”

Rick burst out laughing. “I wish,” he said. He shot an amused look at Michael. “Michael and I were just talking about that, actually.”

Christie stopped short, a stricken look on her face.
What could that mean?
she wondered to herself.
Has Michael met someone?
Trying to look unconcerned, she turned to Michael and asked him as much. “Oh, yeah?” she said, with measured indifference. “Someone new in the picture, Michael?”

Michael looked at Christie steadily. “Sort of,” he said slowly, watching Christie’s expression and observing the effect of each word as he spoke. “There’s someone I’m interested in, but I’m not sure if they feel the same way as I do.”

Christie plastered a false, cheery smile on her face, while inwardly her mind started racing. He had to be talking about her, right? Or was she imagining the whole thing? She realized the men were waiting for her to say something. She swallowed hard, trying to find her voice.

He smiled back at her, his eyes full of meaning. “She’ll know when she sees it,” he said.

They looked at each other for a long second, each trying to read the other’s face. Christie felt lightheaded, like all the air had been sucked out of the room. Her mouth opened, about to speak. Michael’s eyes widened in anticipation.

Suddenly, Rick interjected, ruining the moment. “Attaboy, Michael!” he guffawed, slapping Michael on the back. “Put some candy in
her
stocking, if you know what I mean!” He cackled with glee.

Michael stood up abruptly. He looked annoyed all of a sudden. “All right, Rick,” he said, “That’s enough out of you. Why don’t you get back to work already?” He tried to make it sound like a joke, but Christie detected a definite hint of awkwardness in his normally confident voice.
What’s that all about?
she wondered.

“Fine, fine,” said Rick, putting up his hands in mock surrender. “I’ve got some toys to sort, anyway. And a Merry Christmas to
you
, Michael.” He sauntered off, whistling the first few bars of “Rudolph the Red-Nosed Reindeer.”

Michael turned to Christie. He seemed to be searching for something to say. “Christie, I– ”

Christie stopped him before he could speak. “It’s all right, Michael,” she said, putting her hand in front of her, as if to push away his words before they came out. “Whatever that was about, you don’t have to explain it. Anyway, we’ve got a lot of work to do today – we’d better get started!”

She turned as if to go, but Michael caught her hand. His touch was an electric shock. She looked into his eyes. He seemed as surprised by his actions as she was. Suddenly, irrationally, she was gripped by a fear that Michael could read her thoughts.

The Missing Person by Doris Grumbach
Banner O'Brien by Linda Lael Miller
Falling In by Avery Stark
Gentle Murderer by Dorothy Salisbury Davis
Baptist DISTINCTIVE: An Adam Mykonos Mystery (The Adam Myknonos Mystries) by Gillen, Thomas
All We See or Seem by Leah Sanders
The Thompson Gunner by Nick Earls
The Mask of Apollo by Mary Renault
Death Comes First by Hilary Bonner
Full Speed by Janet Evanovich
Our partner