Read All Together Now: A Zombie Story Online

All Together Now: A Zombie Story 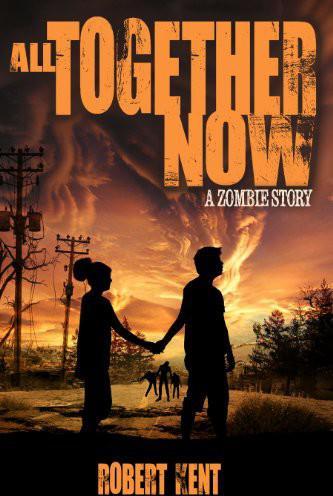 This YOUNG ADULT novel is mean and nasty and intended for a mature audience. It is absolutely not appropriate for younger readers.

In no way is this warning an apology. I believe a horror story should aim to shock and disturb. But since much of my writing is targeted at younger readers and I run the blog
Middle Grade Ninja
, I feel it's only fair to warn parents and sensitive readers up front:

In the pages that follow is a gruesome, repugnant tale featuring horrific acts of violence sure to warp young minds.

Esteemed Reader, if that sounds like as much fun to you as it does to me, we'll get along fine.

All Together Now: A Zombie Story
is by turns disgusting, terrifying, funny, and heartbreaking. Fans of
The Walking Dead
will eat it up like, well, zombies munching fresh brains. A stellar debut from a novelist to watch!

Robert Kent's
All Together Now: A Zombie Story
explodes with action, near escapes, flying guts (and other body parts), and bad luck for the main characters followed by even worse luck. In other words, a perfect zombie book. But the heart of this story is its realistic characters. I found myself staying up late over several nights, unable to put Ricky's tale down.

When I say I found this book horrifying, I mean that in a good way. I mean it in the best way there is. There were moments in this book that completely spun me out. I read the disclaimer, but I wasn’t expecting it to be as intense as it was.

All Together Now: A Zombie Story
is a book that  is fast-paced, well-written and thought-provoking while still filling its pages with plenty of action, suspense, and, of course, zombie carnage. If you like zombie action combined with dark humor and a twinge of romance than
All Together Now
is definitely for you.

This story is seriously fun, really easy to read, and the characters are easy to cheer for. And there are some fabulous one liners in this, seriously... for a zombie book, I think I laughed much more than I cringed! Well, maybe a bit, maybe not more.

I was absolutely glued to my kindle till the early hours. The short chapters make it easy to read for those who just want to pick it up and put it down, but I bet you can't stop once you start. Every chapter is action-packed, fast-paced and full of suspense, but still maintaining believability even from a 15-year-old's perspective. The action is heart-pounding, gripping, and in some places I actually found myself holding my breath while I speedily read through the pages to find out what was going to happen next... and... breathe.

I found no faults with this book, it flows well, is edited well and it is wickedly smart. There are also some very good moral lessons which gives us a very good reason to share this book with the young adults in our lives. It is guaranteed to warp their young minds, and hey, isn’t that how we all started to love the genre? I really cared for Ricky and Michelle, I loved the originality of the story and it was never predictable. In my opinion that deserves 5 stars. Whether you love zombies or not, I think you will really enjoy
All Together Now: A Zombie Story
!

Kent doesn't pull any punches. This is a violent story, that not only shows the zombie carnage, but also how humans can be just as nasty and dangerous as zombies, if not more so.

—
Pearls Cast Before A McPig

This one is a HUGE hit. Kent's writing style flows naturally. He reads like someone who was born to tell a story, and I for one, felt like I want to keep reading his stories... I really cared about the characters in this book. A lot.

—
Where Zombies Come To Read

ALL TOGETHER NOW (TRADITIONAL)

Once I was all alone, mired in sin

My wicked self had usurped His word

When I felt most afraid, the Shepherd called

Yea though we perish

Yea though we die

We'll all be together in the sweet by and by

For there's no greater pain in heaven or hell

Hurts worse than being on my own

But after we've died, left our mortal coil behind

We'll rise up and not be alone

Yea though we perish

Yea though we die

We'll all be together in the sweet by and by

I'M NOT A BAD WRITER, but I'm amazing with a baseball bat, which is why I'm still alive to write this.

I get mostly A's in English, or at least I did before the school burned down. Two summers ago my short story "Raccoon Avenger" was published in the Harrington Herald.

I just wanted you to know this story isn't going to suck.

I'm not exactly writing it under ideal circumstances. We don't dare turn on a flashlight. I'm writing this by moonlight on the floor so they won't see me through the windows.

I'm just going to write what I know. After all, someone should be writing this down, and for all I know the world's great writers are all dead, or worse. So you're stuck with me.

At least this will be a short book. There are only 300 pages in this journal and there's a good chance I won't live long enough to fill them all. So if this story should just stop somewhere in the middle, you'll know I didn't make it.

Or maybe I lost this journal. Let's hope it's that.

I can hear them as I write this, shuffling around outside, moaning in that low way they all do. I only really pay attention when the moans get close.

When they get close, their moan becomes a growling snarl that's one of the last sounds you'll ever hear.

They look harmless, confused. They stumble and stagger like drunks. They're so slow, you might think you could walk by them, but that'd be a mistake.

Get too close, they'll rip your chest open, and you'll die hearing their snarling and your own screaming and the splash of your insides against the tops of your shoes.

Hopefully, you don't know what I'm talking about.

Hopefully, as you're reading this, it's all over and the world is a nice place again with baseball and picnics and apple pie.

Hopefully, you've only read about zombies in books, and much better books than this one.

But probably not. Probably there is no you.

Or maybe you're a different species that evolved after human beings finally got wiped out and you're curious to see what we were like.

Or maybe you're an alien, moving in now that the world is vacant—I mean, even the dead can't live forever, can they?

If you are an alien or a new species, you don't even know what baseball or apple pie are and you should read about them instead of zombies.

I don't even know if that's the right word for them. Zombies is what they were calling them on the news back when the power was on and the broadcasts were still running.

Zombie is as good a name as any and it's what Michelle, Levi, Chuck, and I call them.

Before the news crapped out, they said there were zombies in Europe and China and even Japan.

If the human race is extinct, who's going to read this journal?

This is stupid. I'm not writing this.

I CHANGED MY MIND. I wasn't going to write this, but there's nothing else to do except hide. I can't sleep or go outside.

Levi's stopped talking to himself, which is good. He was freaking Michelle and me out.

Now he sits quietly in the corner of the store, his arms wrapped around his legs, knees curled to his chest. Sometimes he rocks, but mostly he just stares straight ahead like he's seeing something Michelle and I can't.

Michelle's not sleeping, either. She hasn't moved for a while, but I crawled by her and saw her eyes were open. That's easy to spot on a black girl. The whites of her eyes stand out perfectly against the darkness of the room and her skin.

Levi's white, by the way, and so am I, and so is my little brother Chuck. Just in case you were wondering.

This story is kind of going to be about me—I mean I can only really tell you the stuff I saw, right? So I guess I should tell you about myself.

Chuck and I have lived all our lives in Harrington, Indiana, which is a little town 37 miles north of Indianapolis, not too far from Brownsborough. I was born here and if the things groaning outside have their way, I'll die here.

If you know anything about what happened, you know about Harrington. After all, Harrington's the birthplace of Kirkman Soda, which is where we're going.

That's where the cure is.

That's where Chuck needs us to go.

I don't go by Richard, by the way. I can't stand that name and I don't want you to think you're reading a book by some jerk named Richard, or worse, Dick.

I go by Ricky.

The girl I'm traveling with, Michelle Kirkman, is the daughter of Gerald Kirkman, who

I DIDN'T DIE. JUST IN case you were concerned because I stopped writing so suddenly.

Dead fingers tapped the window beside the double doors, one finger striking the glass at a time like an impatient person waiting.

It broke my concentration.

After a few moments, the zombie moved on, but I'd totally forgotten what I was going to write.

So let's start over:

Michelle, Levi, Chuck, and I got back to Harrington this afternoon. It took us four hours to get here from Brownsborough—a trip that used to take 25 minutes by car.

We walked in the fields that run parallel to I-65. We only saw three zombies during the whole walk, aside from Chuck, of course.

The first two weren't a problem.

In our first hour of walking, we came across a green truck lying on its roof, its wheels in the air like the stiff limbs of a carcass.

It was in the center of a field, but we could tell from the thick tracks leading up to the wreckage that the truck had come from the highway.

A side mirror lay in the grass several feet away and I had an idea the truck had flipped over at least twice, breaking off its mirror before rolling to a stop on its back.

Levi wanted to walk around the wreck and I thought that was smart, but Michelle marched straight to it. "They could've packed food or weapons," she called over her shoulder.

That was a fair point.

I hurried to catch up, but I stopped when Michelle brought our only gun out of her jeans and pointed it through the truck's windshield.

She knew not to fire it. A gun's good for getting out of a tight spot, but the shot will draw the attention of every zombie in hearing distance.

I had my bat up, ready to swing before I knew what the danger was.

Then I heard the muffled thumping. There were two corpses pounding on the windshield from inside the truck.

Joy School by Elizabeth Berg
Fall from Grace by L. R. Wright
Dead Ringer by Ken Douglas
Unleashed: The Deepest Fears Lie Within (Secrets of the Makai) by Kerr, Toni
Undead and Unappreciated by Maryjanice Davidson
Grave Consequences by Dana Cameron
The Fine Line of Revenge by Martin Cox
The Agathon: Reign of Arturo by Colin Weldon
Lifted by the Great Nothing: A Novel by Karim Dimechkie
King Con by Stephen J. Cannell
Our partner