Read "All You Zombies-" Online 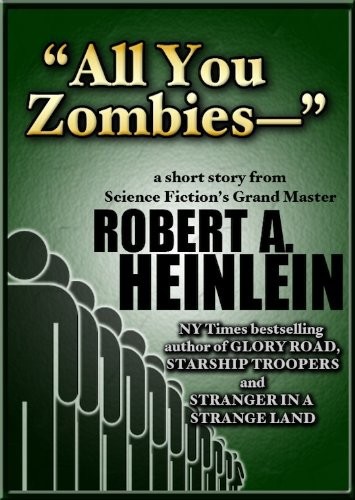 by  Robert A. Heinlein.

The Unmarried Mother was a man twenty-five years old, no taller than I am, childish features and a touchy temper. I didn't like his looks - I never had - but he was a lad I was here to recruit, he was my boy. I gave him my best barkeep's smile.

Maybe I'm too critical. He wasn't swish; his nickname came from what he always said when some nosy type asked him his line: "I'm an unmarried mother. -- If he felt less than murderous he would add: "at four cents a word. I write confession stories. --

If he felt nasty, he would wait for somebody to make something of it. He had a lethal style of infighting, like a female cop - reason I wanted him. Not the only one.

He had a load on, and his face showed that he despised people more than usual. Silently I poured a double shot of Old Underwear and left the bottle. He drank it, poured another.

His fingers tightened on the glass and he seemed about to throw it at me; I felt for the sap under the bar. In temporal manipulation you try to figure everything, but there are so many factors that you never take needless risks.

I saw him relax that tiny amount they teach you to watch for in the Bureau's training school. -- Sorry, " I said. -- Just asking, "How's business? " Make it "How's the weather? --

I poured myself one, leaned toward him. -- Matter of fact, " I said, "you write a nice stick - I've sampled a few. You have an amazingly sure touch with the woman's angle. --

He barely glanced at it. -- if you're really a bastard, you know how it feels. When I was a little girl-"

"Wups! " I said. -- Did I hear you correctly? --    "'Who's telling this story? When I was a little girl-Look, ever hear of Christine Jorgenson? Or Roberta Cowell? --    "Uh, sex-change cases? You're trying to tell me-"    "Don't interrupt or swelp me, I won't talk. I was a foundling, left at an orphanage in Cleveland in 1945 when I was a month old. When I was a little girl, I envied kids with parents. Then, when I learned about sex-and, believe me, Pop, you learn fast in an orphanage-"    "I know "    "-I made a solemn vow that any kid of mine would have both a pop and a mom. It kept me "pure, " quite a feat in that vicinity - I had to learn to fight to manage it. Then I got older and realized I stood darn little chance of getting married - for the same reason I hadn't been adopted --. He scowled. I was horse-faced and buck-toothed, flat-chested and straight-haired.     "You don't look any worse than I do. --    "Who cares how a barkeep looks? Or a writer? But peaple wanting to adopt pick little blue-eyed golden-haired moron. Later on, the boys want bulging breasts, a cute face, and an Oh-you-wonderful-male  manner. -- He shrugged. I couldn't compete. So I decided to join the W. E. N. C. H. E. S. --    Eh? --    "Women's Emergency National Corps,  Hospitality  & Entertainment  Section,  what  they  now  call  "Space Angels'-Auxiliary Nursing Group, Extraterrestrial Legions. --    I knew both terms, once I had them chronized. We use still a third name, it's that elite military service corps: Women's Hospitality Order Refortifying & Encouraging Spacemen. Vocabulary shift is the worst hurdle in time-jumps - did you know that "service station" once fractions? Once on  an assignment in the Churchill Era, a woman said to me, "Meet me at the service station next door -- - which is not what it sounds; a service station" (then) wouldn't have a bed in it.

He went on: "It was when they first admitted you can't send men into space for months and years and not relieve the tension. You remember how the wowsers screamed? - that improved my chance, since volunteers were scarce. A gal had to be respectable, preferably virgin (they liked to train them from scratch), above average mentally, and stable emotionally. But most volunteers were old hookers, or neurotics who would crack up ten days off Earth. So I didn't need looks; if they accepted me, they would fix my buck teeth, put a wave in my hair, teach me to walk and dance and how to listen to a man pleasingly, and everything else - plus training for the prime duties. They would even use plastic surgery if it would help - nothing too good for our Boys.    "Best yet, they made sure you didn't get pregnant during your enlistment - and you were almost certain to marry at the end of your hitch. Same way today, A. N. G. E. L. S. marry spacers - they talk the language.    "When I was eighteen I was placed as a `mother's helper'. This family simply wanted a cheap servant, but I didn't mind as I couldn't enlist till I was twenty-one. I did housework and went to night school - pretending to continue my high school typing and shorthand but going to a charm class instead, to better my chances for enlistment.    "Then I met this city slicker with his hundred-dollar bills. -- He scowled. The no-good actually did have a wad of hundred-dollar bills. He showed me one night, told me to help myself.    "But I didn't. I liked him. He was the first man I ever met who was nice to me without trying games with me. I quit night school to see him oftener. It was the happiest time of my life.    "Then one night in the park the games began. --    He stopped. I said, "And then? --    "And then nothing! I never saw him again. He walked me home and told me he loved me-and kissed me good-night and never came back. -- He looked grim. -- If I could find him, I'd kill him! "    "Well, " I sympathized, "I know how you feel. But killing him-just for doing what comes naturally - hmm... Did you struggle? --    "Huh? What's that got to do with it? --    "Quite a bit. Maybe he deserves a couple of broken arms for running out on you, but-"    "He deserves worse than that! Wait till you hear. Somehow I kept anyone from suspecting and decided it was all for the best. I hadn't really loved him and probably would never love anybody-and I was more eager to join the WE. N. C. H. E. S. than ever. I wasn't disqualified, they didn't insist on virgins. I cheered up.    "It wasn't until my skirts got tight that I realized. --    "Pregnant? --    "He had me higher "n a kite! Those skinflints I lived with ignored it as long as I could work-then kicked me out, and the orphanage wouldn't take me back. I landed in a charity ward surrounded by other big bellies and trotted bedpans until my time came.    "One night I found myself on an operating table, with a nurse saying, "Relax. Now breathe deeply. "    "I woke up in bed, numb from the chest down. My surgeon came in. "How do you feel? " he says cheerfully.    "Like a mummy. --    "Naturally. You're wrapped like one and full of dope to keep you numb. You'll get well-but a Cesarean isn't a hangnail. "    Cesarean" I said. "Doc - did I lose the baby? "    Oh, no. Your baby's fine. "    Oh. Boy or girl? "    "'A healthy little girt. Five pounds, three ounces. "    "I relaxed. It's something, to have made a baby. I told myself I would go somewhere and tack "Mrs. " on my name and let the kid think her papa was dead -no orphanage for my kid!     "But the surgeon was talking. "Tell me, uh-" He avoided my name. "did you ever think your glandular setup was odd? "    "I said, "Huh? Of course not. What are you driving at? "    "He hesitated. I'll give you this in one dose, then a hypo to let you sleep off your jitters. You'll have "em. "    "'Why? I demanded.    Ever hear of that Scottish physician who was female until she was thirtyfive? -then had surgery and became legally and medically a man? Got married. All okay. "