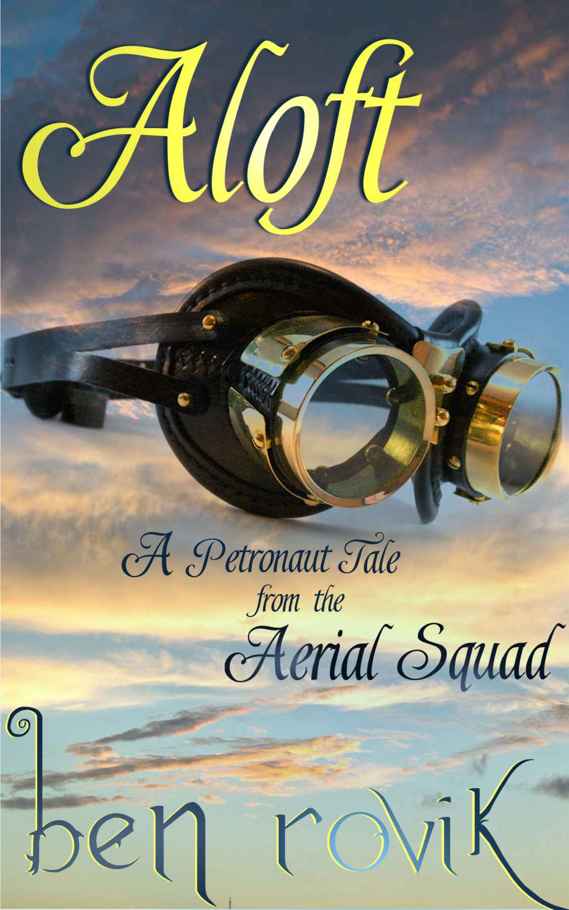 A Petronaut Tale From The Aerial Squad

This ebook is licensed for your personal enjoyment only.

If you enjoy it, please spread the word to anyone you like!  Multi-chapter samples of each of my books are available for free at
benrovik.wordpress.com
.  Consider directing your friends or family there first, rather than emailing or sharing this copy around.  Thanks!

Find his work on
Etsy
and
DeviantArt

Sample from The Wizard That Wasn’t: Book One of Mechanized Wizardry 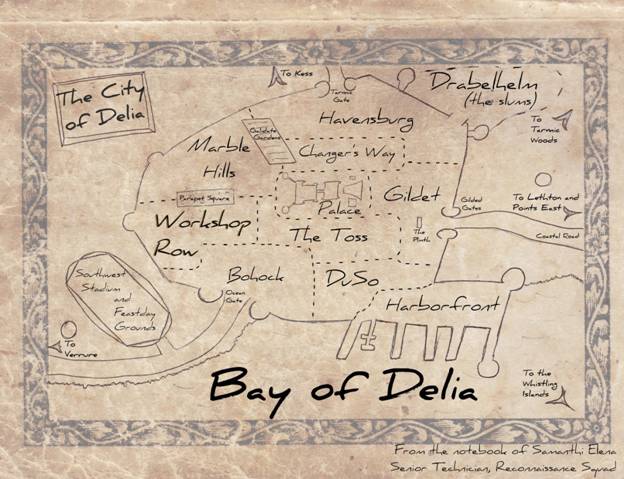 “In Delia, a city of one million, fewer than two hundred make up the community of Petronauts.

Teams of apprentices working their way up the ranks, yearning to prove themselves.

Inventors and adventurers all, struggling to make their mark in a world on the cusp between yesterday and tomorrow.

Over the decades, these Petronauts have organized themselves into eight squads, as they call their groupings:

The Cavaliers
, chivalric warriors and defenders of order;

The Bulwark Squad
, stoic fighters armored to protect the weak and outlast any foe;

The Reconnaissance Squad
, stealthy and light-footed partisans who undertake missions of opportunity;

The Haulers
, gruff inventors with mighty machines to lift and shift mammoth cargos to and from the city;

The Aerials
, roguish visionaries whose flying vehicles conquer the skies;

and
The Parade Squad
, unflappable showmen who represent the community of Petronauts to the people at large.

But my glib characterizations of the squads only scratch the surface, for the only constant with these Petronauts is that they are forever striving for something, and all the men and women in the community have stories that could be told of them...”

On the Petronauts of Delia
, revised 861

“…to expand the boundaries of powered and unpowered flight; not for practical considerations alone, but in furtherance of the eternal human quest to surpass ourselves, and soar where once we crawled…”

From the Charter of the Aerial Petronauts of Delia

They reached for the socket wrench at the same time.  The instant their fingertips brushed, she knew they had something special.

“Excuse me,” Ensie said, pulling her hand away.  She flicked her eyes down to the hangar floor and up to the tall man’s face.  There was a flush of color pinking up his wide, honest features.  He had dark brown eyes like a loyal dog, and she had a wildly inappropriate urge to reach up and stroke his hair.
What’s happening to me?

“What are the odds we both, uh, wanted the same…?”

Her tongue was tripping over itself—
surprise, surprise
—so she mutely indicated the tool rack, with easily four dozen hammers, saws, wrenches and drills of every size and description.

He smiled as he looked down at her, kindly, his fingers laced together and his palms resting on his soft belly.

“Civilians first,” she said, nodding at the wrench.

He gestured invitingly with one hand—one very large hand.  “After you,” he said.

Ensie bobbed her head in thanks and slipped the wrench off its hook.  “I’ll have it back in one piece for you,” she said before she could stop herself.

The bellow from across the hangar caught her off guard.
Spheres!
It was amazing how much impatience could be crammed into three little syllables.

Ensie Thalanquin spun around immediately and dashed across the Aerial squad’s hangar towards the voice of her boss, weaving through the techs and equipment that crowded the cavernous workspace.
She must be ready with the rotor already.  Who knew she could work so fast?  How long was I gone, anyway?  It was just a quick jog to the tool rack…

“Get in there,” Iggy grunted at her.

Ensie palmed a pair of 3/8ths bolts from the dusty hangar floor, avoiding the senior tech’s eyes.  Ignatia Roulande lifted the metal rotor up to the latchpoint on the Flicker with her lips pressed tightly together.  The tendons stood out in her tanned arms.  Ensie ducked under Iggy’s fists as the taller woman held the half-meter rotor steady against the Flicker’s tail. She slipped one bolt through the rotor into the latchpoint, and fed the other through a second later.

“Nuts.  Nuts...” Ensie muttered to herself, scanning the floor.

“By the puncher,” Iggy said, pointing towards the errant hardware with her chin.  “Take your time, Ensie; I can hold this all morning.”

“Sorry,” Ensie said as she scrambled for the nuts.  She slipped one on each bolt and tightened them in place with quick, practiced strokes.  As the fasteners took the weight, Iggy let go of the rotor and scratched her bicep with her gloved fingers.

“Took you a long time to get back from the rack.  Somebody hide the tools or something?” she said.  A sleepy smile had crept its way back onto the senior tech’s face, softening the teasing.

Realization struck.  Ensie tightened the second bolt with one last tug and shot a look across the hangar to the distant tool rack.  Another Aerial tech was sauntering past, and two civilian women in their work smocks were poring over a design scroll.  But the man who had needed her wrench was nowhere to be seen.
And I didn’t even get his name.

“I just got talking.”

Ensie half-smiled.  In a squad of laid-back, gregarious gadget-heads, junior tech Ensie Thalanquin was the oddball.  She kept a clean, legible daily planner; her laugh was quieter than her speaking voice; and she had a dangerous tendency to believe what people said to her, which made her the perfect target for every Aerial with a tale to spin.  Her colleagues had made a game of priming Ensie with grandiose stories and fabricated facts and trying to get her to repeat them later.  The short tech stood out physically as much as she did by temperament. Her face was full and her body tended to show its weight, while her average squadmate was wiry as a greyhound and lanky as a marionette.  She knew how to drink—which was a make-or-break prerequisite for any Aerial—but, shockingly, alcohol only made her quieter and more internal.  ‘Chatty Ensie’ was anything but.

“If we ever get this beauty off the ground, she’ll be the feastday favorite,” Iggy went on, rapping her knuckle against the Flicker’s wing.  Their flying machine was only half-constructed, with the seat in the middle for a pilot and one curved pole extending behind the chassis at a thirty degree angle. Ultimately, they would build add a second pole on the far side, equip each one with a propeller, and build a ranine coil suspension and flexible skis on the bottom of the seat.  Like a grasshopper, the concept vehicle would travel in leaps, using its propellers for steering and stability rather than extra loft.  It would be a very quick way for VIPs, scouts, or messengers to traverse difficult terrain, without the same fuel and distance limitations of a thrust pack.

If the Flicker worked right, it would be exactly the sort of success story the Board of Governors wanted for their 870 Exposition.  It was the fifteen-year anniversary of the royal edict on Petronaut independence, the landmark decree empowering ‘nauts to pursue their own projects at their own pace.  855 had been the first year squads hadn’t been required to sell their services or their ingenuity to private investors and meddling nobles just to keep the gaslights lit.  The past fifteen years of autonomy and guaranteed funding had been a researcher’s dream.

But the Governors weren’t so naïve as to think that the royal support came with no strings whatsoever.  In some ways, the independent Petronauts felt even more pressure to deliver for the city at large than they had under the old patronage system.  In defending their decree to the nobles, Queen Tess and King Randolph had spoken grandly of how a free flow of ideas and an unconstrained spirit of invention were the best way to develop advances that would raise the whole city up, not just one portion of it.  Language of that sort, the ‘nauts had quickly realized, meant that they couldn’t abandon themselves to their newfound independence and ignore the public completely without embarrassing the Throne; and an embarrassed Throne would make things on Workshop Row very uncomfortable indeed.

So the annual Expos had been conceived to showcase ‘naut projects that placated the Haberstorms, and Petronaut-civilian collaborations that would make everyone gooey with happiness inside.  At least, that was the cynical Aerial outlook on the whole thing.

Ensie scrutinized the Flicker’s skis, trying to focus.  The whole exercise wasn’t so bad in her book; but then again, she honestly believed the Flicker was worth building.  The poor techs and ‘nauts who got stuck constructing pie-in-the-sky designs that were purely for show probably felt differently.

“We’re on schedule, I think,” Ensie said, looking up to Iggy.  “I think she’ll get off the ground.  I mean, do you really worry we won’t be ready by the feastday?”

“Nah.  Especially with these civilian crews wandering around looking for things to break—I mean ways to help.”  Her voice was cheerfully acidic.  “I feel like a flaming Civic having our doors open like this.”

His eyes were brown and his face was kind.

“Some of them are all right,” Ensie said, casting another look across the hangar.  Nowhere in sight.

She pushed her hair behind her ear, determinedly shoving aside her mental image of his face, and knelt down next to her senior tech.  There were more than enough things in her real life to worry about without fretting over a nameless man.

Sinful Pleasure (The Millionaires Social Club) by VonSant, Kat
Fallen: Celeste by Tiffany Aaron
Rise of the Dead Prince by Brian A. Hurd
Us by Michael Kimball
Justin Bieber by Justin Bieber
The Billionaire's Baby by Dahlia Rose
The Dragon of Avalon by T. A. Barron
Wreck Me: Steel Talons MC by Glass, Evelyn
I Remember You by Scarlett Metal
Lover's Delight by Diana Persaud
Our partner