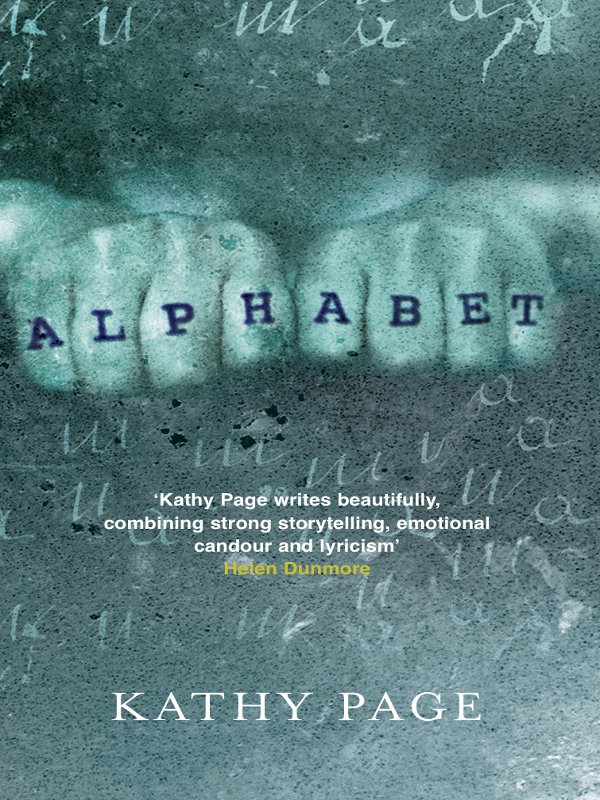 âIt is a wonderful book, peculiar, intense, revealing, challenging and above all riveting . . . I kept saying to myself, how could she know this?'

Erwin James,
Guardian
columnist and author of
A Life Inside

âSometimes novelists go too far â and sometimes they manage to demonstrate that too far is the place they needed to go . . . a book which lets us see the humanity and vulnerability that accompany monstrous acts' Roz Caveny,
Time Out

âPage throws hope into a mixed-up world where only fantasies and delusions dare to grow' Susan Musgrave,
Globe and Mail

âPage has . . . been courageous in making a sympathetic character of a man who has abused and killed a woman. She knows him in his full complexity, and that self-knowledge has risks, but also brings hope' Kath Murphy,
Scotland on Sunday

âPage captures the oppressiveness of the closed institution, the violence that always seethes beneath the surface . . . The inmates . . . are individually well-drawn and collectively they help to make the story compelling . . . Page lifts the novel out of its didactic casing, through the subtlety of her treatment of the literacy theme' Sarah Curtis,
Times Literary Supplement

The Story of My Face
â
The Story of My Face
is a marvellously well-crafted book, subtle and measured yet with the powerful, disconcerting tug of deep and dangerous water. I can't remember the last time I was so compelled, impressed and unsettled by the emotional world of a novel, as I was by this one' Sarah Waters

âPage's descriptions of the cold and silent Finnish landscape are incredibly evocative and haunting. You can almost smell the snow melting as Natalie examines every detail of one life in a bid to understand her own . . .
The Story of My Face
is quietly gripping. It keeps you reading, wanting to uncover both Natalie's past and that of Thomas Envall' Clare Heal,
Sunday Express

âThe novel has a tightly written, wonderful structure . . . Page has a talent for vivid invention and detail, and rarely rings a false note . . . it's a world that envelops you, taking you on a compelling and unpredictable journey'

âAn elegantly compelling story of how a young girl's obsession forever changes the lives of those around her . . . a disciplined exploration of the complexity of human motivation and our need for redemption' Lynne Van Luven,
Vancouver Sun

â. . . a most impressive achievement'

Kathy Page was born in London but is currently living on the west coast of Canada with her husband and two young children. Her fifth novel, The Story of My Face, was long-listed for the Orange Prize in 2002. She has worked as a writer in residence at a variety of universities and in other settings, including a Norfolk fishing village and, in 1992, a men's prison in the UK. Her website can be visited at
www.KathyPage.info
.

All rights reserved. The use of any part of this publication reproduced, transmitted in any form or by any means, electronic, mechanical, photocopying, recording or otherwise stored in a retrieval system, without the express written consent of the publisher, is an infringement of the copyright law.

First published in 2004 by Weidenfeld & Nicolson

There's no chair, even. The room is blue-grey, fluorescent-lit, like the rest.

âProperty?' the man at the counter asks. They've already taken his real clothes: Simon's standing there in a striped shirt and a pair of thin jeans that won't stay up.

âAnything that might get nicked or trashed,' the man says, âGive it here â' he's done this a thousand times, has the timing just so. âWe'll seal it up nice and tight . . . then we'll lose it for you good and proper . . . Ha! Seriously, there's no liability.' Oh, he's proud of himself, all right. His white shirt glows almost violet. The breast pocket is stretched over a pack of twenty Bensons. The top of his bald head shines in the light as he taps the side of his nose, leans forwards:

âWhat you got, then,' he says, âMummy's ashes? The bleedin' crown jewels? Spit it out, we haven't got all day.'
There are six more behind me, Simon thinks, and there's fuck knows what ahead . . . In the end, it can't matter much what happens to these two particular items of his. Except that this way he doesn't have to look after them and if they really are lost, whatever this bald bastard says, it won't be his fault. And the sooner he gets through this then the sooner he might get to lie down and he could sleep on a bed of knives in an earthquake so long as he was lying down.

He grins back at the big-headed, fat-fingered man; he keeps his thoughts to himself and puts his goods on the counter. First, the envelope. It's a small, thin envelope with just his name, Simon Austen, on the outside.

âIt's sealed,' he says.
Well
, says the slow look he gets back,
opening your sodding correspondence is the last thing on earth I'd do,
because, like you, it'll be a piece of
â

Simon's too beat-up to react. His eyes are so sticky he can hear every blink, feel it too. He had the shower after the strip search, but it was cold and he can still smell his own sweat. He stares at the counter top, dirty oak edging with Formica inset, and remembers how the envelope was given him by a washed-out social worker who first checked his birth certificate and gave him a speech about not expecting too much. Then she watched him tear it open, unfold the single sheet inside. After that, she read it to him, all two lines of it: âI am sorry. This is the way things had to be. I really hope things turn out well for you, Sharon.' That's what the woman said it amounted to.
Then she asked him would he like some time to talk about his feelings for his mother and when he said no, she said he needed counselling and gave him a list of phone numbers as long as an arm; he was so fucked off with her that he nearly binned the letter, but in the end he smoothed it out and resealed the envelope, kept it for years in the lining pocket of his pilot jacket . . . Well, as a matter of fact things turned out just about as badly as they possibly could, and this lot can lose the fucking thing if they want to, he thinks. He's moving on. In.

âIt's a Rolex,' Simon tells him. Though it's not. He got it with his first month's proper pay, from someone he met in a pub. It loses. He was ripped off. So, good riddance. He'll travel light: washing things, bedroll, plate, bowl, mug.

He does his squiggle with the pen. The joker opposite seals up his things, then pushes over an empty envelope: brown with black type, official looking.

âWell, son, you can wipe your arse with it if you want!'

âRight, mate,' Simon spits back. âMaybe I will.' His hands are fisted and he's woken right up now.

âKeep your head down,' the man says, pleased, turning
away. Simon shoves the envelope in his pocket, collects two sheets and a blanket, stuffs them in the pillowcase, moves on.

The man in front of him has a moustache, the one behind a full chin's worth of hair. He can hear the creak of both of their pairs of shoes, the rattle of their key chains, their breath, his own. They pass through the next pair of doors, solid, then barred, and the next, and the next, pausing each time to wait for the key to slip in and do its work, two openings, two closures. Nothing is said. He thinks how he could die here. Be killed. Start using drugs and do the job himself. Just get old . . . and all of a sudden, how badly he wants what he's not had, all of it, even not knowing what it is! How much he wants to throw the switch, dematerialise, reappear somewhere else or as someone else, anyone. His heart is already fighting to escape his chest when the last set of doors opens on to the wing and the stench and echo of captivity smashes into him. It's like the opening of a furnace door. A wall of heat. They have to push him through.

âGo on,' says the bearded man behind, âgo on now, son, this here is a one-way street.'

I'm no good at reading, he tells them when they ask about his needs. Because Education is under-resourced, Ted Kennet comes on the bus to help out, changing twice, week after week.

Smoke? Ted asks as he sits down the first time. Next time he brings a paper bag of assorted sweets,
sweets
for God's sake: A for aniseed, B for butterscotch, C for candy twist: it doesn't have to be apple, ball, cat. It can be anything you want and it doesn't even have to start at the beginning and march through to the end. âStart where you want!' Ted says. âYou pick. I'm trying to make it easy for you.'

They work in the back of the Education staff room, sitting under some book shelves that haven't been put up straight.
People keep coming in to get to the stationery cupboard, which has to be unlocked and locked again every time.

âRemember, you do want this, even if you sometimes think you don't,' says Ted. If he's not busy with his roll-up machine or his pencils and paper, he sits with his big square hands like dead weights on his knees. The veins in his nose and cheeks are all bust up, the wrinkles on his forehead go up as well as down, cutting it up into squares. His hair is cut short and neat, but most of it has long gone. Simon's never sat as close to someone so old before and every time Ted coughs, he can hear something bubbling in his chest. D for disgusting.

Sometimes he loses patience. A for aggro. B for bastard. C for cunt.

âG for get on with it. I don't give up easily,' Ted says.
According to him, reading is one hand (he lifts it, shows the palm, carved by lines into an elaborate hieroglyph) and writing
is the other. Without them you'd be having to open doors with your teeth and toes. âYou've got a mind,' he says. âUse it.'

Simon notes that Ted isn't well, and they don't pay him. He's impressed, though he won't fool himself that Ted's kindness is entirely personal to him because he also knows he's lost his wife and doesn't want to stay in and mope. And then again, it's clear that Ted is of the type that needs to do good. He's already put in thirty years as a UCAAT shop steward. You should have joined, he says. Might have made a difference, who knows? He believes in the two Rs, Rights and Wrongs. Illiteracy is a wrong on a par with being cut off from the electricity.

A Criminal History of Mankind by Colin Wilson
Imperfect Strangers by David Staniforth
Need You Now (1001 Dark Nights) by Lisa Renee Jones
My Sister's Voice by Carter, Mary
Red Phoenix Burning by Larry Bond
Scorned by Andrew Hess
Unremarkable (Anything But) by Zart, Lindy
The Billionaire's Bauble by Ann Montclair
Astro-Knights Island by Tracey West
You'll Think of Me by Franco, Lucia
Our partner