Read Ambush Alley: The Most Extraordinary Battle of the Iraq War Online

Ambush Alley: The Most Extraordinary Battle of the Iraq War 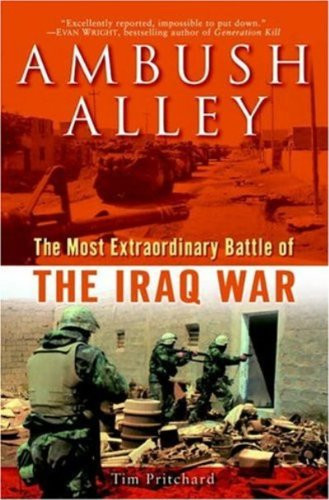 A NOTE ON SOURCES

I - THE ROAD TO NASIRIYAH

For my father,
who continues to be an inspiration

A NOTE ON SOURCES

The individual marines experienced the events of March 23, 2003, as a series of chaotic moments, which bear no relation to any normal understanding of time and place. Time seemed to stand still or speed up. Marines had little idea what was going on with the other marines at their sides, let alone with another company a couple of kilometers away.

Through interviews with some fifty marines, I have tried to piece it together to produce a detailed account of what turned out to be the most terrifying battle of the war in Iraq. My aim has been to re-create combat as the marines experienced it. The dialogue and feelings expressed by individual marines are their best recollection of what happened that day.

While this is predominantly about the thoughts and deeds of a group of U.S. marines, there is another side to the battle that can only be imagined. Because of the deteriorating security situation, few Iraqis felt able to talk openly about the events of March 23. However, I hope that my account will give some idea of the confused feelings of relief, rage, anguish, and suffering experienced by combatant and noncombatant Iraqis on the streets of Nasiriyah that day.

During the battle, many enlisted marines and some officers commonly referred to the Iraqi fighters as “hajjis.” In the Arabic world, a “hajji” is a Muslim who has made the pilgrimage to Mecca. It is both a mark of respect and a common surname. The vast majority of marines would not have been aware of the religious connotations of the name. One marine believed that the name came from a character in a TV sitcom.

My interviews with marines have been supplemented by official documents, diaries, and photographs. Many of the facts relating to the attack on the 507th Maintenance Company are taken from the U.S. Army report on the Private Jessica Lynch incident. The facts relating to the A-10 friendly fire attack are taken from the Department of Defense inquiry into the case. Newspaper articles that have helped my research include Mark Franchetti’s dispatch from Nasiriyah for
The Times
of London on March 30, 2003, and Rich Connell and Robert J. Lopez’s report of September 5, 2003, in the
Los Angeles Times.

I’d like to thank all those marines at Camp Lejeune and elsewhere who gave me so much of their valuable time, especially Chief Warrant Officer David Dunfee, Captain Scott Dyer, Captain Teresa Ovalle, and First Lieutenant James Reid. Special thanks to David Coward, David Mack, everyone at Darlow Smithson, Jean Reynaud for his helpful comments, and my family and friends for their love and support. 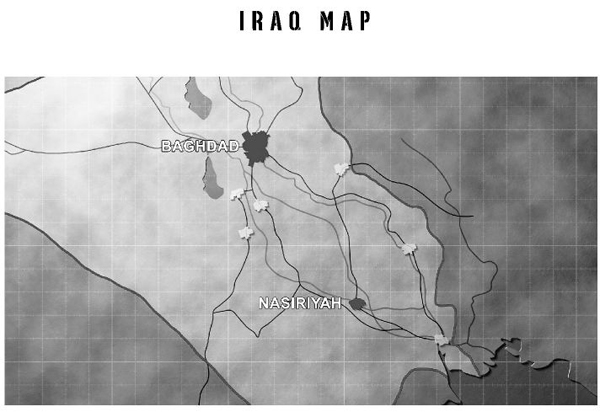 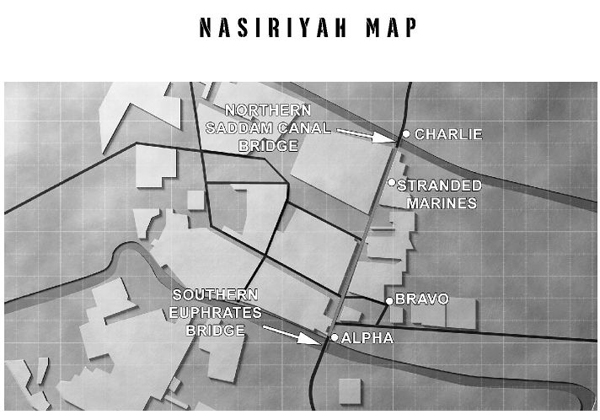 Company positions at the height of the battle.“Ambush Alley” between
the Northern Saddam Canal and Southern Euphrates bridges

On September 17, 2003, I was traveling with U.S. forces in a convoy of Humvees through the western outskirts of Baghdad, to report on the success of the military operation that had toppled Saddam Hussein. Yet talk among U.S. soldiers and marines that day was not of their achievements, but of the local population’s growing mood of resentment after the euphoria of the U.S. forces’ initial sweep into Baghdad. It was an airless, sunny afternoon as we traveled along a dirt road to our base in a former Iraqi army compound. It was eerily quiet. Suddenly, an ear-shattering explosion cracked through our vehicle and a rush of hot air and debris swept past my face. The heavily armored door of the Humvee warped inward into my legs and the vehicle lifted off the ground. There were cries of “Get down, get down.” As I dived to the floor, I looked up to see a shattered windshield and clouds of dust, reflected against the sunlight, falling slowly toward the ground. The acrid smell of explosives filled my nostrils and stuck in my throat. We had been ambushed. Hidden members of the Iraqi resistance had detonated an improvised bomb made from an old shell casing filled with stones and debris underneath the wheel of our vehicle. Soldiers were screaming in terror and anger, clutching bloody arms and backs. They were rushed to field hospitals with broken arms and shrapnel wounds. Within twenty-four hours I had been evacuated to Germany with ear damage.

The sheer terror of that moment gave me a new understanding of the realities of war—the sights, smells, sounds, taste, and touch of combat. That gave me a starting point for this book. But what drove me to write it was meeting the marines of 1st Battalion, 2nd Marines, a couple of months after I got out of Iraq, at their home base of Camp Lejeune, North Carolina. These marines had been at the heart of the U.S. forces’ push to Baghdad and they had an amazing story to tell—a story of boundless camaraderie and bravery amid the anguish, suffering, brutality, and stupidity of war.

Like the rest of the coalition forces who went to Iraq, the majority of the men of 1st Battalion, 2nd Marines had never tasted combat. They arrived in Kuwait as unremarkable, brash young men hyped up by the prospect of testing themselves, of firing their weapons for real, of killing people. They also arrived as part of the world’s most technologically advanced fighting machine, bristling with awesome weaponry and backed by top-class military training.

Yet nothing prepared the marines of 1/2 for what happened next. It was March 23, 2003, the third day of the war. Their commanders had tasked them with an important but relatively straightforward mission in Nasiriyah, a city in one of the least hostile parts of Iraq. As they attacked into Nasiriyah, the marines of 1/2 were brimming with the confidence of a military force that knew what it was doing and why it was doing it. As the day went on, they were caught up in the chaos and uncertainty of combat, what has been called “the fog of war,” fighting for their lives against an enemy that they hadn’t anticipated and didn’t recognize. This is the story of what happened to that group of ordinary young men on the battlefield that day. It was a day that changed them forever. And a day that revealed some of the reasons for the confusion and chaos that still reigns in Iraq.

CASINO SHUFFLE by Fields Jr., J.
Tall, Dark & Apocalyptic by Sam Cheever
The Year of the Gadfly by Jennifer Miller
Sucker Punch by Ray Banks
Your Call Is Important To Us by Penny, Laura
Prince's Fire by Amy Raby
The Deep Blue Good-By by John D. MacDonald
The Annam Jewel by Patricia Wentworth
Into the Fire by Peter Liney
Long Lost (Myron Bolitar) by Harlan Coben
Our partner