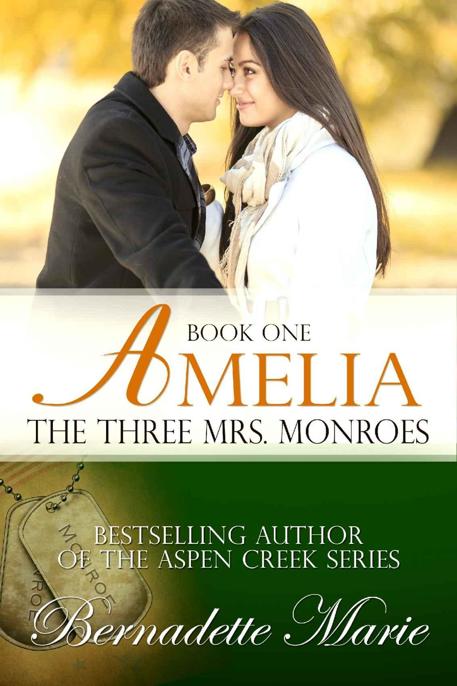 This is a fictional work. The names, characters, incidents, places, and locations are solely the concepts and products of the author’s imagination or are used to create a fictitious story and should not be construed as real.

All rights reserved. No part of this book may be used or reproduced in any manner whatsoever without written permission, except in the case of brief quotations, reviews, and articles. For any other permission please contact 5 Prince Publishing and Books, LLC.

Other books by Bernadette Marie

Cart Before the Horse

You’re always the man behind the woman when I need you to be—usually holding me up when I think it would be easier to fall.

To Stan and our boys who delight me everyday and give me reason to climb out of bed and face the world. You are my power!

To Mom, Dad, and Sissy, you give me the base to every story I write—family. I believe that my power came from family.

To Connie, Clare, Marie, and Grace, you are the charge to my battery. Without you at my side perhaps I wouldn’t have the strength to empower others to reach for their stars.

To June and Sara, it may have been books that brought us together and books that keep us engaged daily, but it is strength in sisterhood that keeps us together.

To my Street Team and Beta Readers, you are the food that feeds me and gives me strength. Without your encouragement the journey wouldn’t be as much fun.

It’s funny how an author’s mind works. One day you wake up with this amazing idea for a book series and you begin to write. Then one day you pick up an old notebook from years ago and find that you planned the same book series back in the days you dreamed of being an author.

The Three Mrs. Monroes is one of those series I wrote down years ago. I’m so excited that now I can bring the stories of Amelia, Penelope, and Vivian to you as I always had planned.

Amelia is a strong woman. Raised by her father and her military mother, she knows a thing or two about being strong bodied and minded.

Sam Jackson is more brainy than brawny, but he knows when a woman is the right one and nothing can scare him away.

Of course a strong woman needs strong friends and that is what Amelia finds when she shows up at her husband’s funeral and there are two more Mrs. Monroes.

I hope you enjoy the story and the sneak peak at Penelope.

God she was miserable

Amelia Monroe rolled up the window on her Ford Blazer as she turned down the dirt road which led to the small church. She’d only been to Parson’s Gulch, Oklahoma once, and she certainly hadn’t been privy to its back roads.

No, her husband Adam didn’t want anything to do with the small town—and now she knew why.

She pulled into the lot of the small church and her heart began to race and a pain in her chest forced her to suck in a deep breath. She’d filed for divorce three months ago. Adam Monroe had lied to her for two years. There had been so much more to him and she’d failed to see it.

Now she sat in her truck, the heat suffocating her, as she watched his other wife and their two children climb from the black limousine and walk into the church.

The bastard had been married, with a family, long before he and Amelia had met. That was the end of her marriage. In that moment, she’d even contemplated killing him, but that wasn’t how she did things—she was just angry.

Amelia Monroe had been raised to think calmly and use her words to fight, not her hands—though she could. She was plenty capable of killing the man. She was a trained martial artist. There were hundreds of ways she could have taken him down.

There had been no need to do that though. A land mine in Iraq had ended his life.

She sucked back tears as she thought about it. Damn it, he might have been a bastard, but she’d loved him. His death wasn’t what she’d wanted—not really anyway.

She’d just wanted him to suffer for his lies and his deceptions. She didn’t want him to be taken from his children—now that she knew he had them.

But here she was at the funeral of her husband and she’d opted to not be singled out. There would be no front pew in the church. She didn’t want a flag or a limo. It would be better off if no one knew she was here.

She’d made the trek for peace of mind and, well, he was her husband. The fact that the attorney wanted to meet with her and Adam’s other wife after the funeral also had pushed her to attend. After all, there was a lot to sort out.

Well, Amelia wasn’t one to run. She’d hold her chin high and she’d face the woman Adam had lied to first. The children were only four and two. She wouldn’t do anything to upset them. There wasn’t a need for it. Besides, she knew one thing that the other woman didn’t. The day was only going to get worse.

In the front pew of the church sat Adam’s
first
wife, her children and what Amelia would assume were her parents. On the other side were his parents.

She’d never met them, but she recognized them from pictures. In fact, only until five months ago she was under the impression they were both dead.

She took a deep breath and let it out slowly as she sat down in the back pew of the church.

A man in a gray tailored suit stood at the end of the pew. “Are you Amelia?”

She held her breath. This wasn’t what she wanted. She didn’t want anyone to know who she was. With a slow nod she acknowledged that she was indeed Amelia.

The man extended his hand and she shook it. The tension in her shoulders began to slide away. At least this man carried as many secrets with him as she did.

“Do you mind if I sit with you? I don’t know anyone else.”

Amelia moved over and Sam sat down next to her. “You don’t know Vivian?” she whispered and nodded toward Adam’s other wife.

“No. My business with Adam was mostly done in Oklahoma City. I never met his wife. Wives.” He gritted his teeth. “Sorry.”

Amelia clasped her hands in her lap. “Not as sorry as I am.”

The small church had filled. The mourners were obviously from the community and had probably known Adam since he was a child. Many had gone to the front and hugged his mother and Vivian. The children, one on each side, stayed close to her.

As the pastor spoke to the congregation, Amelia’s eyes were glued to the casket draped with an American flag. She hadn’t seen Adam in months. The last time they’d spoken, they’d fought. She’d told him she’d wanted a divorce and he argued with her over it. He said it had all been a big mistake, but she knew that was a lie.

Oh, she’d hoped he’d pay for what he did. This, however, wasn’t what she’d had in mind.

She lowered her head and wiped her hand across her forehead.

Sam bent his head down. “Are you alright?”

The funeral was almost over when another woman walked through the door. She looked frazzled as if she’d taken that first dirt road and not the second, which Amelia had been warned about.

She’d been crying—a lot. Sam nodded to Amelia to scoot down and then signaled to the woman to sit next to him. She finally did so.

She let out a long breath as the pastor walked toward Adam’s other wife and gave
her
a hug.

There was no reason to cause a scene. Sam was Adam’s attorney. He was the only reason Amelia had made the trip. Obviously, Adam thought enough to have left her something and that’s why she was here.

She wasn’t one to point fingers and make others mad, that was why she’d asked for a divorce. She wasn’t the kind of woman to show up on Vivian Monroe’s doorstep and tell her that her husband of ten years had been married to her for two years. What good would that have done for his children?

Amelia watched as Vivian’s daughter clung to her and her other daughter was held by her grandfather. Anger was quickly creeping into the areas that mourning hadn’t filled. How could Adam have done this to his
children
?

The pall bearers stood as the pastor began to walk down the aisle. They carried the casket in a procession and his wife, children, and family followed.

As Vivian reached the back of the church she turned her head and gave Amelia a very knowing glance. One that said
you don’t belong here.

Sam touched her arm. “Are you sure you’re okay?”

“I wish you wouldn’t have asked me to be here.”

“I appreciate it,” he said as the woman next to him began to sob even harder.

The woman, with her blonde curls bouncing every time she tried to suck in a breath, shook her head. “Was that his wife? His
other
wife?”

Amelia felt a pain shoot through her chest. She leaned across, in front of Sam as the other mourners left the church, and looked the woman in her bloodshot eyes.

“Are you Penelope?” she asked through gritted teeth and the woman slowly nodded.

Amelia sat back against the pew as the church emptied out and crossed her arms over her chest.

The first Mrs. Monroe had escorted her husband out of the church.