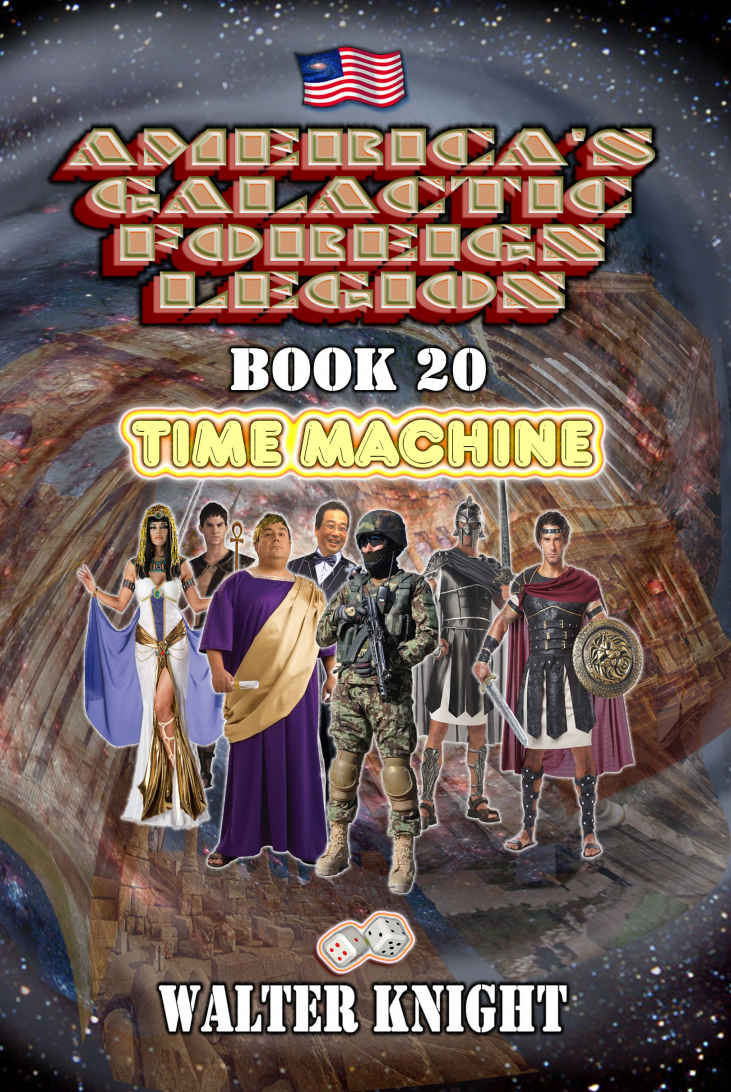 In the twentieth installment of this preposterous science fiction series, Colonel Joey R. Czerinski and Major (or is it General?) Manny Lopez guard the time machine recovered from an earlier altercation with a now-defunct alien species. Perhaps ‘guard’ is a loose interpretation of what is done with the time machine. The CIA, intent on changing the future by visiting the past, launches a mission to remold history. Meanwhile, Czerinski is tasked with overseeing the ratings-rich use of the time machine to observe historical events via drones sent back in time for ‘live’ broadcasts.

Of course, anything that can go wrong does, and Czerinski finds himself battling time paradoxes, Lopez’s evil time-twin from the future, and
his own greed in an attempt to keep the time-space continuum in balance. The Arthropodan spider commander is pulled into the fray when Czerinski, while remotely observing Jesus’ crucifixion in the past, accidently transports the revered prophet to the future – and all Hell breaks loose. It will take nothing short of a miracle to fix this mess, but with Jesus now inducted into the Legion, courtesy of a sneaky ATM, maybe God will have to step in and take charge.

Whatever happens, the laughs are sure to keep coming.

This is a work of fiction. Names, characters, planets, asteroids, alien species, evil empires, galaxies far, far way, or future events and incidents, are the product of the author’s imagination, or are used fictitiously. Any resemblance to actual persons or aliens, living or dead, events or locales including those on Mars and New Colorado, is entirely coincidental.

Licensing Note: This ebook is licensed and sold for your personal enjoyment. Under copyright law, you may not resell, give away, or share copies of this book. You may purchase additional copies of this book for other individuals or direct them to purchase their own copies. If you are reading this book but did not purchase it, or it was not purchased for your use only, out of respect for the author
’s effort and right to earn income from the work, please contact the publisher or retailer to purchase a legal copy.

~BOOKS BY THE AUTHOR~

Vampire in the Outfield

I dedicate
America’s Galactic Foreign Legion – Book 20: Time Machine
to American hero James Nicholas Rowe. A special thanks to Penumbra Publishing editor Patricia Morrison for sticking with me and making my science fiction dream come true. I also want to thank the growing number of friends I’ve given cameos to in my books. Just remember, upset me, and you’re dead.

Emperor Hirohito was woken from his nap by a phone call from Admiral
Yamamoto. “This had better be important,” snapped the Emperor.

“Is this a crank call?” asked Emperor Hirohito incredulously.
“Who is this? You bombed who?”

“This is Admiral
Yamamoto. I attacked Pearl Harbor.”

“You ordered me to attack the American fleet. I am but your sword.”

“You fool!
I told you to attack the United Kingdom, not the United States!”

“Are you sure?
We’re already at war with Britain.”

“Exactly my point!
Is there anyone left we are not at war with?”

“The Russians, but those round-eyed godless
Commie bastards are next,” answered Admiral Yamamoto maniacally. “The Divine Wind will blow across the world and kick butt!”

“The only wind blowing is out your ass!” admonished Emperor Hirohito.
“Someone is going to fall on their sword for this debacle. I’m the Emperor, so it won’t be me!”

“But I bring news of victory,” bragged Admiral
Yamamoto. “We caught the Americans sleeping.”

“You wake a sleeping giant and call that news of victory?
What were you thinking?”

Emperor Hirohito opened an atlas of the Pacific.
Perhaps this mess isn’t so bad
, he thought, studying the map. “Did you say you sank the entire American fleet?”

“Their aircraft carriers got away,” advised Admiral
Yamamoto contritely. “But we sank their battleships. Victory is ours!”

“You putz!
I’ll call Roosevelt and try to explain your incompetence as a case of mistaken identity. You thought you were bombing Australia. Fog of war, and all that.”

“We bombed Manila, too.
It was a coordinated surprise attack. Remember?”

“No, I don
’t remember! Now listen here, you little shit farmer. Withdraw to the east before the Americans catch you. Heads will roll over this one!”

“At once, Your Majesty.”

“Did you think you could conquer the world?”

“Yes, Your Majesty.
That was our plan. It seemed like a good idea at the time.”

A shadowy figure stepped out from ... the shadows. Actually, it was time-traveler extraordinaire, General Manny Lopez, coming out of the closet.

“Who
’s there?” asked Emperor Hirohito, clutching his Samurai sword. “Show yourself!”

“Not good, bringing a knife to a gunfight,” scoffed General Lopez contemptuously.
“Drop it!”

“I am your worst nightmare, you stupid
bendaho
. I am vengeance for all those you’ve murdered.”

“What?
Did that fool Yamamoto bomb Mexico by mistake, too? It’s not my fault. I love Mexico. Your burritos are to die for!”

“And so you shall,” threatened General Lopez, drawing his
nine-millimeter pistol menacingly. “You will be executed for war crimes, and the murder of countless millions.”

“But it
’s not my fault,” pleaded the Emperor. “The Prime Minister handles foreign affairs. I never get involved in all the little details of how to conquer the world. There’s not enough time in the day for that. I just run the palace and the geisha house. Let me set you up with Nonami. She’s so hot.”

“Tell your sad story of innocence to the Chinese.
Tell our heroes entombed on the Arizona. The buck stops here.”

“No!
I never wanted war. I got this gig on a platform of enlightened peace. It was the military industrial complex that wanted war. Their lobbyists are ruthless.”

“I
’ll bomb Mitsubishi next,” promised General Lopez, aiming his pistol. “Make your peace with Buddha. Smile for the camera. Say cheese.”

General Lopez shot Hirohito in the head, between the eyes, splitting his wire framed spectacles. The Emperor fell back in a bloody clump on his bed.

“Burn in hell,” said Lopez, somberly crossing himself.
“You’ll have plenty of company before I’m through.”

I am Colonel Joey R. Czerinski of the United States Galactic Federation Foreign Legion.
I command garrison troops on the planet New Colorado. Hopefully this is my last assignment before retirement in a rich life to which I’d like to be accustomed. My battalion guards a time machine. Per the Strategic Arms Limitations Treaty, security is shared on a neutral site in the DMZ with the Arthropodan Empire. Together, we serve as a sort of Praetorian Guard.

Humanity and spiders agreed time travel was too dangerous except in cases of extreme emergency.
Only academicians and historians are allowed to send probes and drones to document and record major historical events. Media experts predict Jesus Christ’s crucifixion to be an all-time box-office hit. I’m personally working on that project.

Our uneasy truce with the Arthropodan
s still holds, but both sides remain wary of the other, for good reason. Time travel to any place or time can be a powerful weapon. Vigilance is essential to galactic peace because spiders cannot be trusted. I know that to be a certainty from prior experience.

You can
’t trust humans, either. We violated the SALT Accords the first day. Apparently a future version of my XO, Major Manny Lopez, is already running amuck in the past, attempting to change history. Promoting himself to general, Lopez’ evil twin sent me a video of the assassination of Japanese Emperor Hirohito during World War II. Major Lopez denies any complicity, past, present, or future, but the video is clear. Worse, the Lopez in the video also claims I promoted myself to President.

Me President?
Ha! That’s a good one. I wouldn’t take the pay cut, or live in a crappy Old Earth neighborhood like Washington, DC. I’ve never been interested in politics or volunteered for anything. Sure, I’m a registered Republican, but only because they don’t allow suspected Democrats loose past Mars. Better to keep the fools contained. I only volunteered to guard the time machine because the spiders specifically requested me, and I was hoping to score on sports bets and stock-market insider trading. I’m not into power, galactic domination, or treason. It’s not worth my time. Lopez, on the other hand, has always had dreams of glory.

“I swear, I
’m a loyal American,” professed Major Lopez after viewing the incriminating tape. “That’s not me!”

“Whether it
’s you or your evil twin, I don’t care. The spiders are going to have a conniption when they find out.”

“So
, don’t tell them. Don’t tell anyone. Spiders don’t care about human history anyway. We can fix this.”

“I need to know you have my back.”

“That
bendaho
on the video is not me!”

“It looks like you,” I insisted reasonably, playing the recording again.
“It’s you. I’m the President, too. We both have a problem. We need to trust each other, no matter what happens.”

“Trust human pestilence?” asked the spider commander, barging into my office like he owned the place.
“That’s a good one. What are you conspiring at now? Robbing banks? Looting antiques? Human pestilence have no morals, especially you, Czerinski.”

“Today is the day we film the execution of your Grand Prophet, Jesus H. Christ.
Not that I care, but I’m told the broadcast will make us billionaires, and I’m here to make sure you don’t screw it up.”

“There
’s no ‘H’ in Jesus Christ,” advised Major Lopez, crossing himself.

The New Champion by Jody Feldman
The Forget-Me-Not Summer by Katie Flynn
2 Murder Most Fowl by Morgana Best
Marazan by Nevil Shute
A Country Marriage by Sandra Jane Goddard
The Year of Luminous Love by Lurlene McDaniel
i 75f9a7096d34cea0 by Unknown
Brine by Smith, Kate;
Stolen Kisses (Leap of Love Book 2) by Powers, Paige
Darkest Hour by Rob Cornell
Our partner