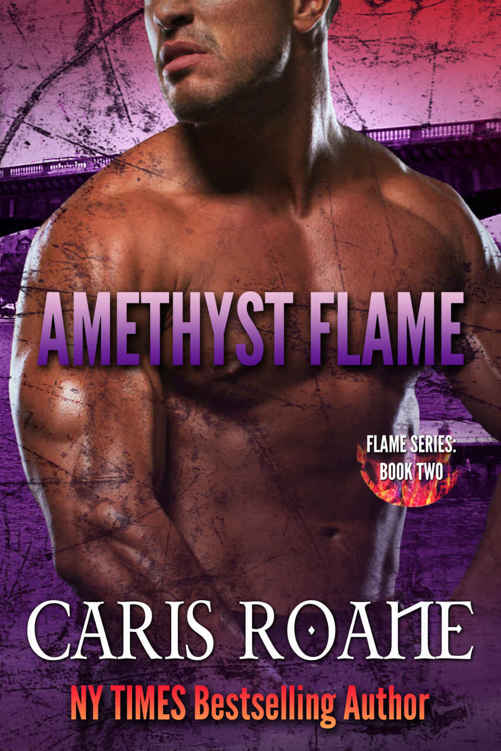 You can find Caris at...

Welcome to the second installment of the Flame Series called AMETHYST FLAME!

In this story, Vaughn, a powerful vampire serving as a Border Patrol officer for his corrupt world, falls for a dangerous witch who alone is the key to saving his long lost sister…

Vampire Officer Vaughn of the Crescent Border Patrol gets called to a triple homicide in a deadly place called the Graveyard. When he finds that Emma Delacey has been summoned to the same crime scene, warning bells sound. He’s tried to suppress his desire for the beautiful witch knowing nothing good can come of a relationship in the alter world of Five Bridges. But her auburn hair and glittering green eyes call to him as no woman has since he became an alter vampire. As an evil wizard hounds them both, Vaughn must come to terms with his deepest fears especially when Emma proves to be the key to saving his sister from a madman’s torture.

I hope you’re enjoying the Flame Series. If you’ve missed the first book, BLOOD FLAME, you can find lots of info
here
.

I’ve had a wonderful time developing a world inspired by my love for bridges and of course, hunky warrior vampire types!

“We didn’t save them after all.”

Vaughn heard the break in Emma Delacey’s voice. His own chest was damn tight and his throat hurt.

He stood beside her at the top of a deep ditch in the middle of the area of Five Bridges known as the Graveyard. Bodies were dumped here every night to be cleaned up by a designated Tribunal squad in the early morning hours.

Tonight was no exception.

He moved closer to her, blood pounding in his head. He stared down at the bodies of three familiar teenage girls, triplets in fact. Two months ago, he and Emma had rescued the girls from a despicable human trafficking organization. Now they were here, naked, beat-up, and laid out like discarded mannequins. Their arms and legs were at odd angles, bones fractured.

The bastard who’d abducted them hadn’t just killed them, he’d tortured each one.

“Jesus. They’ve been savaged.” Vaughn found it hard to breathe, but he wasn’t sure if it was grief or blind rage. He couldn’t believe the girls had been kidnapped a second time.

Emma moaned softly like a wounded animal. She’d become a good friend in recent weeks, despite the fact she was an
alter
witch and his natural enemy. He slid an arm around her shoulders.

She didn’t pull away, either. “How did Wizard Loghry find them again? I thought they were safe. Their parents said they’d take them out of state.”

“Maybe they did. But you know what Loghry is. He has massive connections throughout the Southwest. He could have hired dozens of people to hunt them down and bring them back.”

“He must have done this for revenge.”

“I have no doubt about that.”

Emma shook her head slowly, her fingers on her lips. “Maybe if we’d left them alone, they’d still be alive.”

“You don’t know that, Em. Girls like these are trapped inside Loghry’s sex clubs with no way to escape. They get used up and after a time no one sees them again.”

She took a shuddering breath. “I’ve never felt so sick about being in Five Bridges.”

He got where Emma was coming from. Having saved the girls the first time, she’d believed they’d done some good. To have these beautiful girls abducted again added to his hatred of the world they’d each gotten stuck in.

But there was another issue they had to deal with, a critical one, as in why he and Emma had been summoned to the scene. He patrolled almost exclusively in Crescent and he knew Emma rarely worked this part of Five Bridges. It felt like a set-up.

His suspicions grew as another SUV pulled up. There was no reason to have this many officers at a Graveyard homicide scene.

He recognized the vehicle as belonging to the Elegance Border Patrol and he slid his arm from Emma’s shoulders. He didn’t want her to become a target because she’d been fraternizing with a vampire.

Vaughn recognized the officer in the police cruiser, a warlock he despised. His nostrils flared. He’d as soon kill the man as get near him.

There was no love lost among the five different territory Border Patrols. But he loathed those men and women on the take no matter which species. The warlock, who stayed in his vehicle with his com to his mouth, was in deep with the three cartels that ruled the underworld of Five Bridges. So, who was he reporting back to? Probably Donaldson at the Trib or maybe the corrupt chief at the Elegance station.

Vaughn became acutely aware he’d left his half-sword in his SUV. Easton had pushed him to get out here fast and to keep a low profile. He didn’t want shots fired in the Graveyard. And he definitely didn’t want Vaughn battling any Elegance officers who might show up. Vaughn was to leave his weapons in his SUV, head to the crime scene, take a quick look, then report back to Crescent. Get in, get out.

Despite Easton’s orders, Vaughn had his Glock with him.

Vaughn reverted his attention to the crime scene and started looking for anything out of place that might indicate a bomb. But it was hard to tell. The whole massive central area of the
alter
world, known as the Graveyard, looked like a war zone made worse by an explosion a month ago. Dirt, rocks and cement had been flung all over the surrounding ditches and at least a dozen small bridges that crossed them.

Emma turned toward him and kept her voice low as well. “I know. Loghry’s hand is all over this. But Vaughn, even though we agreed never to see each other again, I’m so glad you’re here. I can’t tell you how much I’ve valued all our conversations since that first night. In fact, the only reason I think I can bear what Loghry has done to these girls is because you’re beside me.”

He felt the same way and resisted a powerful impulse to haul her into his arms and hold her.

His relationship with Emma had grown complicated since the night of the rescue. Afterward, they’d gone to a bar, one of the few that served all five
alter
species. He’d ordered a couple of beers, then another matched set.

By the time six bottles were sitting on the table, he knew he was in trouble. He’d walked her outside, then drawn her into the shadows and kissed her. When he’d suggested they go to his house, she hadn’t hesitated. Neither had she minded flying for the first time with a vampire.

The sex that had followed had been hot as hell though he couldn’t believe he’d crossed the line. Vampires and witches didn’t date.

Afterward, they’d agreed not to see each other again, but the phone had been a different case. He’d talked with Emma almost every night since. He’d call her after their respective shifts and a lot of those conversations had gone well past dawn. But this was the first time he’d seen her since the rescue. Despite the fact that she was a witch, the enemy of his kind, he couldn’t deny his powerful attraction to her or that he’d come to care about her as much as he did.

Tears shimmered in her green eyes, which made her even more beautiful than he remembered. She had thick auburn hair, the front portion pulled into her usual top knot. The rest hung almost to her waist. Her creamy complexion glowed in the moonlight and her snug jeans and t-shirt reminded him of everything he’d once held in his arms.

The pain she obviously felt about the deaths below echoed his own. Doing good in their sick, corrupt world was a rare thing, and he hated that their joint efforts to save these teens two months ago had ended in tragedy. But he had to give Emma this, she had grit and he loved that about her.

As for the author of the crime, Wizard Loghry was one of the most vicious criminals in Five Bridges. The amethyst flame addicted warlock had strong ties to the cartels that ruled the underworld of their
alter
society, which meant he was well-protected. He could do whatever he wanted without fear of repercussion.

He operated several sex clubs in Elegance Territory stocked primarily with teenage girls. He systematically abducted them from the human part of Arizona, then smuggled them past the border that separated the city of Phoenix from the cordoned off province of Five Bridges.

Sometimes the girls entered Loghry’s work establishments in their fragile human forms. Other times, he put them through the difficult
alter
process and made vampires out of them. It was rumored he liked fangs in his throat, and that he’d kept a female vampire imprisoned for years in the labyrinth below his Elegance mansion.

Emma crossed her arms protectively over her chest. “Did your boss send you out here?”

“Yep. Easton delivered his orders personally.” Chief Easton, of the Crescent Territory Border Patrol, had taken pains to make sure Vaughn made it to the Graveyard. Alone.

Emma snorted her disgust. “Donaldson came to my office himself and he never does that.”

Vaughn heard several male voices. Turning, he saw that three more Elegance Border Patrol officers had arrived and were laughing it up near the first SUV.

Vaughn jerked his chin toward them. “Any of those warlocks clean?” He was pretty sure he knew the answer, but he asked anyway.

She turned to glance in the direction of her territory’s policing force. “No. Just ignore them. They’re vermin.”

He shifted his gaze back to her. He knew she didn’t take bribes. Neither did he. Being on the take had a stench, and he could smell a corrupt officer at a hundred yards.

Over the beers he and Emma had shared the night of the rescue, she’d told him she was clean but that half the Elegance force wasn’t. He’d confessed a similar statistic for his own vampire territory of Crescent. That’s when things had shifted and he’d started seeing her as a woman he admired as opposed to a witch who could kill him with the energy she could release through the tips of her fingers.