Read Among the Wicked: A Kate Burkholder Novel Online

Among the Wicked: A Kate Burkholder Novel 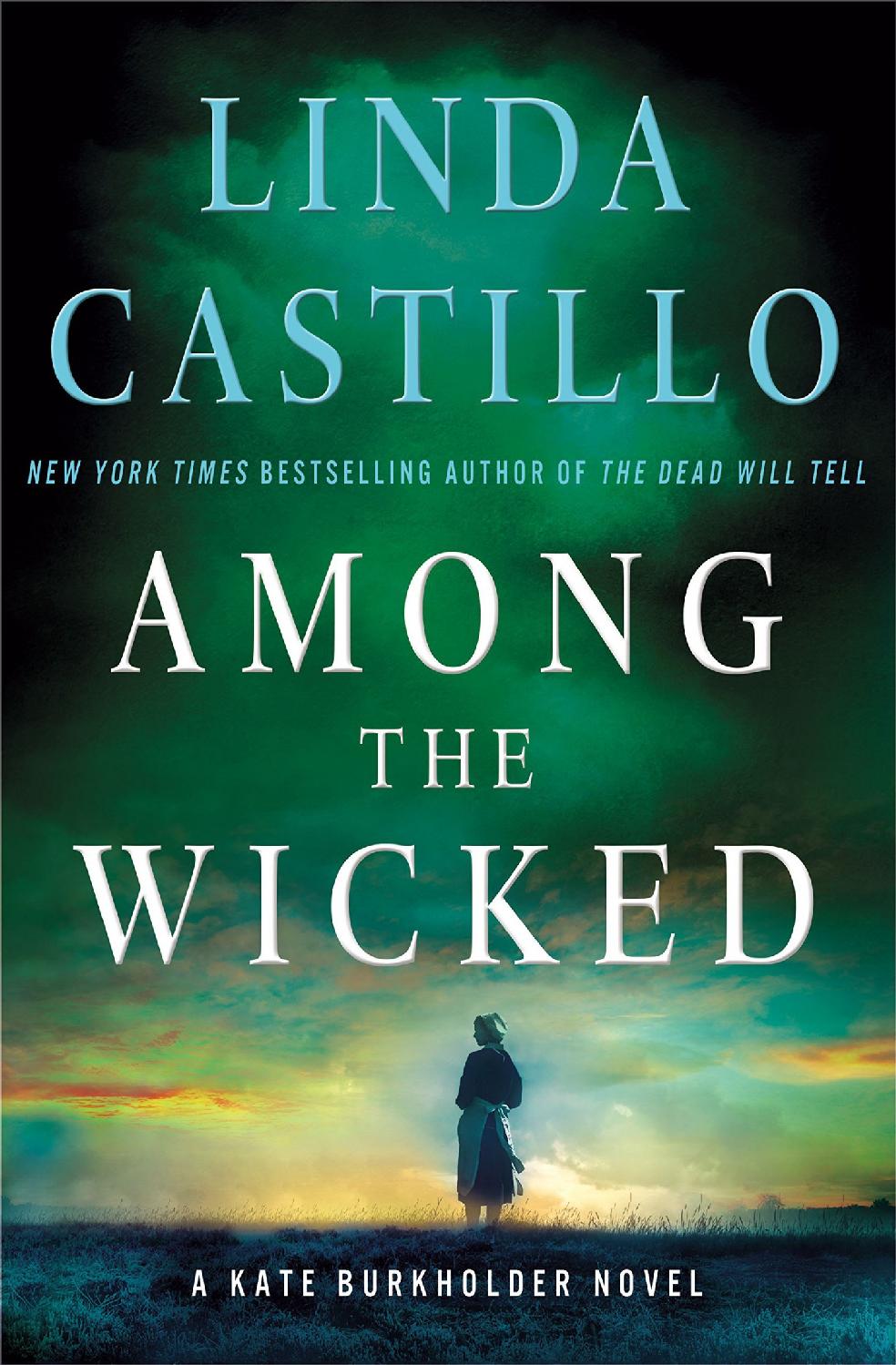 One of the highlights of being an author is having the opportunity to get out and meet readers. Every summer I travel to Ohio’s Amish Country and beyond for a book tour. I’d like to take this opportunity to thank all the wonderful librarians, booksellers, and others who make it possible: Jim Gill at the Dover Public Library; Dawn Groves at the Massillon Public Library; Jodie Hawkins at the Stark County District Library, Lake Community and Perry Sippo Branches; Pam DeFino at the Cuyahoga County Public Library, Berea Branch; Holly Camino at the Medina County District Library; Sharon Kelly Roth at Books & Co. in Dayton, Ohio; Barbara Peters at the Poisoned Pen in Scottsdale, Arizona; Jill Miner at Saturn Books in Gaylord, Michigan; Robin Agnew at Aunt Agatha’s in Ann Arbor, Michigan; John Kwiatkowski at Murder by the Book in Houston, Texas; all the fine members of the Dover Rotary Club (and those great lunches!); and of course I would be remiss not to mention radio personality and all-around fun guy Bob Scanlon at WJER Radio in Dover for those fun-filled mornings at Williams Furniture. Thank you so much for supporting me and the books, for making every event such a success, for spending time and sharing stories with me, and for making all of it so very enjoyable.

I also owe much gratitude to the brilliant and dedicated publishing pros at Minotaur Books: Charles Spicer, Sally Richardson, Andrew Martin, Jennifer Enderlin, Sarah Melnyk, Jeanne-Marie Hudson, Kerry Nordling, Paul Hochman, Kelley Ragland, Marta Ficke, April Osborn, David Rotstein, and Melissa Hastings. Many heartfelt thanks for all you do to bring the books to life. (And for always showing me such a fabulous time when I’m in New York!)

I also wish to thank my friend and agent, Nancy Yost. For everything—thank you!

Blessed is the one who does not walk in step with the wicked.

She waited until three
A.M
. She’d tried to sleep, but it was a fruitless endeavor. Instead, she spent five hours twisting in sheets damp with fear sweat, heart pounding, her mind running the gauntlet of the myriad things that could go wrong. Finally, too wired to lie still a moment longer, she tossed the covers aside, rose, and stripped off her nightgown.

Kneeling, she pulled the neatly folded clothes from beneath the bed where she’d hidden them: Long underwear. Blue jeans. Sweater. Two pairs of socks. Insulated gloves. Wool hat. It had taken her weeks to amass those few simple necessities; she’d been forced to delay her escape twice. She’d stolen for the first time in her life. Lied to people she loved. But she’d finally collected enough cold weather gear to get her through. The rest was up to God.

Shivering in the darkness, she pulled on her clothes and tucked the gloves into her pocket. She listened for signs that someone else was awake, but the only sounds were the hiss of cotton against her bare skin and the quick in and out of her breaths. She’d wanted insulated boots, preferably with some tread, but she hadn’t been able to afford them, and they were too unwieldy to steal. Her muck boots were going to have to do.

Fully dressed, she slid the cell phone from beneath the mattress. She never risked leaving it on; cell phones were strictly forbidden by the
Ordnung
. The punishment for such a transgression would be brutal and swift. Hopefully, she had enough battery left for the only call she needed to make.

Shoving the phone into the rear pocket of her jeans, she padded in stocking feet to the bedroom door. A smile came to her face when it glided open without so much as a squeak. Amazing what a little lard did to an old hinge. And she reminded herself it was the inattention to details that got you caught. That, she thought, and trusting the wrong people.

Not her. She didn’t trust anyone. Hadn’t for a long time. Sometimes she didn’t even trust herself.

She’d planned this excursion for weeks. She’d run through every detail a thousand times. Envisioned the hundreds of things that could go wrong, and adjusted her plan accordingly. She’d visualized success, too. And she’d never lost sight of what it would mean to her life. It was the one thing that kept her moving forward when everything else was lost.

Silently, she crept into the hall, where scant feet away, the doors to three other bedrooms held the threat of discovery. There were no windows in the hall, no light of any kind, but she’d anticipated the darkness. She’d memorized every step and knew her route as intimately as she knew her own face. Three strides and she reached the stairs. Hand on the banister, the wood hard and slick beneath her palm. She knew not to touch the wall, or risk knocking the picture off its hook. Senses heightened to a fever pitch, she crept down the steps, skirting the fourth one to avoid the squeak of the nail against wood.

At the base of the stairs she paused again to listen, but all she heard was the buzz of the kerosene refrigerator in the kitchen and the tick of the clock above the stove. The sounds were nearly eclipsed by the roar of fear in her head. She could feel her knees shaking; her hands were unsteady, her palms wet with sweat. She couldn’t afford to be afraid; fear was a distraction that led to mistakes, and dear God, she would not screw this up. She tried to calm herself—a deep breath slowly and silently released—but it was no use. Terror was a dark presence, its breath hot on the back of her neck.

The faint rectangle of the kitchen doorway beckoned. No flicker of the lantern. No one awake at this hour. To her right, the muddy light from the front window seeped into the living room. The three-quarter moon was another detail she’d meticulously planned for. What she hadn’t counted on was the cloud cover. It wasn’t going to stop her.

She moved across the plank floor as soundlessly as a ghost. Through the kitchen, linoleum cold against her feet even through two pairs of socks. Then she was in the mudroom. Colder there. No heat. A draft blasting in beneath the exterior door. Coat on the hook. Not heavy enough, but it would have to do. Her boots were next to the rug where she’d left them after mucking stalls earlier, still smelling of horse manure. She shoved her feet into the boots. Pulled on the coat. Buttoned it with shaking fingers. She tugged the gloves from her pockets, jammed her hands into them. Sweating now beneath the coat. Breaths coming short and fast. Fear mocking her as she reached for the knob, telling her she couldn’t do this. She didn’t smile this time when the door glided noiselessly open.

Outside, snow coming down hard. A quick shot of dismay. She should have anticipated it. For an instant she worried about leaving tracks. But as she made her way down the porch steps, she realized it was snowing hard enough to cover any trace that she’d been there. The low visibility would work to her advantage, too. If someone happened to wake up and look out the window, they wouldn’t see her. Another gift from God.

A hysterical titter squeezed from her throat as she sprinted across the yard. Awkward in the muck boots. Feet silent against the snow. Breaths puffing out in front of her. Snowflakes pecking at her face like sharp little beaks. She ran past the shed. Ducked beneath the clothesline. She could just make out the hulking shape of the barn twenty yards to her left. Remembering to avoid the horses lest they whinny in anticipation of hay, she veered right. Past the T-post demarcating the garden. The maple tree in the side yard.

She reached the rail fence, scaled it with the ease of a gymnast, landed on her feet on the other side. Through the veil of white, the mottled wall of trees beckoned. A profound sense of liberation engulfed her as she raced across the pasture. Boots crunching over tufts of frozen grass. The wind whipped at her face, yanked at her coat and hat. Snow stung her eyes. But she knew exactly where to find the mouth of the path cut into the woods. A deer trail she’d been widening and clearing for weeks now. The sons of bitches should have paid closer attention to how she spent her afternoons.…

The woods swallowed her, taking her in. The wind chased her for several yards and then tapered off, unable to penetrate the trees. Otherworldly silence all around. The tinkle of snow pellets. She ran for a hundred yards, careful to avoid the fallen log that had been too heavy for her to move. Stooping to avoid the low branch that had been too thick to break.

She stopped in the clearing, bent at the hip and set her hands on her knees. A minute to catch her breath. She had time. Only two miles to go. Past the lake ahead. A right turn at the deer blind. From there, another mile to the road. The most dangerous part of her plan was done.

Giddiness rose inside her. She choked out another laugh, a maniacal sound in the dark and the snow. “I did it,” she panted. “I did it. I
did
it.”

Straightening, she wiped a runny nose and glanced behind her. Another layer of relief rippled through her when she found the trail empty.

“I beat you,” she whispered. “Bastards.”

She started down the trail at a jog, finding her rhythm, settling into it. Snow stinging her cheeks, making her eyes tear, but she didn’t care. Trees swept by. Elation pushed her forward. So close now she could smell the sweet scent of freedom. A new life. A future.

She reached the lake, a low plane of white to her right. For fifty yards the path ran parallel with the bank. The snow sparkled like diamonds on the ice. On the other side, another line of trees. Muscles screaming, lungs burning, she picked up the pace. One foot in front of the other. Faster now. Comfortable with the pain. Bring it on.

The sight of the footprint stopped her dead. Panting, she stared, confusion and disbelief pummeling her like fists. Alarm knocking at her brain. Terror breathing hot down the back of her neck.

Not possible
, she thought.

Her eyes tracked the prints left, into the woods. Not yet covered by snow.
Fresh
. But who would be out here in the middle of the night? Even as her brain posed the question, another part of her already knew, and the knowledge sent a lightning strike of adrenaline burning through her.

A dozen scenarios played in her mind’s eye. Continue down the trail at a faster pace, outrun them. Abandon the trail and flee into the woods, lose them in the trees. Or set out across the lake and escape into the forest on the other side. But she knew that wasn’t a good idea. While it was bitterly cold tonight, the highs last week had hovered near fifty degrees. She wasn’t sure the ice was thick enough to support her weight.