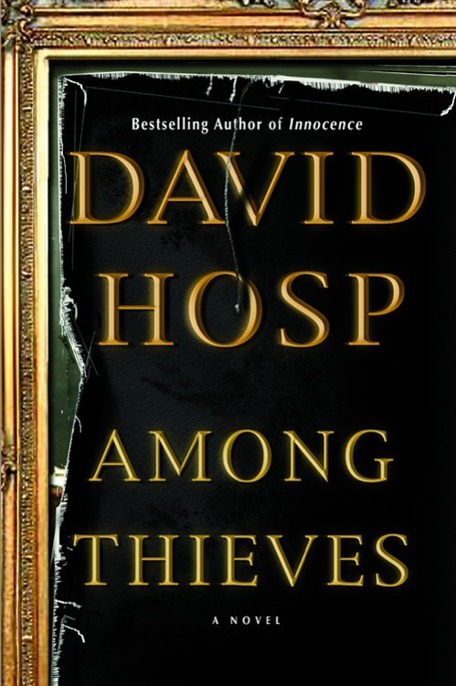 The events and characters in this book are fictitious. Certain real locations and public figures are mentioned, but all other
characters and events described in the book are totally imaginary.

For Joanie, with my love

The largest art theft in history took place in the early morning hours following the 1990 St. Patrick’s Day celebrations in
Boston. Two men dressed as police officers entered the Isabella Stewart Gardner Museum off the Fenway, tied up the guards,
and made off with thirteen works of art. Several of the stolen masterpieces were priceless, including two oil paintings and
an etching by Rembrandt, a rare work by Vermeer, a Flinck, and a Manet. The thieves also took works of lesser value, including
five unfinished Degas sketches, a Chinese beaker from the Shang dynasty, and a finial that adorned a flag from Napoleon’s
army.

The works have never been recovered. Today, their value is estimated at half a billion dollars.

Liam Kilbranish looked down at the lump of flesh curled in front of him on the cement floor. His heart rate was steady; his
movements economical. His eyes were nearly as black as his hair.

“Still no answer?” he asked.

The lump gave a moan. Liam knew it was useless. It would continue.

He could remember how it had started for him. Or ended. It was all a matter of perspective, he supposed. Whichever view he
took, the memory was etched in his mind, as solid and real to him as the gun in his hand. He would have said he remembered
it as if it were only yesterday, but no yesterday he’d known in the three and a half decades since had ever lived and breathed
for him like that night. It was what drove him; what made him who he was, for good or for bad.

He’d been reading when they arrived, tucked away in the tiny closet of the ten-by-twelve room he shared with his brothers
in the row house south of Belfast. A worn woolen blanket was bundled about his spindly, pale, nine-year-old legs; the beam
of his flashlight was trained on the pages cradled in his lap. He’d always been a solitary boy, and the closet had been his
refuge—a place where he spent hours on end, reaching into other worlds as his brothers slept undisturbed.

He was devouring
Winnie the Pooh
yet again. It had been a favorite of his since the times, years before, when his father would read to the family in front
of the fireplace in the living room. Gavin Kilbranish, his father, was a hard man; a dangerous man when crossed or disobeyed;
a man who saw the world in bold strokes of black and white. And yet when he read to his children there was a richness to his
voice that hinted at another side, banished and almost forgotten. It was that side of his father Liam sought through the words
on the page as he nestled on the closet floor.

Pooh had just gorged himself on Rabbit’s honey, swelling his belly until he could no longer escape from Rabbit’s hole, when
Liam heard the front door shatter. He switched off the flashlight and brought the blanket up around his chin. The smell of
the plain, soapy detergent that reminded him of his mother still lingered in his mind, haunting him.

There were four of them. Dressed in black, with ski masks and assault weapons that gave off a dull gleam when they caught
the shafts of moonlight carving through the saltbox house’s narrow windows, the men moved through the dwelling with military
efficiency. Liam listened as they rounded up the others in his family from the front of the house—Mother and Father and Meghan
and Kate—and pushed them into the back bedroom he shared with his brothers.

He watched the scene unfold through the crack in the closet door as his parents and siblings were lined up in front of the
bed along the far wall. He could read the confusion in their faces—expressions of fear and shock, mixing with the disorientation
of being ripped so abruptly from deep slumber. Only his father’s face reflected comprehension. Gavin glanced briefly at the
closet door and gave a nearly imperceptible shake. Liam fought the urge to emerge from hiding to join his family.

The tallest of the intruders stepped forward and addressed Liam’s father. “Gavin Kilbranish,” he said. It sounded as though
he was pronouncing a verdict. “You know who I am?”

“Then you know why we’re here.”

The man stepped back and turned to one of the others. “He’s yours if you want him, lad.”

The second man walked over to Liam’s father, unslung his gun and drove the butt into Gavin’s stomach, doubling him over. Then
he swung it upward, connecting with his jaw, and Liam’s father crumpled to his knees. He was on all fours, spitting blood
into the cracks between the scarred floorboards. It was the first time Liam had ever seen his father at the mercy of another
human being.

The second man knelt before him and produced a small weathered book of snapshots. Opening it, he held up a picture of a hard-bitten,
middle-aged man. “My da,” he said.

He drove a fist into Gavin’s nose. The sound of cartilage snapping was loud, and Liam was afraid he might be sick. The man
flipped a page and held up a new picture, this one of a younger man. A shadow of the previous face remained. “My brother,
William,” the man said.

The words still hung in the air as he cracked the butt of his gun down over Gavin’s head. His scalp split and blood flooded
forward over Liam’s father’s face.

A new page was flipped, revealing the image of a young woman. “My wife, Anna.” The man stood and kicked Gavin hard in the
ribs, drawing a wheeze and a grunt. Gavin’s spit was now a frightening mixture of blood and mucus.

The man stepped back and turned to a final picture that showed the angelic face of a young girl. She couldn’t have been more
than five, and her gap-toothed smile seemed at once joyous and mournful. The man pulled a black pistol from underneath his
coat and pointed it into Gavin’s face. Gavin rose up on his knees and looked back at the man. He showed neither panic nor
fear; only hatred and defiance.

The man in front of him had both hands out now, one pointing the gun at Gavin’s head, the other clutching knuckle-white to
the picture of the girl. “My daughter, Katherine,” he said. His voice cracked with unredeemed rage as he said her name.

He pulled the trigger.

The screaming lasted for only a moment, and it was drowned out by the thunder of gunfire. Liam’s mother and four siblings
jumped and danced as the bullets shredded their bodies. They fell over each other in their attempt to twist free, toppling
onto the bed behind them, settling and then sliding onto the floor, leaving the sheets stained red.

At last there was silence. Two of the men dressed in black moved forward, nudging the bodies with their toes to make sure
the family was dead. After a moment Liam heard a choked sob from the man with the pistol who had killed his father.

The tallest of the group—the leader, Liam assumed—slapped him. “We’ll have none of that shite,” he said. “Bastard had it coming.
He knew it.”

“And his wife? His children?”

“It’s war. Did he show pity to your family? Besides, do you think this would have ended it for them? It won’t be ended until
they’re all dead—or we are. Which would you have?”

One of the other men stepped back from the bodies. “It’s ended for these now,” he said indifferently. “All done for. Good
enough.”

Then they were gone.

Liam stayed in the closet until the military came. The police wouldn’t enter the Catholic neighborhoods anymore; it was too
dangerous. The armored vehicles rolled in and squads of soldiers in riot gear cordoned off the area, enduring the taunts and
jeers from the crowds that had gathered outside the Kilbranish home. Liam was questioned, but said nothing. Not a word. Not
for six months. Everyone thought that the trauma had destroyed him. In a sense it had, though not in the way they supposed.

Now, thirty-five years later, he knew the leader of the death squad had been right. It hadn’t ended, even now that the politicians
had signed their unholy alliances and smiled their oily smiles at each other across mahogany conference tables. It would never
end; not as long as he lived.

He took a deep breath and brought his pistol up, leveling it at the man on the ground in front of him. Blood had soaked through
what was left of the man’s shirt and there were places on the man’s face where the skin had been ripped so thoroughly that
bone flashed through.

The man sobbed. “Please… I don’t know.” He had his hands up in supplication, the blood dripping down from the holes in his
palms and running off his elbows.

He pulled the trigger and the man’s head snapped backward, one last spray of blood coating the wall behind him. Liam walked
over and fired another round into the pulp that remained above the man’s shoulders. It was unnecessary, but he was well trained.
He reached down and dipped a gloved finger into the pool of blood by the body. He took a step away, and wrote two words in
blood on the floor. Then he stood and nodded to Sean Broadark, who remained by the doorway. Few words had been exchanged between
the two of them. They weren’t friends, they were professionals.

“Why?” Broadark asked, looking at the bloody scrawl.

“I want to send a message to the others.”

Broadark asked no more questions. He watched Liam as he took one last look around the garage. Then Liam walked past him, to
the door, and the two of them walked out into the cool South Boston evening.

Scott Finn trudged up the front steps of the Nashua Street Jail. A thin streak of sunshine poked through the clouds, drying
the cement in uneven lines. It was the fourth week of spring, but a few isolated piles of brown snow could still be found
dying slowly in the cervices of Boston’s streets and alleys, and the city smelled of dog shit and winter rot—an oddly satisfying
sign that warmer weather was on the way.

Tucked behind North Station and the Garden, the jail was not a place stumbled on accidentally. You had to be looking for it,
and even then it wasn’t an easy find. To make the effort less inviting, there was no public parking. None. Not that it was
a problem for Finn, of course. Every month he slipped the parking attendant at the rehab hospital across the street fifty
dollars to let him park his battered MG there when he needed to. It made his life easier. He was a lawyer; he made life easier
when he could.