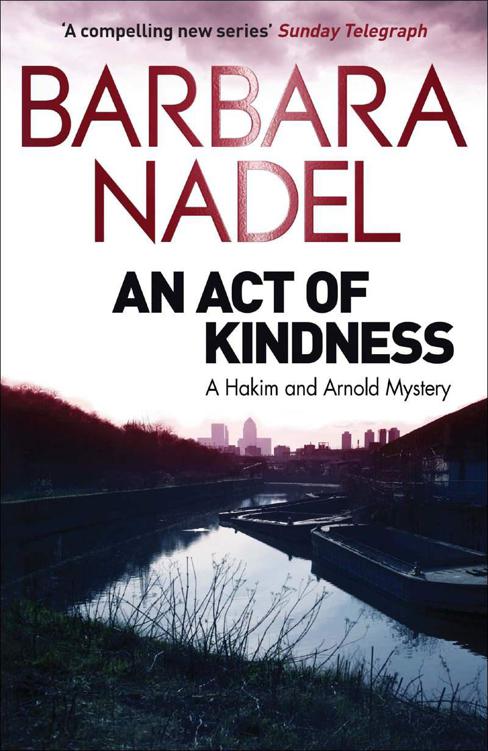 The moral right of Barbara Nadel to be identified as the author of this work has been asserted in accordance with the Copyright, Designs and Patents Act, 1988.

A Passion for Killing

River of the Dead

Sure and Certain Death

To my husband, who is still here, still putting up with it all and to my son who is a constant source of inspiration

It looked like nothing. A tiny piece of paper that spiralled down towards the floor on a parachute of dust. She could have ignored it. If it hadn’t landed face up she certainly would have.

It was a black and white photograph of a woman. Nasreen picked it up. Dark-haired and unsmiling, the woman looked somewhat like her aunt Shahana. But there was something more European about this face. The eyes were heavy, reminding her of the eyes of some of the Romanian boys she saw flogging fake Adidas tracksuits in Queens Market. Too thin and plain to be what Nasreen always thought of as typically Italian, there was a kind of beauty in the woman’s face but it was not of an obvious or comfortable nature. This was someone who, though far from old, had done a lot of living. And even though the image had faded over time, Nasreen could see that the eyes were full of pain. She turned the photograph over in her hands and wondered what had happened to this woman.

Nasreen had been sanding down the front door when she’d spotted it, an ancient paint-encrusted lump stuck to the doorframe. To begin with she’d thought that it was merely a build-up of paint. The house hadn’t been repaired or decorated for decades and she and Abdullah had found layers of paint and wallpaper that probably dated from the 1940s. But this lump was different.
As she’d chipped away at it with her scraper, Nasreen had seen that it was some sort of capsule fixed to the doorframe. About the same length as a wide, flat lipstick it was attached by screws, forced through metal loops at either end. She went into the house to find a screwdriver. When she returned, she gave the thing a tug and it came away easily from the rotten wood of the frame. The photograph had floated down to the floor from behind it. Someone had hidden it there. Why?

Nasreen and Abdullah had only just taken possession of the house and were both still excited to be home owners. But, due to the state of it, they hadn’t moved in and were still living with Nasreen’s parents a few streets away. Until they managed to make the place habitable, things would have to stay that way.

Abdullah called down from the bathroom, where he’d been knocking out a sink the colour of stewed tea. Now the banging coming from upstairs stopped. ‘How you getting on?’ he shouted, over the top of the CD player belting out Paul Simon’s ‘Graceland’. His accent always reminded her a little of that comedian Peter Kay. It made her smile.

‘I’m still scraping off paint.’ Nasreen didn’t tell him about the paint-encrusted lump or the photograph. She put them both into the pocket of her jeans, like secrets. She didn’t know why.

Lee Arnold knew that his assistant Mumtaz Hakim wouldn’t join him when he went out to get his lunch from the chippy. Saveloy and chips. He’d explained to her what a saveloy was and that the ones he bought contained no pork products. He’d told her that
this kind of saveloy had been created for the Jewish immigrants, and was made of beef and cereal.

‘You should try it,’ he said now, ‘with chips. You eat chips. Everybody eats chips.’

She smiled. ‘I’m just not hungry. Maybe another time.’

‘My treat,’ he tried again. She’d lost weight in recent months and Lee was worried. He wanted to ask her if she was alright, but she was a private person and it was difficult. She hadn’t taken any time off work and she was performing well. But the dark circles underneath her eyes bothered him.

He shrugged. ‘OK.’ He put his jacket on and made his way towards the office door. ‘Call me on me mobile if you change your mind.’

He knew she wouldn’t. He ran down the metal stairs leading from the front door of the Arnold Detective Agency and in to a rough back alley behind Green Street, Upton Park. A burst of Greek bouzouki music from George the Barbers heralded his arrival on one of London’s liveliest streets. In spite of his concerns about his assistant, Lee Arnold smiled.

One way or another, Lee had been around Green Street all his life. As a kid he’d come with his mum and his brother to Queens Market for fruit, veg and the odd turn around the junk shops. As an adult he’d walked it to the sound of bangra music, past ornate jewellery emporiums run by Sikhs. He’d broken halal bread with owners of money-exchange agencies, restaurants and mobile phone shops. His favourite pub, the Boleyn, still stood at the far end of Green Street, on the Barking Road, and the chippies still sold saveloys, wallies and his favourite fish, rock eel. Managing to get an office on Green Street when he’d set up in business had been a bonus.

Lee lit a cigarette and began walking south towards the chippy.
He tipped his head at an old white bloke who scowled back. He’d been a fence, and probably still was. When he was a copper, Lee had arrested him twice.

The sky was as grey as a sewer rat’s tail. London weather. It neither thrilled nor depressed Lee, it just was, and in its ‘just was-ness’ it represented comfort. His thoughts drifted back to Mumtaz. Since she’d joined the Arnold Agency, Lee had gradually been given access to a very lucrative market in troubled Asian ladies. Mumtaz helped them pursue errant husbands, looked into the backgrounds of prospective in-laws, and offered them a familiar and at the same time forceful woman with whom they could discuss their problems. Ever since she’d arrived just over a year before, Mumtaz Hakim hadn’t missed a beat.

Lee stamped out his first fag on the ground and lit another. He knew that Mumtaz had financial problems. She was a young widow with a step-daughter and she lived in a house that was too expensive for her. Clearly things hadn’t yet got so bad that she’d had to move because she was still in it, but she wasn’t happy and whatever was causing her misery was making her pale and gaunt. Lee wanted to tackle her outright about it but something held him back, which made him feel impotent and also vaguely guilty. He knew that if Mumtaz had been a white woman he wouldn’t have hesitated to ask her what was wrong.

There was no point going to Lee for more money because he didn’t have any. Mumtaz and Lee had always shared the book keeping and she knew what he did and didn’t have in the bank. The business was prospering but overheads were high and Lee had recently had to update his camera equipment as well as the office computer systems.

Mumtaz looked at her mobile phone and wondered, not for the first time, about calling her father. Her latest payment wasn’t due – yet – but it was only a matter of days away and she was broke. There was just enough food in the house for dinner and Shazia could well have to go in to college with leftovers. She looked hard at her phone again. What would her father say if he knew? What could he do?

She knew that if she told him about her predicament, he would certainly help her with the mortgage. But it wouldn’t be easy for him, he and her mother were old and they needed every penny. No, she couldn’t take money from them. And anyway, even if she did, what would paying the mortgage do on its own?

Her two brothers were also out of the question. They were young men, quick to anger, and if they found out what was really happening to their sister they would be furious. And that, Mumtaz knew, could only end badly – for her brothers.

No. There was only a single realistic course of action and that was the one she had taken the previous month. She extracted a sheet of paper from the office printer and made a list. A lot of her jewellery had already gone and she didn’t want to touch that again for a while. In her head she roamed around her house looking for things she could live without. She wondered whether items like toasters, microwaves and soft furnishings were actually worth selling. Mumtaz baulked at the idea of selling any of Ahmet’s carpets. Her late husband had not been a man of taste – except when it came to carpets. Two Persian and three Afghan remained out of what had once been a considerable collection. Could she bring herself to sell those? If she failed to make the next payment there was more than just an increased rate of interest at stake.

Macrolife by Zebrowski, George;
Literary Love (Lazy Love Book 2) by Kirsten Osbourne
Cowboy's Kiss by Victoria Pade
The Dixie Belle's Guide to Love by Luanne Jones
Slow Surrender by Tan, Cecilia
P.S. I Loathe You by Lisi Harrison
The CEO's Surprise Family by Teresa Carpenter
A Mom for Christmas by Marteeka Karland
Bond Movies 03 - Licence to Kill by John Gardner
Deliver Her: A Novel by Patricia Perry Donovan
Our partner