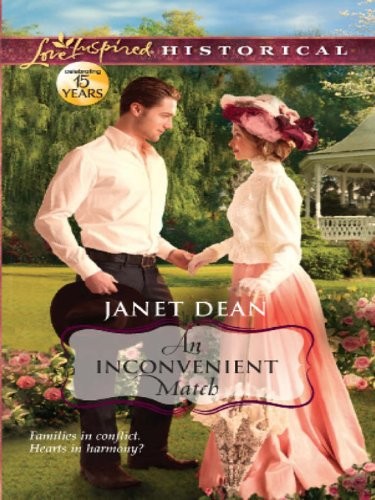 The best of enemies

His family destroyed hers. But Wade Cummings’s job offer—to care for his recuperating father—is impossible to decline. Schoolteacher Abigail Wilson can swallow her pride for the sake of a summer paycheck that will help her sister. And when Abigail’s employment ends, old loyalties will separate the feuding families once more.

If there’s anyone in town stubborn enough to deal with Wade’s cantankerous father, it’s Abigail. It’s just a business arrangement—and a temporary one, at that. Her good opinion shouldn’t matter a lick to Wade. Yet their different backgrounds belie a surprising kinship. Perhaps unexpected love will be their reward for the summer’s inconvenient match.

“My father badmouthed George Cummings at every turn. You do know that hiring me will make your father angry.”

“Sometimes anger is good for a man,” Wade replied.

Abby’s eyes widened, as if she were surprised by his statement, but then she nodded. “Sometimes anger is good for a woman.” She met his gaze boldly, daring him to disagree.

The brief time he’d spent with her today proved she wouldn’t back away from a fight. No doubt sparks would fly between her and his father.

He’d achieved what he’d set out to do. But before he’d gotten the first sense of satisfaction, disquiet took root in his mind. A quick glance at the woman in front of him affirmed the feeling. If he wasn’t careful, Abigail Wilson might ignite something within him. A Wilson and Cummings might be oil and water, but that combination could ignite a blaze.

Had Abby sensed that attraction he felt? Did it alarm her as much as it did him?

grew up in a family that cherished the past and had a strong creative streak. Her father recounted wonderful stories, like his father before him. The tales they told instilled in Janet a love of history and the desire to write. She married her college sweetheart and taught first grade before leaving to rear two daughters. As her daughters grew, they watched
Little House on the Prairie,
reawakening Janet’s love of American history and the stories of strong men and women of faith who built this country. Janet eagerly turned to inspirational historical romance, and she loves spinning stories for Love Inspired Historical. When she isn’t writing, Janet stamps greeting cards, plays golf and bridge, and is never without a book to read. The Deans love to travel and to spend time with family.

2012 is a very special year for us. It marks the fifteenth anniversary of Love Inspired Books. Hard to believe that fifteen years ago, we first began publishing our warm and wonderful inspirational romances.

Throughout the year we’ll be celebrating in several different ways. Look for books by bestselling authors who’ve been writing for us since the beginning, stories by brand-new authors you won’t want to miss, special miniseries in all three lines, reissues of top authors, and much, much more.

This is our way of thanking you for reading Love Inspired books. We know our uplifting stories of hope, faith and love touch your hearts as much as they touch ours.

Join us in celebrating fifteen amazing years of inspirational romance!

To teachers everywhere, those in the classroom and those in the home, who instruct, not only from textbooks, but by word and deed. God bless you.

The Lord is my strength and my shield, my heart trusts in him and I am helped.

O
ne glance at the rogue across the way curled Abigail Wilson’s gloved hands into a stranglehold on her skirts. She couldn’t dispute that Wade Cummings was handsome, rugged—

Her heart stuttered in her chest.
And,
a ladies’ man who took pleasure in toying with a woman’s affections.

Abigail should warn that bevy of giggling young females surrounding him, all vying for his attention. Not that they’d believe falling for the Cummings heir entailed a risk. No doubt each hoped he would bid on her box lunch and spend the afternoon, better yet, a lifetime, plastered to her side. Their plan for the future—a wedding ring.

She’d seen how well that worked out in the best of circumstances, but tied to a Cummings that would be a jail sentence without end.

She turned away from her nemesis and joined the throng pouring into the small park bordering Main Street. Inside the park’s gazebo a table held dozens of gaily wrapped box lunches. She handed hers to Oscar Moore, the fundraiser’s auctioneer.

Donned in his usual garb of a plaid flannel shirt and bib overalls even on this warm Saturday in May, Oscar lined her box up with the others on display, a colorful mix of paper, silk flowers and ribbon.

“I’d give Leon a run for his money and bid on your lunch exceptin’ I make it a point to never come between lovebirds.”

Abigail bit back a grin. Lovebirds hardly described her and Leon.

Up ahead, young people circled a commotion. Abigail rose on her tiptoes. Why, inside that ring, two of her students hunched, clenched hands reared back, ready to strike a blow. Within seconds bystanders took sides, egging them on, as if they needed encouragement. Paul was a hothead, but Seth normally had a level head on his shoulders. What had happened?

Abigail strode toward the ruckus, using her collapsed parasol to clear a path, and pushed her way between the two glowering teenagers. Not wise considering each stood a head taller than her, and outweighed her by a good fifty pounds.

Looking slightly dazed, both boys lowered their arms and took a step back.

Seth Collier, his dark hair curling with perspiration, dropped a sheepish gaze to his feet.

Paul Roger’s face was contorted in anger and as red as his hair, his icy-blue eyes shooting daggers. He reached around Abigail and shoved a palm into Seth’s shoulder. Seth staggered, almost losing his balance.

Abigail slapped her parasol against Paul’s forearm. “Stop that!” Finally both boys turned toward her. “What’s this about?”

“Seth’s going to bid on Betty Jo’s lunch. Everyone knows she’s my girl.”

“Then outbid him. The box social is about raising money.”

Snarling, Paul took a threatening step toward Seth. “No one bids on Betty Jo’s lunch but me.”

“If sharing a meal with another boy will damage your friendship with Betty Jo, then face the truth, Paul, you don’t mean much to her in the first place.”

Betty Jo Weaver, the object of the boys’ hostility, sashayed over, dainty hands planted on hips, lips flattened in a disapproving line. “I wouldn’t share my lunch with either of you blockheads, not for all the tea in China!” She spun away, petticoats and blond curls flying.

“As you can see, gentlemen, the way to a lady’s heart isn’t through your fists.”

“Now look what you’ve gone and done,” Paul groused to Seth then took off at a run. “Betty Jo, wait up!”

With the fight over before it started, bystanders lost interest and dispersed.

Abigail took in Seth’s familiar faded shirt, the elbow she’d patched one afternoon after school. Motherless with a father who drank, the boy didn’t have an easy life.

“You need to watch what you say to Paul. You know his temper.” She smiled to soften her words. “Plenty of other girls would like to share their lunch with you.”

Did he really care about Betty Jo? If so, he was bound to get hurt. Betty Jo Weaver had bigger pickings in mind. Already she’d joined the circle of Wade Cummings’s ardent admirers.

Off to the side, face downcast, Paul stood watching. Young love hurt, she knew, but dismissed the thought and turned away from such silliness.

“Seth, the school board agreed to pay someone to stoke the schoolhouse stove this winter. Would you like the job?”

“It’ll mean getting up early.”

“I know you can. Now have a good time today. And no fighting.”

Seth was a good kid. A bright kid. And weighted down with responsibility. With a father who saw any act of kindness toward him and his son as interference. The best way to help Seth was to get him out from under his father’s influence and into college next year.

One Way or Another by Nikki McWatters
Mystery Of The Sea Horse by Lee Falk
Comfort Food by Kitty Thomas
The Blue (The Complete Novel) by Turkot, Joseph
Make Me Beg for It by Kempe, C. Margery
Sleeping Beauty (Faerie Tale Collection) by James, Jenni
Pieces of Lies by Angela Richardson
Glass Ceilings by Hope, Alicia
Deathstalker by Green, Simon R.
Ghost Town Mystery by Gertrude Chandler Warner
Our partner