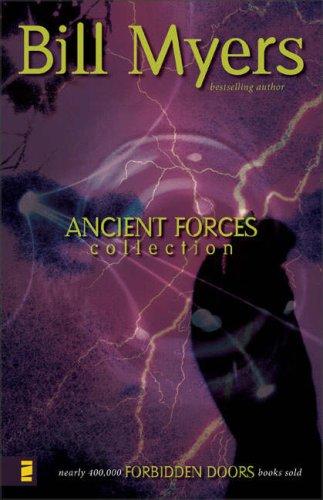 The Ancients
Copyright © 1998 by Bill Myers

The Wiccan
Copyright © 2003 by Bill Myers

The Cards
Copyright © 2003 by Bill Myers

All Scripture quotations, unless otherwise indicated, are taken from the
Holy Bible,
New International Version
®
. NIV
®
. Copyright © 1973, 1978, 1984 by International Bible Society. Used by permission of Zondervan. All rights reserved.

Internet addresses (websites, blogs, etc.) and telephone numbers printed in this book are offered as a resource to you. These are not intended in any way to be or imply an endorsement on the part of Zondervan, nor do we vouch for the content of these sites and numbers for the life of this book.

Read a portion of the first chapter of Dark Power Collection , Volume 1 in the Forbidden Doors Series.

The Spirit clearly says that in later times some will abandon
the faith and follow deceiving spirits and things taught by
demons.

T
he eagle soared through the clear blue sky. Sleek and beautiful, it rose higher and higher. Suddenly it dipped and dived, screaming through the air like a jet fighter.

Rebecca Williams watched in delight as the wonderful creature swooped low toward the ground. Then, at the last second, it pulled up and sailed high into the sky in a graceful arc.

And what a sky. Becka’s delight changed to wonder as she saw that the sky had taken on a dark, purplish hue. But what really mesmerized her was the weird geometric pattern covering the sky: lines, triangles, and squares swirled in a concentric pattern that made them impossible to distinguish from one another. And yet the pattern was strong and focused, making an instant imprint on her mind.

The eagle’s harsh cry rang out across the horizon, distracting Becka from the pattern in the sky.

She turned and saw Ryan’s mouth open. He lifted his hand to protect his face. He began to scream, but it was too late. The sharp, leathery talons slashed at his neck and —

“Noooo!” Becka woke up with a start. Sweat dampened her face, and her breath came in gasps.

Before she could get her bearings she heard, “Will you stop all that whimpering?”

She spun around to see Scott, her younger brother. She was about to yell at him for being in her room when she
realized that she wasn’t in her room at all. In fact, she wasn’t even in her house. She had been napping on a plane.

A plane heading for New Mexico.

“Honey, are you all right?” Mom looked at her from the seat next to Scott’s, her face showing concern.

“Must have been pretty weird,” Scott said. “You were making all kinds of noise.”

“It was an eagle,” Becka explained. “A huge one. It flew right at me and then wound up attacking Ryan.”

Scott held her gaze a moment. There was no missing the trace of concern in his eyes. This had happened before. Her dreams. Usually they had something to do with an upcoming adventure. Finally, he shrugged. “You’re just worried about the trip.”

He glanced back at her. “Just what?”

“This whole assignment.” She hesitated, then continued, “Doesn’t it seem a little stranger than the others?”

Scott gave a half smirk. “Stranger than fighting voodoo in Louisiana?”

“Or tracking down make-believe vampires in Transylvania? Or facing down demons in Los Angeles?”

Becka took a deep breath. Okay, so he had a point. Life had become pretty incredible. Still . . .

“What are you guys talking about?” It was Ryan, Becka’s sort-of boyfriend. He had turned around from the seat ahead of them and was grinning.

Becka felt a wave of relief. She knew she’d been dreaming, but it was still good to see him and know he was all right. Come to think of it, it was always good to see Ryan Riordan. If not because of their special friendship, then because of the gentle warmth she always felt inside when they were together.

“We were talking about this trip,” Scott said. “Becka’s afraid this one is stranger than the others.”

Ryan’s smile faded. “What makes you say that?”

“At least we get to stay in a fancy hotel again,” Scott said. “What’s it called? The Western Ground on the Cliff?” He leaned back, folding his hands behind his head. “Sounds pretty hoitytoity to me. Like one of those expensive, something-on-the-something hotels in Beverly Hills.”

“I’m just glad to be going this time,” Ryan said. “I went crazy when you guys were in L.A.”

Becka was glad he was with them too.

“Well, Becka’s right about one thing,” Scott admitted. “Something’s definitely up. Z never sends us out on boring assignments, that’s for sure.”

Becka and Ryan both nodded in agreement. Z was their friend from the Internet. He’d sent them to help people all over the world. And yet, to this day, Scott and Becka had no idea who Z really was. Not that they hadn’t tried to find out . . . but somehow, someway, their attempts had always met with failure. Z’s identity remained a mystery.

“Actually,” Ryan said with a grin, “I’m pretty excited to be visiting an Indian tribe. I mean, I’ve always liked reading about Native American culture. I think they’re a noble people who got a raw deal.”

Rebecca nodded. “Taking their land was a wrong that we’ll never fully repay. Kinda like slavery. And you’re right about their culture. They’ve got a real respect for nature.”

“I suppose,” Scott said. “But aren’t some tribes really involved in weird spiritual stuff? You know, like shamanism and séances and visions?”

Ryan nodded slowly. “But some of that is in the Bible.”

“So they must have some truth to them.”

“There’s some truth in everything,” Scott countered. “That’s the devil’s favorite trick . . . a little truth, a lotta lie.”

Before Ryan could answer, Becka called out, “Wow! Look down at that canyon!”

Mom and Scott crowded in close to her so they could see out the window. There below them lay a beautiful canyon, its cliff walls shimmering red, yellow, and purple in the sunset.

The captain’s voice sounded over the loudspeaker. “Well, folks, we’re beginning our descent into Albuquerque. Please fasten your seat belts. We should be on the ground in just a few minutes.”