And It Arose from the Deepest Black (John Black Book 2) 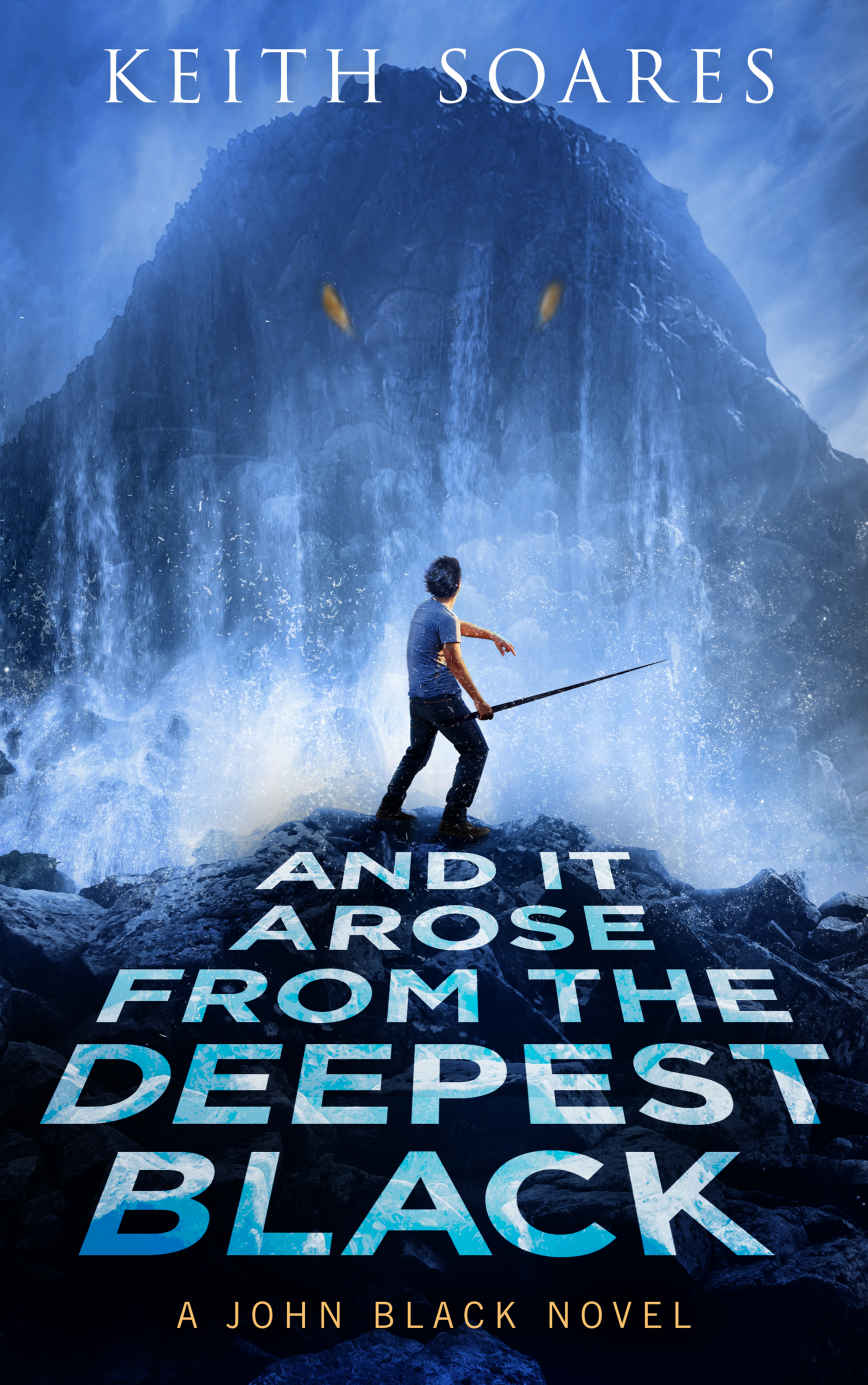 And It Arose From the Deepest Black

Special thanks to Yasmin, who begged to be the first reader of this novel.

The Oasis of Filth

Part 1 - The Oasis of Filth

For I Could Lift My Finger and Black Out the Sun

And It Arose From the Deepest Black

In the Black Veins of the Earth
(forthcoming)

The Fingers of the Colossus
(Ten Short Stories)

Get release news and free books,

including private giveaways and preview chapters.

PLEASE CONSIDER leaving a review where you purchased this book. Unfortunately, a star rating alone will not show up on most bookseller websites, so please take a moment to write just a sentence or two describing your feedback. As an independent author, I cannot thank you enough for your time doing this!

A grizzled, sea-weathered man named Mac — I’ve never heard him called anything else, or even learned his last name — was the first human ever to lay eyes on an alien from outer space.

Well, unless you count me.

It was possible, even likely, that the thorns inside my body were alien, although I had no way to really prove it. But that’s not my point.

I saw them first. Me and Holly. We just had no idea what we were looking at.

But Mac, he knew. I mean, how could he not? What he saw was definitely not from Earth. I never met Mac, but I saw him countless times on TV, recounting his story, usually standing on a dock somewhere, often wearing black all-weather gear. He was a squat, greying man, not old, but definitely not young. He had a thickness to his body that spoke of a hard life on the water, and skin that looked boiled and tough as leather. As his story went, he was alone, fishing the deep and frigid waters off the northwest coast, when a thick layer of fog rolled in to surround him. Like most people in that part of the world, he seemed to accept the possibility of his gruesome death in stride. If he was socked in — that’s what they call it when the fog is so thick you can’t see a thing in any direction — he’d be lucky to find his way back. Even if he located the shore and hugged it as he headed home, hitting an errant rock could mean the end. And it wasn’t like he could swim to shore in water that hovered just below freezing. Yes, that’s actually possible; I looked it up. It’s called supercooling, and I can tell you, if I thought I might freeze to death in water like that, I would find it neither
super
nor
cool
.

Anyway, like I said, Mac didn’t seem to care. Every time I saw him tell his story, he skimmed over that part, like it was all in a normal day. Yet, I found his whole lifestyle to be so strange. An experience so alien to me that I thought maybe we really didn’t need to go to outer space to find something out of this world. And so, of course, we truly didn’t.

The water in that area ran cold, dark, and deep, and with the fog enclosing him, Mac said, it seemed like the setting sun itself had been blacked out. Like night came early and blindness set in. He couldn’t see more than 50 feet in any direction. He was alone, in 300 feet of ice water, with near-zero visibility, and night was coming.

Still, none of that worried him.

It was the
swell
.

Mac had been fishing those waters for decades, had bumped into pretty much anything there was to bump into, sometimes literally. Nothing surprised him. Except this.

He heard a deep, low sound, seeming to come from everywhere at once. I remember him saying it didn’t sound natural, and that was why it got his attention. Surrounded by so much nature, I guess you don’t expect to find something unnatural. Then the ocean itself heaved upward. Not a wave, not the tide. Just the area around his boat. Like an immense bubble rising. His boat was carried upward.

Mac was, reasonably, surprised. He looked into the rising water and saw two lights. He described their color as nearly orange, but sometimes seeming to waver between deep red and amber. At first, he told reporters, he thought a ship had gone down. Maybe the swelling water was a belch of gas escaping the hold, the lights indicating the last flicker of a dead vessel. He knew there wouldn’t be any hope of survival. Any human under that water was dead, for sure. He stared at the lights, and he said it made him sad, thinking of the sailors who were probably down there. The ones who had met their doom.

But the swell kept rising, and strangely, it seemed like the lights were coming up as well.
This is bad
, Mac thought. Finally, right? I mean, I would have thought that in the very beginning, possibly as soon as I boarded the boat, before anything at all happened. But Mac said he only thought that when he noticed the lights were rising toward him. He assumed a sunken boat was bubbling to the surface for one last hurrah, and his concern was that he was in the way. If his boat got tangled with the other one, he might soon meet his own watery grave.

Mac rushed to the wheelhouse and twisted the key to start his inboard engine. He never really described his boat in anything I’d heard. Maybe to him, it was so commonplace that it’d be like describing his own face. Maybe it simply was. Nevertheless, TV news shows can’t help but make graphics and 3D visualizations. So I kinda feel like I was there that day, given how I saw it from every angle.

His boat was maybe 30 feet long, metal-hulled, with a smallish wheelhouse toward the middle. To one side of the wheelhouse, there was an entry to the hold below, where he could store his catch. I don’t know if the hold was empty or not on this particular day. I guess it doesn’t matter. Mac got the engine running and dropped it into gear. He said he started to putter forward, which made him feel better by diminishing his chances of being hit by the rising boat, but also gave him a new concern: He was moving off the center of the swell, which was like sliding downhill. His boat picked up speed fast, and he lost control. For a time, he stopped watching the rising lights and held on for dear life as his boat slipped off the swell and splashed down into calmer, flatter waters. He bobbed and swayed, not knowing if he would be flung overboard to his death. Again, he didn’t seem all that concerned when telling this part of the story. Mac was a strange fellow.

The slide also spun his boat around, so suddenly Mac’s engine was pushing him back toward the swell, which wasn’t ideal. He dropped to neutral, then to reverse, trying to back away, his eyes once again locked on the rising lights.

Until they stopped moving.

Mac described the lights as enormous, separated by maybe 20 feet. Each light was the size of a car. The two lights floated just under the surface of the water, and Mac tried to make sense of what they were, what part of a boat had lights like that. No, he tried to figure out what
kind
of boat had lights like that. Then the water fell away. The swell remained, but the water slipped off it, and the complete
strangeness
of what he was seeing finally broke through. Mac said he simply couldn’t put the dots together to understand what he was seeing. It made no sense to him at all.

Unable to comprehend what his eyes were showing him, Mac decided to talk it through to himself.
What am I looking at?

Here, almost all of the interviews sound the same, with Mac reciting some internal monologue.

A mountain in the water. Curved. Bigger than the boat. It’s bumpy, rough. Are those rocks? No, I don’t think so. Not rocks, just bumps. A low sound, deep and weird. I can’t tell where it’s coming from. The boat is vibrating. The mountain is black, so dark it’s hard to make out anything. But the lights. Big and round, glowing. Like they’re alive. Like they’re looking at me.

Mac’s lead-in varies a little bit from interview to interview, but the ending is always the same. After he says the lights seemed to be looking at him, Mac always pauses, straightens his back, opens his eyes wide, and says the same thing.

Hunger Aroused by Dee Carney
Uncle Al Capone by Deirdre Marie Capone
The Amish Bride by Mindy Starns Clark, Leslie Gould
Teacher's Pet by C. E. Starkweather
Why Are We at War? by Norman Mailer
I Don't Want To Kill You by Dan Wells
Family Case of Murder by Vanessa Gray Bartal
Horrible Harry Goes to Sea by Suzy Kline
His Vampyrrhic Bride by Simon Clark
Judy's Journey by Lois Lenski
Our partner