Read Angel In My Bed Online

Angel In My Bed 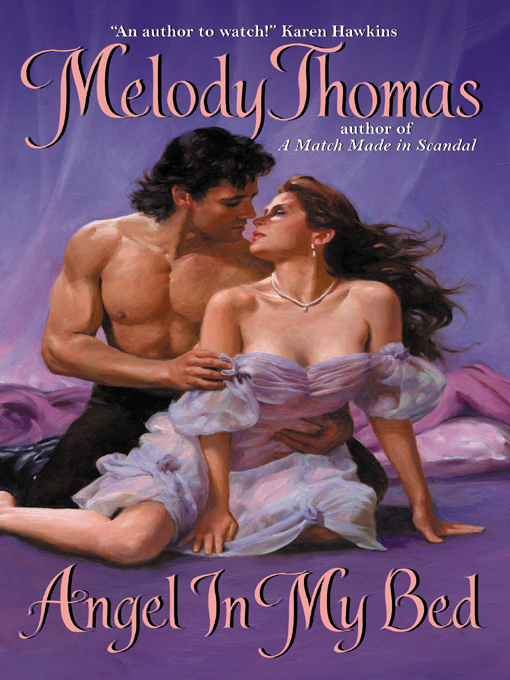 Melody Thomas
Angel In My Bed

For my wonderful mother, Faye Joann.

On a gust of biting wind, David Donally walked intoâ¦

“It is freezing out here.”

Leading the steeldust mare up the hill, Victoria took aâ¦

David danced through the master's wheel with the same precisionâ¦

Victoria stood in David's dressing room, grateful for the heartyâ¦

David stood aside, allowing Meg to pass into the corridorâ¦

David reined in his horse at the top of theâ¦

“He's been out there most of the evening, mistress,” Doyleâ¦

“Peepaw says I should wear spectacles in places of poorâ¦

“I'll fetch His Lordship at once, mum.” David's stoic butlerâ¦

Victoria struggled to push herself up on her hands, raisingâ¦

When David stepped into Meg's room, he knew immediately thatâ¦

David reined in Old Boy just past the cemetery, peeringâ¦

“On your guard, Donally!”

As twilight settled over the hills, David reined in Oldâ¦

A fire burned in the hearth. Victoria lay in bed,â¦

An image of a buxom mermaid swung from a signâ¦

Victoria arrived upstairs from the servants' entrance. Gripping the edgeâ¦

“Did you or did you not go to the townâ¦

“Get away from me!” Victoria pressed her palms against hisâ¦

Victoria stumbled as her father pulled her beneath a tree.

The carriage stopped near an isolated cemetery. Victoria looked outâ¦

Victoria came awake with a gasp to uncertain darkness. Cocoonedâ¦

O
n a gust of biting wind, David Donally walked into the Wild Boar Tavern, his cloak swirling about his calves, a whisper of dead leaves trailing in his wake. The frigid weather was as volatile as his mood as he remained like a shadow in the arched doorway of the common room. His towering height gave him the advantage, and he surveyed the length of the room filled with smoke from a roasting pig sizzling over the open stone hearth. He felt the eyes of the patrons this night and let them look their fill, knowing most contemplated what wealth he carried on his person.

His sweeping cloak concealed his black trousers, shirt, and riding boots. A full cowl covered his head and face, his beard all that the eye could distinguish of his features. A cynical smile shifted the line of his mouth as his gaze moved
over a room rumored to cater to murderers, smugglers, and thieves. A stiletto braced his calf inside one boot, a cutlass at his side, his weaponry no more than an extension of his own dangerous temper.

Tonight, he was the hunter.

And hunt he would.

“What be yer pleasure, guv'nor.” A pale-haired whore slid one fingernail across his beard before he wrapped his black-gloved hand around her delicate-boned wrist. Her once pretty mouth slipping into a pout, she sidled against him. “I'll be whatever pleases ye tonight.”

“Point me to Stillings,” he spoke, making his disregard of her obvious as he returned his attention to the crowd. “I believe he is here.”

“You've come to trade, 'ave ye?” She tossed her thick hair, for his dark eyes had fallen on her again. This time he let them linger. Caution seemed to replace some of the fire in her eyes. Nodding toward the man sitting in the corner watching David, she shrugged. “'As soon throw ye in the river as trade anything ye got to offer.”

David smiled crookedly from the shadow of his cowl and, pressing a half crown in her palm, leaned nearer to her ear. “I'll take that as a much-appreciated warning,” he said with a hint of Irish in his voice.

She gazed up at him with the bluest of eyes. “In case ye be needin' a quick exit there's a door down that corridor.”

Surveying the darkened hallway, he nodded. She squealed as someone behind her wrapped an arm around her hips and pulled her to a nearby table. David watched as two men fought over her. He began pressing through the unwashed bodies toward the back wall. The smell permeated every breath that filled his lungs. Disgust made him grimace. He
had come to this tidewater town on the shores of the Cuckmere River for one purpose, and he was as unimpressed by the bloated show of force among the locals as he was by the depravity of their nocturnal habits.

Sipping froth from his ale, Stillings watched his approach like a military man who sensed a new enemy at his gates. Stillings wore a sleeveless leather vest over a blue woolen shirt unbuttoned at the throat. But for the narrowed eyes that took his measure, any naÃ¯ve fool might have considered the man's face friendly enough.

David came to a stop next to the table, blocking the light behind him, his height forcing the man's chin up. “Stillings, I presume?” He didn't extend his hand.

Shoving the toe of an expensive boot against the man sitting at the table with him, Stillings snapped, “Off with you, Franks. Can't you see we have a distinguished guest in our midst?”

David accepted the proffered chair and sat with his back against the planked wall.

“I'm the sheriff,” Stillings said, leaning forward on his elbows. “Appointed by the most noble Nellis Munro himself, magistrate and protector of these humble shores. He owns most of the land in these parts. Or is about to.” With a flick of his hand, Stillings brought a harried barmaid to the table. “Your pleasure, guv'nor.”

It would please him to bathe the stench of this place from his clothes. David softened his next statement with a smile. “I believe we have business to attend. The sooner we finish, the sooner I can attend to my own pleasures.”

“Naturally,” Stillings complied, sending off the girl. “But a man like you wouldn't last five minutes in this town.”

His slow grin affable, David took note of Stillings's men moving around the room. Though David kept his face void of
expression, he had the distinct impression that the sheriff expected him to be afraid. “Why is that?”

“Because it's a dangerous place for outsiders,” the man challenged with an air of amusement.

Only one thing had brought David out of retirement, out of seclusion, and back to England.

He slid a red velvet pouch from within his cloak. Drawing open the string, he dumped the trinket onto the table. A bloodred ruby and diamond earring rolled into the sphere of golden candlelight. Light glinted from the brilliant stones, an open invitation for every greedy eye in the room to stare.

“I've traced this earring back to here,” David said. “I'm willing to pay a handsome sum for the necklace that matches this bauble.”

“Forgive me.” Stillings scratched at his chin. “Where did you say you were from?”

“The pawnbroker who had this earring directed me here.” David leaned away from the candlelight, the hilt of a stiletto in his glove. “Claimed to do business from around Alfriston. Said if anyone would know about the bauble's previous owner, that man would be you.”

“Did he now?” The sheriff folded his massive arms over his chest. “Why would I know such information?”

“You are the sheriff. He must have presumed that you knew everyone in this area. This particular earring came from an unsolved theft in India some years ago.”

“India?” Stillings regarded David with a hint of new interest in his brown eyes. “I'm not saying I know there is a necklace that belongs to this bauble,” he clarified, lest David construe his obvious greed for anything except what it was. “But I am wondering how you would know of such a necklace's existence, if ye don't mind me asking?”

“Truly, Sheriff.” He used the title loosely. “What difference can it make how I know? I'm willing to pay for the object in question. A thousand pounds to be exact,” he said, knowing many a man would sell his own family for that kind of wealth. “The people I work for are willing to offer a cut of the profit to any man who will help locate the necklace.”

In truth, the necklace was considered pricelessâpart of a decade-old theft of artifacts stolen from the Calcutta royal treasury. A theft that had cost him the life of a friend and his very soul. No one knew why a single earring had turned up after all these years. Nine years ago, the stolen cache was believed to have been on board a steamer that went down off the coast of Bombay, along with everyone on board.

“A theft ye say?” The big man rubbed a finger across his clean shaven chin. “Maybe it's not the necklace you're after. Maybe you are a thief after a thief who has something more that you want,” he said, before finally surrendering his full attention to the ruby and diamond earring glittering on the table. “If that earring is any clue to the value of the necklace, methinks it is worth more than you say.” Stillings reached out a gloved hand to claim the earring.

David slammed the stiletto into the trestle table just in front of his grasp, startling the man's hand back. “This earring belongs to me, Sheriff.”

Stillings's eyes narrowed as if he had made a mistake in dismissing David as no threat. “Do you question my authority to pursue this as a legal matter?”

“Come, Stillings.” His tone and smile belied the odds of his capture. “You do not mean to take what belongs to me. I've offered to pay well for the information I seek.”

A confident smirk lifted one corner of Stillings's mouth as he stood. “I can see we have a problem.”

“Then we have something in common.”

“Seize him!” the sheriff shouted.

David reached beneath the table and, with both hands, heaved it over. Mugs, plates, and silverware spilled over the planked floor, splattering food and ale over unsuspecting patrons. In the same motion, he sprang to his feet and leaped atop a second table. Tossing out a handful of coins, he threw back his cloak and swung around, revealing the sword at his side.

Men and barmaids dove for the shillings in a clash of screams, teeth, and flailing limbs. A call rang out. “Don't let him escape, you fools!”

David leaped to another tabletop and strode its length, his boots scattering trenchers and mugs. Shouts ensued as more men joined in the fray. Glass shattered, a bench overturned. David stepped onto another table, turning to check the sheriff's progress, and saw him fighting through the tangle of limbs, barely missing a collision with a punch as he scrambled to recover the earring David had left him on the table.

His cowl billowing around his shoulders, David dropped onto a bench before touching his boots to the floor and striding out the door into the black chill of a bright moonlit night.