Ant Farm: And Other Desperate Situations 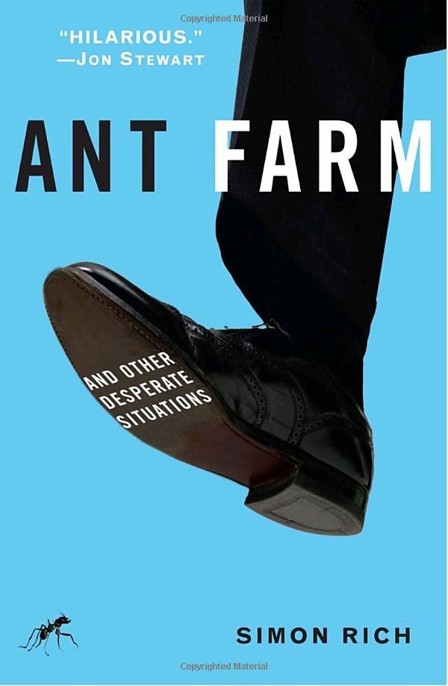 the ride back to beersheba

i still remember the day i got my first calculator

our thoughts are with you

a fantasy i had in seventh grade

“may or may not contain peanuts”

patron of the arts

when the “guess your weight” guy from the carnival got married

my roommate is really hard to get along with

where are all the time travelers?

glorious battles of the american revolution

a day in the life of the swiss army

how i imagine life in the u.s. army (based on the commercials i’ve seen)

how did all those fun army chants get started?

Then Abraham tied Isaac up and laid him on the altar over the wood. And Abraham took the knife and lifted it up to kill his son as a sacrifice to the LORD. At that moment the angel of the LORD shouted to him from heaven, “Abraham! Lay down the knife.” … Then they returned to Beersheba
.

the ride back to beersheba

Wow, there is nothing like camping! Cooking your own lamb, building your own pyre… and no women! Just a couple of guys in the woods, lighting fires, doing stuff, and keeping it between themselves! Speaking of which, did you ever notice how your mother sometimes gets ideas? I mean, she raised you and I love her, but she’s a very nervous person. All I’m saying is sometimes it’s all right not to tell her about certain things. Like
guy
things.

Wow, I just noticed that you have
huge
muscles! You’re really getting strong! When did you get so big and strong? Soon you’ll be a real strong guy!

Let me explain something to you. Sometimes, grown-ups
have to do grown-up stuff that children don’t understand. I think there’s an ice cream place coming up. Like, what happened on top of the mountain? Do you remember? Of course you … of course. Anyway, that was a thing for grown-ups.

How about some Rocky Road? Chocolate? I’d get you some strawberry, but hey, your name’s Isaac, not Isaac-Marie—am I right? Ha! Seriously, though, if you want strawberry I’ll get it for you. I’ll get you whatever you want.

So, anyway, let’s rehearse. I’ll be your mother. “Isaac, how was your trip to the mountain?” Okay, then you would say something like “Pretty normal.” That’s not too hard, right?

We’re almost home. Listen, I probably shouldn’t be telling you this, but your mother is very sick. She’s sick, Isaac. And the slightest shock might kill her. Hey, there she is, waving at us!
Hi, Sarah, we’re back!
Put a couple lambs on the spit—you’ve got a couple hungry
lumberjacks
on your hands! Ha, ha! She’s very ill, Isaac. Very ill. Wow!
… Camping
.

MOM
: Pass the wine, please. I want to become crazy.

GRANDMOTHER
: Did you see the politics? It made me angry.

MOM
: Let’s talk about which kid I like the best.

MOM
: If they ask me again, I might tell.

FRIEND FROM WORK
: Hey, guess what? My voice is pretty loud!

DAD
: (laughing) There are actual monsters in the world, but when my kids ask I pretend like there aren’t.

DAD
: I’m angry too! We’re angry at each other!

MOM
: Now everything is fine.

GRANDFATHER
: Hey, do you guys know what God looks like?

—Jake, come over here for a second. I need to talk to you about something.

—This is going to sound a little crazy. Oh well … here goes. Do you remember when we were on the school bus last week and Ms. Higgins taught us that new game?

—You mean the Silent Game? Yeah, I remember. It was pretty cool of her to let us play games on the bus, huh?

—Well, yeah, that’s what I thought at first. But then I started thinking about it. And now I’m not so sure.

—What do you mean?

—Well, just think about it. The Silent Game isn’t
actually
fun. We don’t do anything—we just kind of sit there. And nobody ever wins. It’s always a tie.

—What are you saying?

—I don’t think it’s a real game. I think she just made it up to get us to be quiet.

—I can’t believe we fell for it. We were silent for almost twenty minutes!

—We have to tell the class!

—What about all the other games she taught us? The Politeness Game … the Respect Game … the Clean Up the Tables Game …

—Whoa. You just blew my mind.

—This has got to be the craziest day of my life.

[UNICEF sits on a throne. He is wearing a cape and
holding a scepter. A servant enters, on his knees.]

UNICEF
: Halloween is fast approaching! Have the third graders been given their little orange boxes?

UNICEF
: Perfect. Did you tell them what the money was for?

SERVANT
: No, sir, of course not! We just gave them the boxes and told them to collect for
UNICEF
. We said it was for “a good cause,” but we didn’t get any more specific than that.

UNICEF
: Ha ha ha! Those fools! Soon I will have all the money in the world. For I am
UNICEF
,
evil king of Halloween!

SERVANT
: Sir … don’t you think you’ve stolen enough
from the children? Maybe you should let them keep the money this year?

UNICEF
: Never! The children shall toil forever to serve my greed!

[UNICEF tears open a little orange box and rubs the
coins all over his fat stomach.]

SERVANT
: Wait—your majesty! Look at this! Our records indicate that there’s a kid out there—Simon—who’s planning to
keep
his UNICEF money this year.

UNICEF
: What?!? But what about my evil plans? I was going to give that money to the Russians so they could build a bomb!

SERVANT
: I guess there’s still one hero left in this world.

[Runs out of castle, sobbing.]

THIRD SERVANT
: I agree. Simon is doing a good thing by keeping the money from the
UNICEF
box.

SERVANT
: Then we’re all in agreement. Simon should keep the money.

TEACHER
: All right, children, welcome to fourth grade math. Everybody take a calculator out of the bin.

ME
: What are these?

TEACHER
: From now on we’ll be using calculators.

ME
: What do these things do?

ME
: You mean this device just … does them? By itself?

TEACHER
: Yes. You enter in the problem and press equal.

ME
: You … you knew about this machine all along, didn’t you? This whole time, while we were going through this … this
charade
with the pencils and the line paper and
the stupid multiplication tables!
… I’m sorry for shouting … It’s just … I’m a little blown away.

TEACHER
: Okay, everyone, today we’re going to go over some word problems.

ME
: What the hell else do you have back there? A magical pen that writes book reports by itself? Some kind of automatic social studies worksheet that … that fills itself out? What the hell is going on?

TEACHER
: If a farmer farms five acres of land a day—

ME
: So that’s it, then. The past three years have been a total farce. All this time I’ve been thinking, “Well, this is pretty hard and frustrating but I guess these are useful skills to have.” Meanwhile, there was a whole bin of these things in your desk. We could have jumped straight to graphing. Unless, of course, there’s some kind of graphing calculator!

TEACHER
: There is. You get one in ninth grade.

In order to make sure no child gets hurt this year, the PTA has agreed to the following guidelines for birthday parties:

1. If a child invites more than half of the class, he must invite the entire class, including Ivan.

2. If a child only wants to invite a few best friends but Ivan hears that there’s a party, that child must invite Ivan and pretend that the party is for Ivan.

3. If Ivan is at a party and he starts to have one of his fits, everyone else at the party (including parents) must pretend to have fits also so Ivan doesn’t feel that he’s the only one having a fit. When Ivan runs out of steam, nobody should talk about what just happened.