Read Anyone Can Die Online 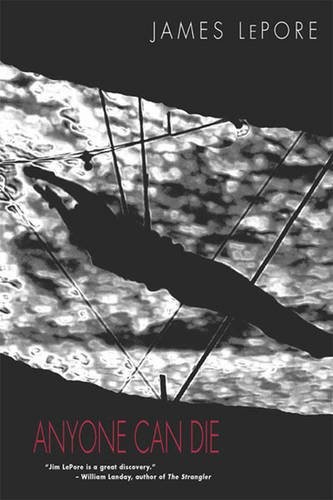 Five days later, they were in their rented car, Pat at the wheel, headed north on Route 522 in northern New Mexico’s high desert, looking for a bar called Elmo’s, where they would turn to head down into the Rio Grande Gorge to a hot spring they had been told about on the river. They had gone from Reno, where they were married, down into New Mexico at the Four Corners and then back to Nevada to tour the Hoover Dam and hike in the Grand Canyon. New Mexico had lured them back. Not for nothing was it called the “Land of Enchantment.” Yesterday they had hiked up Atalaya Mountain, outside Santa Fe, and made love at 9,000 feet. At breakfast they had heard about the hot spring up near Pilar and decided to pack a lunch and make a day of it, free and easy like any near-penniless, naïve young couple would be on their low-end honeymoon.
Except that Pat was not completely free and easy. He could not believe his luck in landing Lorrie, and worried that it would not last once she realized that, though he could throw a killer punch and move the earth and build things, big dumb Irishman that he was, he did not know the first thing about loving someone or being a husband. And, now that they had made love twenty times or so—he was insatiable, which so far she didn’t seem to mind—there was something new. He could not entirely repress his feeling that their use of condoms—most of the time—was a mortal sin. He had thought he had shed his parents’ Irish Catholic guilt years ago, along with stopping going to mass and confession and all that hoopla as he
called it. But he was now learning the lesson, as everyone does, that theory was one thing, practice another. And neither, Pat was learning, was Lorrie all that naïve. She had definitely been a virgin, but how then did she know so much about making love, about how to please him?
“You’re not telling me something, Paddy,” Lorrie said.
“Huh?” Pat replied, his reverie abruptly broken.
“Something’s on your mind.”
There it is again, Pat thought, she knows things. I can’t anticipate it, and I can’t fake her out once she throws that first pitch.
“You’ve been brooding,” Lorrie said. “You’re too serious, I keep telling you that. I’m not smart, but together we can be.”
Pat looked over at his wife, who looked back at him, her head slightly down, as if to say, stick with me, big guy, I’ll navigate. I’ll get us there.
“Is it the sex?” Lorrie asked. “It’s not a sin. We’re married.”
“Come on, Lorrie.”
“Then what is it? You think I’m a brazen hussy?”
“I’ve actually heard that before.” Pat smiled as he said this, as did Lorrie. After dating for a few weeks she had told him that she had decided that she would be trying out lots of words and phrases on him that he may not have heard before, as, she had said, he was such a tabula rasa: a big, dark-eyed, incredibly handsome, muscular, sexy, blank slate. He had not been
offended—so madly in love was he, and so obviously affectionate was her teasing.
“The Jesuits again?” she asked.
“I don’t remember.”
“Your prior girlfriends, whom you’re supposed to have totally forgotten by now?”
“Possibly.”
They both stared ahead for a moment, their eyes on the empty two-lane highway that was now cutting through a vast, flat Indian reservation, their compact car chugging along at a steady 55 miles per hour.
“What is it, Pat?” Lorrie asked after this moment passed.
“I’ve been offered a job.”
“It must not be your average, run-of-the-mill type of job.”
“No, it’s not.”
“What is it?”
“Operating a dozer in Paraguay. They’re building a dam.”
“Paraguay!” Lorrie said.
Pat snuck a look at his wife, confirmed that she was, for once, dumbfounded, then quickly returned his eyes to the road.
“Jimmy King,” he said, “is putting a crew together. The pay is unbelievable.”
“How much?”
“A thousand a week.”
“A thousand a week!”
Dumbfounded again.
“Plus a place to live.”
“What did you say?”
“I said I would think about it.”
“You should have said you had to talk to me.”
Shit, Pat thought. I can’t win.
“That’s what I meant,” he said.
“When do you have to tell him?”
“When we get back.”
“When does it start?”
“September.”
“Are wives invited?”
“Yes,” Pat replied, lying, and immediately feeling guilty. He didn’t know if wives were invited. He hadn’t asked. Jimmy King—Pat’s boss, a boxing fanatic and the owner of King Excavation—had mentioned the roughness of the jungle site, where they would be moving the Paraná River, creating a new mile-long channel where the dam would be located. Pat didn’t know which he loved more, the idea of moving the Paraná River, or his new wife. He literally did not know that he did not know this. It was not a question he would think to ask himself until later, when it was too late.
“We have to discuss it,” Lorrie said.
“Of course,” Pat replied. “It’s a big move,” thinking: please God, let her say yes.
“There’s Elmo’s,” said Lorrie, pointing to a building ahead on the left. “Let’s stop and get beer.”