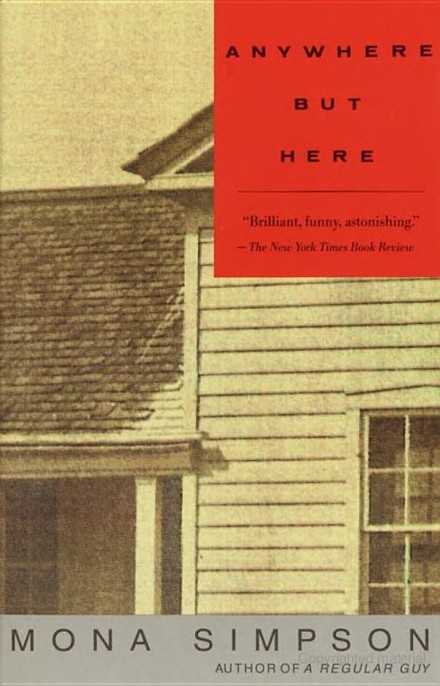 “Mona Simpson is both a novelist and a poet, and her talents are prodigious.”

“Mona Simpson has a remarkable gift for transforming the homely cadences of plain American speech into something like poetry … a stunning debut.”

“A raw, amazing, heart-breaking portrayal of a sort that hasn’t turned up in anything else I’ve read.”

“Simpson has already earned a place beside domestic pioneers like Anne Tyler and Alice Munro. She has not only shaken the family tree, she has plucked it from its soil to expose its tangled system of roots.”

“Anywhere But Here
is a family affair made real, a journey into the tortured heart of the American Dream. Simpsons novel is an evocative portrait of a mother who is the lonely, hapless monster in all of us, mistaking fame for success, bondage for love, and the daughter who rejects her, becomes her, loves her, survives her.”

“It has all the bite and poignance of a life unfolding … a moving, extraordinary achievement.”

“There have been many novels about mothers and daughters … but Simpson has found a very special, achingly real, yet often funny way of portraying such a relationship that speaks directly to our times…. We are in the presence of a major new literary talent.”

“A brilliant novel…
Anywhere But Here
is a book about two women, but Simpson makes them seem like the world.”

“The voices in
Anywhere But Here
have beauty, vitality, and sadness. They tell of arrivals and departures in reminding, confiding tones that Mona Simpson owns entirely. This book is necessary.”

“Crafted with the assurance and virtuosity of a seasoned storyteller.”

“Simpson’s prose is at once effortlessly casual in tone and also an instrument of genuine subtlety…. Her novel takes your breath away.”

Anywhere But Here
The Lost Father

All rights reserved under International and Pan-American Copyright Conventions. Published in the United States by Random House, Inc., New York, and simultaneously in Canada by Random House of Canada Limited, Toronto. Originally published, in hardcover, by Alfred A. Knopf, Inc., in 1986.

The author wishes to thank the Corporation of Yaddo, the MacDowell Colony, VCCA, the Transatlantic Henfield Foundation, The Beard’s Fund, the Kellogg Foundation, and
The Paris Review
for their support during the writing of this book. Also, the author would like to thank Allan Gurganus, Elizabeth Hardwick, Robert Asahina, Robert Cohen, Lionel Shriver, and George Plimpton for multiple and generous readings.

For Joanne
,
our mother
,
and
my brother Steve

3   The House on Carriage Court

7   A Shopping Center Somewhere in the Valley

12   A Backhouse on North Palm Drive

17   The Course of Miracles

There are three wants which can never be satisfied; that of the rich wanting more, that of the sick, wanting something different, and that of the traveler, who says, “anywhere but here.”

W
e fought. When my mother and I crossed state lines in the stolen car, I’d sit against the window and wouldn’t talk. I wouldn’t even look at her. The fights came when I thought she broke a promise. She said there’d be an Indian reservation. She said that we’d see buffalo in Texas. My mother said a lot of things. We were driving from Bay City, Wisconsin, to California, so I could be a child star while I was still a child.

But I wouldn’t. I knew how to make her suffer. I was mad. I was mad about a lot of things. Places she said would be there, weren’t. We were running away from family. We’d left home.

Then my mother would pull to the side of the road and reach over and open my door.

I got out. It was always a shock the first minute because nothing outside was bad. The fields were bright. It never happened on a bad day. The western sky went on forever, there were a few clouds. A warm breeze came up and tangled around my legs. The road was dull as a nickel. I stood there at first amazed that there was nothing horrible in the landscape.

But then the wheels of the familiar white Continental turned, a spit of gravel hit my shoes and my mother’s car drove away. When it was nothing but a dot in the distance, I started to cry.

I’d look at everything around me. In yellow fields, the tops of weeds bent under visible waves of wind. There was a high steady note of insects screaking. A rich odor of hay mixed with the heady smell of gasoline. Two or three times, a car rumbled by, shaking the ground. Dry weeds by the side of the road seemed almost transparent in the even sun.

I tried hard but I couldn’t learn anything. The scenery all went strange, like a picture on a high billboard. The fields, the clouds, the sky; none of it helped because it had nothing to do with me.

My mother must have watched in her rearview mirror. My arms crossed over my chest, I would have looked smaller and more solid in the distance. That was what she couldn’t stand, my stubbornness. She’d had a stubborn husband. She wasn’t going to have a stubborn child. But when she couldn’t see me anymore, she gave up and turned around and she’d gasp with relief when I was in front of her again, standing open-handed by the side of the road, nothing more than a child, her child.

And by the time I saw her car coming back, I’d be covered with a net of tears, my nose running. I stood there with my hands hanging at my sides, not even trying to wipe my face.

My mother would slow down and open my door and I’d run in, looking back once in a quick good-bye to the fields, which turned ordinary and pretty again. And when I slid into the car, I was different. I put my feet up on the dashboard and tapped the round tips of my sneakers together. I wore boys’ sneakers she thought I was too old for. But now my mother was nice because she knew I would talk to her.

“Are you hungry?” was the first thing she’d say.

“I am,” she’d say. “I feel like an ice cream cone. Keep your eyes open for a Howard Johnson’s.”

We always read the magazines, so we knew where we wanted to go. My mother had read about Scottsdale and Albuquerque and
Bel Air. But for miles, there was absolutely nothing. It seemed we didn’t have anything and even air that came in the windows when we were driving fast felt hot.

We had taken Ted’s Mobil credit card and we used it whenever we could. We scouted for Mobil stations and filled up the tank when we found one, also charging Cokes on the bill. We dug to our elbows in the ice chests, bringing the cold pop bottles up like a catch. There was one chain of motels that accepted Mobil cards. Most nights we stayed in those, sometimes driving three or four hours longer to find one, or stopping early if one was there. They were called Travel Lodges and their signs each outlined a bear in a nightcap, sleepwalking. They were dull motels, lonely, and they were pretty cheap, which bothered my mother because she would have liked to charge high bills to Ted. I think she enjoyed signing
Mrs. Ted Diamond
. We passed Best Westerns with hotel swimming pools and restaurants with country singers and we both wished and wished Ted had a different card.