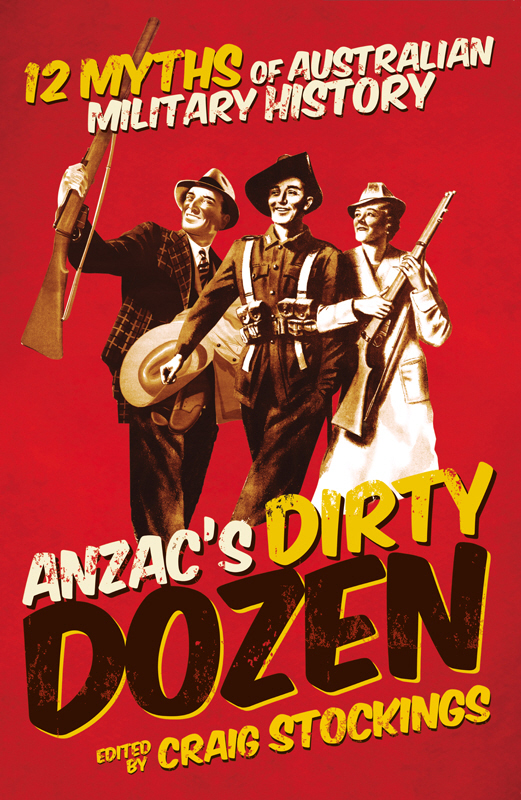 Â© in this edition Craig Stockings 2012

Â© in individual chapters is retained by the chapter authors

This book is copyright. Apart from any fair dealing for the purpose of private study, research, criticism or review, as permitted under the Copyright Act, no part may be reproduced by any process without written permission. Inquiries should be addressed to the publisher.

Â Â
3 Â Â What about New Zealand? The problematic history of the Anzac connection

12 Â Â Monumental mistake: Is war the most important thing in Australian history?

First and foremost I must acknowledge the authors of the various chapters of this book. The quality of their scholarship was matched by a spirit of co-operation which made the job of editing â without exaggeration â a pleasure. As readers familiar with Australian military historiography will be aware, the list of contributors to this book represents a large portion of the leading edge of scholarship in this field. I am personally and professionally indebted to a number of them. Thank you for being part of this project.

I would also like to express my gratitude once again to Phillipa McGuinness and the team at NewSouth Publishing. After having completed a number of projects with this publisher, I was, this time, unsurprised by the continuing vision, expertise, skilled and friendly support provided.

Further thanks to the long list of others who have assisted in any way in this project. I trust the product matches your faith and expectations.

D
R
D
ALE
B
LAIR
is a freelance historian currently teaching at Deakin University, Burwood campus. His areas of academic interest include Australia's involvement in World War I at home and abroad. His most recent publication is a battle narrative and analysis,
The Battle of Bellicourt Tunnel: Tommies, Diggers and Doughboys on the Hindenburg Line, 1918
(2011). Other publications include his study of the 1st Battalion, AIF,
Dinkum Diggers
(2001), and his study of illegitimate killing in World War I entitled
No Quarter
(2005).

D
R
C
HRIS
C
LARK
is head of the Office of Air Force History for the Royal Australian Air Force and a visiting fellow at the University of New South Wales, Australian Defence Force Academy. Although his interest since 2004 has been primarily on the history of air power, he has written extensively on broader aspects of Australian defence over many years. His
Encyclopaedia of Australia's Battles
(3rd edition 2010) continues to be a standard reference.

D
R
J
OHN
C
ONNOR
lectured in history at the Menzies Centre for Australian Studies, King's College, London, before taking up his current position as a senior lecturer in History at the University of New South Wales, Australian Defence Force Academy. His first book,
The Australian Frontier Wars 1788â1838
(2002), was shortlisted for the Royal United Services Institute's Westminster
Medal for Military Literature. His most recent book,
Anzac and Empire: George Foster Pearce and the Foundations of Australian Defence
(2011), is a biography of the Australian defence minister during World War I.

A
LASTAIR
C
OOPER
is a public servant and Navy Reserve officer with an abiding interest in Australian naval and military history. He was a contributing author to
The Royal Australian Navy
, the centenary history of the RAN, and is currently an interviewer for the RAN Oral History Collection.

D
R
B
OB
H
ALL
is a visiting fellow at the University of New South Wales, Australian Defence Force Academy. He is a Vietnam veteran and author of
Combat Battalion: The Eighth Battalion in Vietnam
(2000). Together with Dr Andrew Ross he is working on an Australian Research Council funded study of the combat performance of the 1st Australian Task Force in Vietnam.

D
R
E
LEANOR
H
ANCOCK
is an associate professor of History at the University of New South Wales, Australian Defence Force Academy. She has published on the history of the German war effort in World War II and on issues relating to women in the armed forces. She is the author of
The National Socialist Leadership and Total War 1941â1945
(1991); and
Ernst RÃ¶hm: Hitler's SA Chief of Staff
(2008).

D
R
K
ARL
J
AMES
has been a historian at the Australian War Memorial, Canberra, since 2006, where he has specialised in Australia's involvement in World War II. In 2011, he curated the memorial's special seventieth anniversary exhibition: âThe Rats of Tobruk, 1941'. Karl completed his doctoral thesis on the Bougainville campaign of 1944â1945, at the University of Wollongong.

D
R
M
ICHAEL
M
CKINLEY
is senior lecturer in International Relations and Strategy in the School of Politics and International Relations at the Australian National University. He has recently published
Economic Globalisation as Religious War: Tragic Convergence
(2007). His current major research projects comprise an analysis of the grand strategic decline of the United States by way of an historical comparison with the pre-Reformation Church, the problems of the neo-liberal university in teaching the subject of terrorism and counter-terrorism, and a comprehensive critique of the AustraliaâUS alliance based on previously excluded historical evidence.

D
R
A
LBERT
P
ALAZZO
is a senior research fellow at the Australian Army's Directorate of Research and Analysis in Canberra. He has written widely on warfare in the modern age and on the Australian Army in particular. His many publications include:
Seeking Victory on The Western Front: The British Army & Chemical Warfare in World War I
(2000);
The Australian Army: A History of its Organisation 1901â2001
(2001);
Defenders of Australia
(2002);
The Third Australian Division; Battle of Crete
(2005);
The Royal Australian Corps of Transport: Australian Military Operations in Vietnam
(2006); and
Moltke to bin Laden: The Relevance of Doctrine in Contemporary Military Environment
(2008). His current project is a book on the Australian Army and the war in Iraq.

D
R
A
NDREW
R
OSS
is a visiting fellow at the University of New South Wales, Australian Defence Force Academy. He is a former analyst with Central Studies Establishment, Defence Science and Technology Organisation. He is the author of
Armed and Ready: The Industrial Development and Defence of Australia 1900â1945
(1995). Together with Dr Bob Hall he is working on an Australian Research Council funded study of the combat performance of the 1st Australian Task Force in Vietnam.

D
R
C
RAIG
S
TOCKINGS
is a senior lecturer in History at the University of New South Wales, Australian Defence Force Academy. His areas of academic interest concern general and Australian military history and operational analysis. He has recently published a history of the army cadet movement in Australia,
The Torch and the Sword
(2007); and
Bardia: Myth, Reality and the Heirs of Anzac
(2009), a study of the First Libyan Campaign in North Africa 1940â1941.

D
R
C
RAIG
W
ILCOX
is a historian who lives in Sydney. His publications include:
For Hearths and Homes: Citizen Soldiering in Australia 1854â1945
(1998);
Australia's Boer War: The War in South Africa 1899â1902
(2002); and
Red Coat Dreaming
(2009), a study of colonial Australia's fascination with the British army. His current projects include an entry on Paul Brickhill for the Australian Dictionary of Biography.

Be warned at the very outset that this book may disturb, or even offend. It is, quite purposefully, a challenging collection of essays that, in debunking some of our most resilient misconceptions, goes beyond the controversial
Zombie Myths of Australian Military
History
, published in 2010. Both books might be read together in a complementary manner, yet they stand alone in their own right. While they share similarities in style and presentation,
Anzac's Dirty Dozen
is fundamentally different. Where the original
Zombie Myths
chose to examine a number of specific incidents in Australian military history â including Kokoda, the sinking of HMAS
Sydney
II, and Australian involvement in East Timor â this collection of essays takes a bolder thematic approach. This time around we are not so much concerned with laying to rest individual myths. In these twelve chapters we take aim at whole tribes and traditions. The stakes are higher.

Taker Of Skulls (Book 5) by William King
Heart of Gold by Michael Pryor
To All the Boys I've Loved Before by Jenny Han
When Night Closes in by Iris Gower
The Corridors of Time by Poul Anderson
The Forever War by Joe Haldeman
Siddon Rock by Glenda Guest
Undying Love (The Introduction) by sidney d
The Last Bastion by Nathan Hawke
Sealing Death by Basil E. Bacorn
Our partner