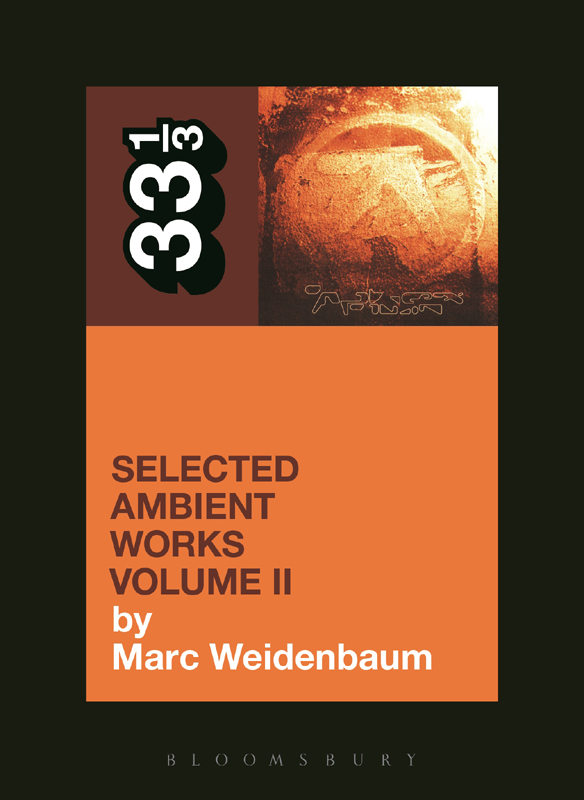 Praise for the series:

It was only a matter of time before a clever publisher realized that there is an audience for whom
Exile on Main Street
or
Electric Ladyland
are as significant and worthy of study as
The Catcher in the Rye
or
Middlemarch
… The series … is freewheeling and eclectic, ranging from minute rock-geek analysis to idiosyncratic personal celebration —
The New York Times Book Review

One of the coolest publishing imprints on the planet —
Bookslut

These are for the insane collectors out there who appreciate fantastic design, well-executed thinking, and things that make your house look cool. Each volume in this series takes a seminal album and breaks it down in startling minutiae. We love these. We are huge nerds —
Vice

We … aren’t naive enough to think that we’re your only source for reading about music (but if we had our way … watch out). For those of you who really like to know everything there is to know about an album, you’d do well to check out Continuum’s “33 1/3” series of books —
Pitchfork

For reviews of individual titles in the series, please visit our blog at
333sound.com
and our website at
http://www.bloomsbury.com/musicandsoundstudies

For a complete list of books in this series, see the back of this book

Forthcoming in the series:

The Grey Album
by Charles Fairchild

Freedom of Choice
by Evie Nagy

Live Through This
by Anwyn Crawford

1
This is the track listing for the vinyl version of Aphex Twin’s album
Selected Ambient Works Volume II
as it was released in the United Kingdom in 1994. There are various versions of the album’s track count, depending on region and format, some with as few as 23 tracks. Track titles can vary as well—more on that in the chapters ahead.

To Melinda and Clementine

“I am sitting in a room, different from the one you are in now.”

“Release the tension and the result is a flow of sound—an ebbing stream of energy-surges, waves of compression alternating with rarefaction which beat against our eardrums; taking a definite period of time before dying away to nothing.”

There Is No Volume I

A Chill-out Room of One’s Own

There Is No Volume I

The closest there is to a
Selected Ambient Works Volume I
is
Selected Ambient Works 85–92
, released two years prior on R&S, a Belgian label with which Aphex Twin eventually parted ways in favor of focusing on his own enterprise, a small label named Rephlex, and signing with the more established but then still-emerging Warp.

So, in the form of a reverse caveat, no, you have not inadvertently obtained a sequel without having first consumed the initial volume. This book is a standalone object about a record album that stands as a milestone of ambient music.

The disorientation provided by that “
Volume II
” in the album’s title—along with this book’s title for that matter—provides a useful starting point for getting situated with the music, because the music on
Selected Ambient Works Volume II
is a purposeful, willful engine of disorientation. The hope is that this book will offer a modicum of orientation, not just that it will provide a fixed map to a fluid landscape, but that the dynamic physics of that fluidity will also be explored.

At the near midpoint of
Selected Ambient Works Volume II
, a wind chime peeks through the album’s lush and pervasive haze and makes itself heard. The chime appears as a sequence of routinized figments in the final track on the first of the album’s two sides. That’s track 11 of 23, for those listening along at home to one of the US editions of the recording, and it is track 12 of the editions of the album that contain 24 or 25 tracks. A chart on page 126 of this book is available to help collate the different editions of the album. With just one exception, the tracks that constitute
Selected Ambient Works Volume II
are officially untitled, in that they lack proper names, and this wind chime track is not the exception.

We hear the wind chime, but we do not hear any actual wind. There is a brief, passing moment of whizzy, slipstream, sci-fi ether. It is like something that might accompany the jettisoning of waste—or of a fallen colleague—in deep space by an anonymous starship. This ether noise is synthesized, fleeting, “false.” The wind chime, by contrast, sounds “real,” even in the absence of wind. It is a wind chime resounding in a closed chamber, a specimen on clinical display.

The chime introduces its characteristic rhythm. The device itself is nothing special. It is standard issue. It is the same wind chime that dangles from a neighbor’s porch, situated fittingly right between a dreamcatcher and a flycatcher: between the mystic and the functional.

The chime introduces rhythm, but the rhythm is loose at best. It is a rhythm-less rhythm, in that it lacks a discernible downbeat. The chime cycles through, its pattern a marvel of a unique phenomenon: the very pattern-less-ness reveals itself as pattern. There is no beat in the traditional sense of a beat. What there is is a series of beat-like segments that collectively suggest a kind of whole: in the place of meter we have a metric temperament. The track depends on a droning, slowly developing tonal center for any sense of compositional undergirding. Yet in its seeming beatless-ness, its harmonic drift, its largely synthetic raw material, the track still feels like a song. And like most any proper song, it has a vocal, but such as it is the vocal is merely snippets of voices in plausible conversation (“plausible” because the voices are garbled, as if heard through the wall from a neighboring room). Even when this strange music agrees to speak, it muffles its message. Such is the nature of the remote pleasure—and an often delirious pleasure it is—of Aphex Twin’s
Selected Ambient Works Volume II
.

The wind chime originates from a distant time, a time even further back than 1994. It relates to an object known to the ancient Greeks as an aeolian harp, named in honor of Aeolus, the god of the wind. The wind chime is, by most accounts, the original “generative” instrument: it is the original device that serves dual essential purposes, as composition and as tool. To create a wind chime is to create a musical composition in physical form; it is to set down rules (the number, timbre, and relative proximity of notes) that when enacted by a player—by the wind or, if you tend toward the spiritual, perhaps by Aeolus himself—result in something sonorous, something melodic, something song-like. The remoteness of this something is, to borrow a term provided by another Greek myth, tantalizing.

El último grumete de la Baquedano by Francisco Coloane
Kiss me if you dare: Alpha Billionaire Romance (The Secret Matchmaker Book 3) by Pearl, L.N., Lee, S.K.
The Many Deaths of Joe Buckley by Assorted Baen authors, Barflies
The Fat Man in History and Other Stories by Peter Carey
Rescue Me by Allie Adams
The Song Of Ice and Fire by George R. R. Martin
Uncharted (Unexpected Book 3) by Claudia Burgoa
The Scream by John Skipper, Craig Spector
Made to Love: Carmen and Cooper's Story by Candace Werts
Pleasure in Hawaii (Kimani Romance) by Archer, Devon Vaughn
Our partner