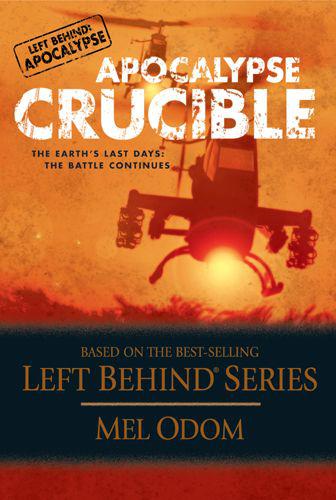 What People Are Saying about the Left Behind Series

“This is the most successful Christian-fiction series ever.”

“Tim LaHaye and Jerry B. Jenkins … are doing for Christian fiction what John Grisham did for courtroom thrillers.”

“The authors’ style continues to be thoroughly captivating and keeps the reader glued to the book, wondering what will happen next. And it leaves the reader hungry for more.”

“Bible teacher LaHaye and master storyteller Jenkins have created a believable story of what could happen after the Rapture. They present the gospel clearly without being preachy, the characters have depth, and the plot keeps the reader turning pages.”

“Christian thriller. Prophecy-based fiction. Juiced-up morality tale. Call it what you like, the Left Behind series … now has a label its creators could never have predicted: blockbuster success.”

Tyndale House products by Tim LaHaye and Jerry B. Jenkins

Other Tyndale House books by
Tim LaHaye and Jerry B. Jenkins
Perhaps Today
Are We Living in the End Times?

Discover the latest about the Left Behind series at
www.leftbehind.com

This novel is a work of fiction. Names, characters, places, and incidents either are the product of the author’s imagination or are used fictitiously. Any resemblance to actual events, locales, organizations, or persons, living or dead, is entirely coincidental and beyond the intent of either the author or the publisher.

Left Behind
is a registered trademark of Tyndale House Publishers, Inc.

First Sergeant Samuel Adams “Goose” Gander heard the cry from the spotter/sniper teams he had set up along the nearby rooftops. As the warning was repeated over the radio communications system his team used, he gathered his thoughts, feeling the adrenaline slam through his system.

“All right, Rangers,” Goose barked over the ear/throat headset he wore, “stand sharp.”

“Standing sharp, First Sergeant,” one of the nearby soldiers responded. Others chimed in, letting Goose know they had heard him. Despite the constant threat they had been under for days, all of the men stood tall and solid. They were men Goose had trained, men he had placed on special assignment, and men he had promised to die with if that should become necessary.

Goose stood behind the barricade of cars and farm equipment the Rangers had set up at the edge of the city when they had arrived in Sanliurfa two days ago. The soldiers had barely escaped an avalanche of Syrian troops—Soviet-made tanks, a horde of infantrymen, and squadrons of jet fighters.

Since then, United States military personnel as well as the remaining local citizenry had added to the barricade, using abandoned vehicles and everything else that came to hand. The military teams and the locals fighting for their homes stayed busy filling sandbags and shoring up the defenses. Sandbags filled the cracks and crevices, made machinegun nests, and reinforced primary buildings used for defense and tactical information. For the time being, all roads south out of Sanliurfa were closed.

The Syrians were coming. Everyone knew it. Their arrival was only a matter of time. Apparently, that time was fast approaching.

Goose closed down the manpower and equipment lists he’d been reviewing on his PDA and tucked the device inside a protected pocket on his belt at his back. The low-lit LCD screen had temporarily robbed him of his full night vision, but he had to check it. A sergeant should always know where his men and materials were, and where they were needed. The PDA made that task almost doable.

He ran a practiced eye down the line of soldiers who stood at battlefield positions along the barricade. Like him, they wore the battledress uniforms they had worn for days. All of the BDUs showed hard use in the form of rips and tatters covered by a layer of the everpresent dirt and grit that shifted across the sun-blasted lands. Every man in the field had been under fire during the last three days.

They’d had neither the time nor supplies to allow them the luxury of rest or fresh clothing. Thankfully, they’d had plenty of socks, and Goose had seen to it that each man changed socks frequently. A foot soldier was only as good as his feet. An infantry that couldn’t march was no help to an army seeking survival and was often a burden.

Goose took pride in the way his men stood at their posts despite their hardships. His unit was undermanned, underequipped, and too far away from reinforcements that wouldn’t have been sacrificed on Sanliurfa anyway. Sanliurfa, the City of Prophets, was a stopgap, a strategic position that would be given up at a dear price when the time came. The American forces planned to give the outlying troops a window of opportunity, a chance to put together a counteroffensive against the Turkish juggernaut rolling up out of the south. Despite the knowledge that they were already paying a hefty blood price for something they could never hold, Goose’s Rangers stood tall and proud and vigilant.

Holding his M-4A1 assault rifle in his right hand, his finger resting on the trigger guard and not on the trigger, as his father had trained him even before he’d first put on the uniform of a United States fighting man seventeen years ago, Goose trotted down the barricade line.

His left knee ached as he moved. He’d sustained the original injury years ago in a war with Iraq. The military doctors had put everything back together as best they could, declaring him fit for duty. Then, only three days ago, he’d reinjured his knee, just before the Syrian army’s unprovoked attack against the Turkish army forced 3rd Battalion’s 75th to retreat from the Turkish-Syrian border. During that engagement, in what Goose believed to be a completely unrelated happening, a large percentage of the world’s population had disappeared without explanation.

During the last two days in Sanliurfa, he and his men had gleaned from the sporadic news coverage that the world at large was as confused about the disappearances as his troops had been when it happened. Goose, of course, had developed his own theories about what had happened. But, according to the media, several possible explanations were being advanced for the mysterious disappearances that left empty clothing in piles where men and women and children had been.

The thought of all the missing children brought a sharp pang to Goose’s heart. His five-year-old son, Christopher, had been one of the children who had disappeared without a trace. So far, although the facts hadn’t been confirmed, it seemed that every young child on the face of the planet had vanished.

Goose hadn’t been able to say good-bye to Chris. He hadn’t even known until many hours later that he had lost his young son. He could only trust that Chris was in good hands—
is in God’s hands,
he desperately reminded himself—because he struggled to believe the boy was in those hands. Everything had happened so suddenly.

“Eagle One,” Goose called over the headset. “This is Phoenix Leader.”

“Go, Leader. You have Eagle One.” The reply was crisp and confident. Eagle One was Terry Mitchell, a career man with ten years service under his belt and one of the best spotter/snipers Goose had ever worked with.

“Where away, Eagle One?”

Goose reached the end of the barricade section that sealed off the street. The barricade stretched twenty blocks, backed by everything the Rangers could cobble together for defense. Heavy cavalry in the form of M1 Abrams tanks and Bradley M2 and M3 armored personnel carriers backed the barricaded sections in strategic locations. Supporting the tanks and APCs, scattered jeeps, Humvees, and Ranger Special Operations Vehicles (RSOVs) operated as couriers for ammo and stood ready to offer quick transportation for wounded. Several of their vehicles had been lost during the Syrian border attack, and his men had appropriated anything that was running for their defense of the city.

“What do you see?” Goose started up the metal fire escape that zigzagged up the outside of the three-story apartment building that stood as the cornerstone of the barricade.

“A line of vehicles. Tanks, APCs.”

“Confirmed, Leader. Syrian. They’re flying colors and proud of them.”

The Art of Redemption by Ella Dominguez
How to Eat a Cupcake by Meg Donohue
The Seventh Victim by Mary Burton
Their Dark Hunter (Masters of Darkness) by Angelini, Alaska
Beach Wedding by Cruise, Bella
The Collector by John Fowles
The Quiet Girl by Peter Høeg
July (Calendar Girl #7) by Audrey Carlan
Cómo mejorar su autoestima by Nathaniel Branden
Try Fear by James Scott Bell
Our partner