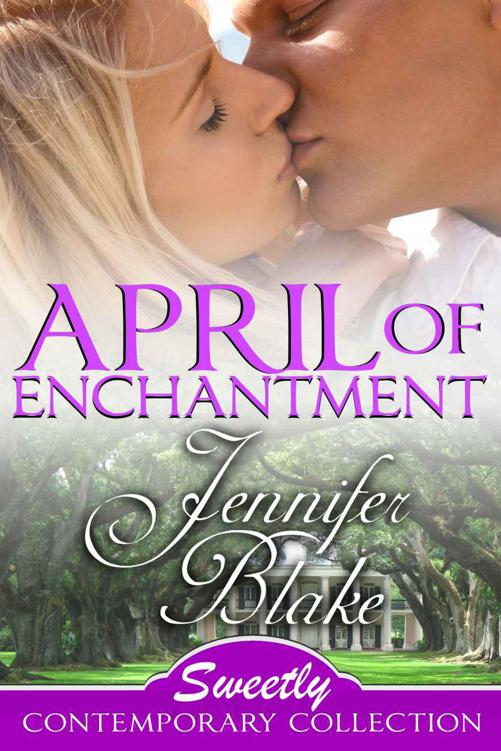 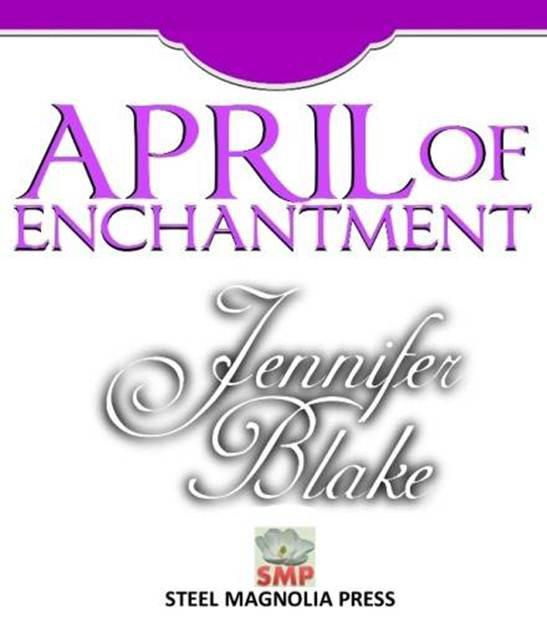 “Who the devil are you?”

The words rang out loud and harsh in the room shadowed with encroaching twilight. Laura Nichols swung around with a gasp, her violet eyes wide with shock. Her hair, like a shimmering honey-gold curtain, swirled around her, glowing with a life of its own in the dimness. A man stood in the doorway of the nineteenth-century bedroom. He seemed to fill the frame, blocking her exit, a dark man with anger stamped on his hard features.

As she faced him, his expression changed, smoothing to stunned surprise. His dark gaze flicked over the cascading waves of her hair that reached well below her waist, moving to the pure oval of her face with its delicate winged brows, straight nose, and finely molded lips, and down over her slender form in jeans and a plaid shirt. His dark eyes snapped upward, clashing with her own blue-violet stare.

“I asked you a question.”

Laura lifted her chin. “I might ask the same thing of you.”

He stepped over the threshold and came toward her then, a broad, lithe, almost menacing figure in casual pants and a knit shirt. His words as measured as his steps, he said, “I own this old place, and I don’t like trespassers, or teenage vandals who think it’s great fun to spray the walls with paint or knock out stair balusters.”

She moistened her lips with the tip of her tongue as he came to a halt in front of her with his hands on his hips. “You — you must be Mr. Roman.”

“I am,” he said, his voice dropping to a soft tone that carried a hint of danger, “and I’m waiting to hear who you are and what you are doing here.”

“I’m Laura Nichols. Russ Masters gave me a key so I could come by and see what kind of damage the kids who got in last night had done.”

“I’m touched at your concern, but I don’t see what business it can possibly be of yours.”

Laura stared at him. “I thought you knew. I’m the historical consultant for the restoration of Crapemyrtle.”

He lifted a brow, allowing his gaze to move over her once more. “You must be joking.”

“I assure you I’m not. I was hired two weeks ago by the firm of Masters & Masters, the architects you put in charge of the project.”

“Impossible. I specifically requested the services of a qualified expert.”

Irritation stirred inside Laura. “How do you know I’m not?”

“You don’t look old enough to be out of high school, much less have earned a degree in history.”

“There was nothing said about a college degree being necessary.” With a faint flush rising to her cheekbones, Laura took the ribbon she held in her hand, forgotten until now, and began to tie her hair in a long pony tail.

“Maybe not to you, but I certainly told Russ Masters what I required. Crapemyrtle is an old and historically valuable piece of property. It will require an immense amount of time, research, and dedication to put it back the way it was when it was built a hundred and forty years ago. I don’t intend to see the job botched by an amateur.”

Her head came up. “An amateur? Mr. Roman, I may not have a degree, but I am no amateur at historical preservation. I have been going in and out of the old houses in this section of Louisiana all my life. Before his death my father was a carpenter who specialized in renovation, and my mother and I still live in the Nichols family home, which is every bit as old as this one.”

“Very interesting, but it doesn’t make you an expert.”

“That’s a matter of opinion. I would be willing to bet that I know more about woodwork and refinishing, period details and embellishments than any stodgy history professor at college who never painted a jib door or polished a piece of brass. I know the best suppliers, the best wrecking barns where they keep aged, recycled wood — windows, doors, and the like — and also the best millworkers, plasterers, and other workmen. More than that, I have taken a number of courses in interior decoration, especially period design.”

“Have you ever supervised a complete restoration job from start to finish?”

“I thought not. This isn’t a part-time project. Miss Nichols. When I agreed to let Masters & Masters handle the restoration, it was with the understanding that the modernization — the new kitchen addition and bathrooms — would be finished within six months; no longer. You will have to coordinate your efforts with those of the architect, the contractor, and his carpenter crew, to say nothing of the various cabinetmakers, painters, woodcarvers, and artists. I am engaged to be married, and I want this house ready before the wedding. I don’t have time to waste.”

“I can promise you, Mr. Roman,” Laura said firmly, her violet eyes dark with anger, “that any delays will not be my fault.”

“‘I prefer not to take that chance.”

“Are you saying I’m fired?” she asked slowly.

“That’s about the size of it.” He stared down at her, his dark gaze firm.

“On the basis of how I look? Because I’m a female and under thirty?”

“There’s no need to take it personally. I would feel the same if you were a teenage boy.”

“Not a great age, compared to how long this house has been here and how long it will remain.”

He could be calm and philosophical because he thought he had the upper hand. It crossed her mind to wonder how old he was. Justin Bienvenu Roman, hardworking, high-powered businessman, scion of an old French-Creole family who had been successful enough to buy back the old family mansion — he did not look to be more than a few years over thirty.

“You couldn’t have been much older when you started building your fortune.” She pushed her hands into the pockets of her jeans, waiting for his reaction.

He tilted his head to one side. “It seems you have the advantage of knowing more about me than I do about you. How is that, I wonder?”

“I was interested in who had bought Crapemyrtle, and why.”

“And who supplied you information?”

“Russ Masters. I believe he’s a friend of yours, as well as your architect.”

“Also a friend of yours, I suspect.”

“That’s right,” she answered, wariness creeping into her tone.

She stiffened. “If you think that’s the reason I was hired for this job, you are mistaken.”

“The thought had occurred to me.”

“It had nothing to do with it. My credentials were more than satisfactory for Russ and his father. They have seen me on the sites of restorations more times than any of us can count. More than that, they recognize the importance of the diary.”

“The diary? That is what you said?”

Laura closed her lips tightly together. She wished she had never mentioned it. “I suppose no one told you about that, either.”

“As it happens, they didn’t, but I haven’t spoken to Russ in some time.”

“Surely he called you about the break-in?”

“I didn’t speak to him. I’ve been out of the office on business. I found his message, as well as the police report, when I returned this afternoon.”

“And you drove straight down? You could have saved yourself a trip. The damage was slight.”

“So I see, but though I’m certain your opinion is professionally correct, I preferred to see for myself.”

The irony in his tone could not be mistaken. Laura was beginning to dislike this dark, self-assured man intensely. Her nerves still tingled from the scare he had given her, coming upon her so stealthily in the stillness of the old house. She had not heard his car pull up outside, but then she had been so engrossed in the atmosphere of the old mansion, so intent on her fanciful pretense at belonging to it and to another time. She had been thrown off balance at discovering someone else in the house, but that was nothing to her confusion at being caught with her hair flowing around her shoulder in front of the enormous, pedimented cheval glass. She felt foolish, embarrassed, defensive, and not at all up to coping, just this minute, with the sardonic appraisal she saw in the eyes of the man in front of her.

She swung away from him. “Are you certain you’re Justin Roman? You don’t seem very well informed. How do I know you aren’t a trespasser, some kind of tramp planning on spending the night with a roof over his head and a fire in the fireplace?”

The quiet sound of his words caught at her attention and she flung him a quick glance over her shoulder. “There are all sorts of weird things that happen in houses like these, this far out of town, deserted, with no neighbors. People move in, set up communes of the drug-high unemployed, or stage beer-drinking parties, even hold séances, devil-cult ceremonies —”

Alarm coursed along her veins, but she could not seem to change the dangerous course the conversation had taken. “You might be anybody.”

“So I might. In which case, it was a little unwise of you to come out here to Crapemyrtle alone, wasn’t it?”

“I — I’ve heard about those things, but I’ve never seen any evidence except for empty beer cans scattered in the rooms of some old house.”

He was between her and the inside door. She moved away, edging toward the French windows that led from the bedroom out onto the front gallery. They were bolted from the inside. All she had to do was pull up the iron rod that held the bolt in place.

“You’ve been lucky, until now.”

“No such thing. I’m always careful. I never go into a place if there is any sign of occupation.”

Damien: Billionaire Bad Boy Romance by Ellen Harper
DECEPTION - A Family Affair by Michele Lee
Through The Leaded Glass by Fennell, Judi
The Berkeley Method by Taylor, J. S.
Little Prick by Zenina Masters
Back To You by Migeot, Cindy
Grime by K.H. Leigh
Her Accidental Husband by Mallory, Ashlee
The Way Of The Dragon by Chris Bradford
Lost & Bound by Tara Hart
Our partner