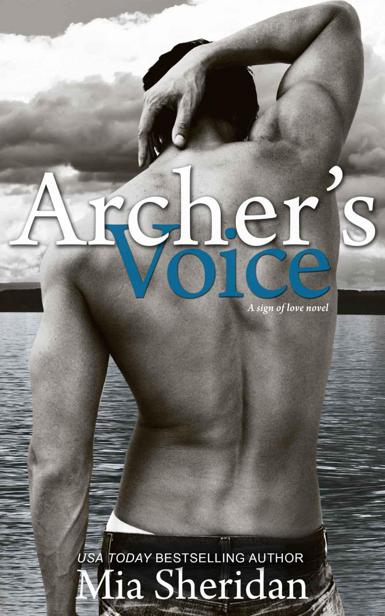 This book is a work of fiction. Names, characters, places, and incidents are the product of the author’s imagination or are used fictitiously. Any resemblance to actual events, locales, or persons, living or dead, is coincidental. Copyright © 2014 by Mia Sheridan. All rights reserved, including the right to reproduce, distribute, or transmit in any form or by any means.

This book is dedicated to my boys, Jack, Cade and Tyler. The world needs as many good men as possible. I'm proud to be putting three of them out there. Brothers 'til the end.

The Legend of Chiron the C
entaur

The Centaurs as a group, were known to be rabble rousers, given to drunkenness and rowdy, lusty behavior. But Chiron wasn't like the rest–he was called the 'Good Centaur,' and 'The Wounded Healer,' wiser, gentler, and more just than those of his kind.

Sadly,
he was shot by his friend, Hercules, with a poisoned arrow when Hercules was fighting the other centaurs. Because Chiron was immortal, he was unable to find relief from this incurable wound, and lived his life in agonizing pain.

Eventually, Chiron
came upon Prometheus who was suffering an agony as well. Prometheus had been sentenced to eternal torment by the Gods and was tied to a rock, where, every morning, an eagle was sent to eat Prometheus' liver, and every evening, it grew back.

Chiron offered
to willingly give up his life for Prometheus, therefore setting them both free from their eternal torment. Chiron dropped dead at Prometheus' feet. But because of his goodness and service, Zeus made Chiron a part of the stars, the constellation, Sagittarius, where his beauty could be gazed upon for all time.

Chiron's wound symbolizes the transformative power of suffering–how personal pain, both physical and emotional, can become the source of great moral and spiritual strength.

"Grab my hand! I got you," I said real soft, the helicopter lifting off the ground as Duke grabbed Snake Eyes' hand. I was trying to play as quiet as I could–my mama was banged up again and I didn't want to wake her where she was sleeping up in her room. She'd told me to watch cartoons up in bed with her and I had for a while, but when I saw she was asleep, I'd come downstairs to play with my G.I. Joe toys.

The helicopter landed and my guys jumped out and ran under the
chair that I had put a towel over to make into part of an underground bunker. I picked the helicopter up and lifted it off the ground again with a
whop, whop, whop
sound. I wished I could snap my fingers and make this a real helicopter. Then I'd pull my mama onto it and we'd fly away from here–away from
him
, away from the black eyes and my mama's tears. I didn't care where we'd end up as long as it was far, far away.

I crawled back into my bunker and a few minutes later,
I heard the front door open and close, and then heavy footsteps walking through our foyer and down the hall toward where I was playing. I peeked out and saw a pair of shiny black shoes and the cuffs of what I knew were uniform pants.

I crawled
out as fast as I could saying, "Uncle Connor!" as he kneeled down and I threw myself into his arms, making sure to stay clear of the side where he kept his gun and police flashlight.

"Good
. See the underground fortress I built?" I said, leaning away and proudly pointing back over my shoulder at the fort I had made under the table using blankets and towels. It was pretty cool.

Uncle Connor smiled
and glanced behind me. "I sure do. You did a good job there, Archer. I've never seen a fortress quite as impenetrable-looking as that one." He winked and smiled bigger.

I grinned.
"Wanna play with me?" I asked.

I felt
my own face fall. "Um, she's not feeling real good. She's laying down." I looked into Uncle Connor's face and golden brown eyes. The picture that popped into my head right away was the sky before a storm–dark and sort of scary. I moved back slightly, but as quick as that, Uncle Connor's eyes cleared and he pulled me into him again, squeezing me.

"Okay, Archer, okay," he said. He set me back from him and held onto my arms as his eyes moved over my face. I smiled at him and he smiled back.

"You have your mama's smile, you know that?"

I smiled bigger. I loved my mama's smile–it was warm and beautiful and it made me feel loved.

"But I look like my daddy," I said
, looking down. Everyone said I had the Hale look about me.

He just stared
at me for a minute, looking like maybe he wanted to say something, but then changed his mind. "Well, that's a good thing, buddy. Your daddy's a handsome devil." He smiled at me, but it didn't move up into his eyes. I looked at him, wishing I looked like Uncle Connor. My mama told me once that he was the most handsome man she'd seen in her whole life. But then she'd looked guilty like she shouldn't have said that. Probably because he wasn’t my daddy, I guessed. Also, Uncle Connor was a police officer–a hero. When I grew up, I was gonna be just like him.

Uncle Connor stood up. "I'm gonna go see if your mama's
awake. You play with your action figures and I'll be down in a minute, okay, buddy?"

When I got to the top of the stairs, I stood just outside the door to my mama's room, listening. The door was just open a crack, but it was enough.

"You're not okay, Alyssa
," he hissed, his voice breaking at the end in a way that scared me. "Jesus. I want to kill him. I'm done with this, Lys. I'm done with the martyr routine. You might think you deserve this, but Archer. Does. Not," he said, spitting out the last three words in a way that let me know that his jaw was tight like I'd seen it before. Usually, when my daddy was around.

I heard nothing but my mama's soft crying for a few minutes before
Uncle Connor spoke again. This time his voice sounded strange, no expression in it.

"You wanna know where he is right now? He left the bar and went home with Patty Nelson. He's screwing her three
ways from Sunday in her trailer. I drove by and could hear it from inside my car."

"God, Connor," my mama's voice choked out. "Are you trying to make this worse–"

"No!" his voice roared and I jumped slightly. "No," he said more quietly now. "I'm trying to make you see that it's enough.
It's enough
. If you think you needed to pay a penance, it's paid. Don't you see that? You were never right in that belief, but for the sake of argument, let's say you were–it's paid up, Lys. It's long since paid up. Now we're all paying. Christ, do you wanna know what I felt when I heard the sounds coming out of that trailer? I wanted to bust in there and beat the shit out of him for humiliating you, disrespecting you that way. And the fuck of it all is that I should be happy that he's with someone other than you,
anyone
other than the woman that is so fucking deep under my skin, I couldn't dig you out with a jackhammer. But instead, I felt sick about it. Sick, Lys. Sick that he wasn't treating you right, even though him treating you right might mean I could never have you again."

It was quiet from inside the room for a couple minutes and I wanted to peek inside, but I didn't.
All I heard was my mama's soft crying and some slight rustling.

Finally
, Uncle Connor went on, his voice quiet now, gentle, "Let me take you away from here, baby, please, Lys. Let me protect you and Archer. Please." His voice was filled with something I didn't know the name for. I sucked in a quiet breath. He wanted to take us away from here?

"What about Tori?" my mama asked quietly.

It was a couple seconds before Uncle Connor answered, "I'd tell Tori I was leaving. She'd have to know. We haven't had any kind of real marriage for years anyway. She'd have to understand."

"She won't Connor," my mama said, sounding scared. "She won't understand. She'll do something to get even with us. She's always hated me."

"And Travis?" she asked quietly.

There was a pause. "I'll work something out with Tori," he said. "You don't need to worry about that."

There was more
silence, and then my mama said, "Your job, the town…"

"Alyssa,"
Uncle Connor said, his voice gentle, "I don't care about any of that. If there's no you, nothing else matters. Don't you know that by now? I'll resign from my job, sell the land. We'll live a life, baby. We'll find some happiness. Away from here–away from this place. Somewhere we can call our own. Baby, don't you want that? Tell me you do."

There was more silence, only I heard soft sounds like maybe they were kissing. I had seen them kissing before when my mama didn't know I was spying, like I was doing now. I knew it was wrong–
mamas weren't supposed to kiss men who weren't their husbands. But I also knew that daddies weren't supposed to come home drunk all the time and slap their wives in the face, and that mamas weren't supposed to look at uncles with the soft look my mama always got on her face when Uncle Connor came around. It was all mixed up and confused and I wasn't sure how to sort it all. That's why I spied on them, trying to understand.

Finally, after what seemed like a long time, my mama whispered, so I could barely hear, "Yes, Connor, take us away from here. Take us far, far away. Me an
d you and Archer. Let's find some happiness. I want that. I want you. You're the only one I've ever wanted."

I snuck away, making my way back down the stairs, in between the no
isy spots, not making a sound, moving in silence.