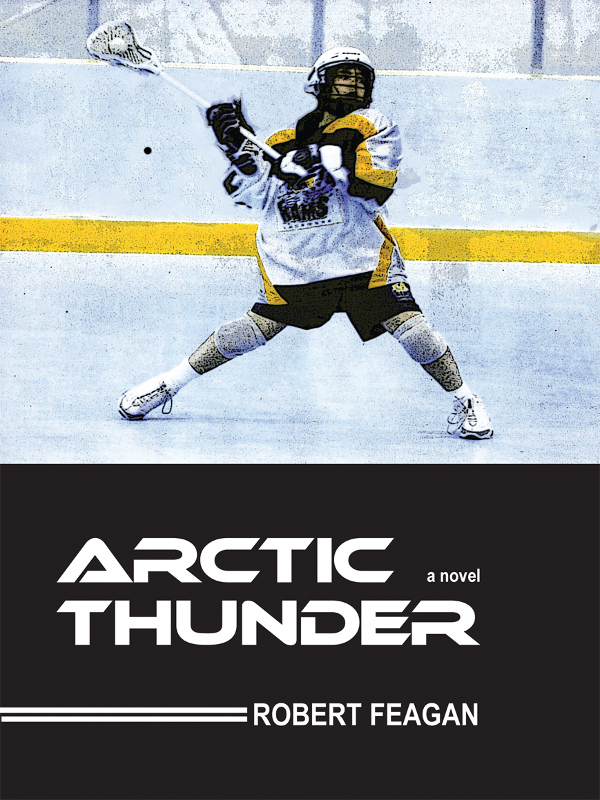 Printed and bound in Canada.

To Mike and all of the incredible athletes
who have played our first national sport in
the shadow of that other Canadian pastime.
And to the memory of Victor Allen.

I
would like to thank Loretta Trimble Hopkins and Gerry Kisoun for their contributions to the background information in
Arctic Thunder
. I would also like to thank the Kisoun and Allen families for providing information on Victor Allen and allowing me to pay tribute to his memory through his character in the novel.

M
ike stood at centre floor and bent forward at the waist, resting his stick across his thighs. Staring down, he watched as a bead of sweat slowly rolled the length of his nose and dropped through the cage of his helmet, plopping onto the smooth concrete floor. He took a deep breath, then exhaled with force as he straightened and glanced at the clock.

Forty seconds left in the third and final period. Red Deer Chiefs 7, St. Albert Rams 7. Mike shook his head in frustration and disbelief. It should never have come to this. They had been leading Red Deer 7â3 with four minutes left. That was before the roof caved in and the Chiefs roared back. Sure, it was box lacrosse and the tempo could swing in either direction in a finger snap, but this was the provincial final and St. Albert was a better team than this.

“Ref! Time out!” Mike's father, Ben Watson, who coached the team, was standing on the bench, wildly motioning to the referee with the palm of his left hand across the fingertips of his right hand in the shape of a T. The official blew his whistle and motioned to the timekeeper that the Rams had a twenty-second timeout. Mike shuffled toward the bench.

“Hustle up, hustle up!” Ben shouted to his team as they moved in close to their coach. “This is it, guys. This is our whole season, right here and now. Ryan, Cayln, Mike, Spencer, Scott, you're on the floor. Ryan, you have to win this one. Go for a drawback between your legs. Mike and Cayln, you know where the ball's going. Be there. Once we get possession, don't panic. Set up in their end and use the full thirty-second clock. If we can use the full clock, or get a shot and a reset before we score, then they won't have anything to work with. And, guys, believe me â” he paused and looked right at Mike “â we
are
going to score. Run play number three. Spencer, that means you move in for that pick. Have you got it?” The boys all nodded. The referee whistled behind them, signalling the timeout was over. “All right, guys, put it in and, Rams, let's win!”

The boys stuck out an arm with their gloves pressed together. “One, two, three,
Rams
!” they shouted.

Mike walked to his position just outside the centre faceoff circle, his frustration replaced by a sense of anger and purpose. He was competitive by nature and burned inside when he thought how they had squandered their lead. His dad was right. They were going to win this.

Ryan Domino was one of the best point men Mike had ever seen. Nine times out of ten he won the faceoff and sent the ball in the direction they planned. Scott Sutherland and Spencer Lorenz were both big and strong but more offensive than average shooters. Scott had taken up lacrosse later than most of the boys, but his mature build and strength made him a dominant force on the defensive side of the ball. Spencer's father, Todd, had played for the New Westminster Salmonbellies, had nine national championships, and had been inducted into the Canadian Lacrosse Hall of Fame. Spencer was the most naturally talented player Mike had ever seen.

Cayln Butz was fast and had a knack for getting open no matter what. With him on the opposite crease position, it had proven to be a great combination for scoring plenty of goals this season. Even though the majority of their players were only thirteen and first-year bantams like Mike, they had been one of the best teams in Alberta. This was the time to prove it.

A Chiefs player pushed himself in front of Mike, who shoved him back. They briefly jostled for position, but it didn't matter. Mike knew the ball would go to his right and that he would spin away at the whistle and run in that direction. Cayln would come from the other side of the ball.

Ryan and the opposing point man from the Chiefs knelt in the faceoff circle and put the baskets of their sticks back to back. The referee carefully placed the ball between the mesh of their sticks and slowly backed away, hand raised, whistle poised in his lips. The crowd yelled and clapped. Then the whistle blew, and the outside world vanished as Ryan pushed down hard on his stick and drew the ball between his feet.

At the whistle Mike used the Chiefs player as leverage and raced past him, heading to the right of the faceoff circle. He saw the ball spin out behind Ryan between his legs and bounce toward the boards on that side. Cayln, Mike, and two Chiefs players arrived together in a flurry of sticks, bodies, pushing, and shoving. Mike fell hard but spied Cayln emerging from the cluster as he scooped up the ball. Twisting from the pack with the ball, Cayln ran toward his own end, passed the ball to Spencer, then turned and loped quickly into the Red Deer zone.

“Set it up, set it up!” Spencer shouted behind Mike as he travelled into the Red Deer zone. Cayln shifted to the corner just left of the Chiefs' net, and Mike veered to the opposite side. Spencer and Scott set up high as Ryan moved just outside the goalie's crease. The Red Deer players set up in a defensive box, sticks held high, keeping the Rams to the outside and away from the net.

Spencer pretended to pass to Cayln, then got the ball over to Scott, who took a few steps in. After faking a shot, Scott passed the ball back to Spencer. Twenty seconds left on the shot clock. Ryan went down in front of the net as a Chiefs player checked him hard with a stick across the left arm. Spencer feigned a pass back to Scott but instead bounced the ball in to Cayln in the corner. Fifteen seconds left on the shot clock.

Ryan scrambled to his feet and moved to the left side of the net toward Cayln. “Three, three!” Ben cried frantically from the bench. Spencer ran in and planted himself beside the defender covering Cayln, who tried to dodge past but was blocked by another Chief. Cayln shifted back to the corner. Trapped! The play wasn't going to work. Eight seconds left on the shot clock.

With Cayln stuck in the corner, Mike lunged as if he were going to deke in front of the net. Instead he spun and raced behind the net from the right side. Five seconds on the shot clock.

“Now, now!”
Mike shouted as he came around the left side of the net. With two Chiefs sticks held high in front of him, Cayln threw the ball between them in desperation. The ball came out too far ahead of Mike. Never taking his eyes off the ball, Mike stretched out, and as the ball hit the top of the pocket of his stick, he turned it and fired at the net in one quick-stick motion. A Chiefs player hit him from behind as the ball left his stick, sending him sprawling across the floor.

Landing face down, Mike heard the crowd roar. Before he could even think about looking at the net, hands grabbed him from all directions. Cayln and Spencer pulled him to his feet as Scott and Ryan threw their arms around his neck.

In My Shoes: A Memoir by Tamara Mellon, William Patrick
The Dead War Series (Book 1): Good Intentions by Simmons, D.N.
Smoke and Mirrors by Jenna Mills
2nd Earth: Shortfall by Edward Vought
The Jury by Gerald Bullet
The Vanishing Island by Barry Wolverton
Just As I Thought by Grace Paley
The Turning-Blood Ties 1 by Jennifer Armintrout
Motti by Asaf Schurr
Please Don't Go by Eric Dimbleby
Our partner