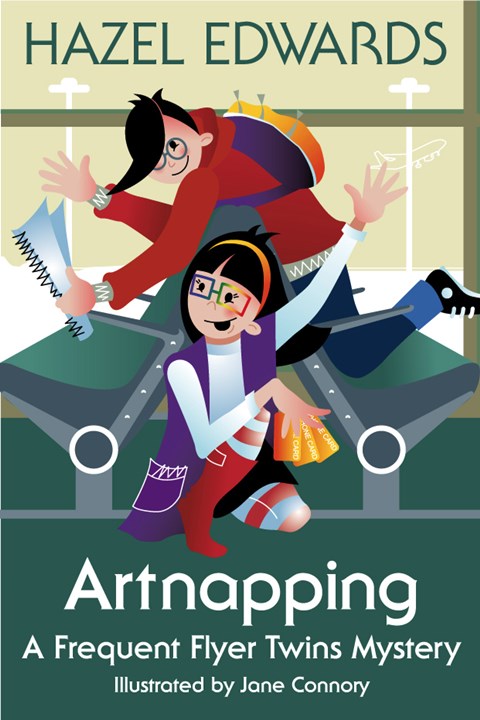 Illustrated and designed by Jane Connory.

When their Tokyo plane is grounded in Sydney, due to cabin mist, the Frequent Flyer Twins become involved in an oriental antique mystery. What is being artnapped? Why are security guards watching the Rembrandt? And why is the dealer so interested in Amy's phone card collection? There's a mix up with photos. What has happened to photographs of the newly married Japanese wedding tourist group? What about Tess, the art student who is working her way around the world? She can draw very well.

Is she what she seems or is she a fake?

Why is there a silver container in her luggage? Where is the missing Ming dynasty vase from the ancestral shrine? What is the courier carrying in the briefcase chained to his arm and where do the R.P.G. group fit in?

Airport security changes fast. If our Frequent Flyers travelled tomorrow, there would be new regulations and electronic devices.

Some of their past mysteries were solved without the technology we have now.

Also in the Frequent Flyers Series, by Hazel Edwards.

Illustration and design by Jane Connory.

All electronic rights reserved. No part of this book may be reproduced, stored in a retrieval system, or transmitted by any means, electronic, mechanical, photocopying, recording, or otherwise without written permission from the publisher. Although every precaution has been taken in the preparation of this book, the publisher and author assume no responsibility for errors or omissions. Neither is any liability assumed for damages resulting from the use of the information contained herein.

Chapter 10 Return of the Samurai Sword

âArtnappers might steal it. So they're guarding the Rembrandt,' said the cabin attendant. He bent down to peer out through the plane window. âThat painting from the Museum.'

Kneeling at the window seat, the twins stared down. On the tarmac, two security guards watched a very large, thin box being loaded into the hold of the plane. A fork- lift driver raised the box to the level of the plane's hold. The guards moved closer. The fork-lift driver backed a little and just missed the first guard's foot.

âWatch it!' called the driver.

âI am!' said the guard. âBut you're not! That's worth millions. And don't run over my foot!

âYour foot's not worth millions!' said the driver.

From inside the plane, Amy looked across the silver-grey wing marked with the airline's sign. Up close, she could see where bits joined, like a jigsaw. Looking down at the trailers piled with baggage parked alongside, Amy wondered where you'd hide the painting if you stole it. Men were busy loading the passengers' bags and cases. The fork lift driver was reversing after placing the box in the hold.

âMust be very valuable to have two guards looking after it,' said Amy. âRembrandt was a famous painter wasn't he?' Christopher was keen on drawing people, places and clues to mysteries.

âVERY famous,' agreed the attendant whose WILLIAM name tag was brightly polished .'And his paintings are very valuable now.' William stowed their bags in the overhead lockers. âD'you need anything from these?' As the twins shook their heads, he stretched up, his perfectly pressed shirt sleeves looking sharp as knife edges. Everything about William was perfectly polished, pressed or smelled of after-shave. His white teeth were like TV toothpaste commercials. Not a hair was out of place. Even his eyebrows looked combed. Apart from his smile, which was real, he could have been a robot, thought Christopher. William the robot cabin attendant, programmed to fly to Tokyo.

âHow valuable?' asked Amy. Money interested her. Especially when she didn't have much herself.

âPriceless. That's why the Museum employs those security guards. They go everywhere with that Rembrandt. Every transit stop, they're last on and first off the plane,' said William.

âDoes the painting need a ticket? âAmy and Christopher travelled half price because they were under twelve. They were also U.M.s which is why

William had escorted them on board first. Unaccompanied minors were looked after by the airlines.

William smiled. âNot exactly. Although there are documents that have to be checked. Museums loan art works to each other. There's a special display in a Tokyo gallery soon. The guards have to make sure the artworks aren't stolen in between.'

Christopher noticed that he said artworks, with an âs'. Perhaps there were others on board besides the Rembrandt.

âA bit stupid to pinch a painting when you're in the air. Nowhere to hide it.'

Amy giggled. âUnless you dropped it with its own parachute. Then it might hit a bird or snag on a tree.'

Christopher had been thinking about the money. The guard had said millions.

âIf there's only one of something, like that Rembrandt and it's priceless, how much do insurance companies pay if it gets stolen or damaged? â

Christopher worked out that William wasn't programmed for that answer. A malfunction by the cabin attendant robot!

âNow, move into your aisle seat Amy. You're not in that window seat Christopher. We need to be able to get you out quickly, if anything happens.'

âAunty Viv is always afraid we'll crash, but we're not worried about that. She always says we should swim backstroke if we crash in the water. It's easier to keep up for a long time. She taught us backstroke.' Afraid-of-Flying Aunty Viv looked after them when their parents were working.

William smiled. “We're flying over a lot of water. But we won't crash. All the crew have to do safety courses regularly.' Aunty Viv would say the need for safety courses proved flying was dangerous.

Amy moved to her proper seat, still thinking about artnapping. âHow would the thief would know which painting to take? And where to sell it?' âPut it this way.' William looked at Amy. âEver heard of the Mona Lisa? It's the painting of that lady with a strange smile.'

The twins nodded. Once Amy had a Mona Lisa post card. âIf you were a thief, what could you do with the stolen Mona Lisa? â asked William as he checked their seat belts. Then he looked at his list. His brain seemed programmed to do three things at once. And his teeth kept smiling while his eyes darted, noticing everything.

The twins shrugged. âEverybody would know where the painting came from. So you couldn't show it to the public. You'd be caught straight away.'

âBut if you were a millionaire collector who wasn't too fussy about the law, you'd pay the thief a fortune, then put the Mona Lisa in your own room and look at it, whenever you liked.' William ran his finger down the list.

âWhat's the use of that?' Amy liked to show her phone card collection to anyone who'd look. âSome collectors are obsessed with collecting particular artworks. But today,

I only collect U.M.s like you .' William ticked their names on his list. âYour aunt filled in all the right forms for you, but her writing is ... er... .'

Aunty Viv was different from other aunts. She ran âAnimal Actors' which provided animals for TV. commercials. The twins helped with the animals when they stayed with her. That was quite often, whenever their parents were working overseas. They were used to being U.M.s. They'd travelled all over the world to meet their parents who were eco-photographers. Mum and Dad âshot' endangered wildlife,but only with their cameras. The last passengers were coming onto the aircraft now.

âSee you in a few minutes. Okay?' Just as William left them to attend to the other passengers, Christopher asked, 'Any chance of going up to the cockpit, later, William?'

It was worth a try. They'd been up with the captain once before on a Singapore- Sydney flight.

Amy knew what that meant. Seatbelts and lots of going up, down and sideways. Like Luna Park. Ace. She dug into her pocket to check. Yes, she had her phone card collection safely held by a rubber band. Later, she'd look at them.

Just then, two passengers stopped alongside her seat. A silver chain was wound around the wrist of one man. It dangled down, catching the light. And there was a tiny padlock! Amy nudged Christopher and pointed. The light glinted on the chain.

Was the man handcuffed? Or was he just chained to the bag?

The twins would soon find out.