Read As Good As It Gets? Online

As Good As It Gets? 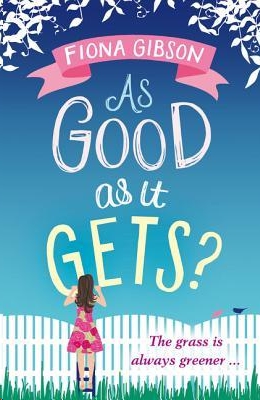 An imprint of HarperCollins
Publishers
Ltd

Fiona Gibson asserts the moral right to be identified as the author of this work.

For Jane Parbury with love

Reading on for an Interview of
Fiona Gibson

Happy Valentine’s Day! Sorry this is late. You see, a few of the girls at work got flowers today and that made me think of you.

It also made me wonder why your phone number’s unavailable. Perhaps it’s broken? And maybe you’ve injured your hand and haven’t been able to write? If so, I sympathise. I know you don’t handle pain well. I’m still smirking at the memory of you being agonisingly constipated after wolfing that massive bag of toffees on the train to Amsterdam.

Surely, though, phone issues aside, you could have got in touch somehow? You know – just to tell me you’re okay and haven’t died (maybe you ARE dead? But then, wouldn’t someone have tracked me down and let me know?). In fact I don’t really think of any of that. You know what I do think? That you’re scared, Fraser. You’re a terrified boy who – despite all your promises – has decided to run away.

Honestly, I didn’t expect this from you. ‘It’ll be fine,’ you told me, that day when we drove down to Brighton. ‘It’ll be amazing. I’m so happy. Please don’t worry about a thing.’ Do you remember saying all that? The ensuing silence suggests you were lying through your very nice, very posh teeth.

So I’ve made a decision. I’ve stopped hoping you’ll get back in touch at some distant point and throw me a crumb of support. I’m not scrabbling around like a fat pigeon, waiting for your scraps. You were right – our baby and I will be just fine. We don’t need you.

PS Actually, I wish I could be a pigeon for just long enough to shit on your head.

I hope this finds you well. My name is Arlene Johnson and I am Fraser’s mother. After receiving your charming letter he wishes to have no further contact with you. I trust you will find both the enclosed cheque and small gift useful, and sincerely hope that there will be no further correspondence between yourself and my son. Please remember that he is only 19 years old and has a promising future ahead of him.

That was kind of you, trying to pay me off. Thanks, too, for reminding me of Fraser’s age. I am aware of how old he is. I’m only 21 myself and some might say I have a promising future too. The last time I saw him, we drove down to Brighton in the middle of the night and sat on the seafront watching the sun coming up. He seemed very happy about the baby. We both were. It might not have been planned but we decided we could make it work and that we wanted to be together.

Obviously, he’s had a change of heart. I’d be grateful if you could ask him to contact me. I know he’s a very capable boy and I’m sure he could manage to write a letter himself instead of getting his mummy to do it for him.

Enclosed: 1 torn-up cheque. Perhaps you could use it as confetti, when Fraser marries a more suitable (preferably un-pregnant) girl?

‘Hey, beautiful!’ the blond boy yells, nudging his friend. They watch, admiring, as the shopping crowds mill around us. There are more glances as we walk: some fleeting, others more direct. All this attention isn’t for me; Christ no, that hasn’t happened since Madonna vogued in a gold conical bra. Even then, it pretty much amounted to a bloke up some scaffolding yelling, ‘Your arse looks like two footballs!’ I’d adored
my stretch jeans until that sole cruel comment killed the love affair stone dead. Not that I’m the kind of woman to take any notice of construction workers’ remarks. I mean, I’ve only festered over it for
twenty-three years …

Anyway, of course it’s not me who’s causing virtually every young male in this over-heated shopping mall to perform a quick double-take. I am thirty-eight years old with wavy, muddy brown hair that’s supposed to be shoulder-length but has outgrown its style, yet isn’t properly long – it’s just long-ish. That’s what my hair is:
ish.
I am also laden with copious bulging bags, like a yak. Judging by the odd glimpse in mirrored surfaces, I note that I have acquired a deathly pallor beneath the mall’s unforgiving lights. I also have what the magazines term ‘a shiny breakthrough’ on my nose and cheeks.

The cruel lighting, of course, is not detracting from my daughter Rosie’s beauty. Leggy and slender, with a cascade of chestnut hair which actually
gleams
, like polished wood, she’s marching several paces ahead, lest someone might assume we’re together. Faster and faster she goes, on the verge of breaking into a trot, while I scuttle behind, tasked with carrying the shopping. Incredibly, Rosie doesn’t seem to notice the glances she’s attracting from all these good-looking young males. Perhaps, when you’re so often admired, you simply become immune to it.

I stop, dumping the bags on the floor and checking my hands for lacerations while she courses ahead. ‘Rosie!’ I call after her. ‘Rosie – wait!’ While there are no open wounds, I have acquired a callus on my left palm from lugging Will’s birthday presents through the mall. Sure, I could have bought them online, but when we stumbled upon a closing down sale earlier, I couldn’t resist grabbing a quality turntable, headphones and speakers (yes, I am transporting speakers – i.e., virtually
furniture
) at bargain prices.

At first, I comforted myself with the thought that my husband will enjoy unearthing his vinyl collection from the loft, and be able to re-live those heady, music-filled evenings of his youth. Now, though, I’m concerned that Will, who’s been without gainful employment for six months, might view my purchases as ‘something to fill your copious spare time’-type gifts – i.e., faintly patronising, and not something I’d have thought of buying when he was busy being a senior person with an environmental charity. It’s his birthday tomorrow; he’ll be forty-one. I have already stashed away a blue cashmere sweater and the delicious figgy fragrance he likes. Maybe that was enough. I don’t want him to think I’m festooning him with presents because I feel sorry for him … oh,
God
. Things were so much simpler when he went off to work every day, either by Tube to his Hammersmith office or off in his car to some marshy bit of London, with his waders and big waxy jacket stashed in the boot. He doesn’t even have his own car anymore. He sold it, saying, ‘I don’t need it, do I? So what’s the point of keeping it?’

‘Better for the environment anyway,’ our son Ollie added, in an attempt to cheer him up.

Through the shopping crowds I glimpse Rosie in her baggy red top and skinny black jeans which make her legs even longer than they really are. They are limbs of a foal, or a sleek gazelle. She canters past Gap and Fat Face with her hair billowing behind her before performing a swift left turn into Forever 21.

Please, no –
not
Forever 21. The shop is vast, almost a city in itself, with its own transport system (about fifty escalators) and populated by millions of hot-cheeked teenagers snatching at skirts in sizes that didn’t even exist (six!
four!!
) when I was that age. Size ten was considered tiny then. I’m what’s commonly termed a ‘curvy’ fourteen: neatish waist nestling between ample hips and sizeable boobs, which aren’t quite the blessing one might imagine. In the wrong kind of outfit, they make me look as if I have one of those huge German sausages – a
kochwurst
, I believe they’re called – stuffed up my top. Or a bolster, like you find on posh hotel beds. Those weird cylindrical pillows you never know what to do with and end up throwing on the floor. Chest-wise, I have to be careful with necklines so as to avoid a stern matronly look. Yes, a big rack can be sexy in the right context. Too often, though, it gives off an ‘I am unfazed by bedpans’ sort of vibe.

I peer through the enormous glass frontage of Forever 21. It’s packed in there, virtually a scrum, as if these highly-charged girls are terrified that the supply of sequinned T-shirts and iridescent leggings is about to run dry. I can imagine the pained looks I’d attract if I dared to hobble in with my sacks of stereophonic equipment, never mind tried to enter the changing rooms and try anything on. They’d probably call security and wrestle me out of the building.

I hover at the doors with my bags clustered around my feet, like someone who has unexpectedly become homeless. I’ll
never
find Rosie in there. She might as well have gone to China. Another woman, presumably a mother, loiters nearby, pursing her lips and stabbing irritably at her phone. There’s also a scattering of boys and men, all waiting, presumably wondering what the heck their girlfriends and daughters have been doing in there for eighteen hours.