Read As the World Ends Online

As the World Ends 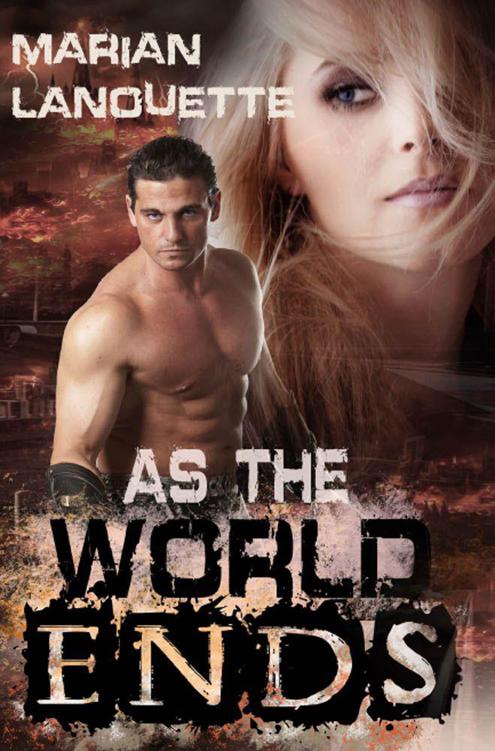 “Lanouette… Knows how to seize and hold the reader’s imagination.”

As The World Ends comes out in December 2012 and I have to say if you don’t get a copy you are missing out on a simply brilliant story.

Without giving away too many spoilers the story is set around escaping doomsday, as the title may suggest. The main characters Lauren and husband Rob pack up and head into the mountains where they meet Roan who is also seeking shelter. Roan sets his eyes on Lauren and won’t stop until he has her.

The pacing in the story is fantastic. There is enough detail to really pull you into the story and the action which made the pages flow by. I really liked the character of Lauren, wanting to leave but needing to pack make-up, I would probably be exactly like her. The male characters were very well developed, Rob…. DAMN!

I love the way Marian writes and this novella has made me want to read her other work. I highly recommend this story for all who enjoy a good romance and escapist story.

All names, characters, places and incidents in this book are fictitious, and any resemblance to actual persons, living or dead, is purely coincidental.

If I Fail, A Jake Carrington Mystery

In loving memory of Brian Allen

Thanks to Judy Roth for the great editing and suggestions. As always to my critique partners, Gail Chianese and Mandi Casey love working with you two. A special thanks to my beta reader Carol Miller. Great catches, Carol.

And a big thank you to Brenda Piel, Apieling Pictures, LLC for making me look so good.

“It was a rough day. Keila acted like a total ass today. I couldn’t wait for the day to end and come home. How about you? How was your day?” Lauren asked her husband, Rob.

“Pretty much the same,” he muttered.

Unbuttoning her blouse as she got ready for bed Lauren turned to Rob with a mischievous grin and said, “Do you want to end it on a high note?”

“I always want to end it on a high note.” He grinned back at her.

A seductive smiled played across her lips. “Okay, you take the top.” She laughed, jumping up on their bed.

An explosion rocked not only their room, but the whole house just as she landed on the mattress. “What the hell was that?” she screamed, pulling on her robe as she ran after her husband as he shot out of their room.

“I don’t know, but it wasn’t inside the house. Stay here…”

“The hell I will,” she yelled, following him out the front door.

The city block where they lived looked like a bomb had gone off. She grabbed her neighbor’s arm. “Do you know what happened?”

“Anyone hurt?” she asked.

“I don’t know, I just don’t know,” her neighbor, Kent said, walking away from her in a daze.

Lauren increased her speed as she tried to catch up with her husband. Drawing the robe tighter around her body she slowed her pace to listen to her husband as he spoke to one of the cops who’d recently arrived on the scene.

“Did someone set off a bomb?” he asked.

“What the fuck’s going on?” Lauren shouted, grabbing Rob’s arm.

He put his arms around her and said, “I don’t know, honey.”

The older cop spoke in a dire tone. “Supposedly, today’s the end of the world. You know the thing everyone’s talked about for the last two years.”

Looking at the cop like he had two heads she wondered what thing. Rob rubbed her back to calm her down though it didn’t help. She needed time to think.

“Seriously, what do you mean?” Rob said.

“Today is December 21, 2013. You never heard of the Mayan Calendar and the end of the world prophecy?”

“I have, but their predictions were for last year on this date. And nothing happened. It’s all a myth,” Rob stated.

“This isn’t the only explosion tonight, and the power is out in twelve states.”

The veraciousness of his statement was frightening. The end of the world was just words crazy people spouted. Weren’t they? Lauren never in her life gave it a thought. Surrounded by the aftermath of each explosion she understood the enormity of her error.

Rob whispered in her ear, “Let’s head home and pack what we need.”

“Need for what?” She quivered.

“Where do you think we’re going to go?” A cold shiver ran down her spine.

“Away from these houses, hon. The gas line comes into every one of them, including ours. First thing I need to do is turn off the gas. Next, we need to get the SUV out of the garage and pack up some warm clothes, food, blankets, canned goods and the likes.”

She stared at Rob, trying to read him. It dawned on her, he was serious. “Oh my God, this can’t be happening, Rob.”

“It is, so let’s hurry. I know exactly where we’re going to go.”

Once they got back to the house Lauren grabbed her overnight bag, loading it with make-up, jewelry, and other personal items. Rob walked in, grabbed her bag, and started unpacking it.

“I need all that stuff.”

He looked at his wife, she was beautiful and compact. Standing only five three with curves in all the right places and a head of curly blonde hair set off by piercing green eyes. For him it was love at first sight. In his opinion, she didn’t need make-up to look good. Her beauty, for the first time in his life, scared him.

“Lauren, we’re going to be roughing it, and if things get as crazy as I think, I don’t want you looking great and attracting attention. This isn’t going to be a short-term thing. If all that myth crap is right, this isn’t only the end of the world as we know it, it’s a new beginning. Only the strongest will survive.”

“Are you trying to scare me, Rob? If you are, you’re doing a good job of it.” The floor rocked under their feet, throwing them off balance. Rob grabbed for her and the counter at the same time.

“Hurry, Lauren, we’re not safe here, please leave the make-up, grab the stuff you need for personal hygiene and hurry. I’ll meet you in the kitchen. Grab my swimsuit and sweats and some sweaters and do the same for yourself—it will be cold and damp at night where we’re going, but hot during the day.”

It looked like Rob’s obsession for the outdoors would pay-off. He loved scuba diving, rock climbing, cave exploring, camping, and skiing; you name it, Rob did it. Hopefully, with his knowledge and Air Force training, they would survive.

After she finished packing the items he told her to, she ran down the stairs. In the kitchen she met up with him, helping to load up bag after bag with canned goods. On the way out, she remembered to grab the can opener and some forks and knives.

When they’d loaded the SUV to capacity, they locked their front door and drove down the street. It took some maneuvering on Rob’s part to work their way around the emergency vehicles and the neighbors, but his skills at the wheel paid-off.

“Rob, we’re not coming back, are we?” she asked, the tears stinging her eyes.

“They’re just things, Lauren. As long as we have each other, that’s all that counts. We’ll be okay. I promise.” He grabbed her hand, brought it to his lips, and kissed it.

“I love you, Lauren. You’re all I need to survive.”

“I can’t help it. Our life…one minute it’s fine,” her voice broke as tears threatened to fall. “Everything is changing so fast. What if this is only a gas leak and they fix it by tomorrow afternoon? Won’t we feel silly for running?”

“We’re not running, Lauren. We’re being smart. If it is a gas leak, and they fix it by tomorrow afternoon, then we head home and laugh about our adventure tonight. It’s one of the reasons we locked the front door.”

As he drove, Lauren studied her husband. A big guy, he filled his seat well. It’s true, she thought, opposites do attract. The first thing she’d noticed about Rob was his dark wavy hair. He kept it a little too long, touching his shoulders, his rebellion of sorts. At six one, his athletic body still turned her on. A body, she knew he worked hard to maintain.