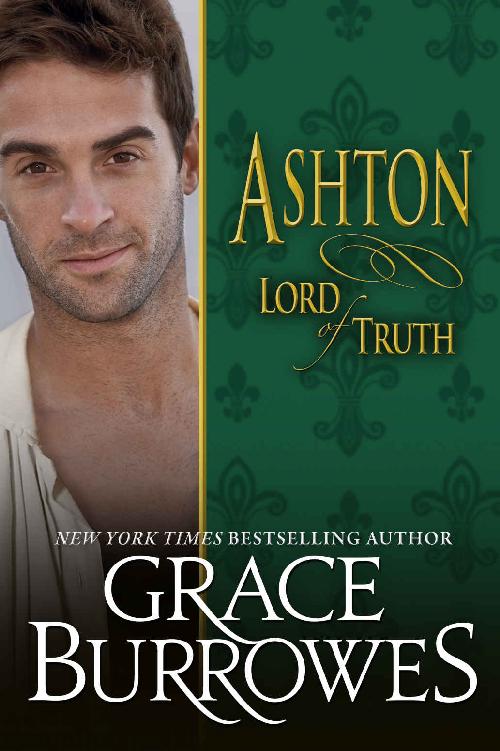 All rights reserved. No part of this book may be reproduced in any form or by any electronic or mechanical means including information storage and retrieval systems—except in the case of brief quotations embodied in critical articles or reviews—without permission in writing from its publisher, Grace Burrowes Publishing.

Ashton: Lord of Truth
is Published by Grace Burrowes Publishing

“I am the bastard,” Ashton Fenwick said. “I am the charming, firstborn bastard, and I’m good at it. Now you want to wreck
everything. Is this your idea of fraternal loyalty?”

Ewan had the grace to look abashed. “As a matter of fact, it is. You will make a fine earl.”

His rejoinder came in accents that were nearly Etonian—baby brother had attended public school—while the dialect of the Borders lurked beneath
Ashton’s every syllable.

Alyssa remained silent on the red velvet sofa, wearing her
don’t make me cry
expression. The absolute unfair hell of it was, when
Ashton’s sister-in-law looked as she did now—eyes glistening, gaze resolute—he was nearly moved to tears himself.

“I will make no sort of earl at all,” he said, pacing the length of the estate office. Because the estate belonged to the earl—not to
Ashton—the chamber was spacious and the carpets thick enough to muffle his boot steps. “I stink of horses more often than not. I swear in at
least four languages, I am ever so fond of a wee dram, and I am not the
perishing, sodding, bedamned earl
.”

Ashton had raised his voice, a Scotsman’s prerogative when making a point to another hardheaded Scotsman.

“You have enumerated at least three characteristics of the typical lordling,” Ewan said. “A titled man also, however, sires progeny on
command, and that I have failed to do.”

Ashton sent Alyssa an accusing glower. “I heard a sniffle. We’ll hae none o’ that snifflin’ in this discussion. A countess doesna
sniffle.”

“I don’t care if you’re the bloody Duke of Argyll,” Ewan retorted, marching up to Ashton. “You do not address my wife in such
a fashion.”

Ewan was an inch shorter than Ashton, probably the besetting disappointment of his lordship’s handsome life. Though Ewan was the younger brother,
he’d been raised to become the earl, and his skill with a verbal command was impressive.

“You even sound like an earl,” Ashton said, patting his brother’s lacy cravat. “You have earl hair, while I resemble a two-legged
black bear.”

One blond eyebrow lofted to an angle only a titled fellow could achieve. “Have you been drinking, Ash?”

“Of course, I’ve been drinking. A wee dram makes life rosier, so I’ll just help myself to one now.” Ewan hadn’t offered him
libation, because Ashton wasn’t quite a guest at the family seat, and yet, he wasn’t entirely family, despite being Ewan’s full brother.

Alyssa exchanged a look with her husband that conveyed love, pleading, and more than a little pain. Ashton ignored that glance, filled two glasses with the
best whisky the estate had to offer, downed both, then refilled them.

“To the earl.” Ashton recited the toast he and his brother had been making for years.

“To the earl,” Ewan echoed, his weary tone plucking at Ashton’s last nerve.

“Why bring this up now?” Ashton asked. “You’ve sat on this information for months. Why do you choose now to ruin my future?”

The question was genuine, which made it that much more heartbreaking.

“Ewan, you were raised to value all of this,” Ashton said, sweeping a hand in the direction of ornate pier glasses, intricate plasterwork,
exquisite landscapes, and delicate gilt chairs each of which was worth more than Ashton’s best horse.

“You were raised to value it as well,” Ewan retorted, setting his barely touched drink on the sideboard. “Most people would have the
sense to value beauty, comfort, and security.”

“Why value what you know you can never have? I was warned over and over by every tutor and headmaster that I had to make something of myself, that
nothing would be handed to me.”

“And yet, Ashton, you were given an education, a roof over your head, love, a place to call home, skills, and above all, freedom to follow your own
direction. As the only legitimate heir, I was wrapped in cotton wool, chaperoned, and lectured until I was nearly mad with it.”

Ewan strolled to the window—no pacing about for him—as if mesmerized by a view of southern Scotland he’d had nearly thirty years to
study. Thanks to a river that changed course every hundred years or so, a portion of the estate touched into England. The previous earl had considered
diverting the river to rectify that disgrace.

“Tell him, Ewan.” Alyssa’s voice was husky, as if she’d already endured a bout of tears. “If you don’t, I will.”

The whisky curdled in Ashton’s gut. “Is somebody ill?”

He loved these people as only a lonely Scotsman could love his two extant immediate family members. Ashton and Ewan had lost one sister to influenza and
another to a lung fever within weeks. If Ewan or Alyssa were unwell—

“Not ill,” Ewan said. “But in a delicate condition, nonetheless.”

Ashton dropped onto the sofa beside Alyssa. “Now that’s a fine thing. You had me worried when I should be rejoicing. I’ve never been an
uncle before, but I’m sure I’ll get the knack of it. Spoiling a wee niece or nephew is what uncles do best, and now that you’ve given me
some warning—”

Alyssa put her head in her hands. “Ewan, make him understand.”

Ashton shut his mouth, because when Alyssa Jean MacDermott Fenwick took to pleading, the end times were surely nigh.

“Alyssa has conceived before,” Ewan said, back to the room. “We’ve lost the child in the early days all three times. This time
seems to be going better.”

Currents swirled about the elegant office, entirely human currents of anxiety, hope, and heartbreak. Some forms of wealth, not even a title could buy.

“Tell him the rest of it,” Alyssa said.

“There has been talk,” Ewan went on, fiddling with the red velvet tie holding the curtains in their precise, elegant folds. “Mama’s
old nurse has grown feeble-minded, and she wanders. Gunna found her way to the pub last summer and began reminiscing. Her sister, who is still quite sharp,
didn’t contradict her, and the talk hasn’t gone away.”

“We’re in Scotland,” Ashton said, patting Alyssa’s hand. Her fingers were cool, and now that he was next her, she struck him as
pale. “People will talk when they’re not vying for a spot on the sinner’s stool.”

Alyssa winced at his reference to fornication, but without that particular vice, the stool at the front of the kirk would get a good deal less polishing by
penitential backsides.

“The problem, brother, is that the talk is true. Alyssa was in the attics rummaging among the nursery trunks, and she found Mama’s diary, from
when Mama and Papa eloped.”

“Diaries can be falsified.”

Even as he spoke, Ashton felt the weight of doom closing in on him. A small Scots community thrived on gossip. In the nearby village of Auchterdingle, the
elders still made mention of the mule that had given birth three years after the Forty-Five. The offspring had been named Jesus, and its arrival had been
taken as a sign that Bonnie Prince Charlie’s triumphant return was imminent.

That had been more than seventy years ago, and the miraculous mule was still frequently toasted. A potential scandal in the earl’s family would
never, ever cease being a topic of speculation.

“If I am legitimate,” Ashton observed, “which I am not, then Mama and Papa were married at the time I was born. Mama would have been
sixteen, a mere girl by English standards, and Papa not much older.”

“They were in love,” Ewan said, taking a seat at the estate desk. “And in Scotland, unlike England, a sixteen-year-old woman need not
have her parents’ blessing to marry.”

“I’ve been in love a time or two,” Ashton said. “Then I wake up with a sore head, and the affliction has passed.” He’d
been infatuated countless times, until the infatuations had run together, into an abiding fondness for all of the ladies.

“Mama and Papa were passionately devoted,” Ewan went on. “Prior to your arrival—and prior their setting up a household out on the
isle of Rothsay—they managed a quiet little wedding. By the time Mama’s family caught wind of her whereabouts, that household had three
children. At that point, cousin Hugh and cousin Leith had gone to their rewards, and Papa had become the heir apparent. He went from being an unsuitable
Scottish upstart to a Border lord’s heir.”

And that Border lord had become increasingly wealthy as the years had gone by, to the extent that Papa had apparently become
eligible
in the eyes
of the English side of the family.

Alyssa rose and perched on the arm of Ewan’s chair. They were a striking couple—both tall, well-favored, and fair, and their marriage had been
a love match. Ashton hoped it still was, but this business of the succession had apparently put a strain on the relationship.

“Everybody was sure your papa would abandon his scandalous liaison with the Irish earl’s wayward daughter, and marry a proper
Scotswoman,” Alyssa said, “one who’d bring wealth and standing to the union. Instead, after much argument with the old earl, your papa
and your mama had public ceremony with her family in attendance. She was of age then even by English standards. Her family was relieved, for who else would
marry a woman ruined by a Scottish rogue?”

Such a romance belonged among Sir Walter Scott’s drivelings. “Why not reveal the earlier marriage before the public union began?” Ashton
asked. Why deny Ashton and his sisters legitimacy when it might have made a difference?