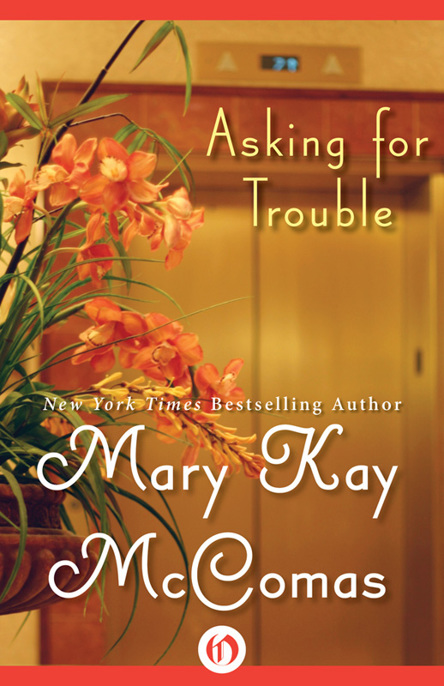 Betty Godbey, who plucked me out of the Perry horde and made me feel like someone special.

And Jean Rhines, who was there when I needed her the most and when my mother couldn’t be.

My love to Pa Kettle and my favorite Mason as well. ...

A Biography of Mary Kay McComas

“W
ASN’T LIVING IT BAD
enough? Why do I have to talk about it?” Sydney Wiesman asked her best friend, Judy.

“Because you’ve got to. It’s part of the deal.”

“I’ll give back the money.”

“You signed a contract,” Judy said. In a low, reassuring whisper, she added, “Besides, this is your chance to find out how he really feels. Maybe he doesn’t hate you.”

“Maybe he does. Maybe he’ll tell the whole world how much he hates me.” Sydney moaned, wishing she’d never been born.

“You ready, Ms. Wiesman?” a young man wearing a large set of headphones asked, looking not at Sydney but at the clipboard in his hands.

“This is it, kiddo,” Judy tittered in her ear, as she gave Sydney an enthusiastic hug. “Smile. It’ll be fun. Really. And if he does get nasty, don’t sit there like a ninny and cry. Fight back. There were two of you on that date, you know.”

“You think he will? Get nasty?” Sydney asked, suppressing the wail in her throat as she watched her friend scurry away.

Judy turned, backing her way along the long corridor. “No. I don’t think he will. Stop worrying.” She opened a door about halfway down the hall and disappeared inside.

“Do I really have to go through with this?” she asked the young man with a beseeching voice. “Isn’t there some way to get out of it?”

He looked at her and grinned. “Come on, Ms. Wiesman, relax. Seven minutes, eight tops. You can do it. Don’t worry.”

Stop worrying? Don’t worry? That was like telling Sydney not to breathe. Some people skied. Some people took up jogging. Her sport was worrying. She was an Olympic worrier. She could have had a career as a professional worrier. And at the moment, she was very, very nervous and very, very worried.

Sydney sighed, hard. Then she sighed again. Her stomach was so tight, she could play a drum solo on it.

“Okay, Ms. Wiesman. Just stand there and smile into the camera. Just the way we rehearsed it,” the young man was saying before she realized that he had propped her up in front of a pale pink backdrop, that her segment of the program was about to begin, and that it was too late to back out.

“Oh, dear Lord,” she prayed in despair, her hand on her stomach as it threatened to bring back up everything she’d eaten in the past year.

“Relax,” he said again, “Rex’ll take care of everything. He’s done this hundreds of times, and he’s a nice guy. He won’t let anything awful happen to you. Now, after he introduces you, you turn and walk ...”

Sydney listened to him review the stage directions for her, but only halfheartedly. She couldn’t help but wonder if Tom Ghorman was as nervous as she was. The man had plagued her thoughts during the two weeks since their date. The worst of it was, she was more than a little disappointed their date hadn’t worked out. She’d liked Tom instantly. She’d actually felt herself falling in love with him a little. And then the world had simply come apart at the seams and destroyed any possibility for a relationship.

“Welcome to
Electra-Love
... ,” she heard the recorded announcement begin.

“Oh, dear Lord,” she began to pray again—for an earthquake this time.

“... The game show where the whimsies of love meet the logic of technology, and where all the personal details of a first date are aired on nationwide television. Now, here’s your host, Rex Swann!”

Sydney watched Rex Swann descending the steps at the back of the set. This was his third entrance for the day. With a change of clothes and a touch-up to his makeup, he was as fresh and energetic looking as he had been the first time.

The audience clapped and cheered on cue, and Rex greeted them with words she was too tense to comprehend. She looked back at the camera in time to see the red light go on. Again she sent a prayer heavenward.
Please let the tightness around my mouth be a smile, not a grimace.

“Let’s welcome our first guest,” she heard Rex say. “She’s a CPA who enjoys sailing and long walks on the beach. She loves to dance and she’s willing to try anything once. She’s looking for a man with something to say, and her name is Sydney Wiesman. Come on over here, Sydney,” Rex said, holding out a calm, stable hand to Sydney.

Like a well-programmed robot, she turned away from the camera and automatically began to walk toward Rex Swann. He was a handsome, affable-looking man with a good-natured twinkle in his eyes. The sort of man one felt compelled to trust. He took Sydney’s hand.

“How are you doing, Sydney?” he asked in a low, confidential voice.

“I think I’m going to throw up,” she whispered.

“No. No. Don’t throw up,” he said in a voice that was only slightly louder, but which most certainly could be picked up by the sound boom overhead. “There’s nothing to be nervous about. Take a seat.”

He pulled her over to center stage, to the rose-colored chair and loveseat where she would have to retell her nightmare. He patted her hand and smiled charmingly, sincerely concerned with her discomfort.

“Now, Sydney. You said you wanted a man who had something to say. What did you mean by that?” he asked, his smile encouraging.

“Well, sure,” he agreed. “We all know what it’s like to be out after dark with the brain-dead.” The audience laughed, and he gave them a wry smile. “You like to sail, take long walks on the beach, and dance. Would you say that you’re a little bit of a romantic?”

“So, you’re looking for a romantic man with a brain. What about a sense of humor, Sydney?”

“That’d be nice too, Rex,” she said, wondering how Tom Ghorman’s sense of humor had held up over the past couple of weeks. It was one of the things she had especially liked about him.

“Okay. Well, let’s take a look at the men Sydney had to choose from, and then we’ll find out who she chose and what happened on their date.”

“First there was Broylin, a motorcycle enthusiast, who says he prefers women with thick thighs and a lot of money,” Rex read from the cue card, chuckling gleefully. A video of the monosyllabic Broylin saying basically the same thing played on the big screen.

“Then there’s Humphrey. He’s an avid birdwatcher and performs magic tricks as a clown for children’s parties in his spare time. He wants a woman who can sit quietly for long periods of time without having to go to the bathroom, and here’s why ...”

Humphrey explained in a whiny voice how his dream woman was someone who could share his interest in bird-watching. His description of her would have better fit a rock.

“And then Tom, who says he’d like to start a family, if he could find the right woman to start it with,” Rex reported. “This is what Tom’s looking for ...”

“I’d like to meet a warm, gentle woman who likes kids and who wants to share a life with someone like me,” he said openly and honestly. “She could either pursue her career or stay home and raise the children, whichever made her happiest. But I think she’d have to be a very understanding person, because my profession can sometimes be a little stressful, and, well, she’d have to try to understand it.”

That was all she’d known about him when she’d picked him. She knew more about him now. Understanding was indeed something he’d needed—and she had failed him miserably.

“Those are the three men Sydney had to choose from,” Rex said. “And now it’s time for the audience to vote on which of the three they’d pick for her.”

The audience laughed, called out their preferred numbers, and voted. The bright stage lights and Sydney’s nerves sent beads of perspiration trickling down her back and between her breasts.

“Now, Sydney, tell the audience and the folks at home who you picked for your date,” Rex instructed her.

On the screen behind Rex, Tom’s face appeared again, just as she’d known it would. But this time he was backstage—not two hundred feet away. Worse yet, he could see her too, on the monitor in front of him.

“Hi, Tom. Nice to meet you. Are you comfortable back there?”

“Hi, Tom,” she muttered, her heart pounding in her throat, tears seeping into the corners of her eyes. She felt a sudden sense of ... what? Relief? Well-being? And just as suddenly she knew that she’d missed him in the time they’d spent apart. She was profoundly glad to see him.

She welcomed the strange, airy sensation she got when she looked at him and the familiar fluttering of her heart when he smiled. She’d liked those feelings. She’d felt empty without them.

“Yes, Rex. I did call Tom,” she said, her words stilted from anxiety.

“Well? What’d you think of him when you talked to him?”

Sydney almost laughed. She imagined that Rex would have liked to use a cattle prod on contestants like her, even though he didn’t give any evidence of it. She looked up at Tom and took a deep breath to calm herself. She had faith in Tom. He was a nice man, a good man. He hadn’t failed her; she had failed him. But she wouldn’t fail him again by making them look like a couple of idiots on television, she decided.

“I thought he was funny,” she said, smiling up at Tom.

“Ha-ha. Tom has a wonderful sense of humor,” she said, as the muscles in her neck and back began to relax.

“Well, good. Then what happened? You got together.”

“No! Tom, how did that happen?” Rex made a horrendous face at the audience, they laughed, and then he turned in his seat to look up at Tom. “Twenty-four hours?”

Tom was grinning good-naturedly. The incident had happened early in their relationship. It was the first mishap, a simple misunderstanding that had been awkward, but not fatal. It was something they could both laugh about in retrospect.

Rex glanced at Sydney with a curious, sympathetic look on his face. “What did you do, Sydney? What did you think when Tom didn’t show up?”

“I’d gone to the restaurant Thursday night, Rex. I waited for Tom to show up. Then I finally went home and called him to find out what had happened. I thought he’d gotten cold feet and decided not to go through with it, and I wasn’t sure what to do. He felt really terrible,” she said, laughing as she remembered his profuse apologies.

Dream Cycle of H. P. Lovecraft: Dreams of Terror and Death by H.P. Lovecraft
Runaways by V.C. Andrews
A Shard of Sun by Jess E. Owen
The Case of the Poisoned Eclairs: A Masao Masuto Mystery by Howard Fast
Out of the Sun by Robert Goddard
Petra K and the Blackhearts by M. Henderson Ellis
Everything: A Singed Wings Novel by Erin Noelle
Magnificence by Lydia Millet
Karate Katie by Nancy Krulik
Vestido para la muerte by Donna Leon
Our partner