Assault on Sunrise (The Extra Trilogy) 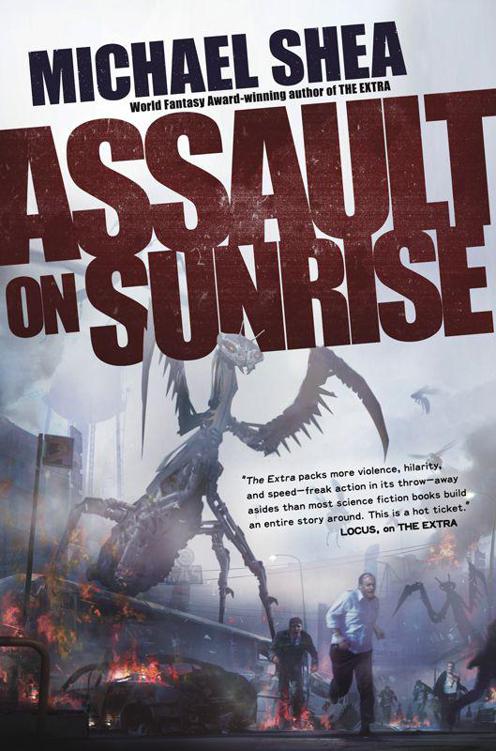 As always, to Linda

7. The View from Above

11. The Choosers of the Slain

25. Fingers Falter on the Keyboard

27. And the Dead Shall Be Raised

As the late
summer sun neared setting, Jool was working on their winter garden. Curtis came back up from town, two rolls of chicken wire in the little bed of their three-wheeler. He paused just shy of their house, an A-frame cabin they’d finished at last in just under two years. Paused because, in town, he’d heard news he didn’t want to tell her.

She was weeding, her face profiled in the golden light that shadowed the honey-colored slant of her cheekbones. He could see the low swelling of her belly, like the curve of a crescent moon. Four months along. Their baby would be a beautiful blend—his black with her buckskin hues; his frame solid, hers slender.

“Guess what.” she called. “We’ve got a visitor.” Though she said it smiling, there was something sad in her eyes.

“I think so. In a way.” And here the visitor came, loping down the path behind her: a rangy dog, vaguely Lab-shaped with longish blond fur. A big, affable fellow, all tongue and enthusiasm.

And the moment Curtis saw it, he understood what he’d seen in Jool’s face. In a heartbeat he was projected back to that morning in L.A., sitting with thousands of other extras-to-be in the bleachers outside Panoply Studio’s great wall, watching a demo of the monsters they would be facing on the set inside that wall. They’d watched a dog that looked very much like this one come to a gruesome end.

Faces and memories. Their thoughts went inward to fugues of nightmare and adrenalized turmoil they would never forget. It came naturally, then, for Curtis to tell her what he had just learned in town.

She stroked his face and sighed. The sun was just set. Below them Sunrise, in its tree line, had its streetlights on. “I’ll tell Momma and your Auntie Drew,” she said. The house they had built for those two ladies was just in the next vale over from their own. “You go up and tell Chops and Gillian. We’ll meet you for the meeting down in the hall. And this guy? We’ll keep him, right?”

She smiled. “You sure now? He’s a big eater—already finished the rest of last night’s roast.”

He smiled back. “What do you want to call him?”

Up in the
Trinity Mountains, the stars—even when the quarter moon was up—were no feeble thing. The universe was right there on top of you, a pavement of white coals. Their light lay like frost on the grassy slopes and on the grandfather pines in their thousands.

As Gillian bent to the eyepiece of their telescope, Chops watched her, her Native American hair a black so glossy that the stars struck gleams off it.

“Whoa…” she said softly, and Chops, seeing her so tenderly intent, felt a tingle of warmth.

Raising her head, she beckoned him and whispered—as if they must be careful not to disturb the distant galaxy she had just captured for them. “Take a look.”

And peering at it, he in his turn had to say, “Whoa.” It was a tiny egg of light, fuzzy round its edges with a fog of stars: the globular cluster in Orion’s sword.

Gillian, as much Comanche as Miwok, had grown up on one rez after another in Idaho, Washington, and here in Northern California—drifting with different branches of family, with friends—always preferring to live in mountains and forests on their own terms and nowhere bulldozers had made.

Sometimes she’d think of Chops as a wolf who was also her mate. A lean, smallish one, rapt now by this lens on the stars, but always ready to jump at a sound or a scent. She wanted to stroke the bristly fur on the back of his head, but held back so as not to risk startling him.

He’d been born in the Zoo, a hard life in itself. Then he’d been to prison and there suffered scars one couldn’t see. He would never hurt her, but loving him she never touched him unaware.

Gillian had quested in three different mountain ranges through the years of her adolescence. She knew how to fast and find that ghostly unity with the wilderness where hunger and physical extremity made your senses pour out of you like radiation, where all life’s personalities—clawed, fanged, feathered, scaled, and furred—sooner or later showed themselves. Where they met your eyes and let you look into theirs.

Once, a few years ago, a cougar, a well-grown female, came stepping onto a game trail she’d sat by. Such was the big cat’s beauty that when it left, Gillian believed that her wonder had canceled her fear and purchased her life.

Chops’s first quest had begun at sunup yesterday morning five miles higher in the mountains. They had reached the place where they were to diverge—for each one’s vigil must be alone. A deer trail crossed a steep open field of brush and lupen amid spruce forest.

Chops had tried to clarify his feelings toward the quest he was embracing. “I do feel open to all the living things here, but you know I’m armed.” He touched the hilt at the small of his back, his one knife, almost a short-sword. “I can’t help it. I just won’t go unarmed anywhere there’s a chance I might have to protect you.”

“Honey,” she said. “Everyone does it their own way.”

Sitting there a while before parting, just in the pleasure of being together, they could smell the lupen and ferns all around them and the forest-scent washing over them in the breeze. They watched the greens get greener, the sky bluer. The pine skirts crowding the path gave a shudder … and a big brown bear, five hundred pounds at least, came rolling forward.

Gillian knew her for a sow. Worse luck if she had cubs still trailing her—spring was not terribly far behind them after all. No cubs appeared, but the bear paused just before them. Chops seemed to find amazing depths in her little muddy reddish eyes. To Gillian’s eyes, in that moment, Chops seemed to have borrowed some of the animal’s magnificence.

The bear seemed to see only him, to find something absorbing in that rapt human form. She seemed not to register the disparity between her mass and his. And then with a direct glance at last to Gillian—a glance oddly like a courteous parting nod—the sow had turned and padded on up the trail.

Maybe it wasn’t a proper vision quest. Could you have a joint vision quest? They’d been talking it over since yesterday.

Now, as she was pointing out for Chops the Pleiades, her com purred. She clicked it on, listened, and murmured, “OK. We’re coming down.”

“Curtis is coming to meet us. There’s a big meeting, some kinda bad news.”

They capped the telescope and folded its little tripod slowly, still looking up at the stars. They wanted to stay in the peaks, not go down to the valley. But they also knew that if it was the town’s trouble, it had to be theirs too.

Coming the last half mile downslope, the couple paused to look at Sunrise. All the lights of the town were burning, the broad main drag the brightest. The half-dozen branch roads that angled up and downslope of its axis showed lesser lights—glowing windows and porch lights, some yards floodlit to protect gardens from deer and chicken coops from foxes. The whole looked like a jagged little lightning-bolt beneath the starry night.

They paused when they reached the tall new water tower, which marked the town’s upslope rim. Between it and Glacier Avenue spread an industrial fringe of wide lots and hangar-like buildings of various sizes—two lumberyards, a sawmill, a couple machine shops, the automotive repair shop with trouble lights glaring from raised hoods.

Curtis emerged from one of the alleys off Glacier and came across the weedy crackled asphalt to meet them.

“Sorry to drag you down,” he said. He hugged them.

“It all happened yesterday, and happened pretty fast. A group of guys came looking for the Rasmussens. Armed guys. And as you’d expect, some of those guys got shot. And, as it turns out, those dead guys are state cops.” Curtis let them take this in.

All Chops said quietly was, “Shit.” But Gillian knew what her mate was thinking. What they were all thinking. Just how far away do you have to go to be free?

I Hate Rules! by Nancy Krulik
Short Century by David Burr Gerrard
Within These Walls by J. L. Berg
Always Mr. Wrong by Joanne Rawson
The Governess' Examination by Tamsin Taite
White Boots & Miniskirts by Jacky Hyams
The Last Chronicle of Barset by Anthony Trollope
A Greek Escape by Elizabeth Power
Skinny by Donna Cooner
The Songmaster by Di Morrissey
Our partner