Read At All Costs Online

The tanks of the RAF planes were filled by cans of aviation fuel carried to Malta at great risk by merchant ships. Enemy pilots often buzzed the airfields and bombed the planes as crews frantically serviced them. 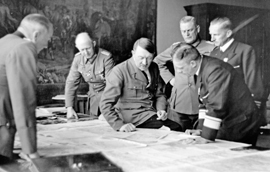 Hitler planned an invasion of Malta with Admiral Raeder, commander-in-chief of the German Navy. But at the last minute, he canceled it. “I am a coward at sea,” he said. “It was the greatest mistake of the Axis in the whole war in this theater,” said Admiral Weichold, the German commander in the Mediterranean.

The
Ohio
steamed from Texas to Glasgow, where she was turned over to a British crew, and a new master, Dudley Mason, was assigned. 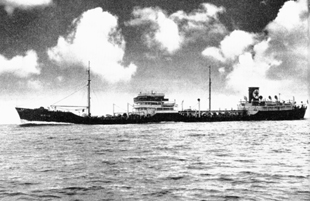 With Malta facing capitulation to the Axis, Prime Minister Churchill met with FDR and borrowed the SS
Ohio
. The Texas Company ship was the biggest and fastest tanker in the world. She was Malta’s last hope, because there was no survival without the 107,000 barrels of oil carried in her thirty-three honeycombed tanks for antiaircraft generators on Malta and the Royal Navy submarines hunting Rommel’s supply ships. 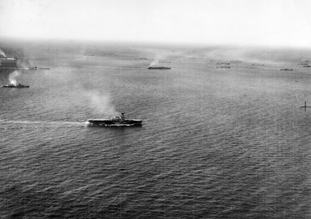 The Operation Pedestal convoy sometimes stretched ten miles wide at sea. The
Ohio
, the
Santa Elisa
, and twelve more freighters were defended by five aircraft carriers, two battleships, seven cruisers, and thirty-two destroyers, plus oilers, corvettes, minesweepers, motor launches, tugboats, and nine submarines patrolling nearby waters. As the ships passed from the Atlantic Ocean into the Mediterranean Sea, Admiral Neville Syfret, commander of the fleet, sent them a message: “Remember that the watchword is: THE CONVOY MUST GO THROUGH.” 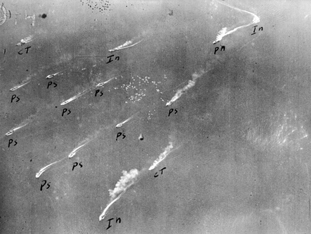 Operation Pedestal was top secret, but it was too big to hide. This Italian reconnaissance photo, taken after the convoy passed into the Mediterranean Sea, has ships marked for attack.

Warning communication is soon given, urgently flashed from ship to ship…. 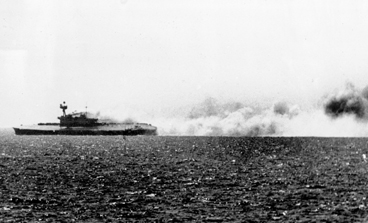 The aircraft carrier
Eagle
, serving the British Empire since 1918, was blindsided by three torpedoes from U-73. She listed to port, dumping the planes off her flight deck, and sank in eight minutes, taking 231 men down with her. Larsen and Dales watched from their battle stations on the bridge of the
Santa Elisa
—the same point of view as this photo, taken from a destroyer. “It was a pathetic sight to see as the
Eagle
rolled over. In a matter of minutes she was gone,” said Dales. 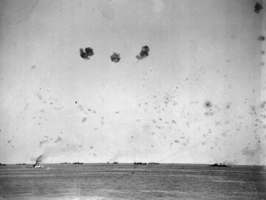 Then the air attacks began on the freighters. There were at least 540 Axis bombers and fighters on Sardinia and Sicily, all focused on sinking the fourteen merchant ships carrying vital fuel, ammunition, and food to Malta. The enemy planes attacked at all times of the day, as hundreds of guns from the convoy fought them off. “The din was unholy,” said the
Santa Elisa’s
engineer. 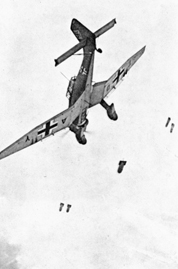 The Junkers Ju 87—Stuka for short—was capable of diving vertically at the ships, and sometimes did so. This Stuka is dropping its total payload of 700 kilograms: two 50-kilo bombs from each wing, and one 500-kilo bomb from the fuselage.

Larsen and Dales each triggered a 20-millimeter Oerlikon rapid-fire cannon on the port bridge wing of the
Santa Elisa
. Larsen shot down a Stuka dive-bomber from 1,000 yards. 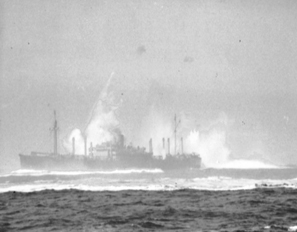 Folk Lore by Ellis, Joanne
Bitter Drink by F.G. Haghenbeck
Made with Love by Tricia Goyer
The Contest of the Century by Geoff A. Dyer
Clifford Arbor: Savouring Emily by Sam Crescent
Code 3: Finding Safety by V.E. Avance
A Journeyman to Grief by Maureen Jennings
Sharing Sisters (The Gardeners) by Moore, Lee
Moo by Smiley, Jane
The Tudor Secret by C. W. Gortner
Our partner