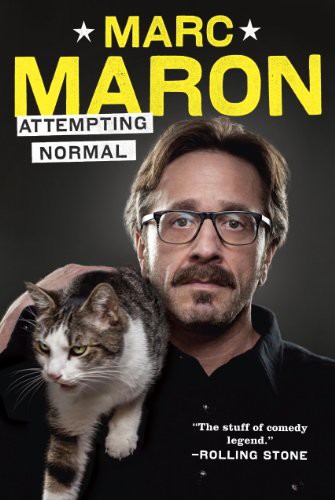 Attempting Normal
is a work of nonfiction. Some names and identifying details have been changed.

Published in the United States by Spiegel & Grau, an imprint of The Random House Publishing Group, a division of Random House, Inc., New York.

For everyone who is successfully defying their wiring

“Once upon a time called now.”

The garage is a single-car garage that hangs precariously over the edge of a hill in my backyard. When I got the place it had a crumbling cement floor and an old, tool-scarred workbench built into the side. There were holes, cracks, random nails, hammered-in rubber pads, the ghosts of anvils and clamps. A hard man had sweated over engines and machines here, I thought. I put a floor in over the cement and kept the bench as an homage to real work. I put my printer on it.

I always wanted it to be a work space. That was the plan when I bought the house. I think I was hoping it would turn into one of its own volition. But it took a couple of years, a divorce, and profound desperation before the garage became an office rather than just a place where I stored everything I have held on to all of my life.

Before hoarding became a phenomenon, people just called it “collecting” or “being nostalgic.” I don’t hoard, exactly, but I get it. It’s a response to our need and desire for purpose, order, definition,
and a fortress. It’s a calling that requires constant management, control, and obsessive attention. I am amassing artifacts from the history of me. My garage is the storeroom and temporary exhibition hall of the yet-to-be-built museum documenting the rise and fall of the Marc Age. I am the curator. I decide the meaning and worth of the collection based on my feelings in a moment. Where does this particular artifact take me now? How do I contextualize this laminated all-access talent pass from the 1995 Aspen comedy festival?

There are hundreds of books here. I am surrounded by an empire of unread and partially read books. Titles like:
The Denial of Death
(read),
A Thousand Plateaus
(God, I tried),
The Family
(Manson phase),
The Hero with a Thousand Faces
(skimmed hard),
Gravity’s Rainbow
(nope), and
The Illuminatus! Trilogy
(of course). There are several bibles,
The Aeneid, The Odyssey, The Anthology of American Poetry
. I have Freud, Reich, Barthes, Fromm, Spinoza, Plato, Hunter S., DeLillo, Bangs, Benjamin, graphic novels,
Hellblazer
comics, beat poetry, cookbooks.

I am not bragging. I am embarrassed. Most of the books I have are indicators of my insecurity. I really wanted to be an intellectual. I really wanted to understand Sartre. I thought that was what made people smart. I have tried to read
Being and Nothingness
no fewer than twenty times in my life. I really thought that every answer had to be in that book. Maybe it is. The truth is, I can’t read anything with any distance. Every book is a self-help book to me. Just having them makes me feel better. I underline profusely but I don’t retain much. Reading is like a drug. When I am reading from these books it feels like I am thinking what is being read, and that gives me a rush. That is enough. I glean what I can. I finish some of the unfinished thoughts lingering around in my head by adding the thoughts of geniuses and I build from there. There are bookmarks in most of the denser tomes at around page
20 to 40 because that was where I said, “I get it.” Then I put them back on the shelf.

There is a box full of hundreds of Polaroids. They were important in the eighties. They were art. Hockney and Warhol made them important. I was an important artist in my teens! I needed to take handheld Polaroids of myself at different phases of my life looking head-on into the camera. Different shirts, facial hair mistakes, hair ridiculousness, silly eyeglass frames, all changing over the years. Some surface manipulation. Smeared emulsion. Art. My head, documented and boxed.

There are hundreds of audiocassettes and videocassettes. Me on
An Evening at the Improv
in 1989,
Caroline’s Comedy Hour
, static shots of club sets in different cities, cassettes of sets from more than twenty years from gigs all over the country. I intended to listen to them to learn, to craft, but I didn’t really. Documented. Boxed. I lived. I talked into microphones in front of people in a lot of places over a lot of years.

There are two shelves of records. Some I have been holding on to since high school.

Notebooks. There are dozens of notebooks. I always carry notebooks with me. I scribble in them in a barely readable scrawl. I do not write jokes. I write moments. Thoughts. Fragments that I have to sweat over as if they’re cryptic texts in a lost language when I try to interpret them. That shouldn’t be part of my process—decoding my own writing—but it has been for my entire life. What does that say about me? Why can’t I make it easy? I need to complicate everything to protect myself from success and to remain complicated and overwhelmed.

I like to get things framed and to put things in small frames. On the wall: black-and-white photo of Muddy Waters,
Apocalypse Now
lobby card of Dennis Hopper, another of the cast of
Freaks
. A color photo of me and Sam Kinison; a caricature and
clipping from the
New Yorker
review of my show
The Jerusalem Syndrome;
the cover of an antidrug pamphlet showing a skull wearing a crown holding a syringe with the words
KING HEROIN
over it; the poster for my HBO
Half-hour
from 1995, featuring all the comics in the series; my likeness from the Dr. Katz cartoon; three strips from a photo booth with my first real girlfriend; a picture of my ex-wife before she was my wife, before I ruined it; a photo of me and my brother on the day of his wedding, him in a tux, me in a towel; me and my grandfather (I am wearing a Killing Joke shirt); Lenny Bruce dead and alive; the head of St. Catherine; a laminated copy of the
New York Times
article about my podcast; my father at age twenty-five; Frank Kozik’s poster for
Gimme Shelter
; Chuck Berry; a
TV Guide
crossword puzzle from 1992 with me as one of the clues: “Host of
Short Attention Span Theater
? MARON.”

Why am I holding on to this stuff? Some of this junk is losing its punch. Pictures. Pieces of paper with writing on them—I can no longer connect with the thoughts or feelings that birthed them, that drove me in that panicky desperate moment to scribble in a barely legible scrawl as if on a cave wall. All say the same thing in some form or another: “I am here. This is me in this moment.” Do I have some fantasy that this stuff will be important after I die? Do I think that scholars will be thrilled that I left such a disorganized treasure trove of creative evidence of me? Will the archives be fought over by college libraries?

What will probably happen is my brother will come out with my mother and look in the boxes. My mother will hold up a VHS or a cassette and say to my brother, “Do I have a machine that plays these?” My brother will shake his head no and they will throw it all away.

Now the only items that have immediate meaning in my garage are a new table situated in the center of the room and the microphones that are attached to it. Me sitting at that table across
from people talking to them on those microphones has changed the trajectory of my life completely.